SIOUX CITY -- Al Haynes, who guided a crippled jumbo jet to a crash landing at Sioux Gateway Airport on July 19, 1989, helping save the lives of 184 passengers and crew, died Sunday.

Haynes, who passed away in a hospital in his hometown of Seattle following a brief illness, was a week shy of his 88th birthday.

At age 57, Haynes served as captain of United Airlines Flight 232, which was bound from Denver to Chicago. After the DC-10 jet suffered a catastrophic failure of its tail-mounted engine over Northwest Iowa, resulting in the loss of all the hydraulic power and many other flight controls, Haynes and his crew were forced to make an emergency landing at the Sioux City airport. The jet stayed aloft while the pilots made a series of 360-degree turns to the right as it approached the airport. 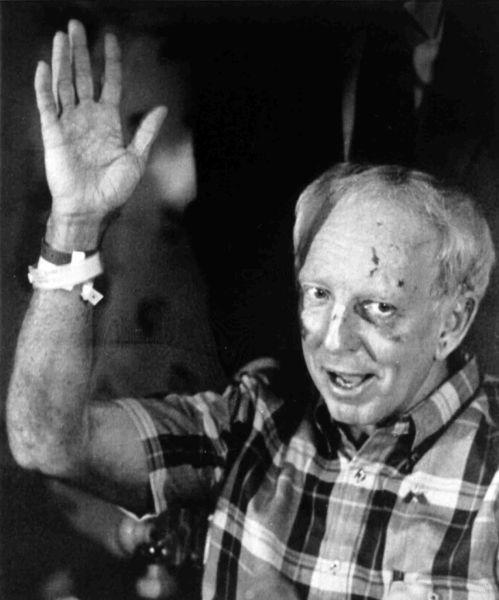 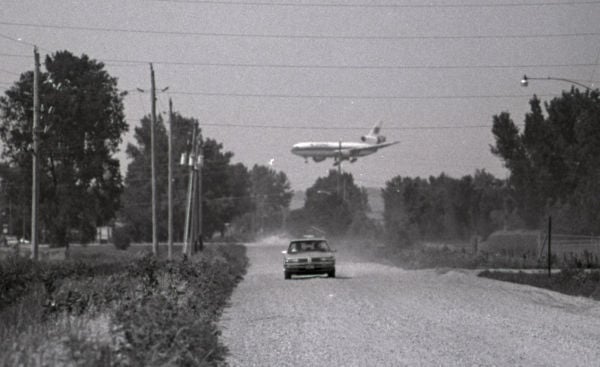 Flight 232 approaches Sioux Gateway Airport for a crash-landing on July 19, 1989. "All we had were the engines and landing gear," said pilot Capt. Al Haynes. 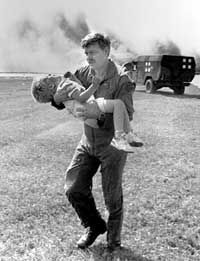 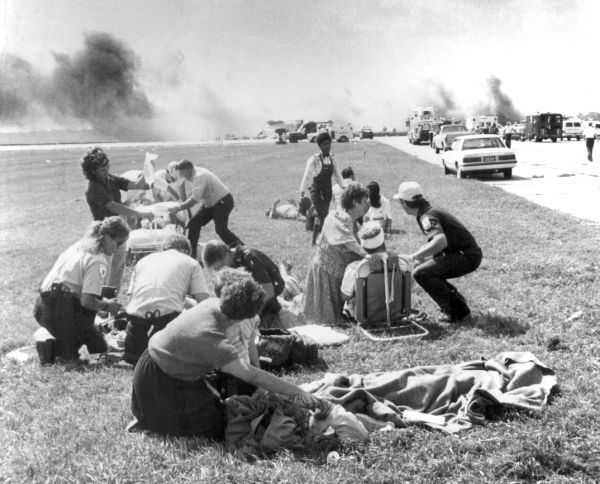 Emergency workers respond near the runway following the crash of Flight 232 at Sioux Gateway Airport on July 19, 1989, in Sioux City. 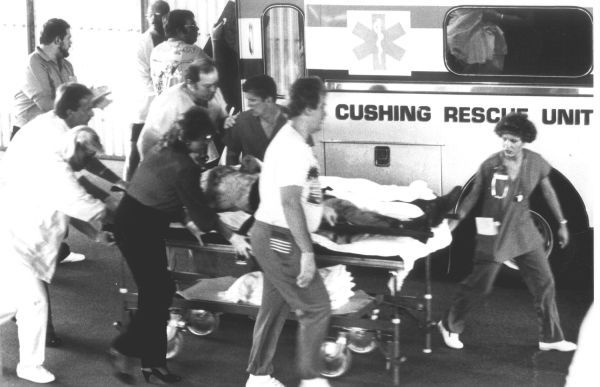 Crews transport Flight 232 victims to Marian Health Center after the crash on July 19, 1989. 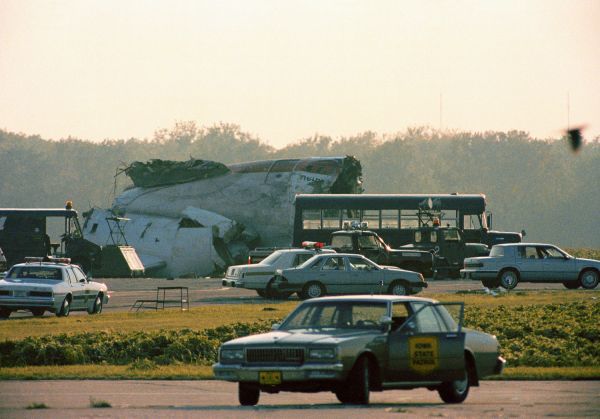 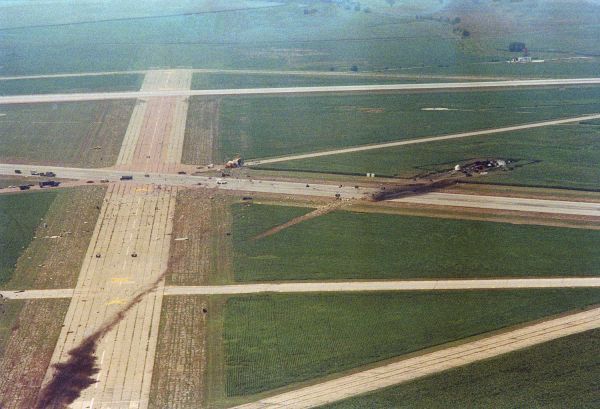 A burnt area shows the contact point and crash path of Flight 232 after it exploded on impact during an attempted emergency landing at Sioux Gateway Airport on July 19, 1989. 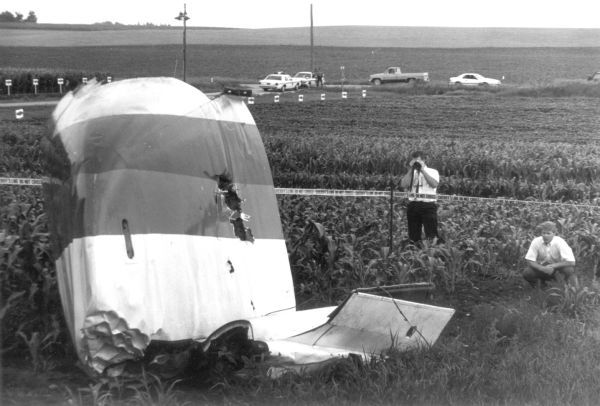 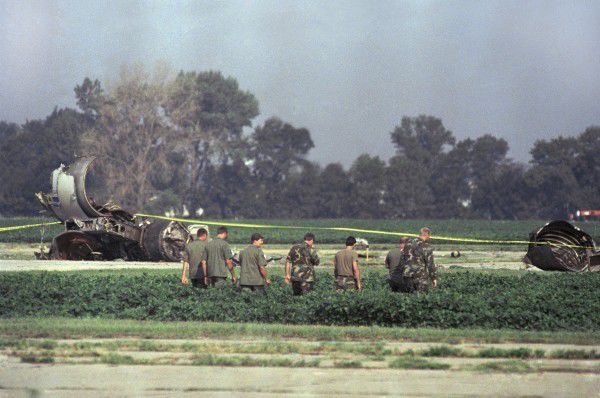 In this July 20, 1989, file photo, Iowa Air National Guard soldiers search a soybean field near the burned engine of Flight 232, which crash-landed at Sioux Gateway Airport. 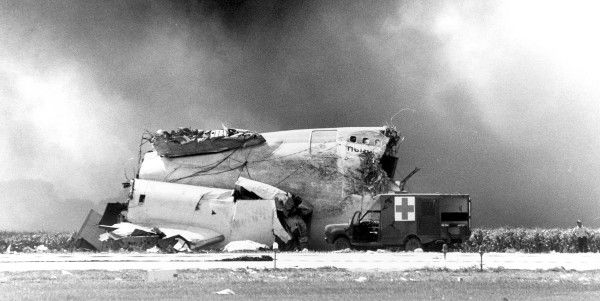 An ambulance is shown next to debris from Flight 232 at Sioux Gateway Airport in July 1989. 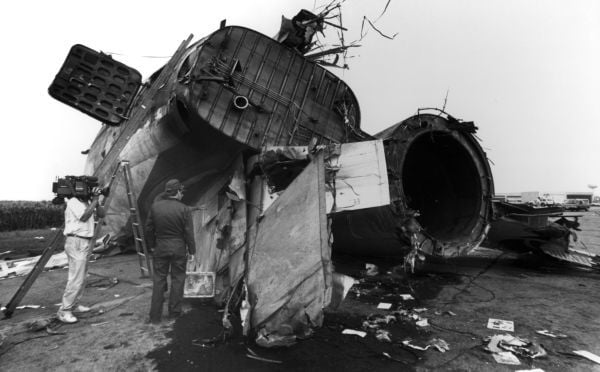 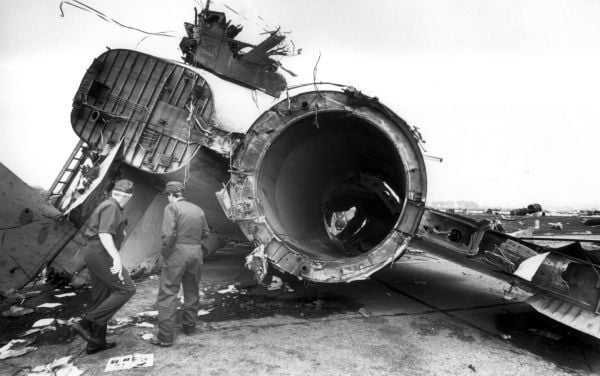 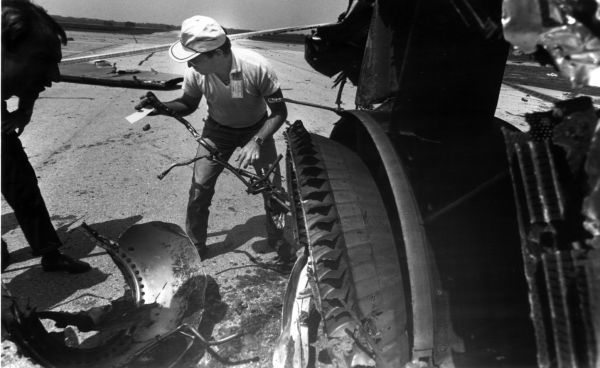 Investigators examine the engine of Flight 232 after it crash-landed at Sioux Gateway Airport on July 19, 1989. 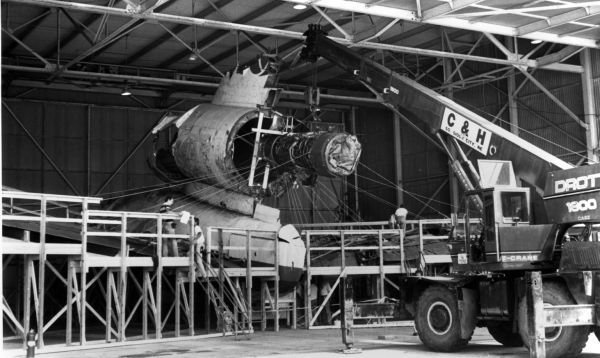 Crews inspect debris from Flight 232 after it crashed at Sioux Gateway Airport on July 19, 1989. 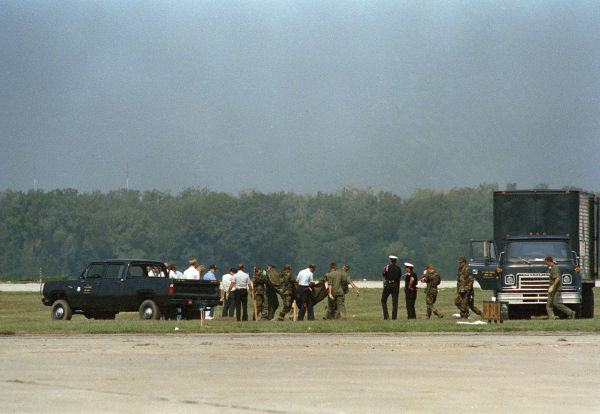 The remains of a passenger on Flight 232 are transferred to a van for transportation to a temporary morgue near the runway of Sioux Gateway Airport. The DC-10 crashed while trying to make an emergency landing after developing mechanical trouble in flight. (AP Photo/Jeff Carney) 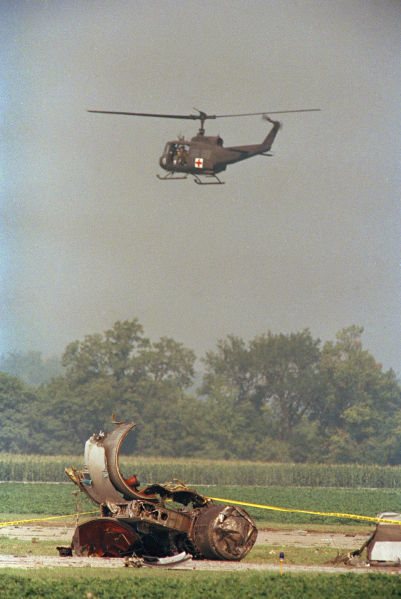 A National Guard helicopter circles over the site of crash of Flight 232 on July 21, 1989, searching for debris to be collected for the investigation into the cause of the tragedy. 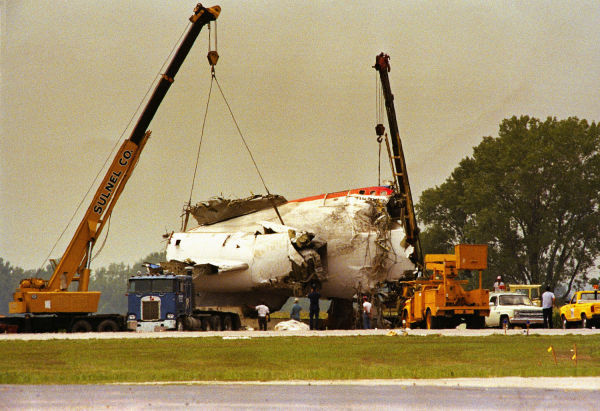 Cranes lift a tail section of Flight 232 at Sioux Gateway Airport in Sioux City on July 22, 1989. 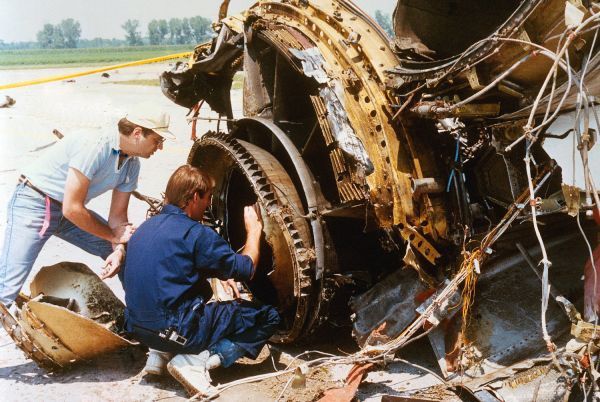 On the final impact, the aircraft's right wing broke off, causing the fuselage to cartwheel in a fiery ball before sliding to a stop upside down in a corn field at the end of a secondary runway.

Miraculously, 184 of the 296 people aboard survived, many due to the heroic actions of the crew, local emergency responders and medical staff.

[More Flight 232 coverage: Three decades on, Spencer Bailey -- the boy in the photograph -- discusses the crash's impact on his life.]

Haynes was celebrated nationally for keeping his cool in a crisis and overcoming a nearly impossible situation. But he never considered himself a hero, choosing instead to give all the credit to his co-pilots and crew, said Woodbury County emergency management director Gary Brown, who served in that capacity at the time of the crash and grew to consider Haynes a "great friend."

"He was the most humble man I've ever met in my life," Brown said late Sunday night.

In a 2010 interview with The Journal, Haynes noted "the captain gets all the credit, like a quarterback on a football team who won the big game. But, it's a team effort. That's what I stress."

Brown said Haynes never forgot the 112 people who died in the crash.

To honor their memory, he worked tirelessly over the next three decades to help prevent future air disasters. He traveled the world, speaking at various conferences that focused on lessons learned from Flight 232 and making corresponding changes in the industry.

"You can't get over any type of trauma or tragedy without talking about it. I have given over 1,500 talks and it has helped me accept what has happened," Haynes said in the 2010 interview. "Every time I gave a talk in the beginning, it was like therapy. ... I tell people to be proud of what you did. You can learn from it. Don't do it again."

During his travels, Haynes became Sioux City's "great ambassador," Brown said. The pilot made several visits back to Sioux City. One of the most recent was for a ceremony in 2014 marking the 25th anniversary of the crash.

Born in Paris, Texas, and raised in Dallas, Haynes entered the Naval Aviation Cadet Training program in 1952. After serving four years as a Marine aviator and flight instructor, he started working for United in 1956. Following a 35-year career as a flight engineer, first officer and captain, he retired in 1991, just two years after the 232 crash.

Later in life, Haynes' personal life was marked by heartbreak and tragedy. In 1997, his oldest son, Tony, died in a motorcycle accident. Two years later, Darline, his wife of 40 years, died from a rare infection that led to the rupture of her colon.

In 2003, Haynes' family and friends, including many in Siouxland, raised over $550,000 to cover the cost of a bone marrow transplant for his daughter, Laurie Haynes Arguello, who suffered from a rare disease.

For more than 33 years, Al Haynes volunteered as a Little League baseball umpire in his hometown of Seattle and also served as a public address announcer for local high school football games for more than 25 years.

Much of the movie, “Crash Landing: The Rescue of Flight 232,” was filmed in Sioux City. Haynes returned to the Iowa city for a premier of the film.—Dave Dreeszen

Visit siouxcityjournal.com to view a gallery of photos of Al Haynes over the years.

What stories did Journal readers like most this year? Look back with us.

For the better part of three decades, Spencer Bailey hasn’t spoken publicly about the United Flight 232 crash, nor the effects on his life from an event that happened when he was 3 years old.

SIOUX CITY | It's been more than 28 years since a United Airlines DC-10, flying from Denver to Chicago, crash-landed at Sioux Gateway Airport.

As United Airlines Flight 232 headed toward Chicago on July 19, 1989, a loud explosion ripped through the aircraft.

See how the Journal covered the crash and immediate aftermath of United Flight 232 in July 1989, 30 years ago this week.

Look back at Al Haynes' impact in Sioux City with historical photos. Haynes, a captain of United Flight 232, which crashed at Sioux Gateway Ai…

Chesley Sullenberger noted Haynes called him after the Hudson River landing and "graciously offered me the benefit of his experience, and I had the chance to meet him and his flight crew."

Six Sioux City law enforcement and emergency response personnel are taking part. "United was kind enough to fly us there," one said. Haynes died Aug. 25 in a Seattle hospital, a week shy of his 88th birthday.

He was defeated in his first attempt to win an Iowa 6th congressional district seat in 1972, but was elected in 1974. He beat out incumbent Wiley Mayne, whose loss is sometimes attributed to the post-Watergate backlash against Republicans. 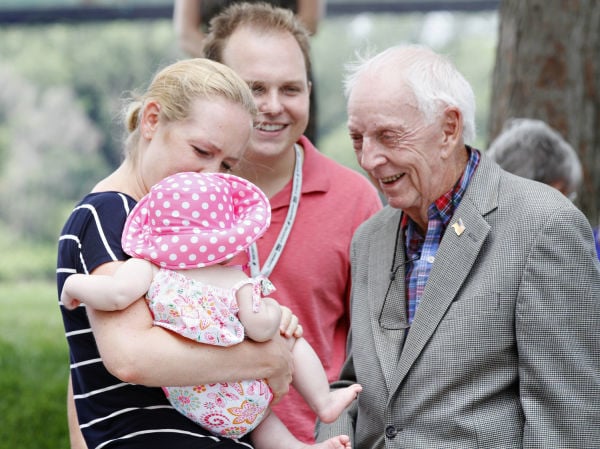 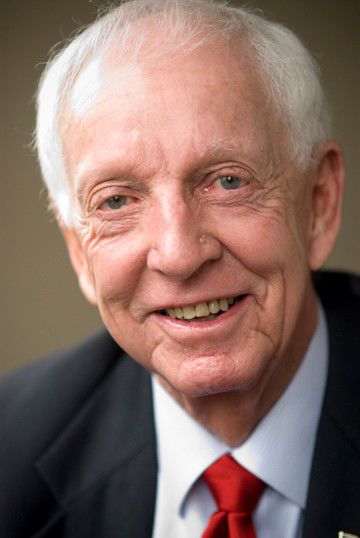