Watch now: Biden and Trump face off in their final debate

SIOUX CITY -- With a penchant for bowties and trademark neon green eyeglasses, Isaac Roerig was someone who was hard to forget.

But according to friend Madi Leuer, it was his kindness and willingness to help others that made Roerig so memorable.

"Nobody had a bad word to say about Isaac," she said. "He was one of the nicest people I've ever met.

A 2020 Bishop Heelan Catholic High School graduate, Roerig died Oct. 9 after being struck by a semi truck in Cedar Falls, Iowa. The 19-year-old was a freshman at the University of Northern Iowa at the time of his death.

WATCH NOW: Heelan graduates remember Keaton Chicoine: 'You couldn't help but laugh at what he said'

Both Leuer and Beumler met Roerig when all three were freshmen at Heelan. The three members of Heelan's 2020 graduating class remained friends as UNI education students.

Anna Plathe, a 2019 Heelan graduate and a sophomore UNI communications student, was also friends with Roerig.

"Isaac loved music," Plathe said. "He was passionate about it."

Indeed, Roerig was involved with music throughout his four years at Heelan. He was chosen an all-state vocal music singer, performed in the Chorale music group and Harmonia Mundi Show Choir, was a drummer in the jazz band and a percussionist in the Heelan's marching band.

"Isaac could teach himself to play any percussion instrument he set his mind to play," Leuer said.

"He could play a trap set in the marching band," Beumler interjected. "But he could also play the triangle or cymbals, which isn't as easy as you think."

Beumler said that is because Roerig had extraordinary concentration.

"You could always tell Isaac was in concentration mode because he'd get a serious look on his face and his tongue would stick out of his mouth," she said while giving a good impression of Roerig's concentration face.

"When he became the drum major in his senior year, Isaac personally wrote cards to each member of the marching band," she recalled. "That was how considerate he was."

This was pretty typical for Roerig, Beumler said.

"Isaac was always thinking of others," she explained. "He'd do anything for anybody."

Roerig was the son of Todd and Susan Roerig, and brother to Noah, currently a South Dakota State University student, and Grace, a Mater Dei School seventh grader.

An outdoor memorial service for Roerig will be held at 1 p.m. Sunday at Heelan's Memorial Stadium, 100 W. 17th St. The Rev. Shane Deman, Heelan's Chaplain, will lead the service and several of Roerig's former teachers and classmates are expected to speak. The public is invited to attend. Everyone must wear face masks and bring their own chairs.

Hundreds of t-shirts, bearing images of bowties and neon green glasses, have been ordered to raise funds for a scholarship in Roerig's name.

Roerig is the second member of Heelan's 2020 graduating class to have died in traffic accidents. Keaton Chicoine, 19, was killed in a hit-and-run accident in Tampa, Fla., on June 25.

"It was in times like these when Isaac really shined," Beumler said. "He'd be the first person to start fundraising for a cause or reach out to a family during a terrible time."

"That was just the type of person Isaac was," Leuer added. "He was larger-than-life and had a big heart."

"Plus he loved his Mountain Dew," Plathe noted with a smile.

"And nobody loved neon green like Isaac," Beumler said.

"Isaac was a goofy dude," Leuer said. "He was also a sweet guy who loved his family, his friends and his faith. That's how I'll remember him."

WHAT: Memorial Service for 2020 Bishop Heelan Catholic School graduate Isaac Roerig. Neon green glasses, a favorite of Roerig, will be distributed for a freewill donation towards a scholarship

SPECIAL REQUIREMENTS: The public is welcome to attend. Must bring chairs and facial coverings will be required.

Poetry Out Loud students discover the essence of words

SIOUX CITY -- A recited poem is meant to convey emotions, both good and bad, as well as interpret the message of the poet.

Two members of Heelan's 2020 graduating class have been killed in pedestrian-vehicle crashes in less than four months. 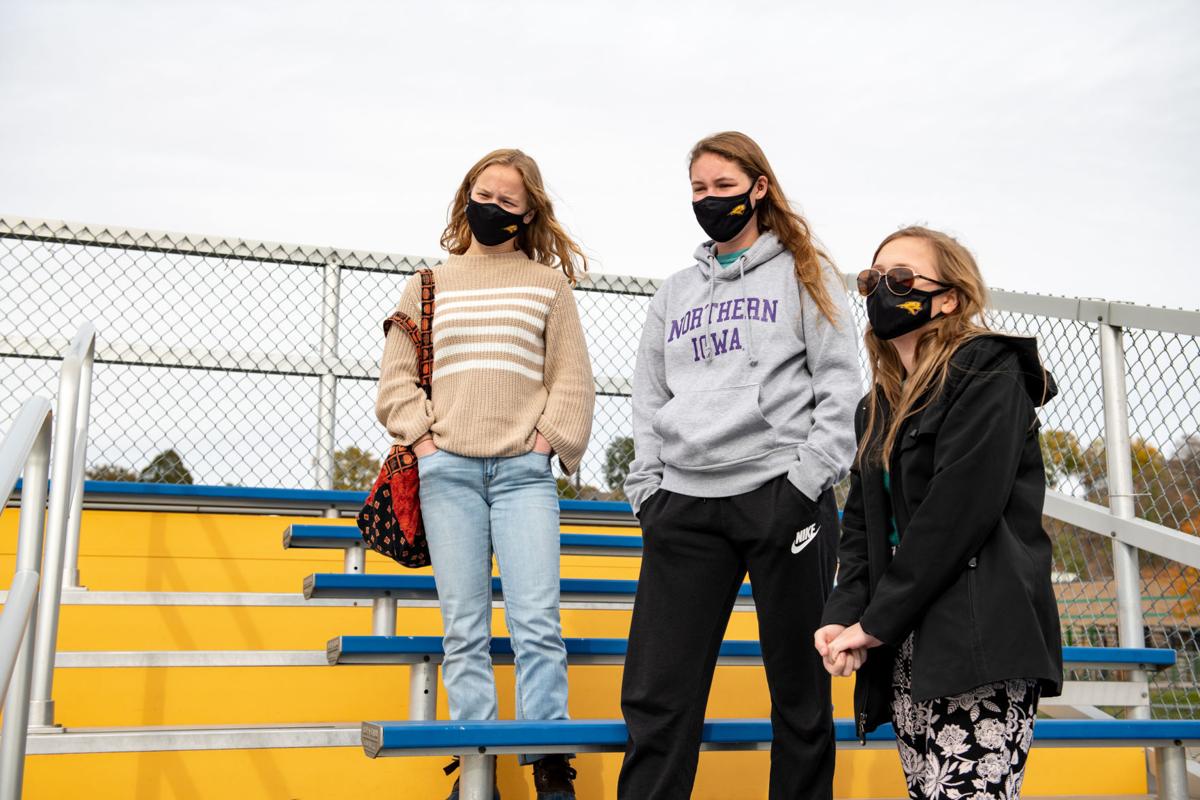 Sarah Beumler, left, Madi Leuer, and Anna Plathe sit in the band section of the bleachers Friday at Bishop Heelan Memorial Field remembering their friend Isaac Roerig. The UNI student, a drum major and 2020 graduate of Bishop Heelan High School, was killed in a traffic accident on Oct. 9, 2020 in Cedar Falls, Iowa. 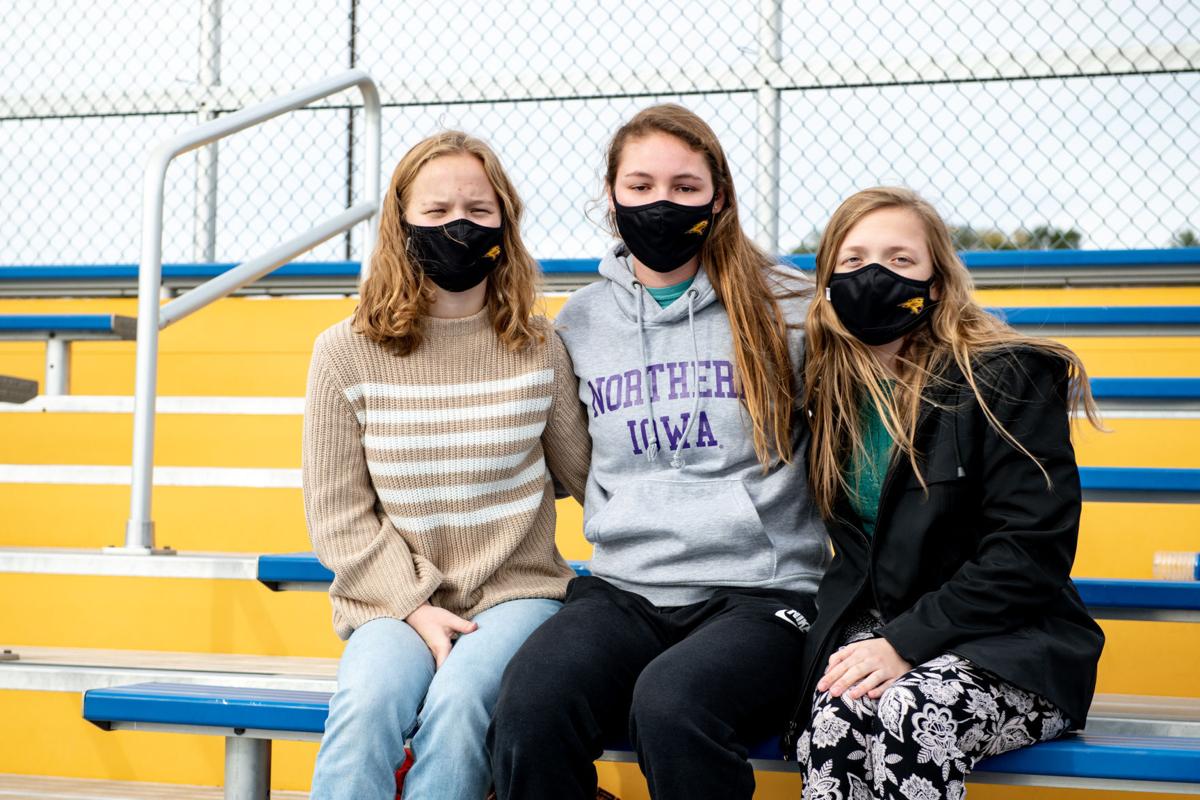 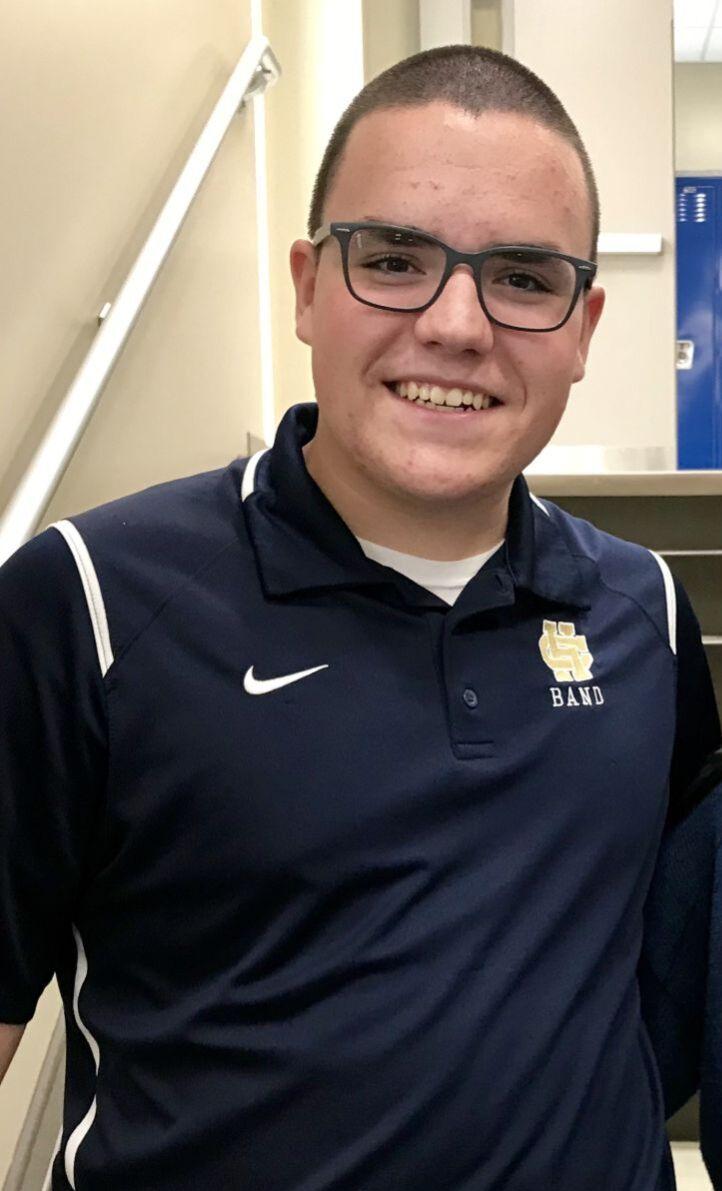