MAURICE, Iowa -- Dennis Muilenburg, CEO of The Boeing Company, flew over the farm where he was raised while preparing to land at the new Sioux County Regional Airport on Wednesday.

The farm stands 1.5 miles north of the new $32-million airport, a modern marvel of hangars, runway space and conference rooms, a mile or so from tiny Maurice, or about halfway between Sioux Center and Orange City, the "twin cities" of always-bustling Sioux County.

Muilenburg had another label for the site near the intersection of Highways 10 and 75, a moniker harkening back to his formative years near this 493-acre tract. "When I was growing up on a farm nearby here this was known as the 'Million Dollar Corner,'" he said as folks nodded. "Remember that? Well, it's now more than a million dollars!"

Muilenburg, a 1982 graduate of Sioux Center High School, served as keynote speaker for a grand opening gala that attracted Gov. Kim Reynolds, a host of local leaders, and 750 enthusiastic spectators.

Harold Schiebout, Sioux Center's former city manager and now the tireless chairman for the board of directors serving the Sioux County Airport, presided over the festivities and noted how this project's genesis could be traced to local, regional and state gatherings in 1999. Partnerships among government entities resulted in this day coming to fruition, as federal funding accounted for close to $23 million, while Orange City, Sioux Center and Sioux County chipped in another $7 million. The Iowa Department of Transportation allotted $1.2 million, and some $700,000 to $800,000 came via private sources.

"You think about Sioux Center, Orange City, Sioux County, the FAA, the State of Iowa, all working together to make this happen," said Muilenburg. "This is the place where we learn about partnerships and community, hard work and integrity. No matter where you are in the world, that applies."

Muilenburg also shared that Boeing is now building a rocket that will take humans to Mars in a space-launch system operated with NASA. "That rocket will take us back to the moon," he said. "We'll set a permanent base on the moon. We'll set up a gateway orbit around the moon and that will be the launch point to go to Mars."

To make those things happen, Muilenburg said, Boeing has to have great talent, the type of talent that shows in 35 of its supply companies found in Iowa. "There's much advanced aerospace work being done in Sioux County," he said while mentioning a pair of firms. "I'm convinced that this airport will only add to that economic energy."

Reynolds, who carried 86 percent of the vote in Sioux County last week, said this airport is but one example for what lies ahead for Iowa. "You can let fear of the unknown keep you where you are; or you can move on in confidence knowing you want to progress even if there is risk," she said. "You recognized a need and you came together and were committed to addressing it for the betterment of the region. You’ve accomplished a great project that will be an imp asset for the state."

Mark Vogel, of Diamond Vogel in Orange City, likened the new airport to high-speed internet, a new tool for the toolbox used by individuals and businesses. Vogel recalled how his family's business began to view their place in the market much more regionally in 1970 when the City of Orange City commissioned its airport, a site to be replaced by the new Sioux County Regional Airport.

For it was in 1970 when Diamond Vogel bought a small single-engine Beachcraft Bonanza and began using it to call on and serve customers. At that time, Mark Vogel said, there were 3,200 paint companies in the U.S., the bulk of which operated in large cities. Diamond Vogel, in turn, was a small company in a small city.

"With the help of business aviation, Diamond Vogel has been able to survive and thrive in an industry today that has less than 200 paint manufacturing companies in the U.S.," he said. Diamond Vogel ranks in the top 20 among paint producers in the U.S.

"This is a great investment in the future," Muilenburg concluded. "This is a big enabler."

He concluded his remarks and joined the governor and other leaders for a ribbon cutting. Then, after visiting with friends, former teachers and teammates, Muilenburg extended his farewells to his mother, Alyda Muilenburg, his sister, Janna Nomansen, and his brother, Harlan Muilenburg, and their families. He then walked from the new terminal and waved goodbye as he stepped aboard the Challenger 650 that would take him back over his boyhood farm and, soon enough, back to his duties as Boeing president, chairman and CEO.

As the jet banked and zoomed north over the old farm, Dennis Muilenburg's mother looked up and said, "I am so proud."

The Boeing Company CEO Dennis Muilenburg talks about his company and his Sioux County roots at siouxcityjournal.com

MAURICE, Iowa -- The grand opening of the region's newest airport has been scheduled for Nov. 14.

MAURICE, Iowa -- From the runway of the new Sioux County Regional Airport, one can see the water towers in both Sioux Center and Orange City. …

MAURICE, Iowa | Fall rains may have slowed progress on a new Sioux County airport, but it hasn't dampened the dreams of developers who believe…

MAURICE, Iowa -- Three Sioux County government entities have been honored by the Iowa League of Cities for their collaboration in developing a… 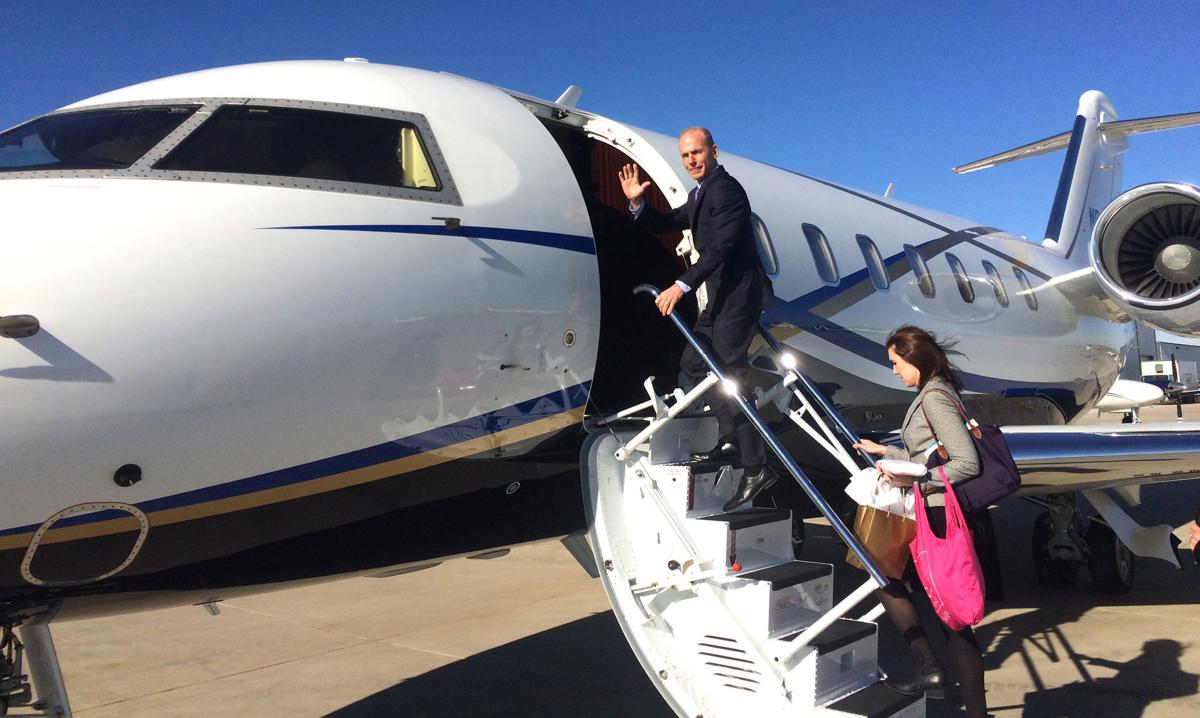 Dennis Muilenburg, chairman, president and CEO of The Boeing Company, waves as he steps onto the Challenger 650 jet that brought him to the grand opening celebration for the $32-million Sioux County Regional Airport near Maurice, Iowa, on Wednesday. 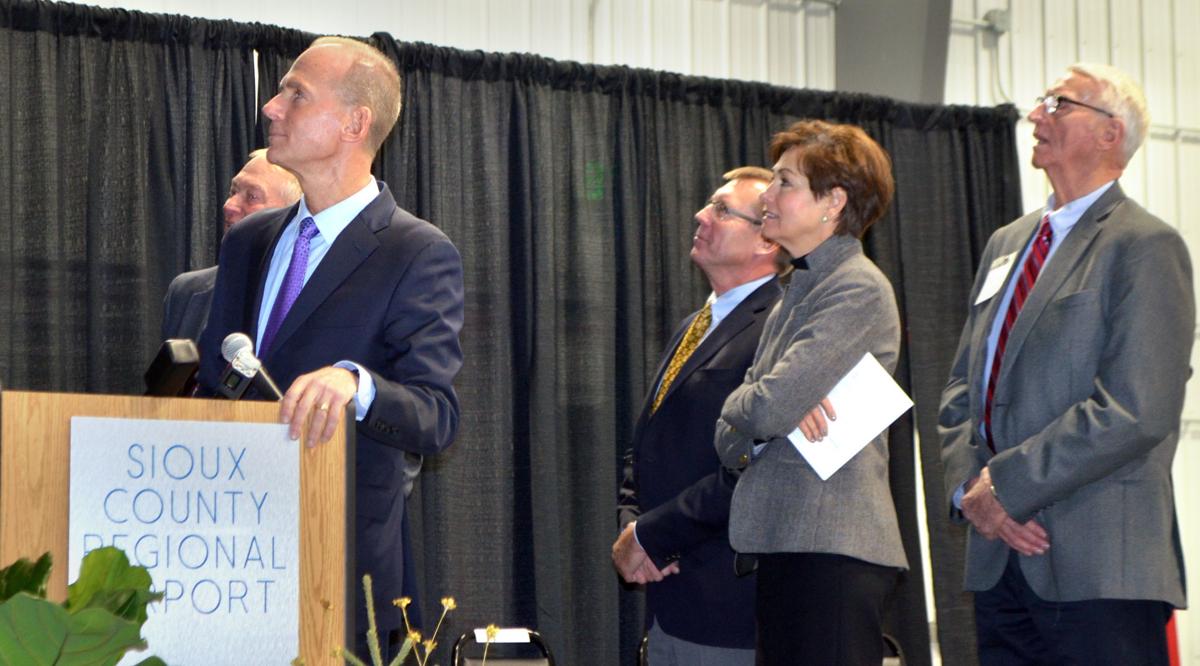 Dennis Muilenburg, at the podium, watches a video about The Boeing Company during a grand opening for the Sioux County Regional Airport on Wednesday near Maurice, Iowa. Muilenburg, a Sioux Center High School graduate, serves as president, chairman and CEO of The Boeing Company. Behind Muilenburg are Iowa Governor Kim Reynolds and Harold Schiebout, chairman of the board of directors serving the Sioux County Regional Airport. 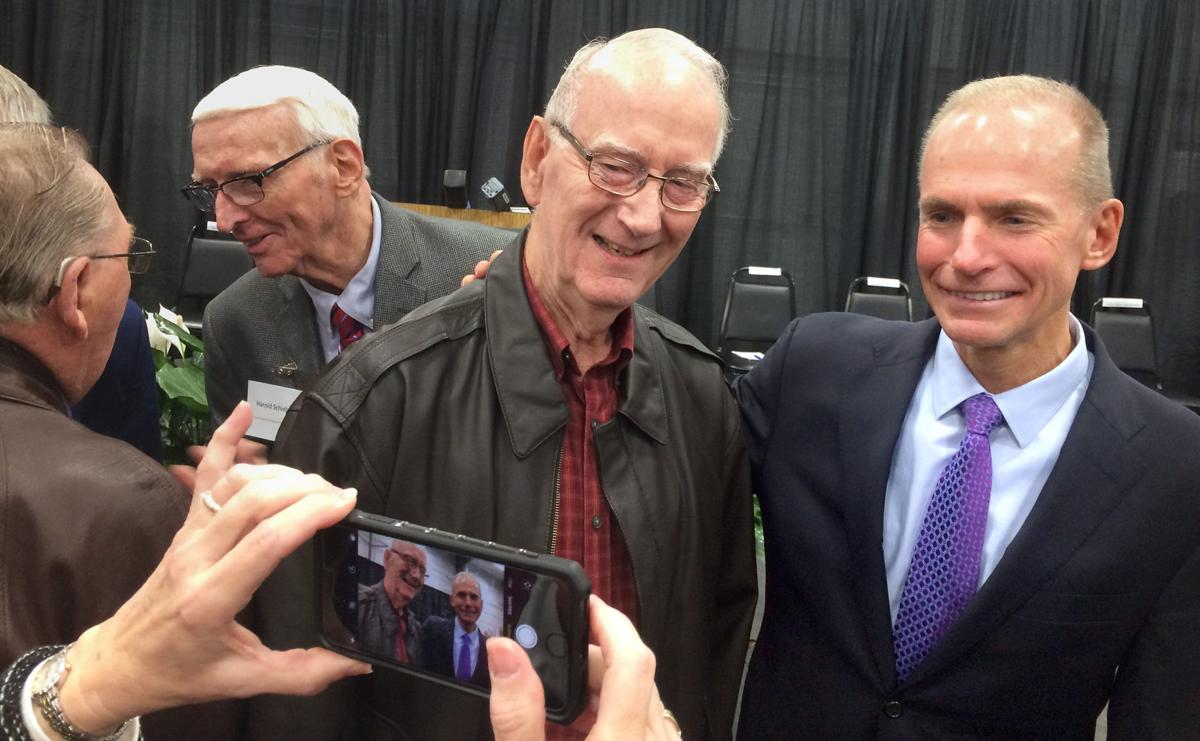 Noreen De Hoogh, who can't be seen, takes a photo of her husband, Ted De Hoogh, left, as he stands with Dennis Muilenburg, president, chairman and CEO of The Boeing Company, on Wednesday during a grand opening celebration for the $32-million Sioux County Regional Airport. De Hoogh taught Muilenburg at Sioux Center High School in the early 1980s. Behind them is Harold Schiebout, chairman for the board of directors serving the Sioux County Regional Airport. 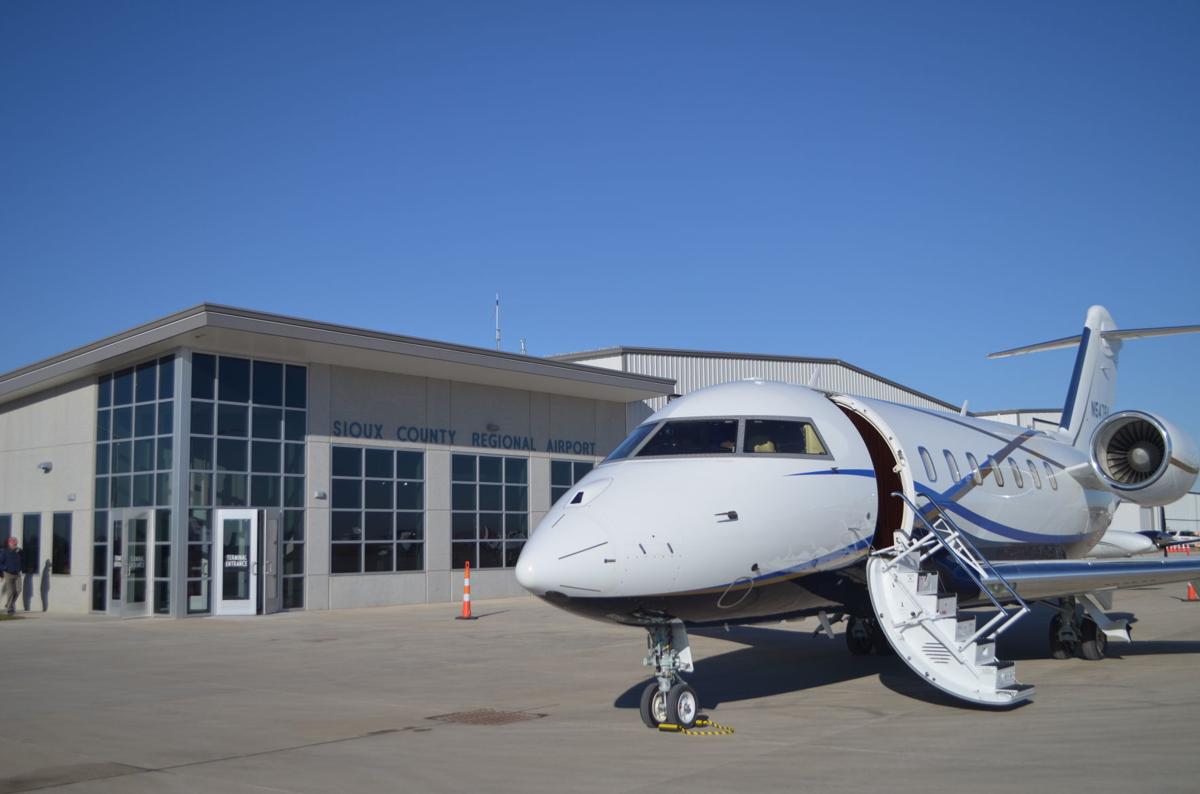 A Challenger 650 jet from Bombardier brought The Boeing Company CEO Dennis Muilenburg to the Sioux County Regional Airport grand opening on Wednesday near Maurice, Iowa. The jet, which left Midway Airport near Chicago, Illinois, flies around 350 miles per hour and seats 10. 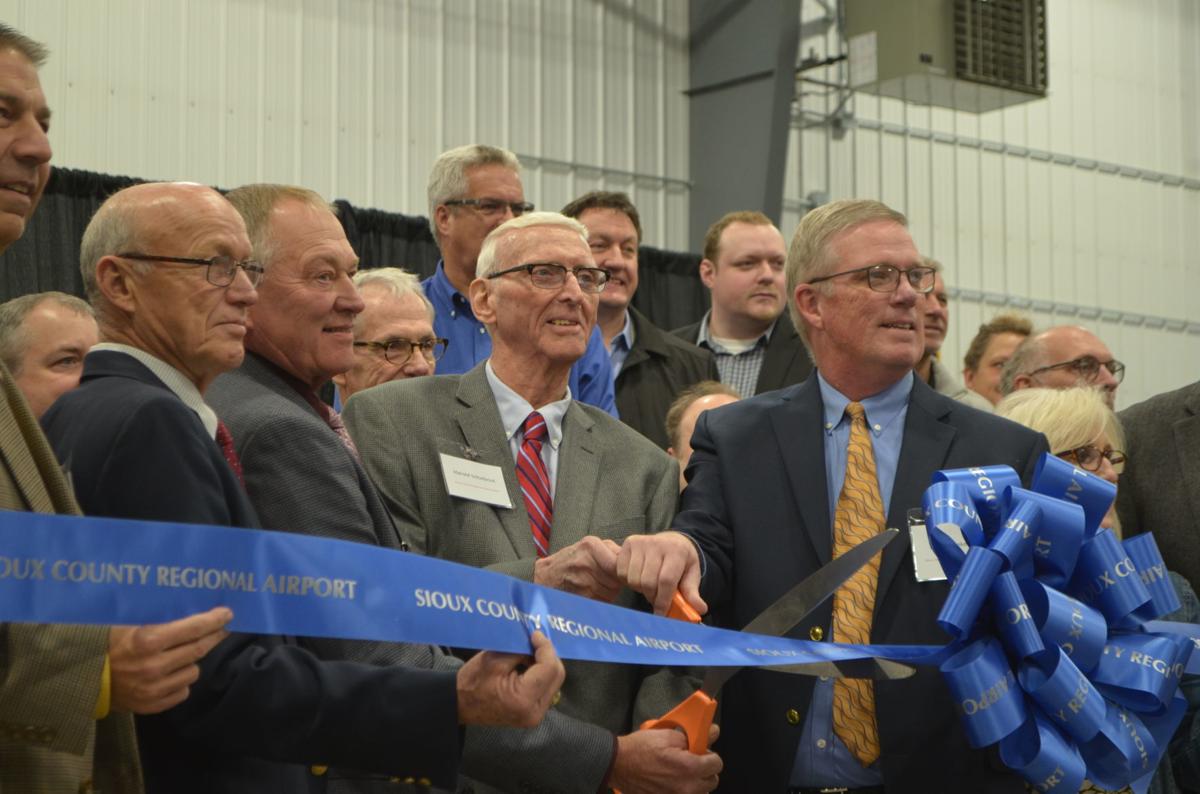 Harold Schiebout, center, is flanked by Mark Sybersma, immediate left, and Duane Feekes, immediate right, as they cut the ribbon to signal the opening of the $32-million Sioux County Regional Airport near Maurice, Iowa, on Nov. 14. The Iowa League of Cities has honored the cities of Orange City and Sioux Center and Sioux County for their collaboration on building the airport.