Become a Member
Read Today's E-edition
Share This
Galva, Iowa, getting visitors for 2 years due to Highway 20 detour
0 Comments
Share this
1 of 2 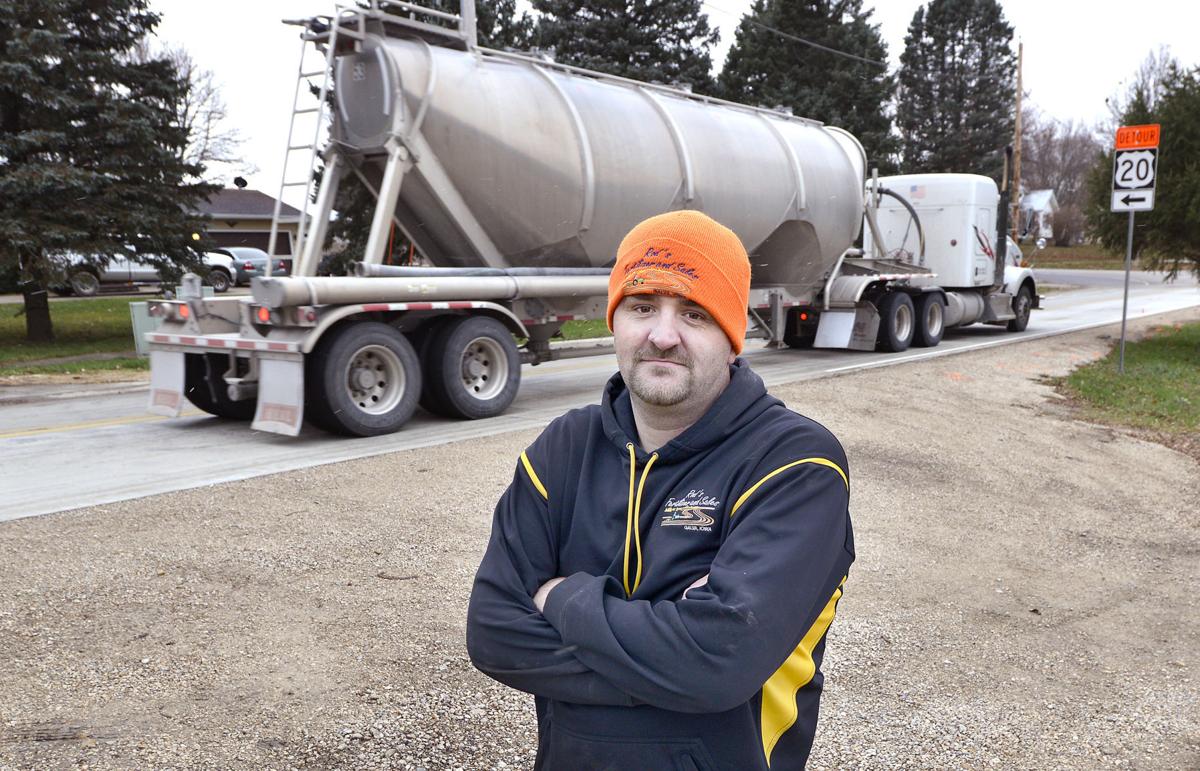 Lucas Schossow, stands in front of his Galva, Iowa, home Wednesday. A project to widen US Highway 20 to four-lanes has resulted in the closure of the highway from Galva to US. Highway 71 north of Early and the rerouting of traffic onto the usually quiet county road in front of his home. 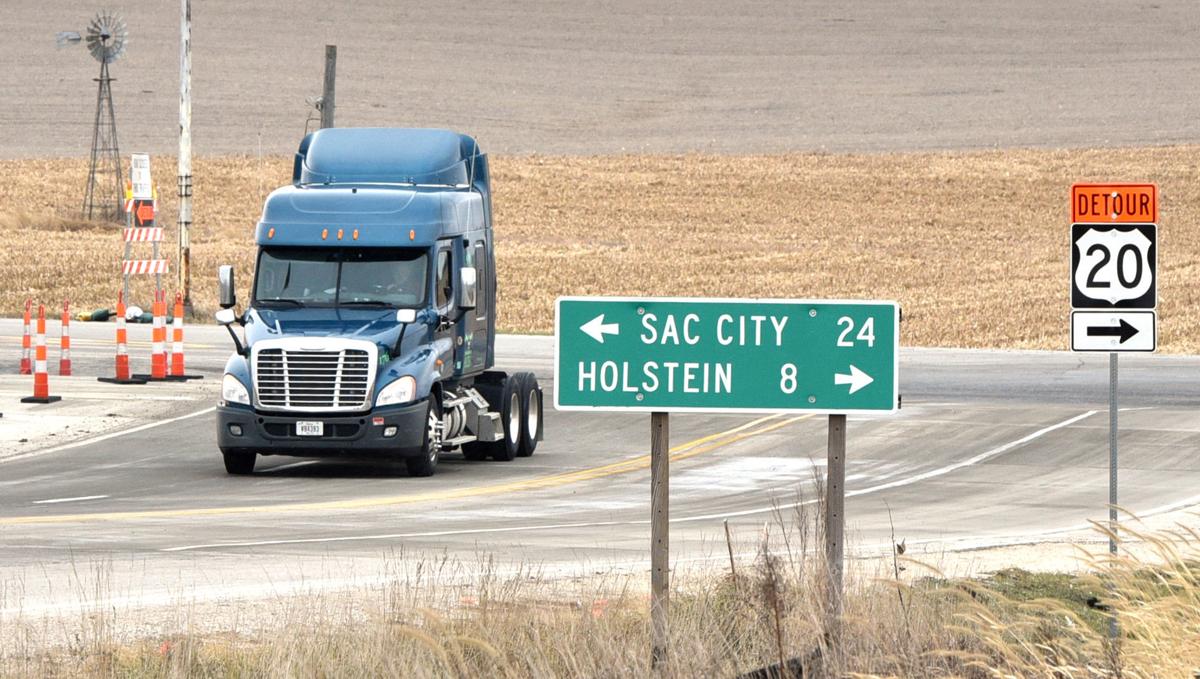 A truck turns onto the westbound U.S. Highway 20 detour on the southern edge of Galva, Iowa, on Nov. 30, 2016. The detour, from Galva to U.S. Highway 71 near Early, will go back into effect April 11 while work continues to expand U.S. 20 to four lanes.

The heightened traffic is due to the closure of Highway 20 between Galva and Early, as the Iowa Department of Transportation proceeds on the $286 million project to widen the remaining 40 miles of the highway to four lanes between Moville and Early by late 2018.

A highway detour route opened in October and will run for two years. It goes by homes on Galva's south edge, with residents mixed on whether the traffic is bothersome.

Lucas Schossow moved in May 2015 to a Galva house that's now on the detour route. Traffic on County Road D15 flows past the north side of his home, which is the second house to the east of an intersection with four-way stop signs.

Schossow said cars on the detour route seem to be in a hurry. He said motorists routinely speed past his home, where the posted speed limit is 25 mph.

Schossow is more upset with semi-trucks, which he said don't adhere to the city abolition on usage of loud, so-called jake brakes.

"They wake my 11-month daughter up and I've got to deal with that for two hours," Schossow said.

Mary and Gordon Sorenson have lived in a home on the northwest corner of the detour turning spot in Galva since 1962. Mary Sorenson said they've been through a detour a few decades ago, when work near the Maple River also brought cars into Galva.

Sorensen takes the stance that the detour inconvenience will be offset in the long run by the benefits of four-lane Highway 20, which supporters say will improve safety and boost economic development.

"Once it gets opened up, the road to Sioux City will really open to commerce. The future benefits of the road will be well worth the work," Sorenson said.

Moreover, Sorensen takes a more wondering approach to all the traffic, arriving from a wide variety of places, traveling through the small town for a few moments.

"Everybody is going some place and they have their stories, I'm sure. We have kind of enjoyed it," Sorensen said.

Until late 2018, an estimated 2,500 vehicles per day will be detoured on county blacktops between Galva and U.S. Highway 71 north of Early.

Galva, pop. 434, and Schaller, pop. 772, are the two towns on the detour. The detour goes through a residential neighborhood in Galva, but only skirts the northwest edge of Schaller, with the route going by a cemetery on county roads that have been modernized to handle the heavier traffic.

Dakin Schultz, IDOT District 3 traffic planner, said a two-year detour is rare but necessary in this case to keep construction on the 11-mile stretch of Highway. 20 on schedule. By closing the highway for two years, contractors can work on all four lanes at once.

The detour takes motorists about six miles out of their way. For eastbound motorists, it follows Ida County Road M25 north to Galva, then east on Ida/Sac county road D15 to U.S. Highway 71, which is about three miles north of U.S. 20 and the town of Early. At Early, eastbound traffic links up with a four-lane Highway 20 that runs to the state's eastern border.

Sorensen liked how County Road D15 was widened and resurfaced by IDOT to handle the detour traffic.

Anita Brandt has lived in Galva for 26 years and served as clerk for the city government for 24 years. Brandt said not a lot of traffic beyond trucks going to the ethanol plan south of town typically go through Galva. She said being on the detour route for two years will mean a lot of people who have never been to Galva will now drive through, which she called an opportunity.

Brandt said she knows many of the detour travelers are determinedly bound for a destination, but hopes some peel off the road for a stop. The downtown lies just north of the detour, where the options include the Sizzlin’ J restaurant and a bar called The Lumber Inn.

"We'd love to see them come in and partake of the restaurant or the bar or get fuel...Our restaurant has really good food and service," Brandt said.

"People don't stop at the stop sign. They just roll through. They are going 35-40 (mph) past my house already, and I am only the second house," Schossow said.

Schossow added, "We aren't looking forward to the next two years at all...Mostly it is the truck traffic that bugs us."

Sorensen said her chief concern involves travelers in the winter. She said long trucks have jack-knifed at the intersection on slick spots in the past, running into yards. She said problems could be reduced if crews keep the intersection free of snow and ice.

U.S. 20 detour to affect Galva to Early traffic for 2 years

HOLSTEIN, Iowa | Every day at 6 a.m. during the school year, a bus shuttling athletes leaves Early, Iowa, with stops at Schaller and Galva bef…

SIOUX CITY | It might be hard to convince motorists who on Monday began navigating a new detour around construction on U.S. Highway 20, but a …

Highway 20 detour through Galva will get winter break

SIOUX CITY | Plans for the U.S. Highway 20 modernization project in Ida and Sac counties have changed, and motorists will get a winter repriev…

GALVA, Iowa | Beginning March 20, road construction work on the Highway 20 expansion in Ida and Sac counties will close traffic on an approxim…

JACKSON, Neb. | The Nebraska Department of Roads will conduct an information open house to discuss proposed improvements to U.S. Highway 20 in…

GALVA, Iowa | For 32 years, Brad Yearous has mowed the large yard surrounding his home on the corner of Ida County roads M-25 and D-15.

Watch now: An inside look at the USS Arizona Relics Program and its history

Watch now: An inside look at the USS Arizona Relics Program and its history

Lucas Schossow, stands in front of his Galva, Iowa, home Wednesday. A project to widen US Highway 20 to four-lanes has resulted in the closure of the highway from Galva to US. Highway 71 north of Early and the rerouting of traffic onto the usually quiet county road in front of his home.

A truck turns onto the westbound U.S. Highway 20 detour on the southern edge of Galva, Iowa, on Nov. 30, 2016. The detour, from Galva to U.S. Highway 71 near Early, will go back into effect April 11 while work continues to expand U.S. 20 to four lanes.