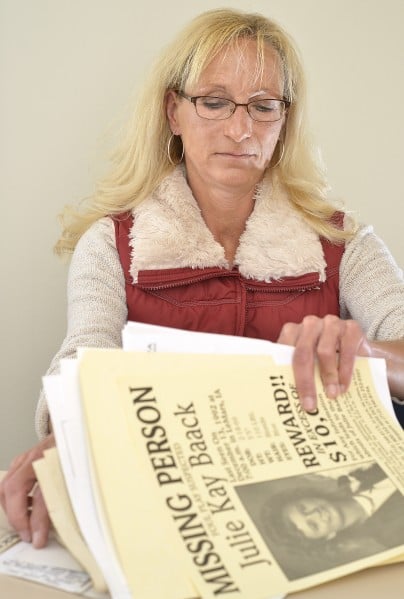 Beth Williams shows documents related to the 1992 murder of her sister, Julie Baack, of Le Mars, Iowa. Baack's killer was sentenced to 50 years in prison in 1995, but was paroled after serving 17 years. 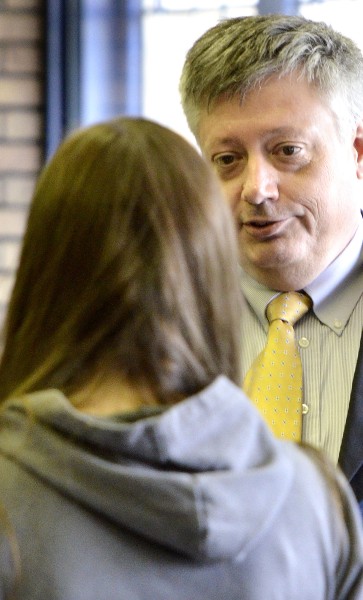 Assistant Woodbury County Attorney Mark Campbell is shown at a sentencing hearing in April 2012. He says there are common misconceptions about prison sentences. "I think most people are surprised that 10 years doesn't mean they'll serve 10 years," he says. 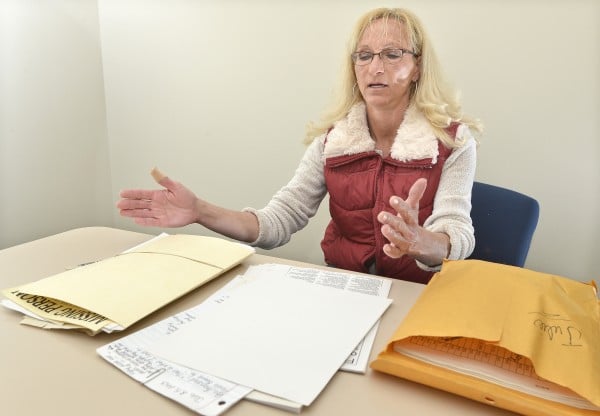 Beth Williams talks about the 1992 murder of her sister, Julie Kay Baack in Le Mars, Iowa. Baack's killer, Brian Davis, was sentenced to 50 years, but was paroled earlier this year after serving 17 years. Williams said she would like to see Iowa's sentencing laws strengthened to ensure inmates would serve more of the time on their prison sentences. Sioux City Journal photo by Tim Hynds

After all that time, she still wonders why Iowa's criminal statutes call for prison sentences of various lengths, only to have many offenders released after serving far less than half of their sentence.

"I don't understand this cutting sentences down. If you say 50 (years), do 50. Don't give the family of the victim hope," said Williams, who in 1995 watched Brian Davis get sentenced to 50 years for the 1992 murder of Williams' sister, Julie Baack, of Le Mars, Iowa.

Davis was paroled earlier this year after serving 17 years in prison, less than the 22-plus years he would have been required to serve under Iowa's earned-time statute.

Davis' case is not unique. Iowa prison inmates often serve a fraction of their prison sentence. The earned-time statute cuts 1.2 days off an inmate's sentence for every day served. An offender sentenced to serve 10 years, for example, has his or her sentence cut to four years, 199 days under the earned-time provision. An offender's prison sentence is cut by more than half the day he or she arrives in prison.

Iowa Department of Corrections spokesman Fred Scaletta said earned time was implemented in 1999-2000 to replace more complicated incentive systems that enabled inmates to reduce their prison sentences. The earned-time system provides a quick calculation that allows inmates and prison officials to know how much time the inmate is facing. Inmates who violate prison rules can have that earned time taken away and be forced to serve more of their sentence.

"It's always been an incentive program," Scaletta said.

Many inmates are taking advantage of the incentives.

Iowa Department of Corrections statistics show that in fiscal years 2011-12, 29 inmates sentenced in Woodbury County to five years in prison for third-degree burglary spent an average of 17.9 months in prison. The 15 Woodbury County offenders who had been sentenced to 10 years for first-degree theft and were released in 2011-12 spent an average of 22 months in prison. Those convicted of sexual abuse typically served a higher percentage of their sentence, but those crimes have sentencing provisions different from most others.

Those statistics are familiar to prosecutors, who must explain to victims why an offender likely will not do anywhere near the time to which they are sentenced.

Those explanations can lead to victims choosing not to prosecute. Deb Hogan, outreach program director at Sioux City's Council on Sexual Assault and Domestic Violence, said her agency has worked with victims who didn't pursue prosecution because it wasn't worth it to them to go through the process knowing the offender wouldn't serve much time.

"A lot of times they were thinking they were going to have an extended period of safety, then they find out that's not going to happen," Hogan said. "If you could say from the beginning this person, if convicted, they're definitely going to serve this amount of time, I think that would lead to more victims going ahead with prosecution."

In addition to receiving the automatic earned-time reduction, inmates receive credit toward their sentence for any time spent in jail prior to sentencing. Inmates also often leave prison much earlier because they're released on parole.

Those on parole are considered to be serving their prison sentence, but they're living outside prison walls. Parolees must follow certain restrictions and meet with parole officers. If they violate terms of their release, they can be returned to prison for the remainder of their sentence.

Jason Carlstrom, chairman of the Iowa Board of Parole, said the parole board does not release inmates just to reduce inmate housing costs.

"Our job is not to reduce the prison population," Carlstrom said. "Our determination is based on whether we believe the inmate is ready to re-enter society and not be a danger to society and to themselves."

Carlstrom said with the addition of mandatory minimum sentences for some crimes, some inmates are serving longer prison sentences. He also said the number of paroles granted has decreased. A state report showed the number of inmates granted parole in 2011 was 2,909, down from 4,087 in 2006. As recently as 2009, more than 3,000 paroles were granted.

Carlstrom said the parole board's goal remains to ensure public safety. Inmates can earn their releases by completing educational, treatment and/or vocational programs. Carlstrom said the supervision parolees must adhere to once outside of prison helps minimize their threat to society.

"Generally, people don't understand exactly what it's about," Carlstrom said. "They think early release onto parole is some kind of reward. It's not. It's an opportunity to do even a little bit more than incarcerating them. It's a tool in creating compliance with the rules of society."

Scaletta said no two inmates' sentences are the same. If two people sentenced to the same number of years for the same crime enter prison on the same day, that doesn't mean they'll both get out at the same time. An inmate eligible for parole at the time they report to prison also is likely to serve more prison time.

"If someone does not have a mandatory minimum (sentence), and the day you walk into prison you're eligible for release, it's probably not going to happen," Scaletta said.

He said the corrections department understands public feelings that inmates are being released from prison before serving enough of their sentence.

"We do a lot of explaining to victims when they come here. It's sad, but we have to tell them the truth," Scaletta said. "We live with what we have."

Iowans shouldn't have to live with those rules, Williams said.

She'd like to see sentences, especially those for serious crimes such as murder, set in stone. No earned time off. No early releases. Sentences should give victims' families some comfort by knowing that the offender will be in prison for the number of years dictated by state laws, she said.

In the case of her sister's murder, Williams said hearing a judge sentence Davis to 50 years didn't mean much when knowing he'd be out much sooner.

"Why even put it in the paperwork that it's 50 years? What's the sense? Why give the family hope by throwing it out there that they get 50 years?" Williams asked. "There's got to be a mandatory without ifs, ands or buts."

A mother convicted in the death of her 2-year-old daughter is free after serving nearly 13 years of a 50-year prison sentence.

Probation for Moville, Iowa, woman who locked child in bedroom for hours

A Moville, Iowa, woman has been placed on probation for locking a child in a room for hours.

Anxiety caused by her son's death could have exacerbated Ashley Cameron's mental health condition that makes it hard for her to communicate with others, her psychiatrist testified Wednesday during Cameron's murder trial.

Beth Williams shows documents related to the 1992 murder of her sister, Julie Baack, of Le Mars, Iowa. Baack's killer was sentenced to 50 years in prison in 1995, but was paroled after serving 17 years.

Assistant Woodbury County Attorney Mark Campbell is shown at a sentencing hearing in April 2012. He says there are common misconceptions about prison sentences. "I think most people are surprised that 10 years doesn't mean they'll serve 10 years," he says.

Beth Williams talks about the 1992 murder of her sister, Julie Kay Baack in Le Mars, Iowa. Baack's killer, Brian Davis, was sentenced to 50 years, but was paroled earlier this year after serving 17 years. Williams said she would like to see Iowa's sentencing laws strengthened to ensure inmates would serve more of the time on their prison sentences. Sioux City Journal photo by Tim Hynds 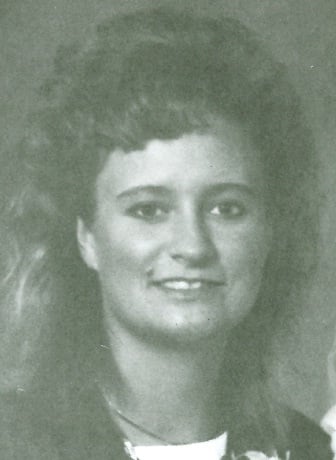 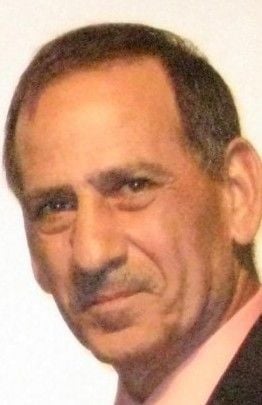