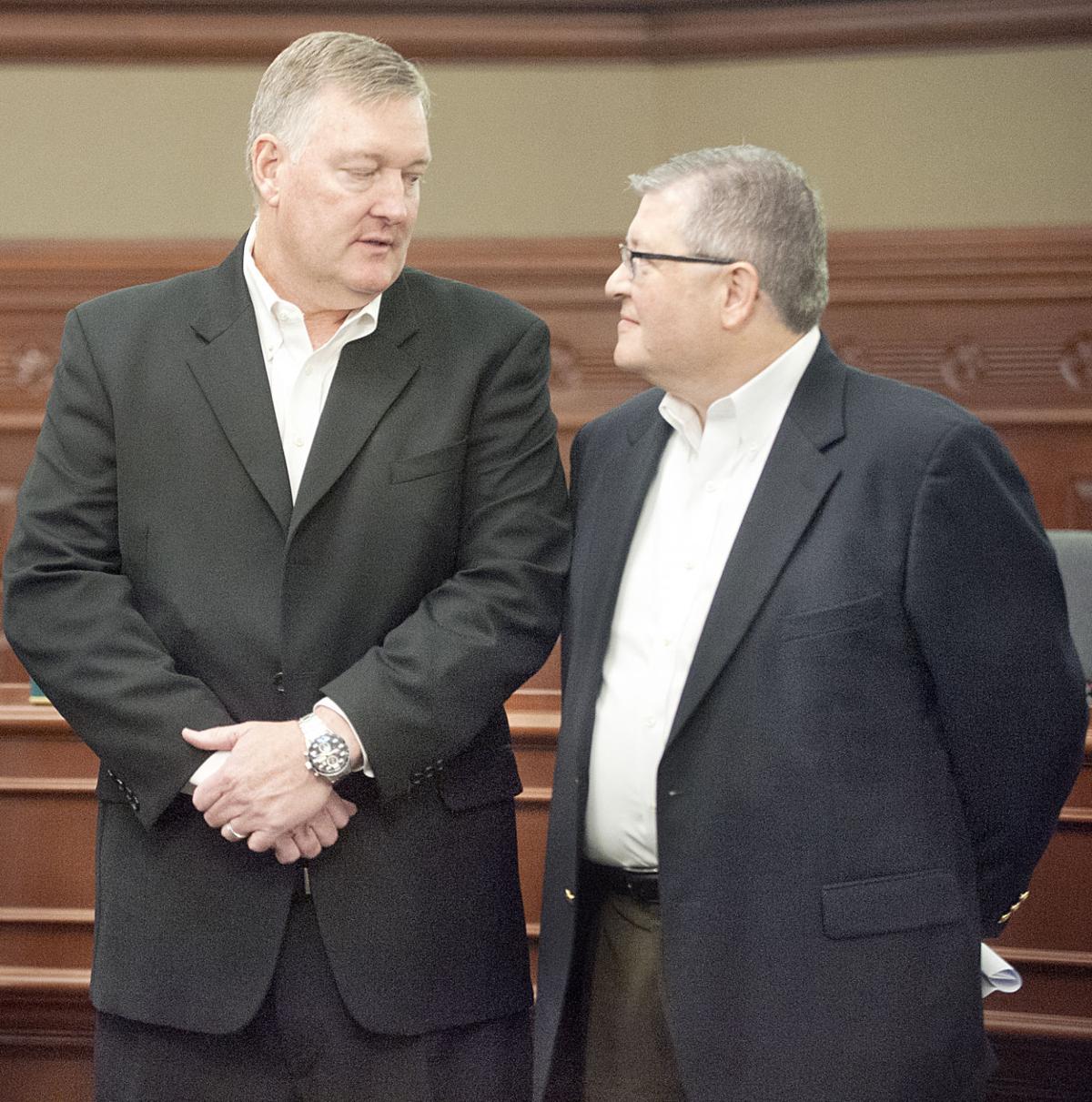 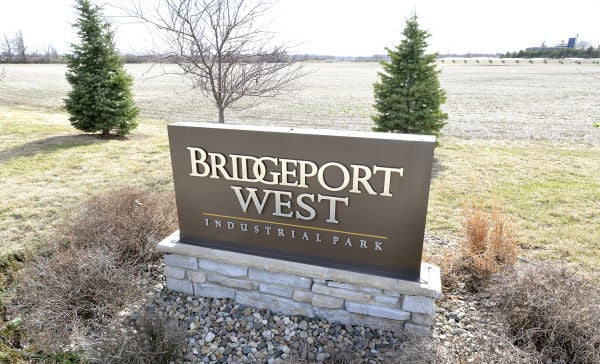 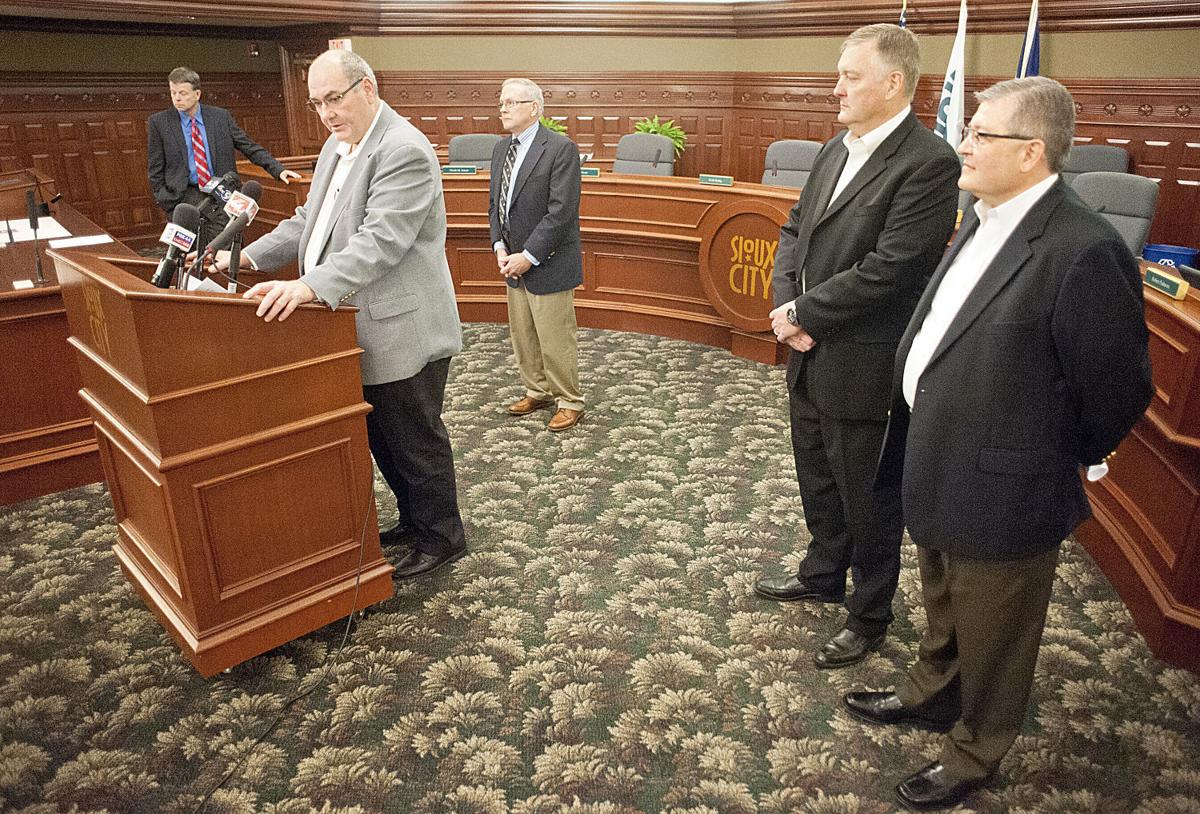 Mayor Bob Scott speaks at a news conference May 14 at City Hall as Seaboard Foods President and CEO Terry Holton, left, and Triumph Foods CEO Mark Campbell listen. Seaboard and Triumph announced plans for a $264 million pork plant with at least 1,100 jobs. It's believed to be the largest economic development project in city history. 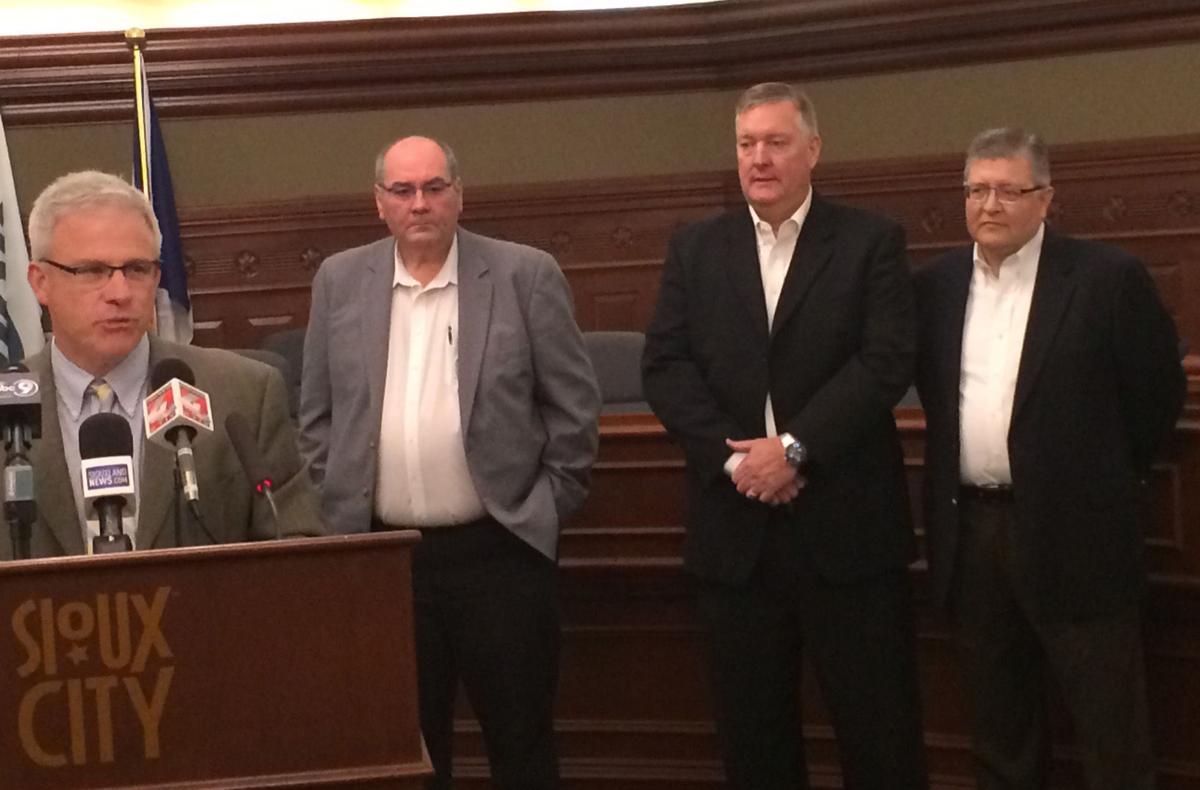 The mega project, a joint venture between Seaboard Foods and Triumph Foods, will give the growing metro area economy another big boost, and the city and other local governmental bodies millions of dollars of new revenue.

“This is a tremendous project that will greatly impact the growth of our region,” Mayor Bob Scott said.

Grading is expected to begin late this fall at the 250-acre site, former cropland in the Bridgeport industrial area, along the Missouri River and just north of Sioux Gateway Airport. An estimated 1,200 temporary construction workers will be deployed to build the 600,000-square-foot plant, with an anticipated opening in summer 2017.

The state-of-the-art facility, which will be designed with technologies to mitigate odors, will have the capacity to slaughter 10,000 to 12,000 hogs per day, or 3 million per year, expanding the market for independent pork producers in the tri-state region.

The plant is expected to ramp up employment slowly, starting with a single shift. But if market conditions permit and sufficient local labor is available, a second shift could be added in the future, which likely would result in an additional $50 million in capital investment and around 900 more jobs, Triumph Foods CEO Mark Campbell said.

The large-scale project, announced at a news conference at City Hall on Thursday morning, represents a major victory for local and state leaders, who spent more than four years recruiting the two companies.

Landing the new Seaboard Triumph plant nearly replaces the more than 1,300 meatpacking jobs the city lost when the John Morrell pork plant closed in April 2010. That aging facility, which has since been demolished, had been the last major slaughter plant in a city that built its fortunes on meatpacking and once boasted the world’s largest stockyards.

In the aftermath of the Morrell plant shutdown, Scott said he reached out to Triumph executives for the first time in early 2012, just a month into his current term as mayor. The two sides regularly stayed in contact, but talks didn't heat up until about six months ago, he said.

To help attract the new plant, the city and state pledged a package of tax breaks and job training assistance worth about $27 million. The City Council and Iowa Economic Development Authority Board are expected to give final approval to their incentive packages at separate meetings next week.

Government officials emphasize the public investment will be repaid many times over, through the tens of millions of dollars in additional taxes and water and sewer fees the plant will generate during its life. The plant will quickly become the city's largest water and wastewater customer, generating enough revenue for city leaders to forgo a previously planned increase in water and sewer rates for all users. (See related story).

The plant owners also have accepted a minimum assessment of $100 million, which, by far, is the largest valuation on a commercial or industrial property in city history, Scott said.

The city has agreed to waive about $7.7 million in property taxes levied in the first five years, based on a formula that gradually reduces the exempted amount, but the owners will stay pay about $10 million in taxes during that period.

In exchange for the incentives, the plant operators also pledged to create at least 902 production jobs at a starting average wage in excess of $15 per hour, and 208 management and administrative positions at salaries averaging $53,000 per year.

With scheduled overtime, the hourly wage for production jobs is expected to grow to $16.28, while the office jobs will rise to $63,000 per year, city Economic Development Director Marty Dougherty said.

Those figures do not count health care coverage or other benefits, which are expected to average about $9,000 per employee.

Local leaders said the new plant's $48 million-a-year payroll and spending on materials, supplies and services will ripple through the local economy and create added sales for a host of ancillary businesses, from truck drivers to pallet makers to cold storage warehouses.

"There will be so many opportunities," City Councilman Dan Moore said during the news conference.

The arrival of the plant may exacerbate the metro area's already tight labor market and growing housing shortage. In March, metro unemployment stood at 4.4 percent, unchanged from the previous month.

Because it will take more than two years to build the new plant, the company and the community will have time to address the need for more workers, Scott said. One frequently talked-about option would be to recruit more immigrant labor, which in more recent years has included a number of workers who immigrated to the U.S. from African nations.

The $2 billion expansion of CF Industries' nitrogen complex at Port Neal has strained the labor market and the supply of rental housing. The construction has entered the second full year, with about 2,500 construction workers at the rural Woodbury County site, just south of Sioux City.

“CF is gobbling up a lot of the rentals and homes in our market right now,” said Kyle Kelly, broker owner of Century 21 ProLink in Sioux City. “A lot of those temporary workers that are coming are going to be leaving at the same time (the new pork plant) is ramping up, so there could be a very good and natural transition into them taking over some of (the units.)

Prior to Thursday's announcement, details of the pork project had been kept under wraps to avoid premature disclosure that could have violated U.S. Security and Exchange Commission rules. Seaboard Foods is a division of publicly traded Seaboard Corp., a Merriam, Kan.-based diversified global conglomerate that operates a number of agricultural and ocean transport businesses.

Seaboard Foods and St. Joseph, Mo.-based Triumph Foods are both large integrated pork producers that control production every step of the way, from before the farm to the plate. The two companies have cooperated on several ventures in the past year. Seaboard Foods, for example, markets and sells pork produced by Triumph to domestic and international markets.

Without the combined resources and experience of the two firms, the project would not have happened, company officials said.

Seaboard and Triumph officials considered several sites in other states before settling on Sioux City. East Moline, Ill., part of the Quad Cities area that includes Davenport, Iowa, was a contender at one time, but three years ago, Triumph Foods broke off talks with local officials there, partially citing the economy, according to a story in the Quad-City Times.

Holton and Campbell said they were impressed with the shovel-ready site in Sioux City's Bridgeport West industrial park. The company will buy the 250 acres from the city for $21,500 per acre, or nearly $5.4 million.

"The city has done a fantastic job of making sure there's a viable site and the infrastructure is there and ready to go," Holton said.

Sioux City's rich meatpacking ties also were a factor in the decision-making process, he said.

"To come into a city that is accepting of us -- because not every city is accepting -- was very appreciated," he said.

The Sioux City plant will be the first all-new pork slaughter facility built in the U.S. in a decade. The last was Triumph's plant in St. Joseph, which opened in 2006.

The northwest Missouri plant, which slaughters and processes 6 million hogs per year, employs 2,800. Its design is similar to the facility that will be built in Sioux City.

Triumph is owned by five member-owned pork producers in Iowa, Nebraska, Minnesota, Kansas, Illinois and Oklahoma. Seaboard Foods owns hog farms in Oklahoma, Kansas, Colorado and Texas and processes more than 5 million hogs a year at its Guymon, Oklahoma, plant. That facility, which opened in 1996, employs about 5,000.

If Seaboard Foods and Triumph Foods were considered a single combined entity, they would rank as the second-largest hog producer, a top 5 U.S. pork processor, and one of the nation's leading exporters of pork, according to a joint news release.

Daily’s, which makes smoked bacon, hams and sausages, announced last month it will invest $41.5 million to open a third plant, in St. Joseph, next to the Triumph Foods plant.

Expected cost, in millions of dollars, for a new pork plant to be built in Sioux City

Number of jobs that will be created initially

Number of hogs that will be slaughtered annually at the plant

Annual average salaries for the 208 management and administrative personnel

The sale of 250 city-owned acres for a proposed $264 million pork plant in Sioux City easily cleared its first hurdle Monday.

A $264 million pork plant unveiled in Sioux City last week is drawing cheers and questions from some key players in the metro area.

5 top business moments in Siouxland in 2015

2015 was a year of big economic news in Siouxland, from the unveiling of major job-creating projects to legal tussles with millions of dollars at stake.

Timeline of stories from the announcement and construction of the Seaboard Triumph Foods plant.

Woodbury County officials will cover a few stop signs and post deputies to direct morning and afternoon traffic as a way to ease rush-hour gridlock near the expanding CF Industries plant south of Sioux City.

Seaboard Foods president and CEO Terry Holton speaks at a press conference at City Hall in Sioux City, Iowa on Thursday, May, 14, 2015. Triump…

Click here for a map of the planned Sioux City pork plant.

Speakout: How will the new pork plant affect Siouxland?

How will the new pork plant affect Siouxland?

A news conference has been scheduled for 9 a.m. Thursday to unveil details of a major economic-development project for Sioux City.

Betters left behind $6.5 million at the Hard Rock Hotel & Casino Sioux City in April, as the downtown venue posted a third straight month of solid revenues.

City and state officials are poised this week to advance a series of financial incentives that helped attract a $264 million pork plant to Sioux City.

The Iowa Economic Development Board on Friday approved $13.2 million worth of tax incentives for the proposed Seaboard Triumph Foods pork plant in Sioux City.

Ken Gard's 50-year history of marketing hogs in Sioux City ended -- at least temporarily -- with the closing of the John Morrell plant in April 2010.

Call center to open in North Sioux City, add up to 100 jobs

Mayor Bob Scott speaks at a news conference May 14 at City Hall as Seaboard Foods President and CEO Terry Holton, left, and Triumph Foods CEO Mark Campbell listen. Seaboard and Triumph announced plans for a $264 million pork plant with at least 1,100 jobs. It's believed to be the largest economic development project in city history. 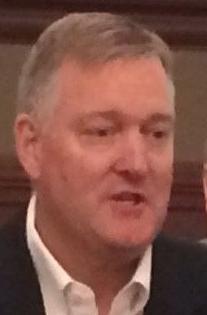 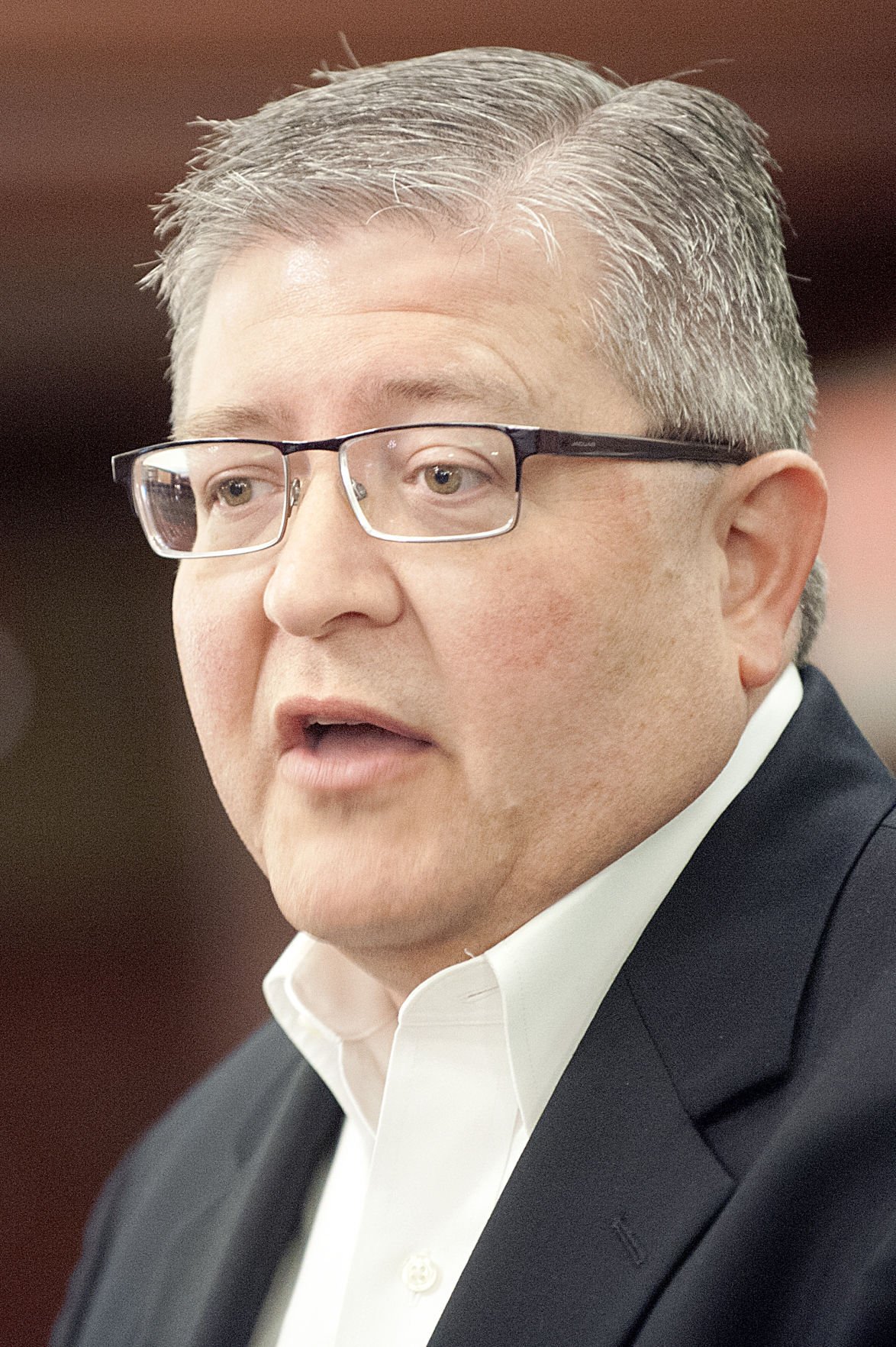 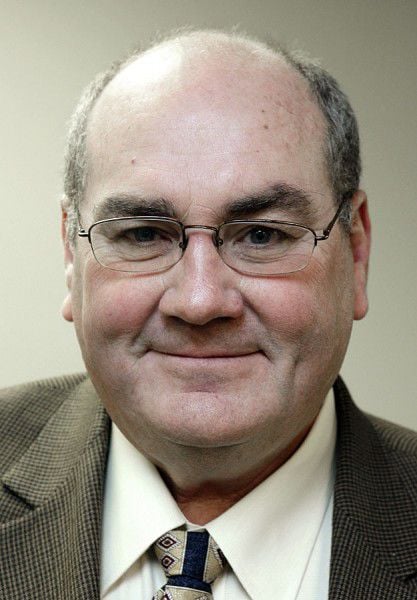