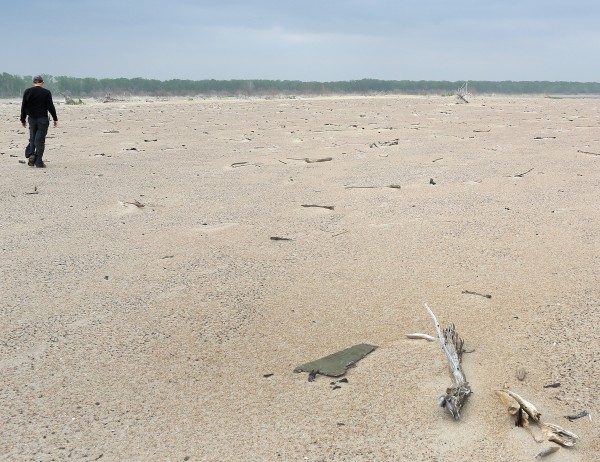 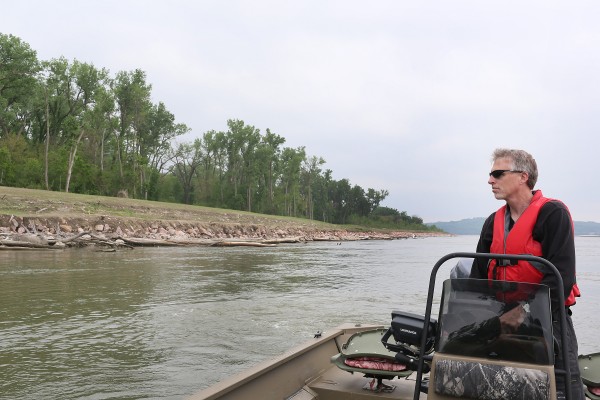 Tim Cowman, of the University of South Dakota Missouri River Institute, guides a boat past areas near Vermillion, S.D., impacted by 2011 flooding, on May 29. Ecosystems have had to adapt to changes forced by the flood. 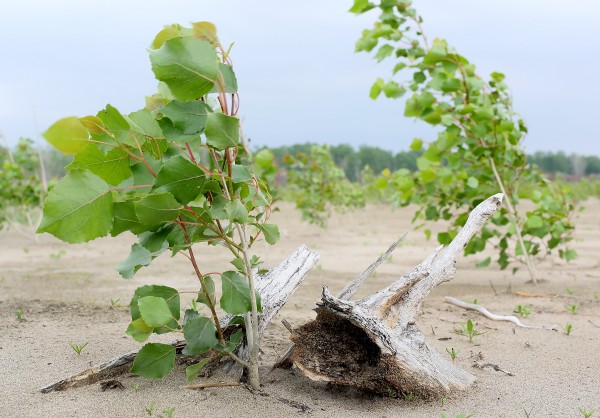 Cottonwood trees pierce a Missouri River sandbar near Vermillion, S.D., on May 29. The 2011 flood buried environmentally diverse wetlands under several feet of sand. 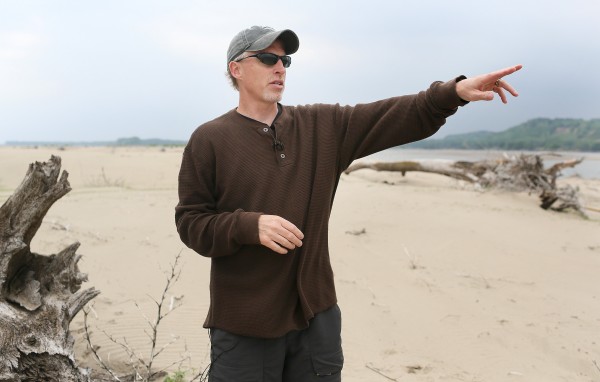 Tim Cowman, director of the University of South Dakota's Missouri River Institute, points out a reserve area on a sand bar in the Missouri River near Vermillion, S.D., on May 29. "This area, with the way it's taking off, has the potential to be cottonwood forest. This could be the next generation of trees right here," he says.

VERMILLION, S.D. | With nearly every step he takes, Tim Cowman's shoes sink into the soft sand that once was at the bottom of the Missouri River.

This area near Clay County Park was once a complex of small, vegetation-topped islands with shallow river channels slowly winding through them.

Now, it's almost all sand, deposited during the 2011 flood. The tops of the islands are still visible, crowned by dead brush that was unable to survive weeks beneath the flood waters.

Near the river's main channel, the island is desolate. Pieces of driftwood litter what could pass for an ocean beach.

Cowman walks farther inland toward the former shoreline and stops near a stand of dozens of year-old cottonwood saplings, many already 5-6 feet tall, fighting to stand straight against the gusty wind. Just behind them is a grassy area that retains a small backwater marked with several sets of deer tracks. Beyond that is a line of dead red cedar and Russian olive trees, two invasive species that were killed off by the flood in this spot.

Cowman speaks optimistically about the site. Those nuisance trees choke out a cottonwood forest's understory, and since the Missouri River dams limit the periodic flooding that once kept such species in check, they have thrived.

When the flood waters inundated the area two years ago, the river returned to its old ways of regenerating the environment and ecosystems through which it flows.

"This area, with the way it's taking off, has the potential to be cottonwood forest. This could be the next generation of trees right here," said Cowman, director of the University of South Dakota's Missouri River Institute, as he looks at all the young cottonwoods thriving in the new terrain.

Since the flood, Cowman and other researchers have watched the Missouri River's environment and ecosystems adapt to changes forced upon them by the flood. On the positive side, invasive species such as cedar and olive trees and purple loosestrife have been eradicated in some areas. Thousands of young cottonwood trees are growing. Fish are thriving because of new backwater areas that were formed.

But the river also buried environmentally diverse wetlands under several feet of sand. Channel degradation has deepened the river in places, leaving less water for side channels and backwaters to support plankton, microorganisms and young fish. Healthy cottonwood trees are collapsing because of root damage sustained during the flood.

It could take years for other effects, good or bad, to surface, Cowman said.

"It's been an opportunity for us to learn what type of changes happen after a flood and how does the river react to those changes," he said. "There's definitely a lot that we don't know yet."

Since the Missouri River dams were completed in the 1950s and 1960s, flooding has been reduced. The 2011 flood, when above-normal spring rainfall and snowmelt combined to overwhelm the reservoir system, was the first since then that was similar to flooding that was once common.

For researchers, this is the first time they've been able to witness a flood's effect on the Missouri River ecosystems from Yankton, S.D., to Ponca, Neb., a wide, unchannelized reach of the river that still functions much like it did prior to the dams.

The flood “definitely did some good things ecologically. Floods are a natural part of the river. It's a way for ecosystems to recharge," said Sam Stukel, a South Dakota Department of Game, Fish & Parks fisheries biologist.

Stukel said the swift flood waters cut deeper into the channel, but that helped create more than 100 shallow, still-water pockets ideal for fish spawning and growth of plankton that young fish feed on.

"Those types of areas were pretty rare before," Stukel said. "From a fisherman's standpoint, these things are good."

Some of those new backwaters, Stukel said, will naturally become cut off from the river and turn into wetlands or small ponds, creating habitat for waterfowl and other land animals.

That transformation will be needed to replace areas the flood ruined.

Cowman pulls his boat up to a long strip of sand near the Newcastle-Vermillion Bridge. What was once a mile-long wetlands complex of reeds and backwater now lies beneath several feet of sand.

"Now it's like walking on one big beach," Cowman said. "It's really changed the environment here."

Animals that lived here two years ago have moved on. Plants struggle to take root on the high, sandy dunes. Up on the bank, dead cottonwood trees lie on the ground, their roots intact. After standing in several feet of water for weeks, their root systems were weakened and could no longer hold the trees in the ground during wind gusts they normally would easily withstand. Scientists are unsure if the trees still standing will regenerate their root systems or if more will die.

Areas of new sand deposits and cottonwood death present an interesting study, said Mark Dixon, an assistant professor of biology at USD who's affiliated with the Missouri River Institute.

A lot of young forest vegetation was either washed away or killed by standing water. With all that lost habitat, fewer song birds now live along the river. But new plant life, especially cottonwood saplings, is taking root in the sandy ground that was left behind. Dixon said experts have said for years that the river needed floods for that natural regeneration, but when a river that's been modified suddenly has a big flood, the environment isn't used to it.

"Is it a restorative agent or a destructive agent?" Dixon asked. "We don't know if the areas of regeneration will be sustained. It's going to be an interesting thing to watch over the coming years."

Cowman will be closely watching a backwater area at Ponca State Park that could eventually vanish. During the flood, the river's channel next to the area both deepened and changed course. The deeper channel now holds more water, leaving less to spread into the backwater areas containing slow-moving water ideal for many species that make up the bottom links of the river's food chain.

He points to pools of water now too shallow to sustain much aquatic life.

"I have never seen these backwaters this low," he said. "It's definitely a negative impact from bed degradation during the flood."

Degradation isn't the only threat. The channel changed course during the flood and now curves right at the backwater area and has begun eroding it. It's possible the entire area could be lost to erosion, Cowman said.

"These backwaters are unique because they exist at a state park, so they're very accessible to the public. It would be a shame to lose these," Cowman said.

Years of research and observation remain. Dixon is studying environmental changes along the channelized portion of the river from Ponca to Omaha this summer. Findings could be different from what he's found in the Yankton to Ponca reach, he said.

Christopher J. Svendsen, a U.S. Army Corps of Engineers hydraulic engineer, said corps officials have observed many of the same changes. The corps will continue its regular river stabilization programs, and has none planned to respond to environmental changes caused by the flood.

"The corps has many programs related to Missouri River stability and mitigation, however the flood of 2011 has not altered the scope of any programs," Svendsen said. "The corps actions are authorized by Congress with funds appropriated for specific tasks. ... the corps does not have a general authority to mitigate 2011 flood damages. In general, nature will take its course."

The river is already chewing away at those sandbars. How fast they erode will determine how many of those birds and trees survive. When releases from Gavins Point Dam at Yankton reach their normal summer flows, sandy areas now high and dry will be under water, creating new pools of slow-moving water and side channels.

"Really, the river is trying to get back to a similar state as it was before," Cowman said.

Plant and animal life in and around the river will continue to adjust. The Missouri River, Cowman said, remembers how it responded to floods that once were so common.

"I think the river is going to respond naturally to the flood," Cowman said.

Above-average rainfall this spring in Montana and the Dakotas has improved outlooks for the Missouri River reservoir system.

Despite above normal runoff above Sioux City in August, runoff into the upper Missouri River Basin is expected to remain below normal for the year.

OMAHA | Runoff into the upper Missouri River basin could near record levels for the month of October, but managers of the river's reservoirs e…

The University of South Dakota's Missouri River Institute has scheduled its annual Research Symposium for April 10 on the USD campus in Vermillion.

Click here for photos of the Missouri River flood

Every fall, Paul Blatchford puts his boat into the Missouri River and heads to a shallow water area near Ponca State Park to hunt ducks.

VERMILLION, S.D. -- National parks administrators picture canoers and kayakers paddling down the Missouri River and stopping for the night to …

Tim Cowman, of the University of South Dakota Missouri River Institute, guides a boat past areas near Vermillion, S.D., impacted by 2011 flooding, on May 29. Ecosystems have had to adapt to changes forced by the flood.

Cottonwood trees pierce a Missouri River sandbar near Vermillion, S.D., on May 29. The 2011 flood buried environmentally diverse wetlands under several feet of sand.

Tim Cowman, director of the University of South Dakota's Missouri River Institute, points out a reserve area on a sand bar in the Missouri River near Vermillion, S.D., on May 29. "This area, with the way it's taking off, has the potential to be cottonwood forest. This could be the next generation of trees right here," he says. 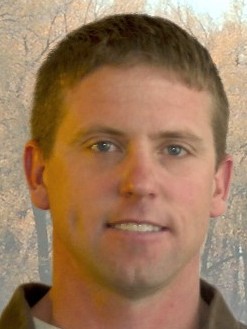 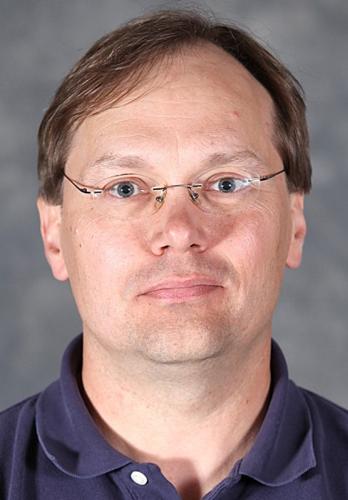