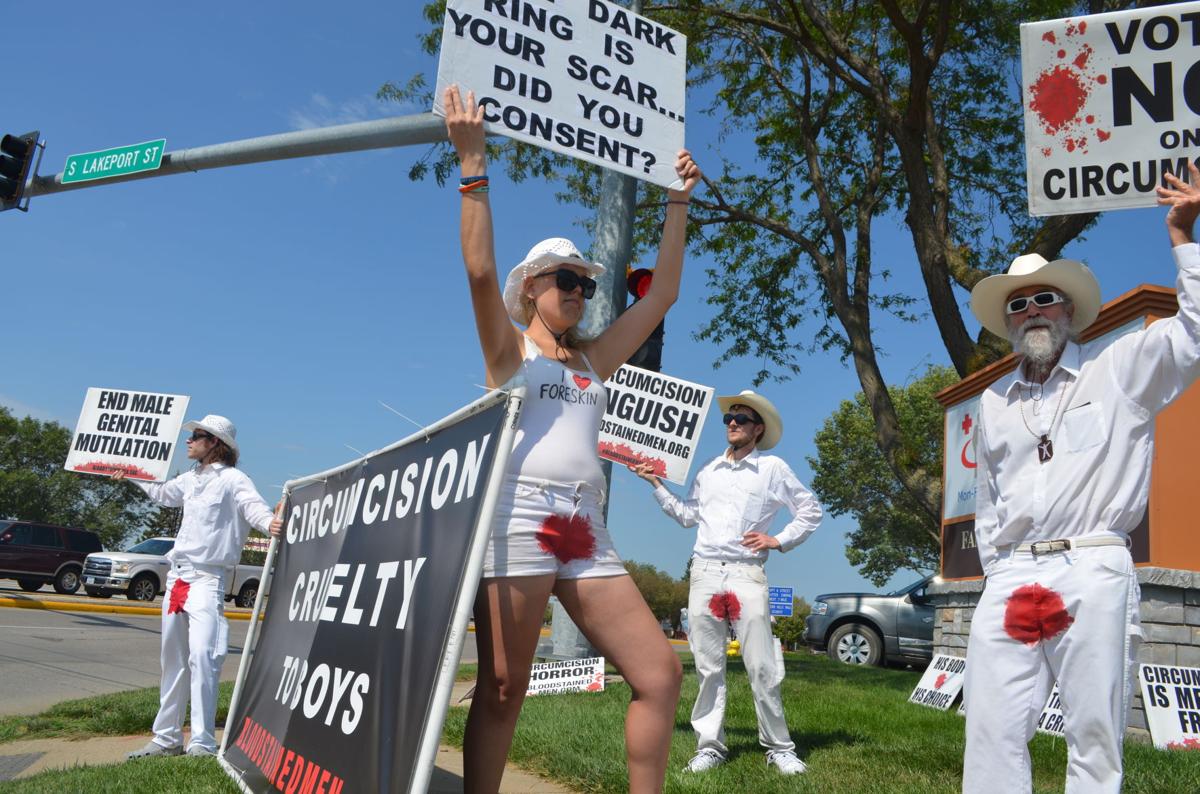 Bloodstained Men & Their Friends, a California-based group of anti-circumcision based "intactivists," visited Sioux City on Monday. Pictured are  Brett Johnson, David Atkinson, Anastasia Van Buskirk and Brother K, the founder of the group. 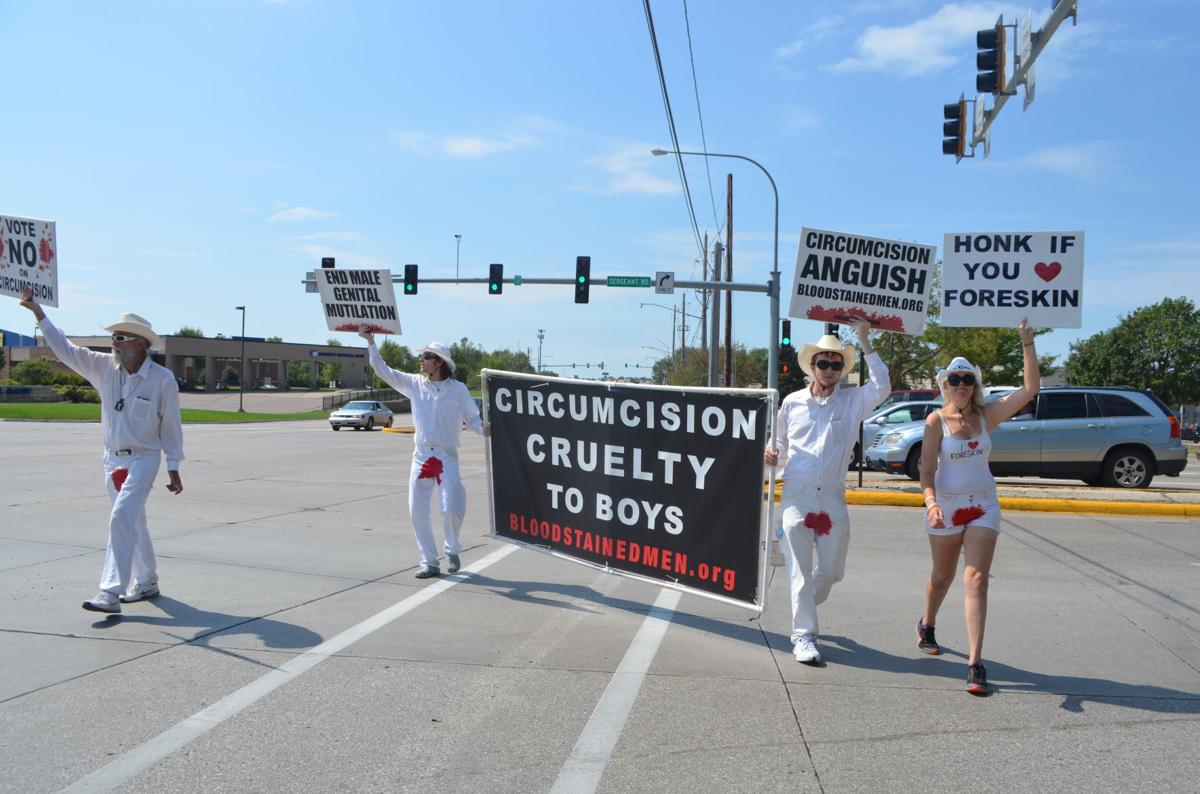 SIOUX CITY | The demonstrators wore all-white costumes with their groin areas stained red, and waved signs reading "End Genital Mutilation" and "Vote No On Circumcision." Cars honked as they drove by.

The California-based group, Bloodstained Men & their Friends, stationed themselves at the intersection of Sergeant Road and South Lakeport Street on Monday, and they had one goal for their visit: bring greater foreskin awareness to Siouxland.

The founder of Bloodstained Men, who legally changed his name to Brother K, and his fellow "intactivists" have a lot to say about the American custom of circumcision. None of it positive.

Brother K said he wants to convey the message to parents that "circumcision is worthless, harmful, destructive and cruel." He pointed out that, statistically, most circumcised men in the world are Americans and Muslims.

"Parents don't know that. Many parents think that circumcision is, like a world norm -- it's not," he said.

Bloodstained Men demonstrates in 60 cities per year, he said. The group has felt a shift in how people feel about circumcisions, based on their reactions.

"Every year that we do that this, we're getting more public support, and less jeers from the public," Brother K said.

There are still some jeers, including Monday in Sioux City.

"A pickup truck went by, and a man behind the driver's seat, he didn't shout anything, he just silently gave us the finger," Brother K said. "It could be New York City, it could be San Francisco, it can be Sioux City, Iowa. People are the same everywhere, and the way that men react to circumcision is the same everywhere. We call it 'circum-rage.'"

The sign carried by Brother K read "Vote No On Circumcision." Circumcision, of course, is not something normally encountered on the ballot.

"People say, 'When's the vote?' and I say, 'You vote when your son is born, or when your grandson is born, you say no,'" Brother K said.

While there are no recent figures on male circumcision rates in the U.S., the group feels it is making headway. As recently as 2000, at least 61 percent of American newborns were circumcised, according to the World Health Organization.

The rate of male babies being circumcised has seen its ups and downs since then, but the general trend has been slowly downward, according to a CDC report.

"The anecdoctal evidence that we're getting from doctors and nurses, people who work in hospitals, is that the circumcision rate in the United States is collapsing dramatically," Brother K said.

According to the CDC, the region with the highest rate of circumcision is by far the Midwest, where about 71 percent of babies were circumcised in 2010. On the West Coast, the rate was only 40 percent.

"Our founding fathers were not circumcised," Brother K said. "There was no history of circumcision in the English-speaking nations, ever, or in Christianity for that matter."

Fellow intactivist David Atkinson, who plans the locations for the trips, says he decided the group would stop here during their tour of the region, largely because of the size of Sioux City. During their 17-city Northern Heartland protests, the group has been to Des Moines, Cedar Rapids, Lincoln and Omaha. The group is next heading to North and South Dakota.

Bloodstained Men, Atkinson said, has been to most states and large cities in the U.S., except New Hampshire, New Mexico and Wyoming.

SIOUX CITY | Planned Parenthood of the Heartland will close its Sioux City clinic at the end of June, affecting more than 5,000 people in the …

SIOUX CITY | West High School students plan to participate in a "Red Sand Project" Tuesday as a form of protest against human trafficking.

Bloodstained Men & Their Friends, a California-based group of anti-circumcision based "intactivists," visited Sioux City on Monday. Pictured are  Brett Johnson, David Atkinson, Anastasia Van Buskirk and Brother K, the founder of the group.