During the tour, which Sorensen hopes to wrap up next fall or winter, he honors veterans by painting military-themed murals on large boulders in each of the state's 99 counties. He has completed rocks in every Northwest Iowa county.

Although Sorensen said he had great art teachers in primary and secondary school who "pushed him along," he really didn't get into painting until he majored in art and design at Iowa State University.

"I just sort of started expanding my mediums and things that I was experimenting with. I'd always kind of wanted to try murals out," he said. "That's kind of what led me down this road." 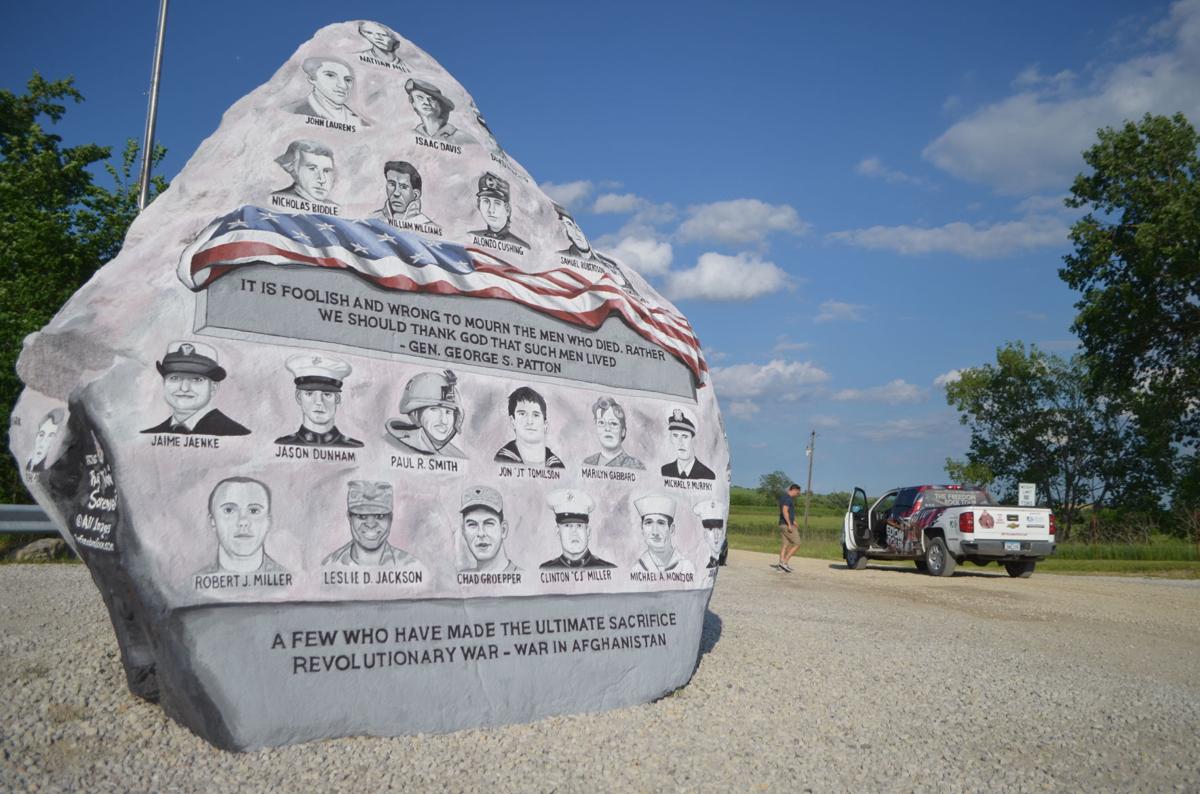 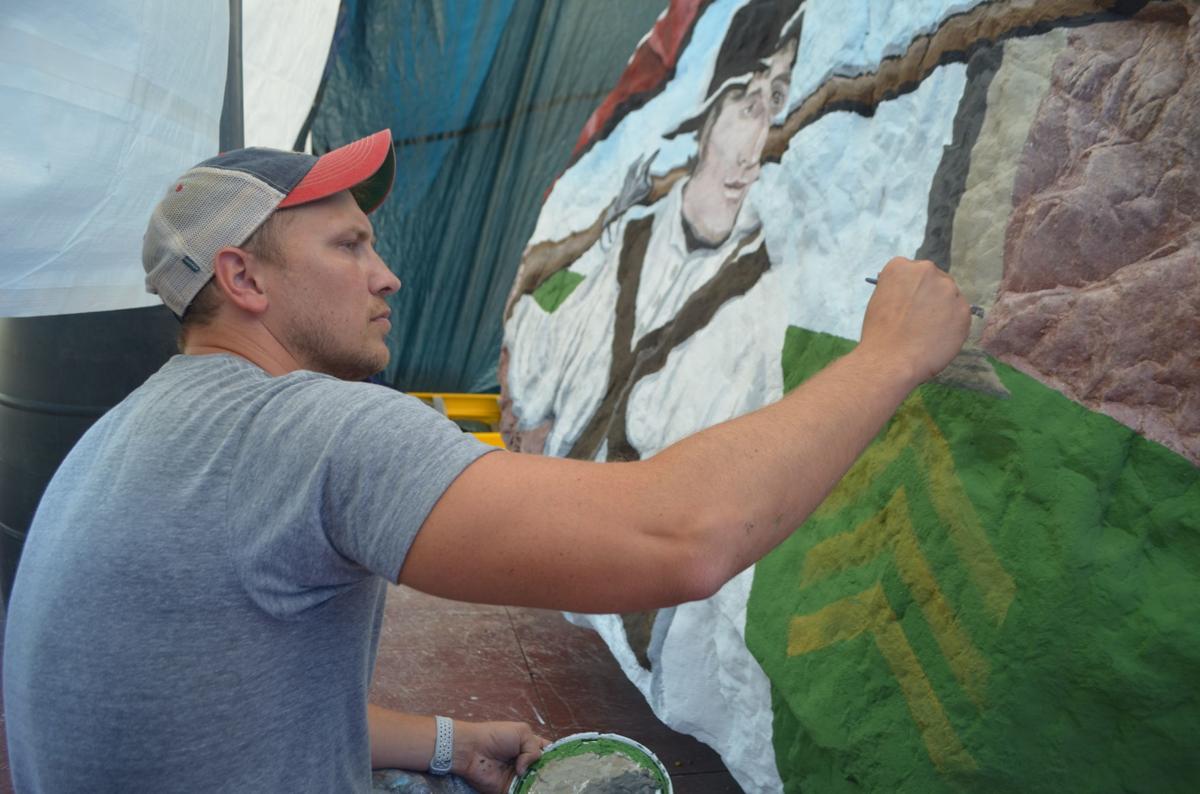 Artist Ray "Bubba" Sorensen II paints the Woodbury County Freedom Rock in Anthon, Iowa, in 2017. The rock is located at the Anthon Community Center on the east side of town. 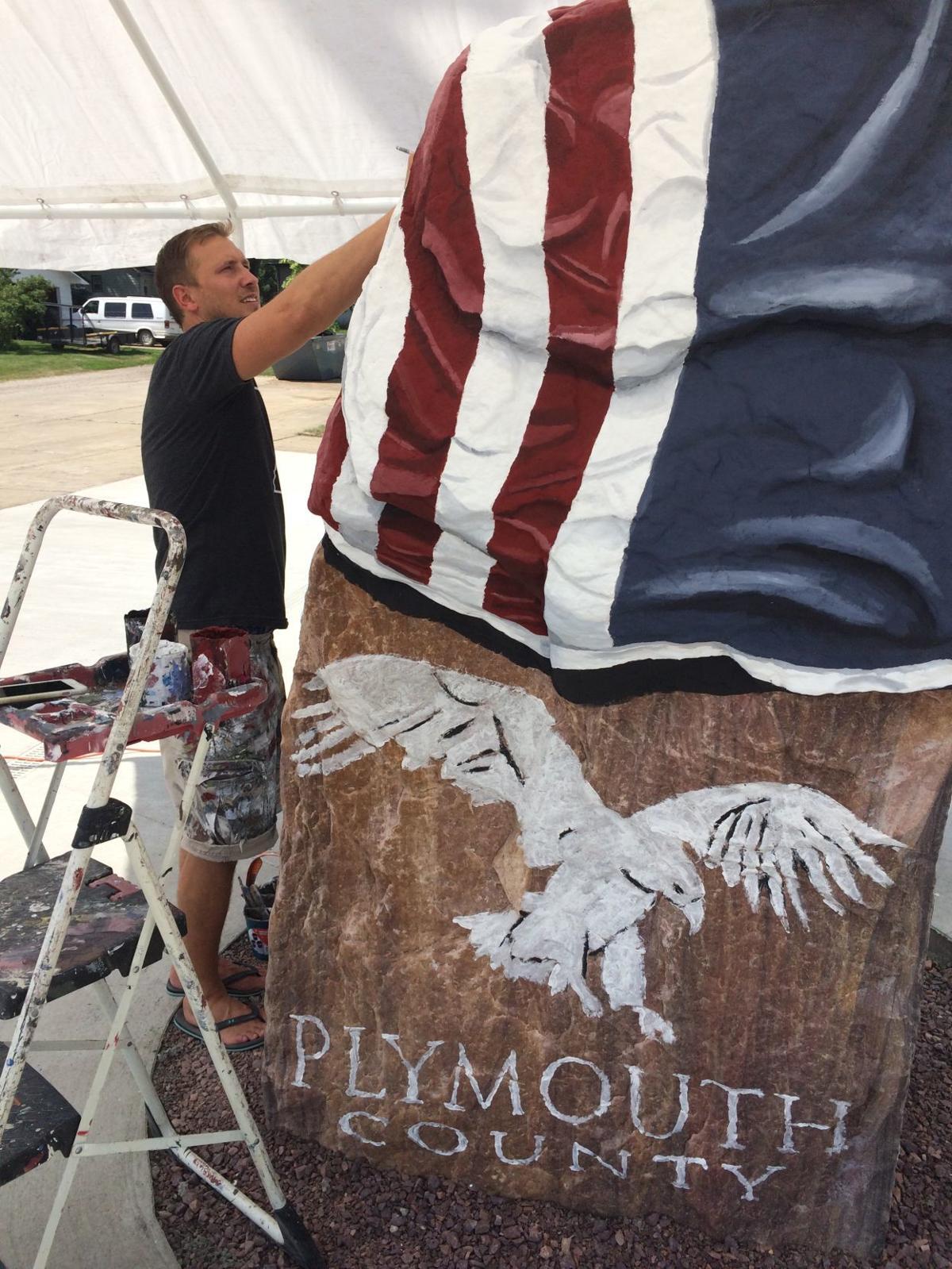 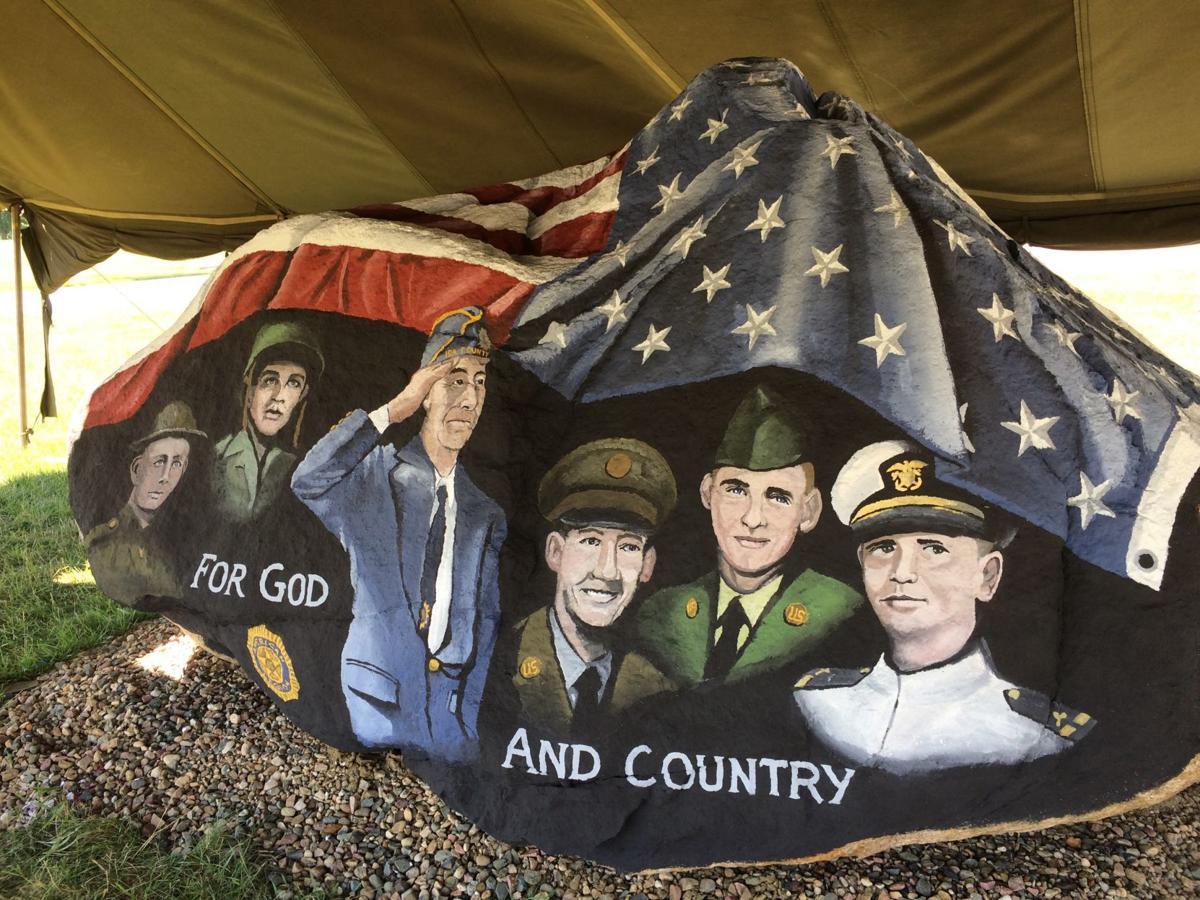 The Ida County Freedom Rock was kept under a tent shortly after its completion in late June 2017 by artist Ray "Bubba" Sorensen II. The rock stands just north of Highway 20 at Holstein, Iowa, along the community's "Avenue of Flags" area. 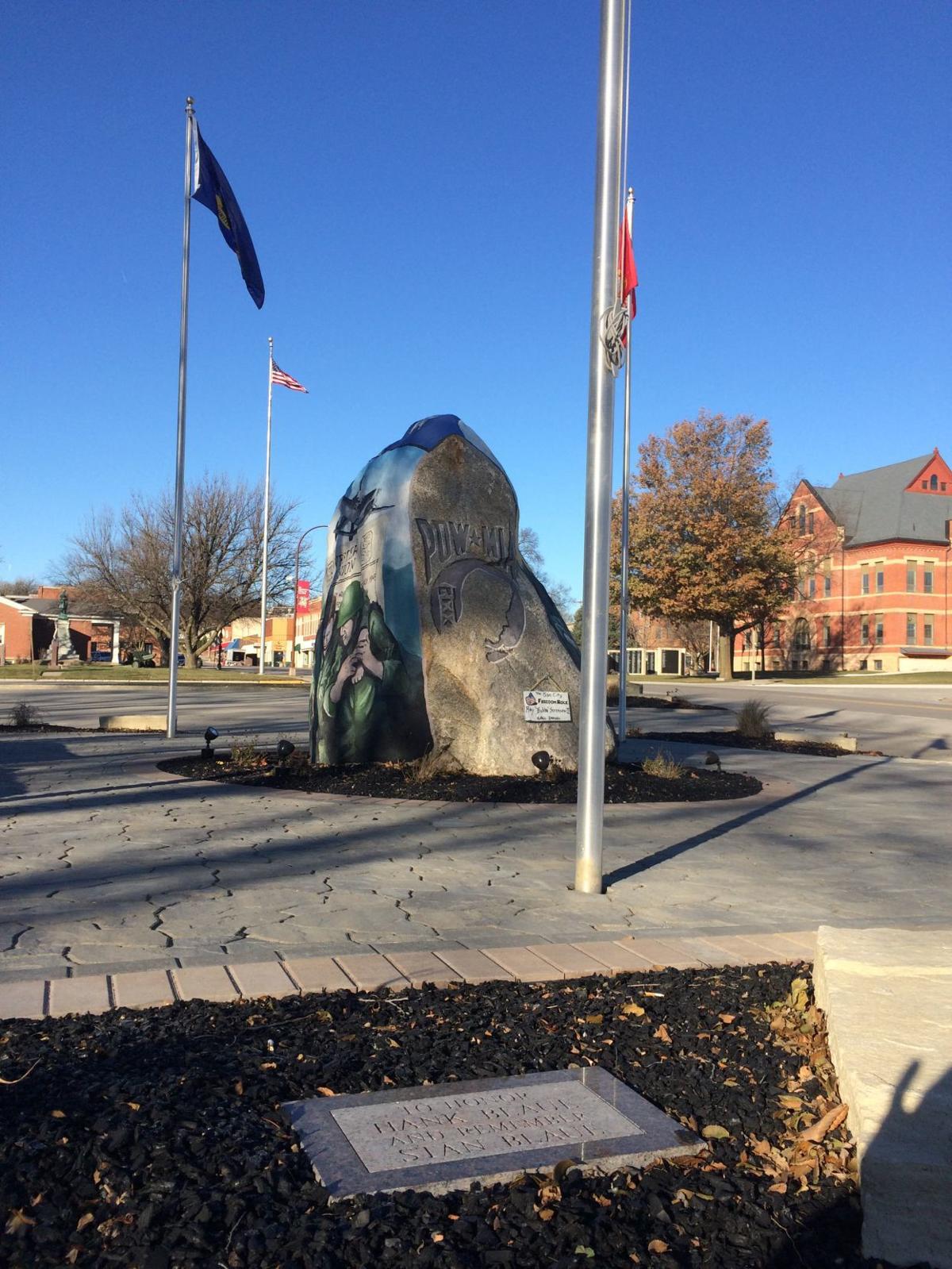 Landscaping and pavers were added to the Sac County Freedom Rock site just east of downtown Sac City, Iowa, in 2017, thanks to a gift from the estate of the late John Criss. 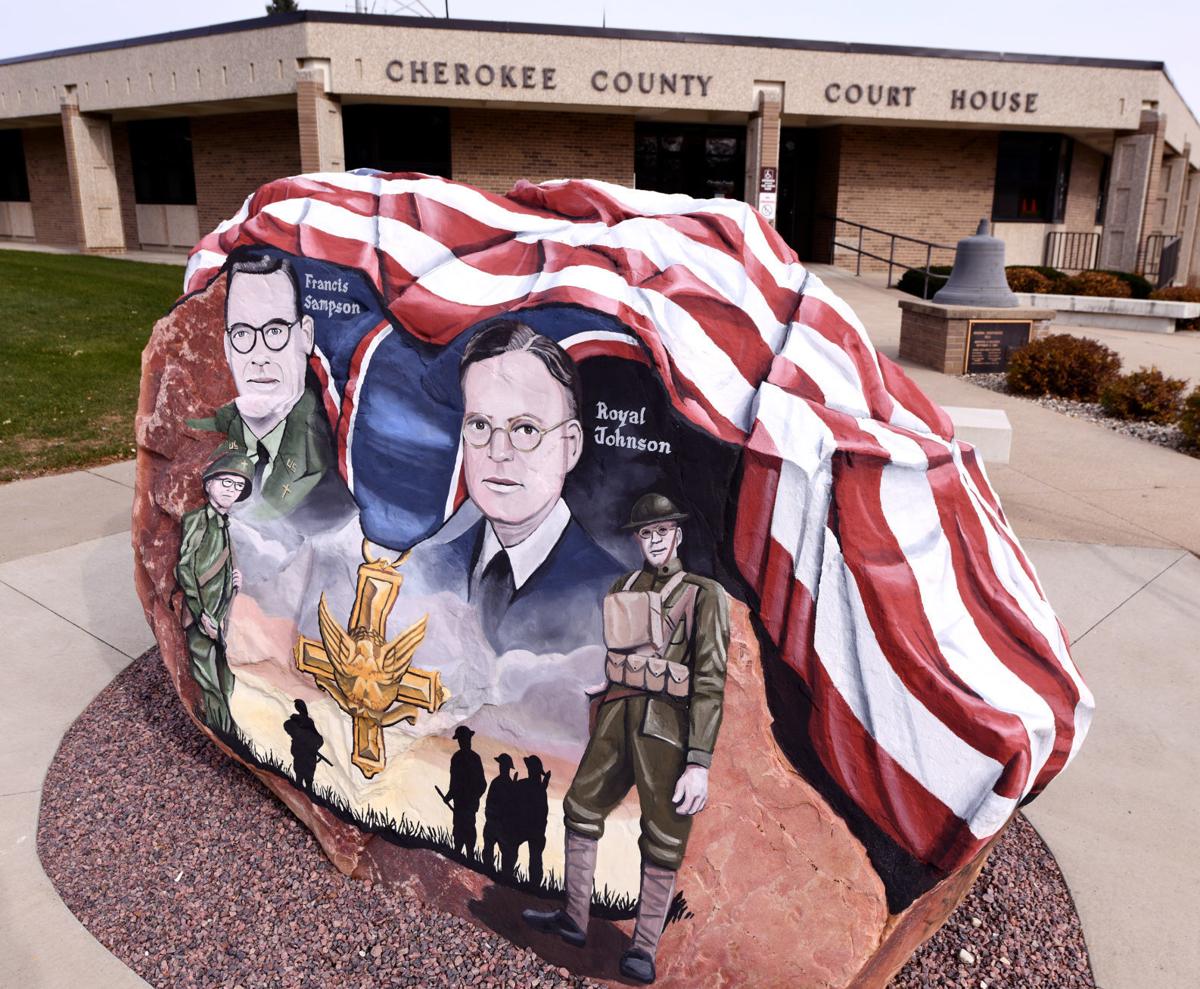 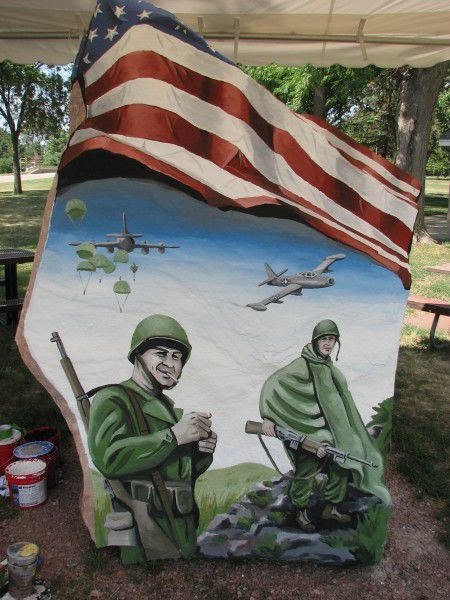 The U.S. flag is featured at the top of the Sioux County Freedom Rock in Hawarden, Iowa. 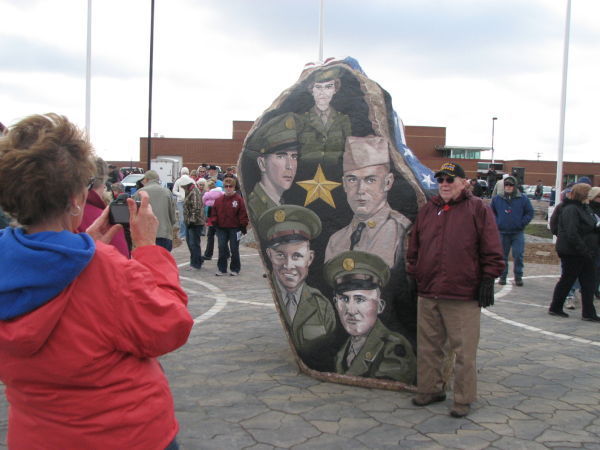 Marilyn Gath, left, takes a photo of her father, Ernest Gath, of Spirit Lake, Iowa, at the Dickinson County Freedom Rock/Veterans Memorial in Lake Park, Iowa, in 2013. Gath's brother, the late Ed Gath, is depicted in a painting just to the right of the Gold Star.

In 1999, Sorensen asked permission to paint a large boulder near Menlo, Iowa. The 60-ton rock, which is located one mile south of Interstate 80, off exit 86, had been a popular spot for graffiti. He painted "Thank you veterans for our freedom" and the flag raising at Iwo Jima.

After the rock was eventually graffitied over, a group of veterans asked Sorensen if he would go out and paint the same thing for Memorial Day. Instead, he changed the mural.

"It just kind of snowballed from there. Every May, I go out and paint a different 'Thank you' for our veterans," said Sorensen, who doesn't get paid for the murals he paints on Freedom Rocks. "I've always said I'll continue to do it as long as I can afford the paint and afford the time."

After Sorensen started a mural painting and photography business with his wife in 2008, they came up with the idea for the Freedom Rock Tour, which touches all of Iowa's counties.

"I haven't served, so I feel like I and my family, we owe a debt of gratitude to the men and women that have served and are serving and standing at ready to defend this country. All it's done is just deepen my appreciation and understanding of what our veterans are done and are doing," Sorensen said of the tour.

Sorensen said he paints as few as 10 and as many as 16 rocks in a year. He even painted a rock in Wisconsin in January. Each mural takes 1 to 2 weeks to complete, depending on size and complexity. As far as subject matter, Sorensen said that's decided by him and the Freedom Rock committees that naturally form at each site.

"I'm not so much concentrated on branch and each era and every single thing crammed onto each rock, but rather just tell interesting and inspiring stories at each spot," he said.

Sorensen said the original Freedom Rock is his favorite, simply because he's "the client" and has sole control of the theme. In celebration of the conclusion of the Iowa Freedom Rock Tour, Sorensen said he will paint a 100th rock. Towns will get to bid for the spot. Fifty percent of the proceeds from the auction, Sorensen said, will benefit a veterans' charity.

"The goal, of course, is to try to have one in all 50 states. That one is going to probably move at a little bit slower pace, but that's fine," he said.

Attending an event in which veterans are shown appreciation for their service can be an important step in helping them remember the value of that service. "Thank you for everything you've done," one official said Monday. "You are why I'm here today."

A new electronic database stores the 700-some photos and allows visitors to view them on a display at the courthouse or in person. But that left 774 images with no obvious place for storage.

Today is a far cry from 1993, when post commander Lee Fischer, fresh out of the Army, joined the VFW. Back then, the canteen drew crowds to listen to music, have a few drinks and socialize. 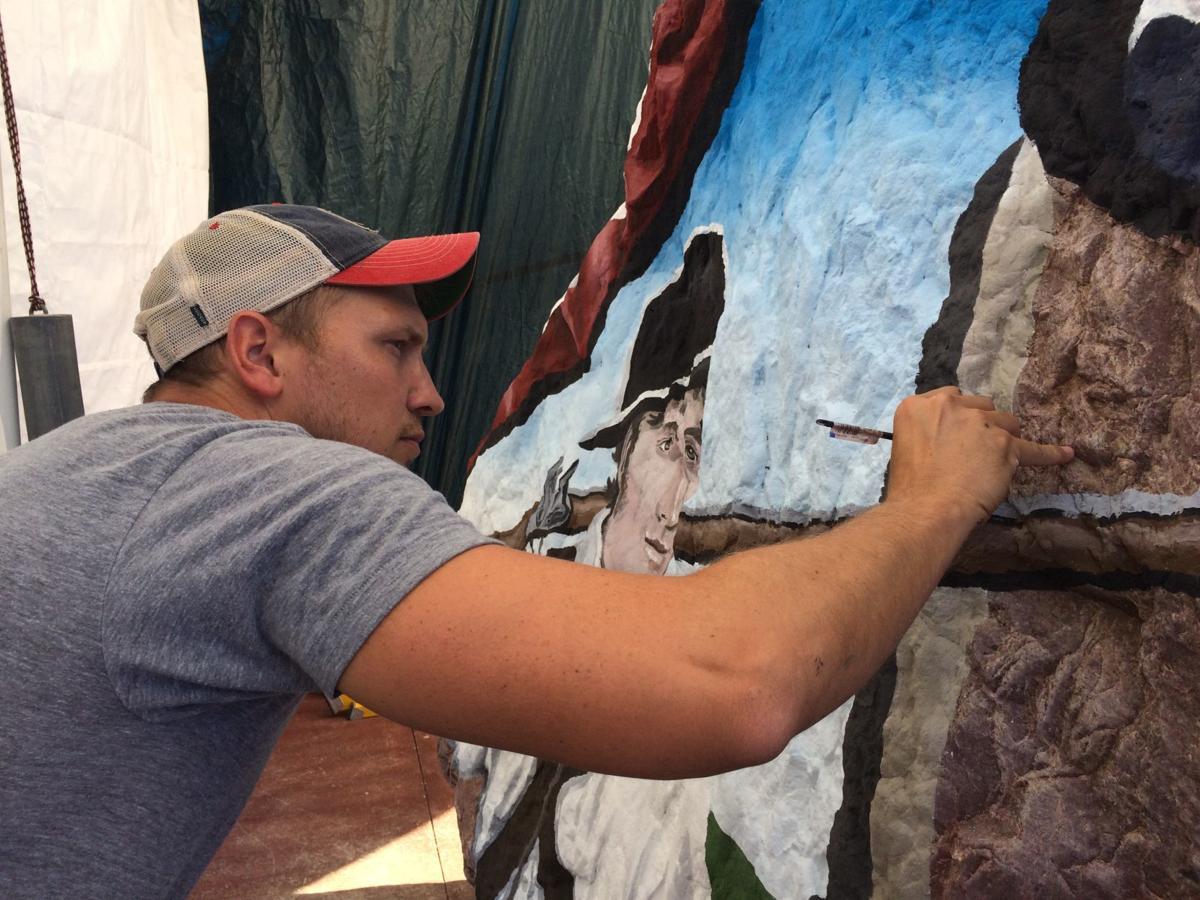 Artist Ray "Bubba" Sorensen II paints the Woodbury County Freedom Rock in Anthon, Iowa, on June 22, 2017. Sorensen has completed rocks honoring veterans in 87 of the state's 99 counties. He expects to finish the last 12 rocks -- all in eastern Iowa -- by next fall or winter.

The Ida County Freedom Rock was kept under a tent shortly after its completion in late June 2017 by artist Ray "Bubba" Sorensen II. The rock stands just north of Highway 20 at Holstein, Iowa, along the community's "Avenue of Flags" area.