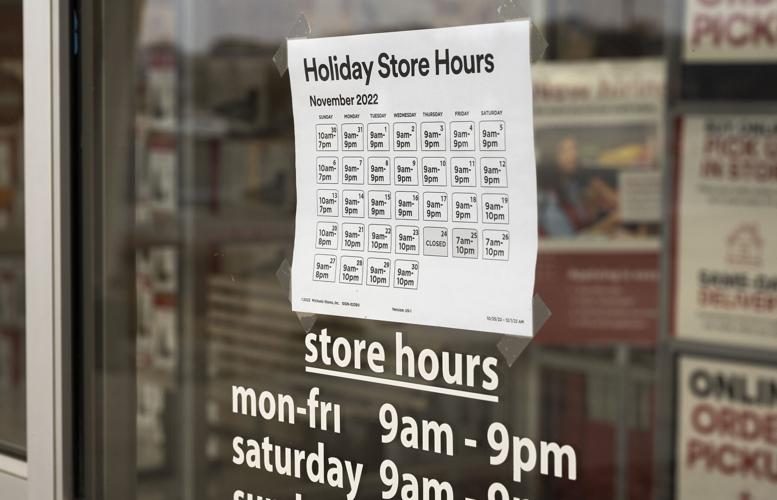 A sign that shows Michael's will be closed on Thanksgiving is displayed in the Lakeport Commons store's window. 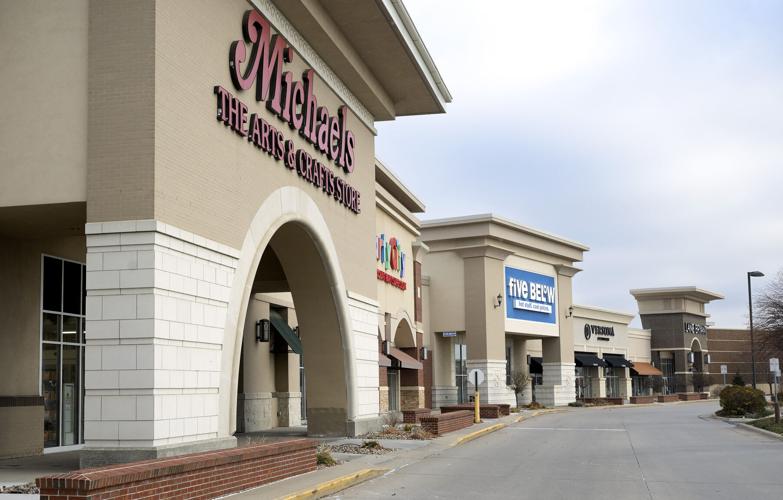 Storefronts are shown Nov. 11 at Sioux City's Lakeport Commons shopping area. Many retailers are closing on Thanksgiving and Christmas.

SIOUX CITY — All major Black Friday destinations in Sioux City will be closed  Thanksgiving Day this year, and many have deviated significantly from their Black Friday strategies of Novembers past.

The only retailers that are expected to be open Thanksgiving are Walgreens, the discounters Dollar General, Dollar Tree and Family Dollar, the grocer Save A Lot on Pierce Street and gas stations.

Nearly everything else will be closed on the holiday, in keeping with historic norms and leaving unchallenged the apparent demise of the trend of opening to customers on Turkey Day. What's more, few if any retailers are planning to open their doors during the middle-of-the-night hours the morning of Black Friday as they did in the past, and some aren't changing their store hours at all. The earliest Black Friday store openings in Sioux City will be 5 a.m.

The very notion of a Black Friday door-buster — in the sense of a frenzied mob of customers busting down an actual door at a physical store at an appointed hour in pursuit of deals — seems to be in decline as national retailers strive for a more orderly, online-oriented marathon of holiday shopping.

"I have noticed that a lot of retailers are changing up their Black Friday plans, where instead of having one day of really major savings, they're spreading them out," said Heather Korbe, director of marketing for Bomgaars, the Sioux City-based farm and ranch retailer. "That's something that's been trending for, I think, the last several years. That really started to trend pre-COVID, honestly,"

Korbe said the extended version of Black Friday this year may reflect retailers' concerns that shoppers are feeling the pinch of inflation and rising interest rates. "It's trying to reach customers and provide deals for them, you know, spreading it out over a month-long period or several weeks, versus one single day. Certainly gives (shoppers) more opportunity to be able to save and kind of spend for the holidays. Again, I think that very much is market-driven."

Bomgaars, she noted, will stick with a "very traditional Black Friday," though the chain has expanded its online sales presence in recent years and is planning Cyber Monday promotions.

Prior to 2020, retail chains had developed a habit of encroaching their Black Friday door-busters earlier and earlier into Thanksgiving Day itself, to the point that major chains like Shopko were opening as early as 2 p.m. on Thanksgiving.

Moving Black Friday into Thanksgiving Day was pioneered a little more than a decade ago by Kmart, followed by Sears and Toys "R" Us soon after. Within a few years retail chains began jockeying to be the earliest to open their doors on the holiday.

Whatever the competitive benefits of opening the doors on Thanksgiving, public opinion of the practice was broadly negative -- a survey last year conducted for the website The Real Deal found 68 percent of respondents felt stores should remain closed for the holiday. Social media groups with names like "Boycott Black Thursday" sprung up in protest, attracting followers in the hundreds of thousands. Online petitions asked stores not to open on Thanksgiving.

The pandemic brought about a tectonic shift in store schedules, with the once-prevalent 24-7 hours of operation vanishing almost completely in favor of closing stores overnight. That year, with more customers opting to shop online, chains that had been open Thanksgiving announced their doors would remain shut during the holiday.

Retailers across the board are upending the concept of Black Friday as a one-day, get-here-now affair of mega-deals, and most are doing all they can to lean into online shopping. Walmart, for instance, heavily promoted its "Black Friday Deals for Days," consisting of three multi-day "events" this month, plus Cyber Monday, Nov. 28.

Crumb., a mom-and-pop bakery in Sioux City, finds a following

Black Friday proper at Walmart will be all the more unusual given that the company is planning to open the doors at the same time they would on any other Friday: 6 a.m.

Target, likewise, spent the month promoting discounts and deals that could be had online long before Black Friday. The big-box department store is opening at a leisurely 7 a.m. on Black Friday, a mere hour earlier than usual and more than 12 hours later than Black Friday 2019.

The department store chain JCPenney, which began offering early Black Friday deals as early as Nov. 1, is planning a relatively conventional 5 a.m. opening on Black Friday. (JCPenney was once among the retailers opening at 2 p.m. Thanksgiving Day.) Department store Kohl's is also planning to open at 5, as is the outdoors and farm retailer Fleet Farm and the electronics retailer Best Buy.

Bomgaars is opening at 6 a.m., an hour and a half earlier than normal.

The Southern Hills Mall will open at 7 a.m.

Bed Bath & Beyond, seller of domestic goods, is opening at 6 a.m.

Rudolph's Shoe Mart, which is offering a "Thanksgiving Week Sale," opens at 9:30 a.m.

Karl's, a dealer in large appliances and television sets whose circulars have asked, "Why wait 'til Friday?", is opening at 7 a.m.

Scheels, the sporting-goods retailer, will open its doors 7 a.m.

Lowe's, where November has morphed into "Black Friday Month," is opening at 6 a.m., the same as any other weekday, as are Menards and Home Depot, where Black Friday is "every day in November."

The bookseller Barnes & Noble at the Southern Hills Mall is opening at 8 a.m., an hour earlier than usual.

REMSEN, Iowa -- A plot of farmland in Plymouth County this week sold for what is believed to be a record-breaking sum of $26,250 per acre.

For nine years now, a group of volunteers has served Thanksgiving dinner at Salem Lutheran Church in rural Correctionville, offering a free holiday meal to anyone who's alone and has nowhere else to go to celebrate the holiday.

A sign that shows Michael's will be closed on Thanksgiving is displayed in the Lakeport Commons store's window.

Storefronts are shown Nov. 11 at Sioux City's Lakeport Commons shopping area. Many retailers are closing on Thanksgiving and Christmas.