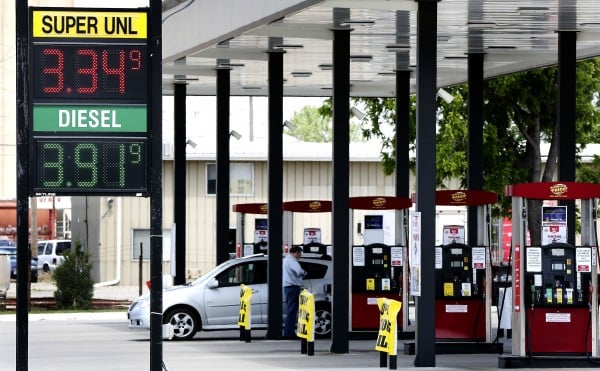 Customers refuel at the Casey's General Store on Lewis Boulevard in Sioux City in May. Gov. Terry Branstad on Tuesday said there may be legislative support to increase the state's fuel tax. 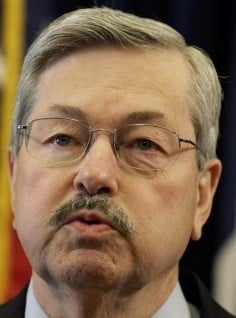 Branstad told about 65 people gathered at the Onawa Public Library that increasing the fee between 8 and 10 cents a gallon over three years could receive public support if it’s coupled with decreases in property and income taxes.

The gas fee, currently between 19 and 22.5 cents per gallon depending on the fuel type, has not changed since 1989.

Branstad last year urged lawmakers to suspend discussion of a tax increase for a year as the Iowa Department of Transportation worked to cut expenses and save money. He also raised concerns about a fee increase at a time of high fuel prices.

Branstad, a Republican, on Tuesday said IDOT ended up finding about $150 million in savings. If a gas tax increase happens, he said, more money could be directed to various projects, including widening U.S. Highway 20 to four lanes in western Iowa.

Monona County Engineer David Carney told Branstad that the county has had difficulty repairing 120 bridges and some road projects have been shelved due to funding issues.

Taxes are likely to become a major discussion point when lawmakers return to Des Moines in January. Republicans have proposed returning $390 million to taxpayers, and both GOP and Democratic officials have said they will seek property tax reform.

James Johnston, of Onawa, told Branstad it is difficult to witness gas price increases, which sometimes jump 10 to 15 cents in a day. But in spite of historically high prices, he said, a gas tax increase of about 7 cents is defensible.

"It is the people using the roads that pay the fee,” Johnston said.

Branstad and Lt. Gov. Kim Reynolds are holding town hall meetings in all 99 Iowa counties. The governor also spoke about the improved state budget condition and a summit planned Nov. 27 in Des Moines that will focus on curbing bullying in Iowa schools.

The summit was prompted by the April suicide of a South O'Brien High School teenager who was harassed after telling people he was gay and a documentary released last year that showed bullying in Sioux City schools.

Sioux City schools Superintendent Paul Gausman is scheduled to speak at the summit.

Dorothy Schlitter, of Onawa, told Branstad Tuesday that she thinks bullying is on the rise because prayer and other religious traditions have been removed from schools.

"You can have summits between now and kingdom come," Schlitter said, but any efforts won’t be effective unless schools return to traditional religious values that support families. She encouraged Branstad to do "whatever you can do to bring back respect for God."

Branstad said he supports all forms of education, including private religious schools. He noted that he spoke last week in Sioux City about the benefit of a state tax credit available to people who give donations to private school foundations, so children from low-income families can afford parochial school tuition.

Branstad: 'Next year's the year' for gas tax increase

DES MOINES | Raising the state gas tax should be part of broader tax reform that could actually decrease what Iowans pay in taxes and fees, Go…

Woodbury County may borrow to pay for road paving

Customers refuel at the Casey's General Store on Lewis Boulevard in Sioux City in May. Gov. Terry Branstad on Tuesday said there may be legislative support to increase the state's fuel tax.