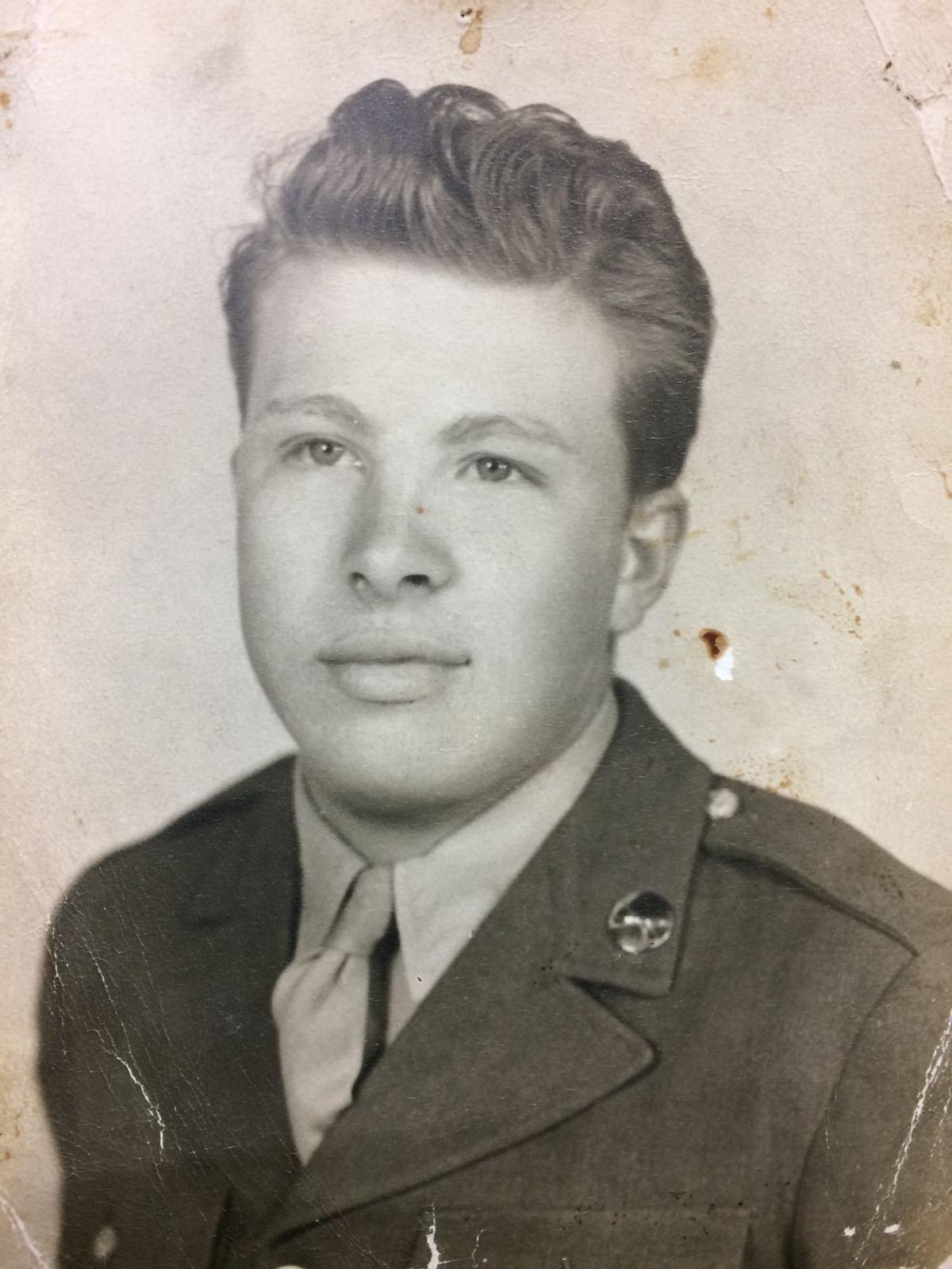 Daniel Harley Hansen served in the U.S. Army during World War II and the Korean War. He was captured in July 1950 and died while a prisoner of war in North Korea on Dec. 10, 1950. He was 26 years old. 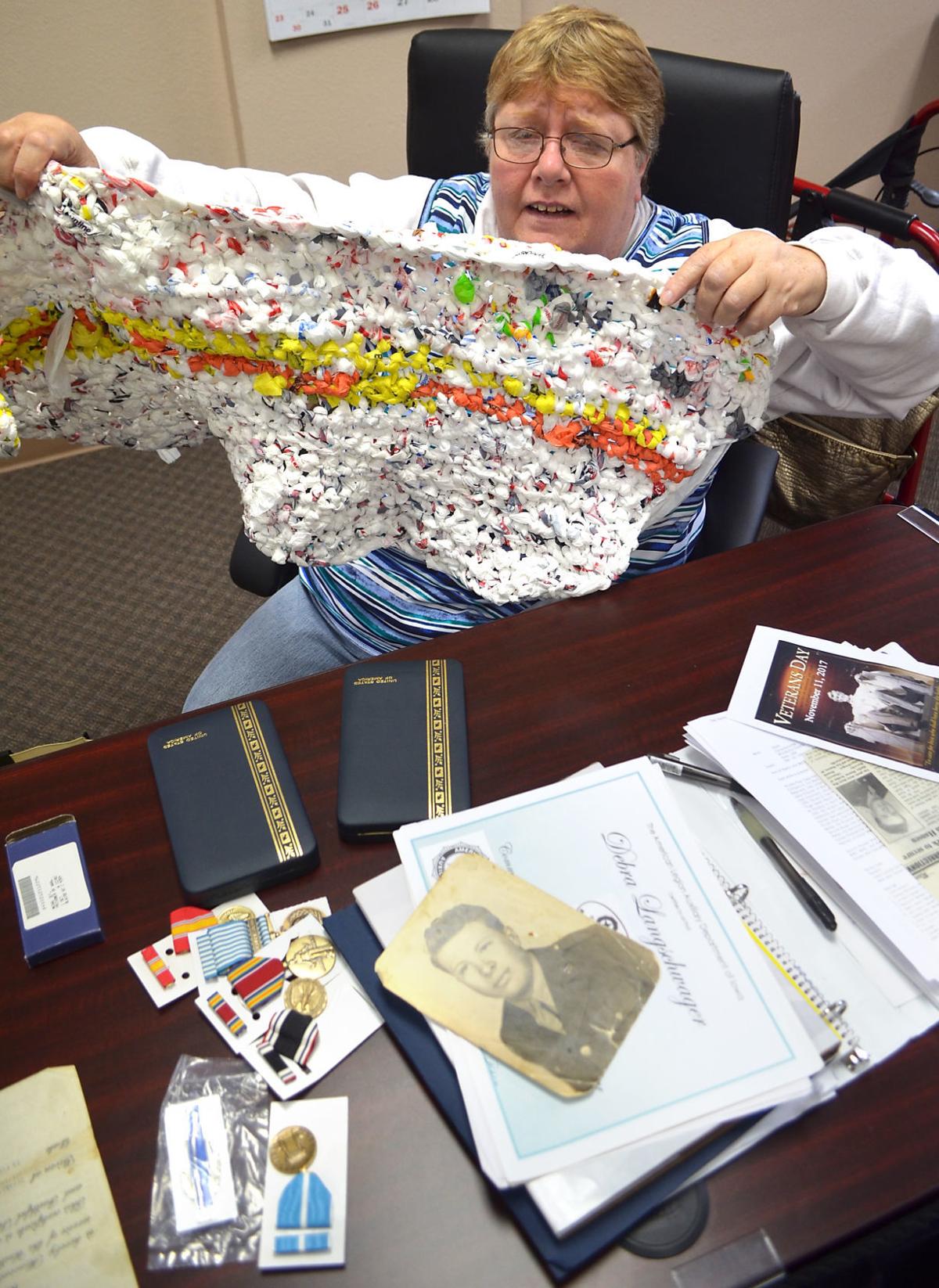 Debra Langschwager, Correctionville, Iowa, displays a mat she made by tying together plastic bags. Langschwager makes bags like this and donates them to entities such as the Gospel Mission in Sioux City in the hopes the mats can bring a measure of comfort to someone who is homeless. 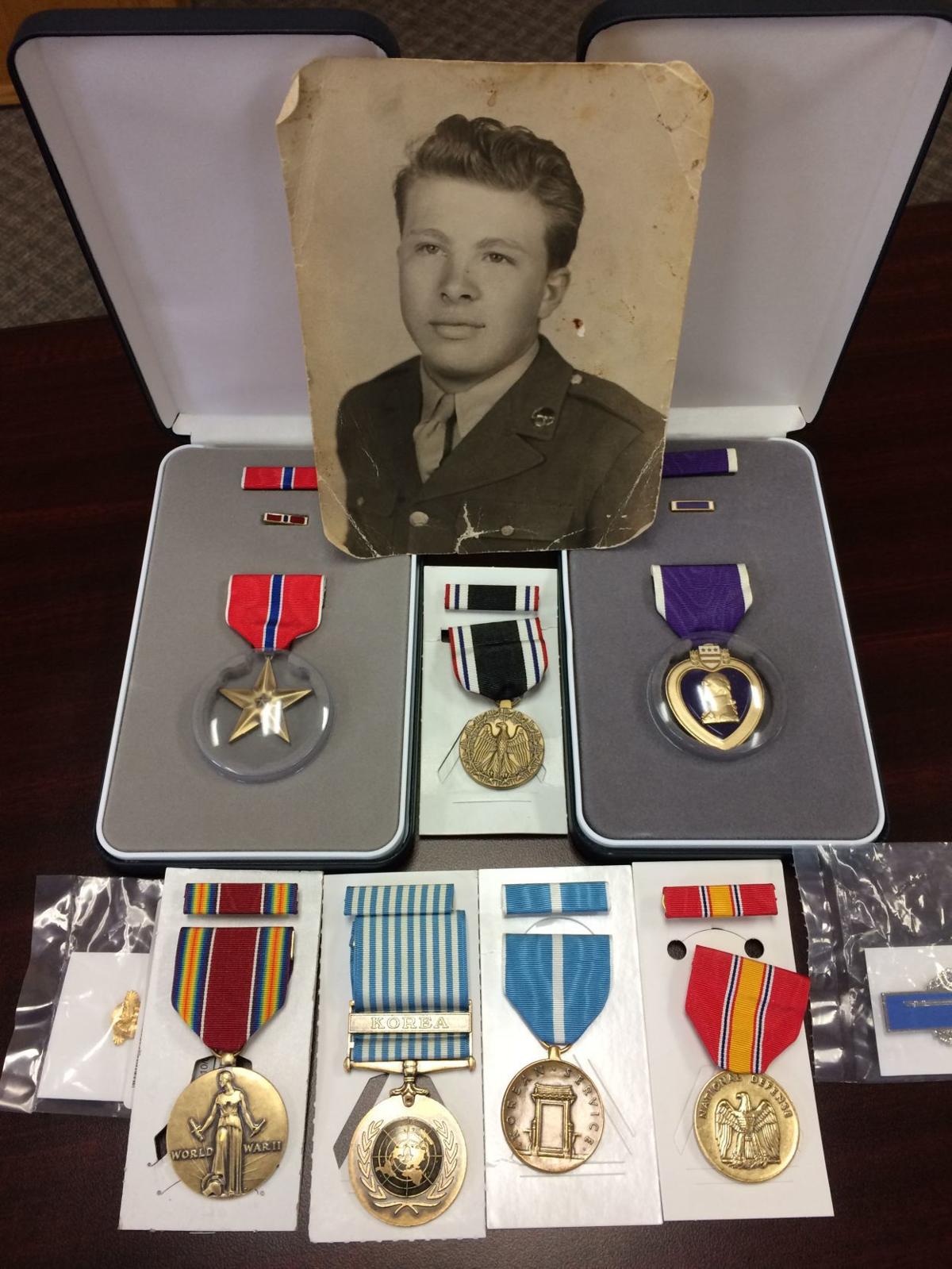 CORRECTIONVILLE, Iowa -- Debra Langschwager strings together plastic grocery bags, making mats for homeless veterans, one way she honors the memory of an uncle who died in the Korean War and never came home.

U.S. Army Private First Class Daniel Harley Hansen was taken prisoner of war while fighting the enemy near Chochiwon, South Korea, on July 11, 1950. He was forced to march to North Korea on the "Tiger Death March" and died on Dec. 10, 1950, in North Korea, 68 years ago Monday.

His remains were not recovered.

On Friday, officials with the Woodbury County Commission of Veterans Affairs made sure Langschwager received the medals Hansen earned so long ago. She examined the ribbons and medals, citations honoring him for service and his ultimate sacrifice, and wondered what could have -- or what did -- become of an uncle she never met?

"I remember him in prayer every day," she said. "There's a small part of me that wonders if he's still alive."

The U.S. Army says he isn't. But it can be confusing to a family member who has never been alerted about the final resting place of her uncle's remains. There was a lead a few years ago. Two of Langschwager's siblings submitted saliva from cheek swabs for DNA testing performed on the remains of another soldier who died in Korea. The Langschwager DNA didn't prove to be a match.

So the mystery, even in its slightest form, lives on.

"There were 10 of us in my family," Debra Langschager continued. "Our hope was always that one of us would somehow see Danny again. He'd be 94 now."

One of Danny Hansen's brothers, Donald Hansen, served in the military in Korea and attempted to learn what he could about his older brother's death. He came away with a Purple Heart presented posthumously to Danny, but that was it. Donald Hansen died in 2014.

Daniel Harley Hansen, son of Martin and Betty Hansen, of Correctionville, was born Nov. 9, 1924. Betty died earlier in 1950, a few of months before her son's capture. The Hansens had 14 children, five of them veterans. The family's first World War II veteran, John Henry "Jack" Hansen, was killed in a train vs. auto crash at Correctionville on July 4, 1946, months after his discharge. One account said the locomotive hit the car in which Hansen was riding and ended up pushing Hansen's body 550 feet before it came to rest 40 feet from the Hansen home on Correctionville's northwest edge.

"Jack" Hansen had just played baseball in the park at Correctionville and was being given a lift home when he was killed.

A headstone for Daniel Hansen was placed next to his parents' plot at Correctionville Cemetery, where his father was buried after his death in 1966. Daniel Hansen's grave remains empty, however, as his body wasn't recovered.

"My mother, Dorothy (Hansen) Langschwager, graduated from Correctionville High School in 1950," Debra said. "She never talked about this."

Debra and her sister, Betsy Clark, of Washta, Iowa, became interested in their family's history, interest that received a boost when Lisa Robinson, a clerk serving the Woodbury County Commission of Veterans Affairs, connected Daniel Hansen's name to his nieces more than a year ago.

"We had gotten certificates from the Iowa Veterans Museum for MIAs/POWs from the Korean War," Robinson said. "I had gotten an (on-line) ancestry account while we researched Civil War veterans in Woodbury County for a headstone project."

Robinson used her computer know-how to continue connecting families after wrapping up the Civil War project. She invited Debra Langschwager and Clark to attend a Veterans Day program at the Woodbury County Courthouse in 2017, whereupon a certificate was presented in their uncle's honor. Robinson then embarked on tracking down medals Daniel Hansen had earned.

"We weren't expecting these medals until February, it often takes a long time," Robinson said. "And then they showed up in December."

In addition to a Purple Heart and Silver Star, Robinson's office was able to obtain medals for the Korean War, World War II, United Nations, Prisoner of War and National Defense and get them to his niece.

"Maybe we'll make a shadow box and present it to the American Legion in Correctionville," Langschwager said on Friday. "I'll see what my sister wants to do."

She held the photo of the young Army soldier in her hands, examining his smile and the tattered, yellowing corners of the portrait. It may be one of the only photos that remains of Daniel Hansen.

Words written diagonally across the back of the photo show in pencil. Whoever wrote the description did so softly, in near-perfect flowing cursive. "Daniel Hansen," it reads, "died in Korea 1950...Lost in action."

CORRECTIONVILLE, Iowa -- Charlene Warren picks up a pair of Meals on Wheels boxes at City Hall in Correctionville on Thursday. She heads out f…

MOVILLE, Iowa -- Seven years ago John Susie stepped off a bull -- or was thrown off -- for what he believed would be the last time.

GALLAGHER: Family basks in the light of thanks

CORRECTIONVILLE, Iowa | I reach out to Dean Norris on Tuesday, attempting to track down his wife, Kim Norris, for a warm tale about Christmas …

LA JOLLA, Cal. -- A ceremony has been set for Saturday to honor a Navy pilot and Sioux City native who died in a 1959 plane crash in Californi…

Daniel Harley Hansen served in the U.S. Army during World War II and the Korean War. He was captured in July 1950 and died while a prisoner of war in North Korea on Dec. 10, 1950. He was 26 years old.

Debra Langschwager, Correctionville, Iowa, displays a mat she made by tying together plastic bags. Langschwager makes bags like this and donates them to entities such as the Gospel Mission in Sioux City in the hopes the mats can bring a measure of comfort to someone who is homeless.