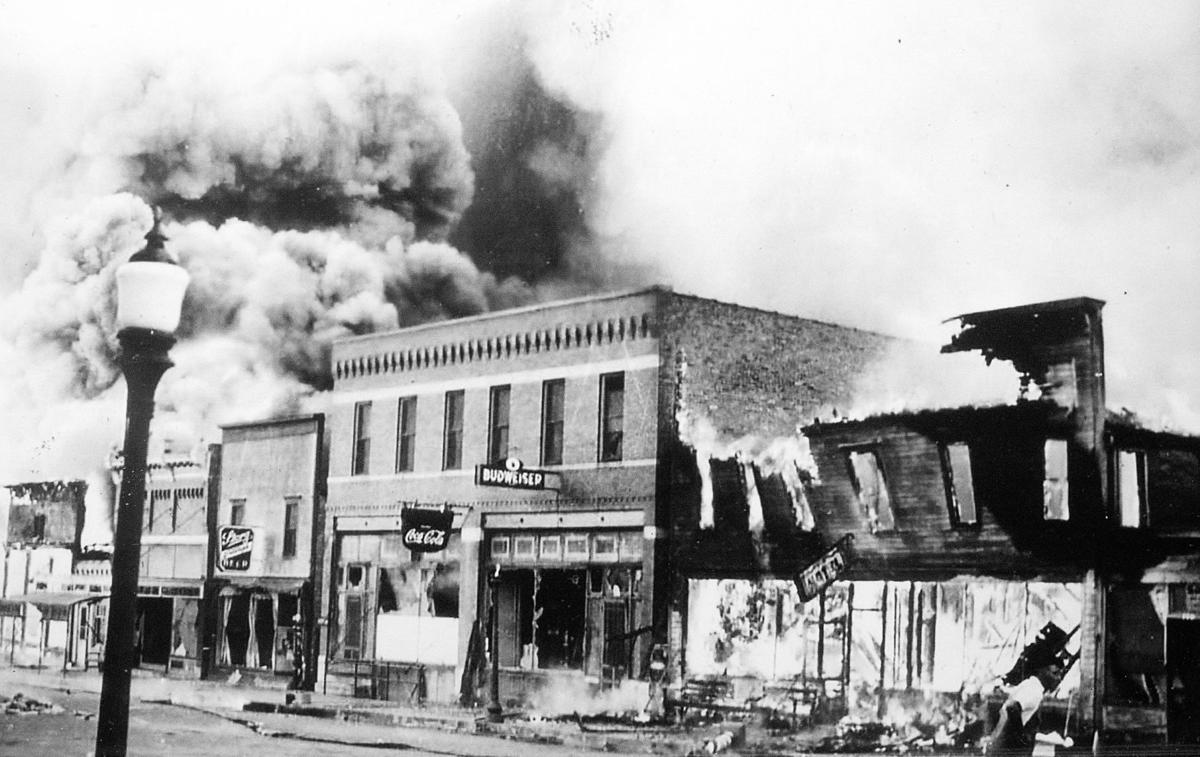 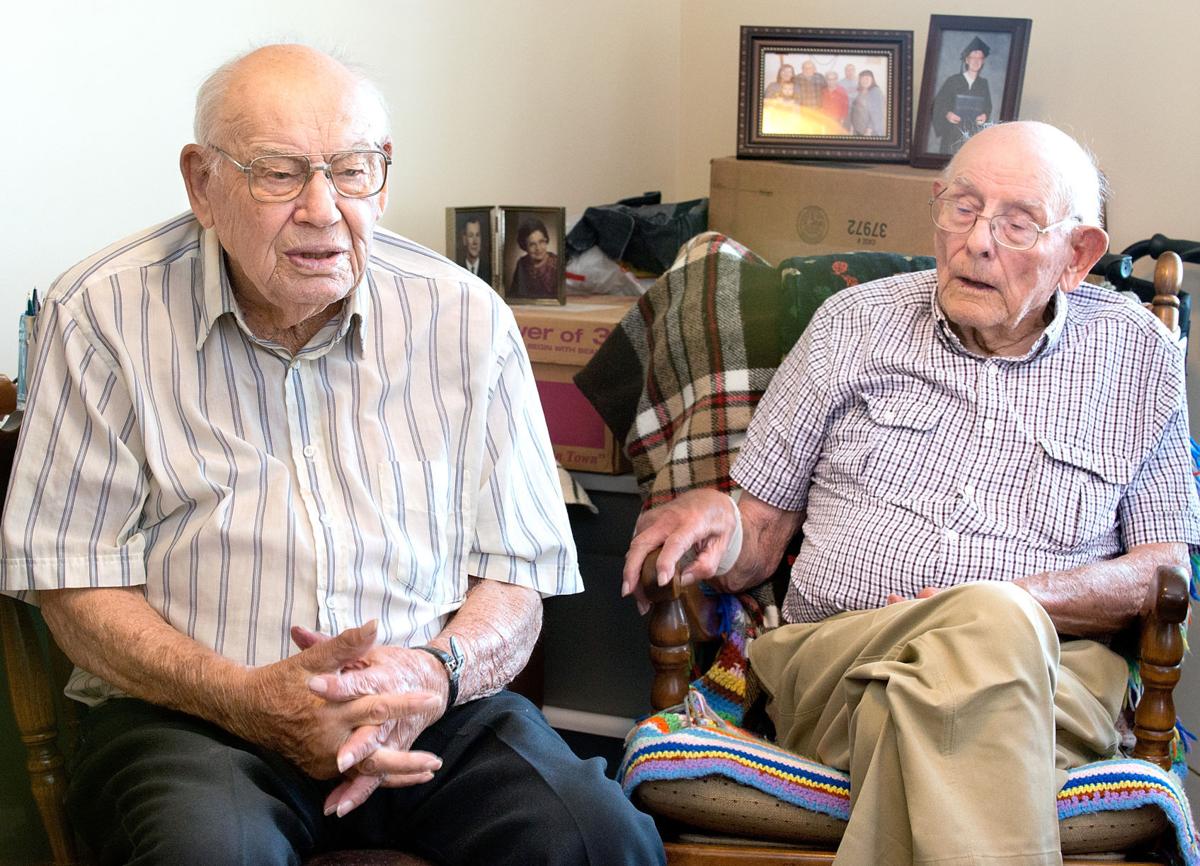 Silverius Schroeder, left, of Remsen and his brother Gilbert "Gib" Schroeder talk Friday about the fire on July 4, 1936, that wiped out part of the Plymouth County town and contributed to a ban on fireworks in Iowa. 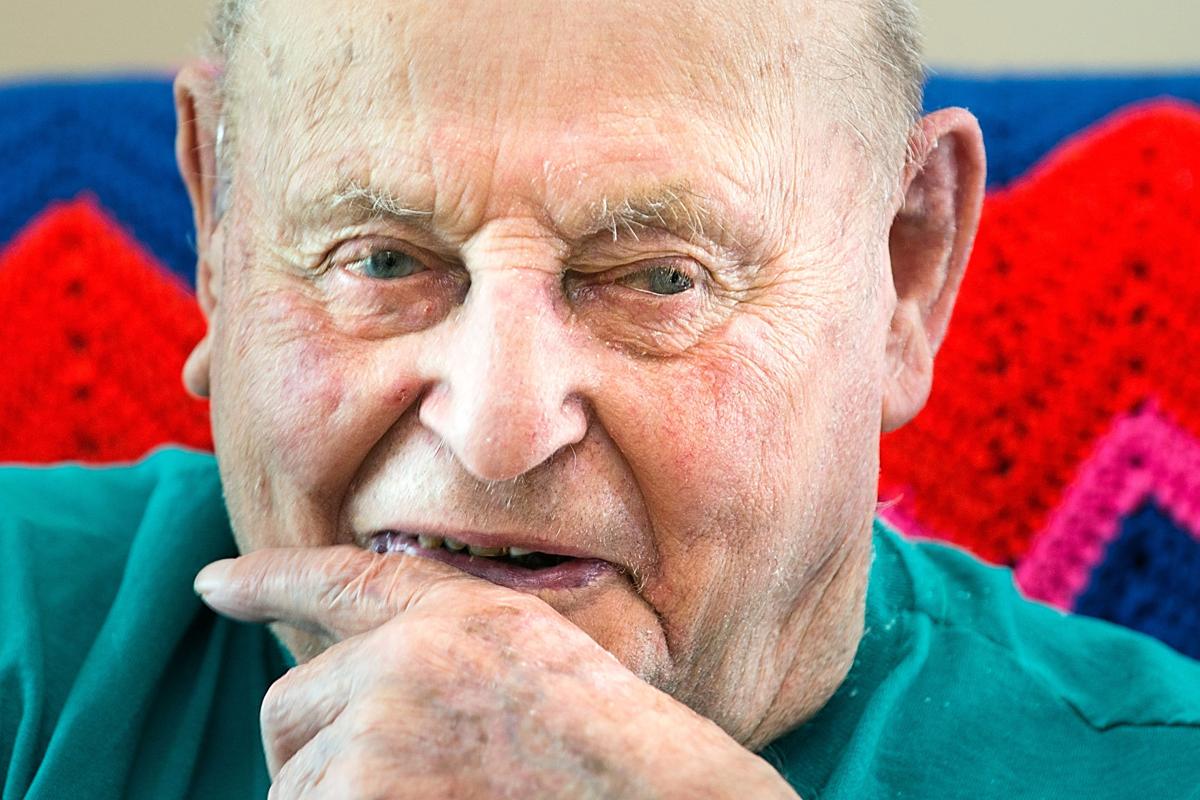 Irvin Schroeder of Remsen talks about witnessing the July 4, 1936, fire in downtown Remsen. 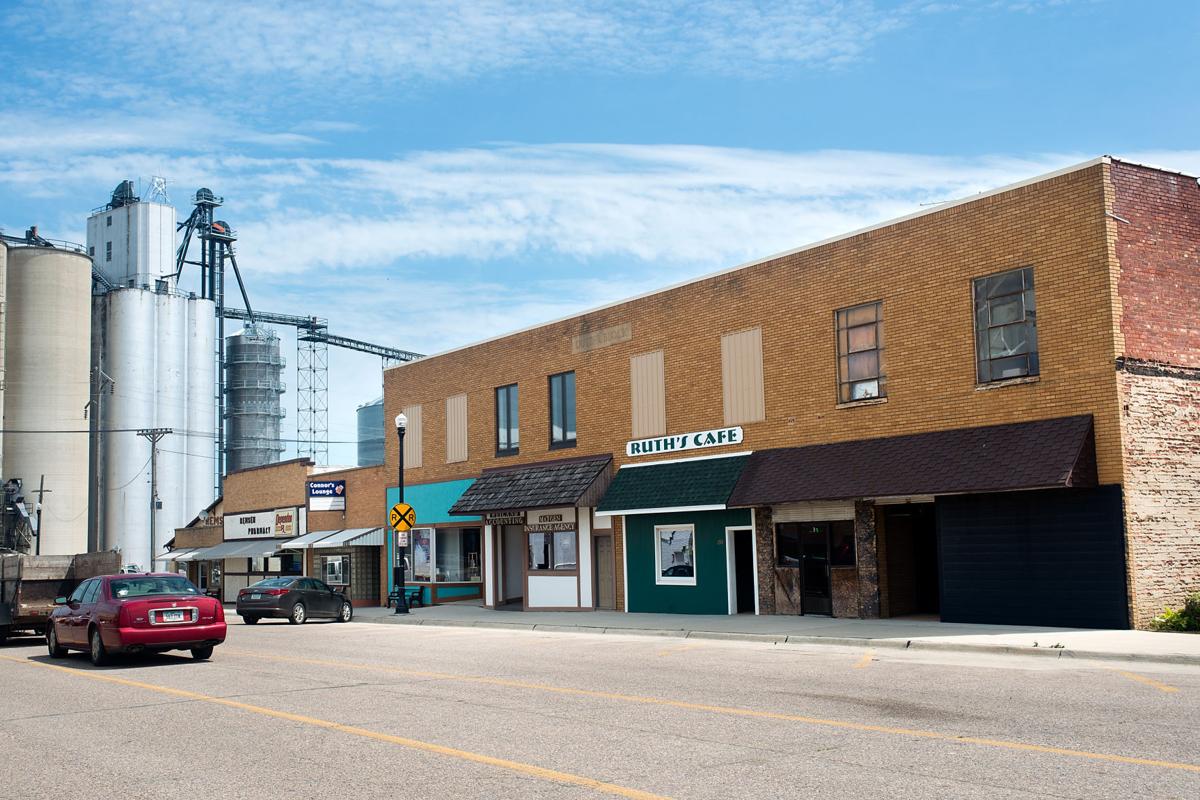 A part of downtown Remsen that was rebuilt after a fire in 1936 is seen in Remsen, Iowa, on Friday. The photo shows part of the east side of Washington Street.

REMSEN, Iowa | Eighty years after a chunk of Remsen went up in smoke and fire, the blaze continues to make news.

It did two months ago when an effort to legalize consumer fireworks crashed and burned in the Iowa Legislature. Fireworks, for the most part, have been illegal in Iowa since 1938, snuffed out after being traced to five-alarm fires on June 27, 1931, in Spencer, and July 4, 1936, in Remsen.

The tragedy in Spencer began when a boy dropped a sparkler into a retail display of fireworks. It took mere minutes for 25 businesses to go up in smoke. Fifty other businesses were damaged in a 2 1/2-block area downtown.

Five years later, a similar scene repeated in Remsen. I drove there on Friday to meet with the Schroeder brothers, three guys who know something about their infamous July 4 fire. They were there, watching helplessly as 15 homes and 18 structures housing up to 38 businesses crumbled in a blaze described as a "holocaust" by local reporters.

I'd read that a young girl told a waitress at Dunn's that a firecracker exploded in her tent behind the restaurant on Washington Street in downtown Remsen. The tent fire, fanned by winds from the south, spread to the Bellmeyer and Hodgen garage, and from there two blocks north to the lumberyard, the grain elevators, baseball field, residential neighborhood and more.

"I've heard it didn't start with a firecracker," said Gilbert "Gib" Schroeder, 89. "I think fireworks became the story because it happened on July 4."

At the same time, a fire that began in a grass plot at Oyens, destroyed nearly half the structures in that small Plymouth County community.

July 4, 1936, the Schroeders said, was "beastly hot," memories verified by National Weather Service statistics that show July 1936 to be the warmest month on record in Sioux City, with an average temperature of 87.1 degrees.

Sioux City's all-time high temperature of 111 degrees has been reached three times. The first occurred on July 4, 1936. The second was 13 days later.

"We didn't have a corn crop," said Irvin Schroeder, 92, who was raised with his brothers and their sister, Celeste, who is 96, on the family farm seven miles south of Remsen.

The whole family piled into their 1936 Chevy driven by their father, Joe Schroeder late that holiday afternoon, a Saturday, to see the conflagration. Their mother, Clara, learned the news after seeing the plume of smoke rising in the north.

"Our mother called the central (phone) line and was told that the whole town of Remsen was on fire," Gib Schroeder said.

Another report stated a group of boys played with firecrackers in a tent made of gunnysacks at the back of the Pantry Lunch, which adjoined the Bellmeyer and Hodgen garage. A firecracker sparked, igniting the tent as it brushed against the garage, spreading flames in an instant.

"I heard it started with a bunch of oily rags there in the alley," said Sylverius Schroeder, 94.

The blaze spread rapidly, reducing adjacent business sites built largely of wood to piles of ash. Wind gusts and the oppressive heat hampered fire-fighting efforts, as did the holiday and its tradition for baseball.

"Many of the Remsen's volunteer firemen were out of town at the time of the fire, playing a holiday baseball game elsewhere, said Karen Harnack, secretary for the Remsen Heritage Museum.

Volunteers did what they could to protect Remsen's residents as 150 members of the National Guard raced to Remsen, joined by fire-fighting units from nearby Le Mars, Alton, Merrill, Marcus, Kingsley and Sioux City.

"You had rail cars at the depot whose wheels melted in the fire," Sylverius Schroeder said.

A break in the fight came when firemen used ropes to pull the Ideal Hat Shop, a frame building, away from the concrete wall of the adjacent building, the Kohler jewelry store.

Immediate estimates put the losses in Remsen at well over $600,000.

The Remsen City Council called a special meeting two days later. Among the items passed? An ordinance prohibiting the sale and shooting of fireworks.

The Iowa Legislature followed suit in 1938, becoming the first state to enact a statewide ban on the sale of fireworks.

Tony Duster, who lost a hotel, tavern and pool hall in the blaze, losses estimated at $60,000, said he'd rebuild, joining the ranks of others who did the same. The name atop a brick structure that now contains four businesses on the east side of Washington Street bears it out. "Duster Block," it reads.

"It took years to rebuild," said Gib Schroeder, who left Remsen to fight in the Korean War, following the path brother Irvin blazed with his service in World War II.

All three men farmed near Remsen during their working careers, and have watched the community expand with housing and commercial developments to the east and west.

The area destroyed by fire on the Fourth of July some eight decades ago now features a variety of businesses and residences, ranging from the Beer City bar to Remsen Pharmacy to Ruth's Cafe to Remsen Lumber Co. to Remsen Farmers Co-op and more.

And while there wasn't a death, nor any serious injuries recorded on the day of the inferno, one Remsen resident died six days later. The death of John Filburn, 88, was blamed largely on the shock he suffered in losing his residence inside the Hoffman Hotel. Filburn, it was said, attempted to enter the hotel repeatedly as it burned on July 4, 1936.

Apparently, he had reasons. Filburn had come to Remsen from Chicago, where, as a 23-year-old in 1871, he escaped the nation's most famous fire, the "Great Chicago Fire," which killed around 300 people and left 100,000 homeless.

Filburn was separated from his family in the wake of the fire and never learned what became of them. He died in Remsen surrounded by friends, unaware if he had any living relatives.

Editor's note: The Iowa Legislature adjourned for 2016 on April 29. Today, in the final Inside the Capitol for this year, local lawmakers offe…

CRAIG, Iowa | Blinded by a torrential downpour, Rick Westhoff joined a caravan of motorists on Friday night, pulling onto the shoulder of Iowa…

LE MARS, Iowa | Herb and Jean Angell left Lincoln, Nebraska, on Monday morning, and headed for Minneapolis. The fastest route, according to Go…

SIOUX CITY | Fireworks are as American as baseball and apple pie. Which is why many fireworks stands in southeast South Dakota rake in a great…

BRONSON, Iowa | Dave Amick isn't positive when he talks about the history of the July 4 fireworks show at Bronson. He believes that Monday's e…

CORRECTIONVILLE, Iowa | Gabe Navarro leaned back in his lawn chair near the Little Sioux Park beach Monday afternoon as his younger siblings a…

Kaboom! Repeal of Iowa ban on fireworks on way to Branstad

DES MOINES — When Rep. Matt Windschitl thinks about the Fourth of July, he thinks about “fun, freedom and fireworks.”

REMSEN, Iowa — For some in the small, northwest Iowa towns of Spencer and Remsen, the fire still burns.

Silverius Schroeder, left, of Remsen and his brother Gilbert "Gib" Schroeder talk Friday about the fire on July 4, 1936, that wiped out part of the Plymouth County town and contributed to a ban on fireworks in Iowa.

Irvin Schroeder of Remsen talks about witnessing the July 4, 1936, fire in downtown Remsen.

A part of downtown Remsen that was rebuilt after a fire in 1936 is seen in Remsen, Iowa, on Friday. The photo shows part of the east side of Washington Street.