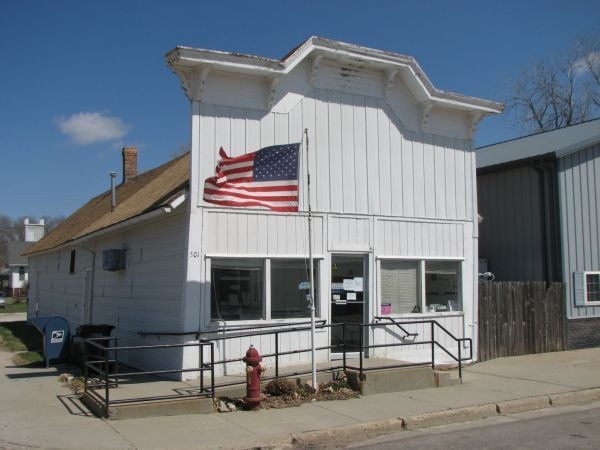 The former U.S. Post Office in Blencoe, Iowa, is shown in April 2014, shortly after the post office closed due to structural problems with the building. The post office reopened Wednesday in a building on the Monona County town's main street, across from street from the former post office. 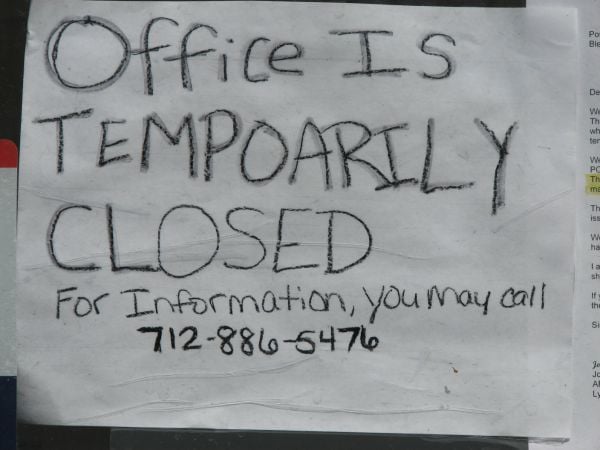 The sign on the door of the U.S. Post Office at Blencoe, Iowa, informed patrons of the office's closing in April.

BLENCOE, Iowa | Losing $354 million in a fiscal quarter may lead one to cut corners to stop the bleeding.

That's my thought as I stand outside the U.S. Post Office at Blencoe. I read a sign scribbled in marker, maybe crayon. I've seen more legible efforts on placards advertising "Free Kittens."

The post office at Blencoe closed April 8. The announcement came in the form of this hastily created sign, a letter that day from the USPS, and an impromptu announcement at the Blencoe Community Center's morning coffee klatch.

"The clerk stopped at coffee and told us the Post Office was closing," says Mary Keele, a resident of Blencoe and U.S. Postal Service retiree. "It was kind of sudden. Inspectors get action."

Inspectors, Keele says, deemed the post office site, at 501 Main St., unsafe. The closing is temporary until the building owner completes structural repairs. The owner, according to the Monona County Assessor's Office, is Nationwide Real Estate of Chicago, Ill.

The U.S. Postal Service hasn't said when repairs will be made, or if there's a deadline for those repairs. I called the number on the sign, which took me to someone named Kelly at the Moorhead (Iowa) Post Office. She handed the phone to a clerk named Dana, who referred me to a supervisor named Jolene at the Lyons (Neb.) Post Office.

I called the Lyons Post Office, and learned Jolene worked that day in Fort Calhoun, Neb. I reached her in Fort Calhoun, but she couldn't answer my questions. Jolene said another supervisor, Wes, would ultimately determine who could speak to me. And that person would give me a call.

In the time it takes the U.S. Postal Service to get back to me, I think locals at Blencoe could build a new post office. This is the town, after all, that built its own earthen wall to protect the community of 240 residents from threatening floodwaters in June 2011.

I was there when they built the famous "Blencoe Berm," a five-mile salute to civic speed and volunteerism. I remember one local, hip-deep in dirt, exclaiming that day, "We can't wait around for the government!"

As you might imagine, Collison doesn't have a ton of free time. So, it didn't set well when he was advised to join other Blencoe patrons in picking up the daily mail at the Moorhead Post Office.

Moorhead is 16 miles east of Blencoe, meaning it's at least a 32-mile round-trip drive through the Loess Hills. Collison, like most, would rather retrieve his mail in Onawa, seven miles from Blencoe.

The choice: Drive 16 meandering miles through the hills? Or, drive a straight shot north on Interstate 29 to Onawa, the county seat where most Blencoe residents buy groceries, do their business, and send their kids to school? Doesn't seem like the Postal Service made the most efficient call on this.

According to Keele, Blencoe's mail goes to Moorhead because those communities are in the same district, one covered by the 515 ZIP code.

"I'm lucky to get my mail once per week," said Collison, who is busy planting corn and fighting grass fires. "This has been a royal pain in the butt."

Some patrons were allowed to erect temporary mailboxes on the street, as long as the rural mail carrier passes in front of their home. Keele has her mail delivered to a friend's home just outside of town, on a rural route. Others nominate one person to drive to Moorhead to pick up the mail each day for several patrons.

"I'm the mayor, the police officer for our town, the town medic and the assistant fire chief," Collison said. "I get a lot of mail. This really inconvenienced me what they did, shut it down overnight and take the post office and walk away with it. Don't they want my business?"

For a small town, Mayor Collison is a big customer. A dissatisfied customer for an enterprise that lost $354 million in the last reported fiscal quarter.

The mayor said he never got a call about his town's post office, before or during the crisis.

That makes two of us.

The U.S. Postal Service will hold a community meeting at 7 p.m. Aug. 20 in the Blencoe Community Center to discuss a proposal to relocate the town's post office, which closed in April because of structural problems with the building's foundation.

GALLAGHER: Washed away? Not Blencoe

They should be dancing in the streets at Blencoe, a low-level burg that many predicted nine weeks ago would be destroyed, sunk under Missouri River floodwaters.

BLENCOE, Iowa -- Michael and Amy Hall applied for a construction permit this month to do something nobody else is doing in Blencoe.

BLENCOE, Iowa -- Call it the flood before the great flood.

The former U.S. Post Office in Blencoe, Iowa, is shown in April 2014, shortly after the post office closed due to structural problems with the building. The post office reopened Wednesday in a building on the Monona County town's main street, across from street from the former post office.

The sign on the door of the U.S. Post Office at Blencoe, Iowa, informed patrons of the office's closing in April.