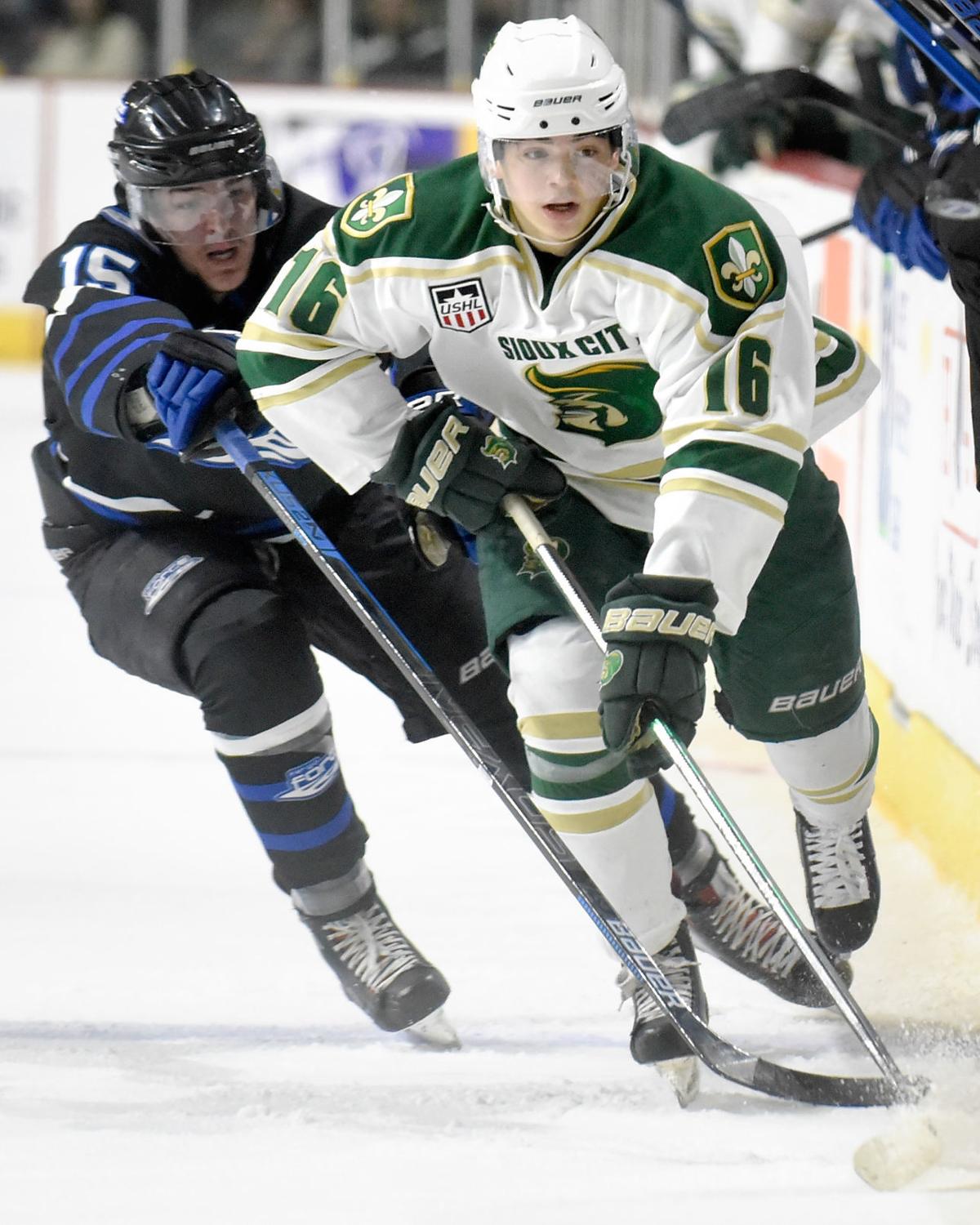 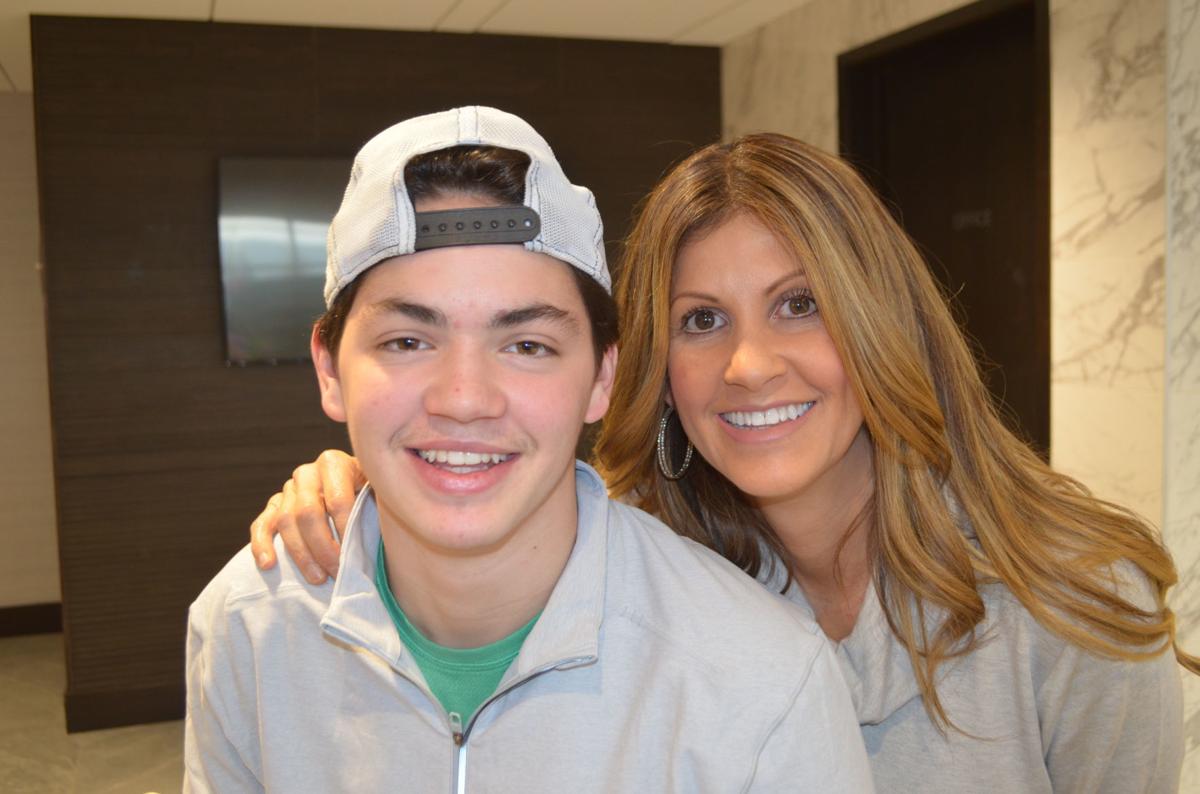 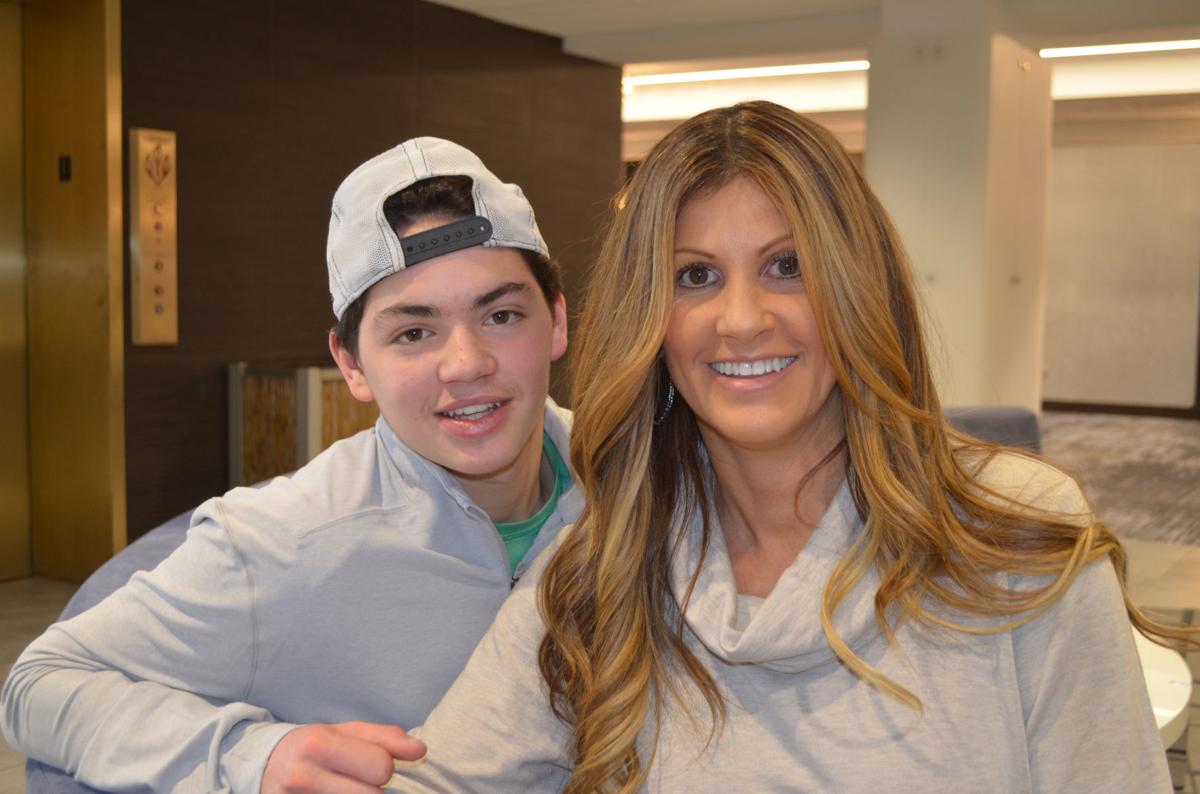 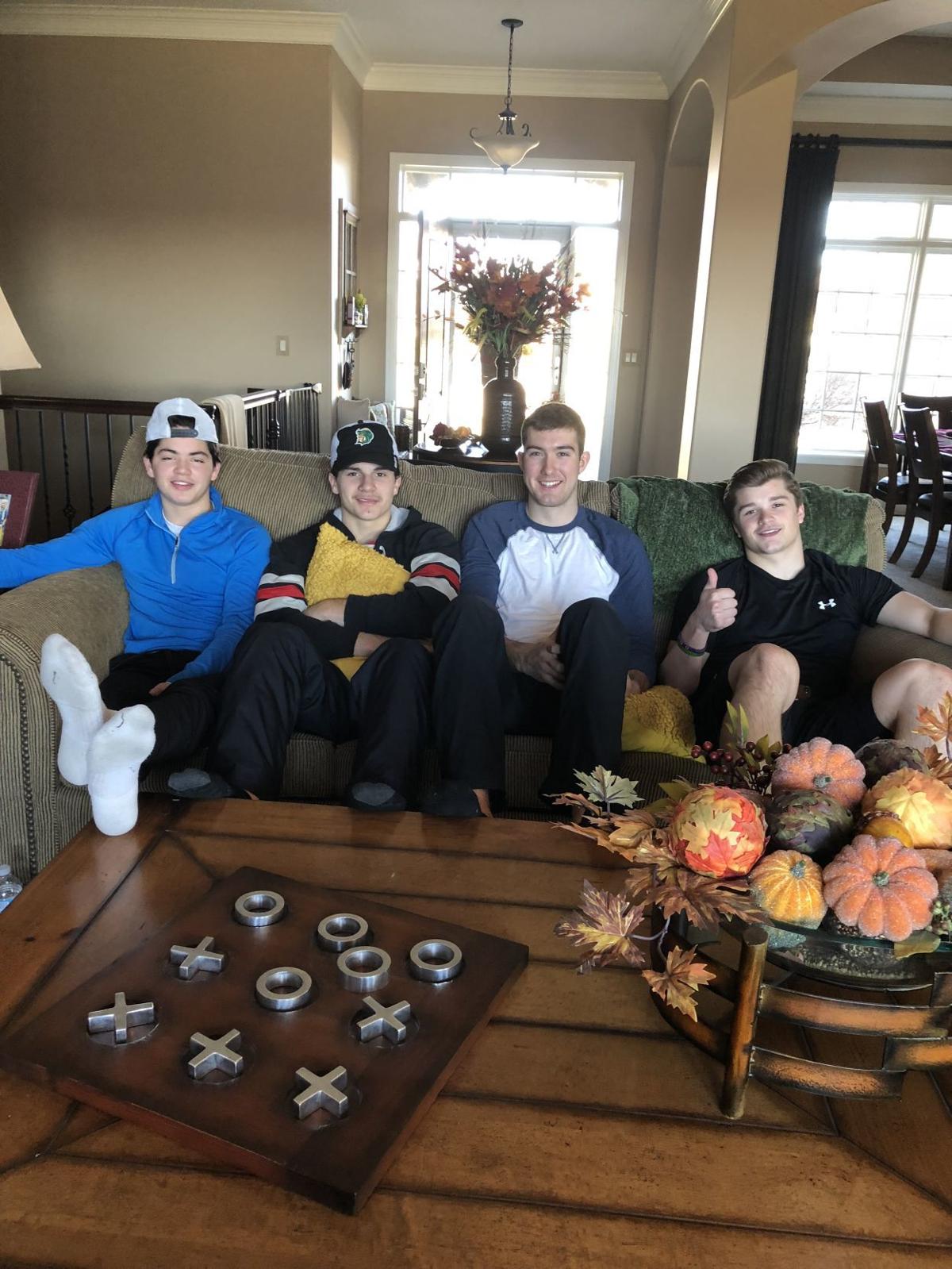 SIOUX CITY -- Sioux City Musketeer Brock Baker spent his first Thanksgiving away from home on Thursday. Rather than spending the holiday alone, he feasted with family and friends, part of a group of 20 devouring turkey and trimmings in the home of Mike and Claudia Ratkiewicz, a Sioux City couple who has hosted Musketeers for 15 years.

"Our children were at their in-laws, so we hosted Thanksgiving for our four players, their families and some of our neighbors," Claudia said. "Even though some families traveled, they brought casseroles and snacks. We did two 10-pound turkeys and ham."

Baker's mother and stepfather, Trisha and Troy Jeske, and Baker's younger sister, Halli Baker, left home in Verona, Wisconsin, early Thursday and arrived in time for the holiday meal, yet another bonus the family has earned in years of following their hockey squads. Trisha Jeske said it's the first time in her life she hadn't rung in the holiday at home, as the family Thanksgiving tradition always unfolded in the home of her parents, John and Luainne Fleming of Madison, Wisconsin, parents of seven children themselves.

"For the first time in my life, my parents weren't hosting Thanksgiving this year," Jeske said. "The minute Mike and Claudia found out we were coming, they invited us celebrate Thanksgiving in their home. The food was wonderful!"

"They are great kids," said Claudia, who noted the couple hosted friends on Thursday from their neighborhood as well as Musketeer families from Indiana, Minnesota and Wisconsin.

Brock Baker said it was nice to have the holiday on the heels of Wednesday evening's 4-2 victory over Waterloo, the team's sixth straight triumph. It worked even better, Baker said, to be surrounded by his hockey family and his immediate family. After the big day, Baker spent time focusing on Fargo, the Friday night foe. A game at Des Moines followed on Saturday.

"The schedule was ideal for my family to be here," he said.

Trisha Jeske has lovingly juggled hockey schedules for years. Her oldest son, Brogan Baker, 22, a senior at the University of Wisconsin-Eau Claire, played hockey from an early age, as did son Tarek Baker, 21, and now Brock.

The sons' father, Stephen Baker, now of Portland, Oregon, was a big supporter of their boys as they got involved in AAA hockey, an activity that has only grown in the ensuing years as they traverse the Upper Midwest and more.

Tarek Baker, in fact, currently plays for the Wisconsin Badgers. Sioux City fans may remember the name, as Tarek Baker was traded to Sioux City during the 2017 season and figured on the ice as the Musketeers reached the Clark Cup Finals, falling to Chicago.

When asked to name the geographic area in which she's watched the boys play hockey, Trisha Jeske paused and stated that she's seen one or more sons play in Canada and in every United States Hockey League stadium save for those in Muskegon, Michigan, and Youngstown, Ohio.

"I figured that one year I spent $22,000 on all three playing triple-A hockey and all the camps," she said. "And I wasn't making a lot of money at the time."

Hockey, though, has remained an integral part of the family's makeup, dating back to when one of her brothers, Rick Fleming, helped the University of Wisconsin-Stevens Point win its first national title nearly three decades ago. Rick's daughter, Brittyn Fleming, now skates for the Mavericks of Minnesota State University at Mankato.

Brock Baker, 18, is finishing high school through on-line course as he resides in Sioux City this season. He'll study business and play hockey at St. Cloud State in St. Cloud, Minnesota, next year. His family, he reasoned, would likely be there as much as possible, following him across the country, if they're able.

"If we can't be there, we watch the games on-line," Trisha said. "We try to be there as much as possible because we enjoy our boys, their teammates and everyone associated with this sport. Hockey is very much a connected group and there are so many great people and coaches working to make sure these boys succeed both on and off the ice."

People like Mike and Claudia Ratkiewicz and the important role they play won't ever be forgotten, Trisha said. Their commitment and warmth comes through on a daily basis, not just during a holiday feast.

"I am so thankful for billet families as our boys need to eat well, sleep well and be in a good environment," she concluded. "They are truly second parents who you entrust with your children to care for them and keep them safe."

What a great message to hear, on a holiday weekend that seems to center on being together and being thankful.

John Hinckley to be released from oversight

Plant-based chIcken nuggets come to the US market

Plant-based chIcken nuggets come to the US market

SIOUX CITY -- When Parker Ford craves sushi, he craves Crave, the sushi restaurant with a view of the Veterans Bridge in Sioux City.

CEDAR FALLS, Iowa -- The West Sioux Falcons won long before their championship football game kicked-off on Friday at the UNI-Dome in Cedar Falls.

GALLAGHER: Audio executive amplifies his gratitude for mentor in Akron

AKRON, Iowa -- To hear what gratitude sounds like, lean in as Ben Stowe holds his laptop and presses "Play." A voice streams through from Time… 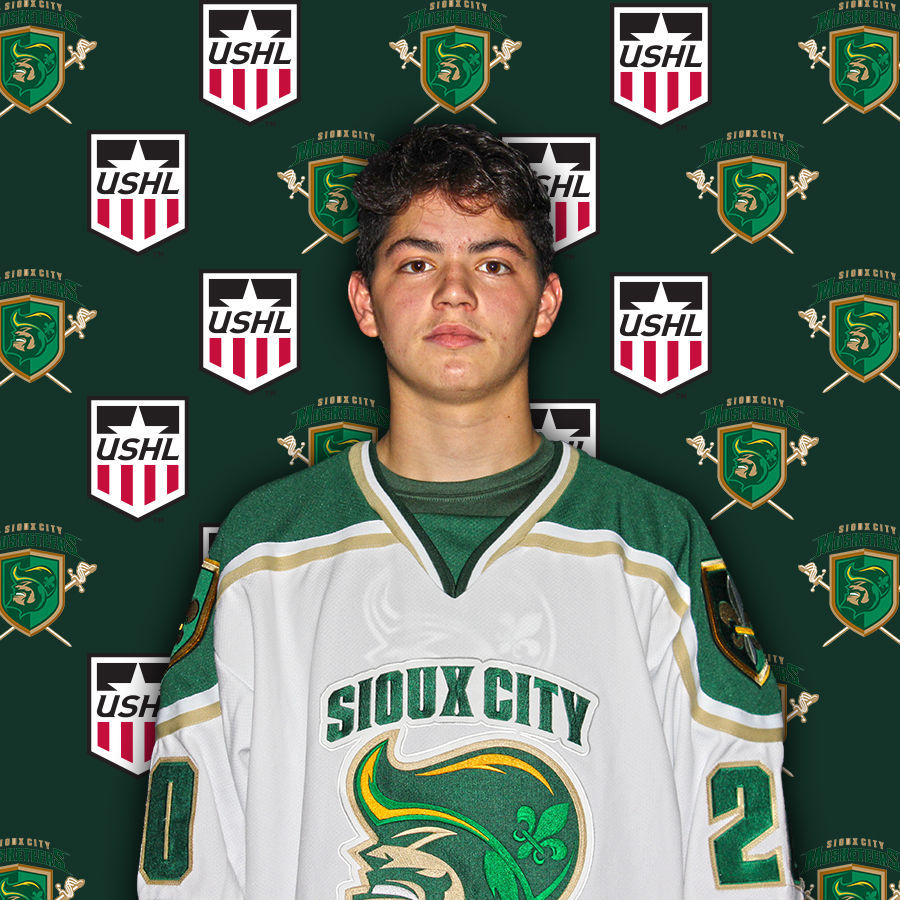