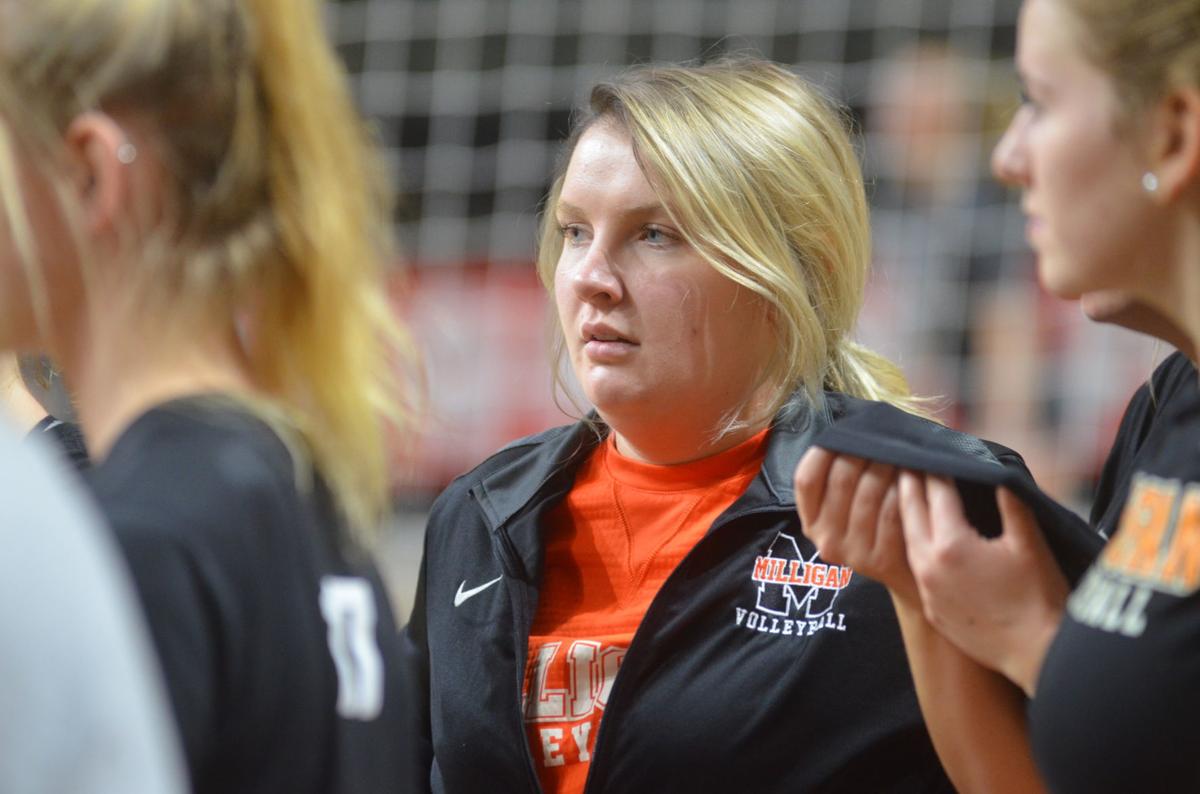 Caroline Little, a junior at Milligan College in Tennessee, stands with her teammates at practice on Monday at the Tyson Events Center in advance of the 2018 NAIA Women's Volleyball Championship. Little suffered a season- and career-ending elbow injury in August. 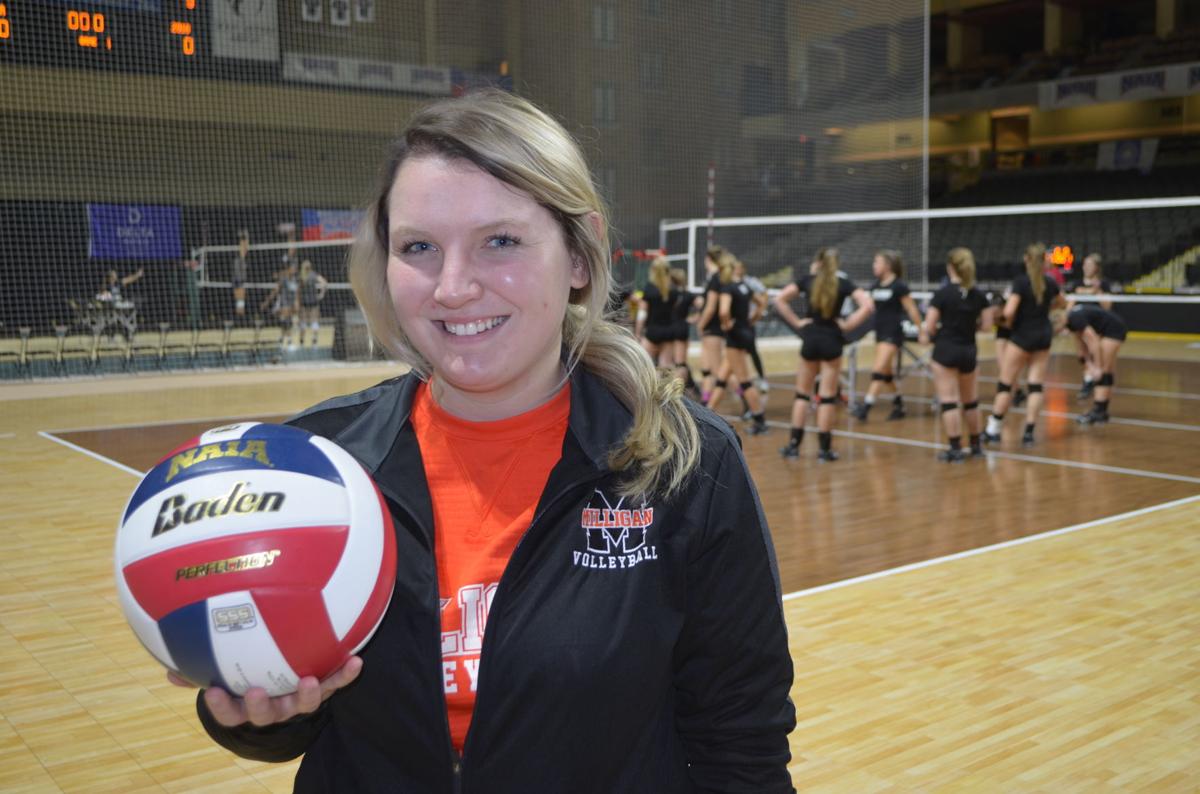 Caroline Little, a junior at Milligan College in Tennessee, stands near the court as her teammates practice on Monday at the Tyson Events Center in advance of the 2018 NAIA Women's Volleyball Championship. Little suffered a season- and career-ending elbow injury in August.

SIOUX CITY -- Visible among three scars on Caroline Little's left arm is the name of her mother and her mother's phone number.

"Our bus rides can get pretty wild," Little said with a laugh as her teammates, the Buffaloes of Milligan College, began a volleyball workout at the Tyson Events Center in advance of the first national tournament for the school's volleyball program in 22 years. The Buffaloes face No. 1 Grand View University of Des Moines at 3 p.m. Tuesday to begin their national tourney.

A bus ride Sunday that was supposed to take five hours stretched into a 12-hour odyssey as the charter carrying Little and her teammates encountered a blizzard that forced much of Missouri and southern Iowa to a standstill.

"At one point we went 12.5 miles in four hours," Coach Doneva Bays said. "I kept wiping the windshield so our driver could see. We also sat on the side of the road for two and a half hours."

Four of the 32 teams hadn't yet reached Sioux City by mid-morning on Monday, though Corey Westra, the tournament commissioner, expected all to arrive by the afternoon, delayed by a storm that dumped up to 17 inches of snow on parts of southern Iowa.

The charter carrying the Milligan team crept into St. Joseph, Missouri, on Sunday evening as Bays looked for a restaurant to host her team. With the storm dumping snow in veritable waves, not much was open. At one point, the bus driver had to back the bus down a street as the unit couldn't make the hill.

"I looked out the window and thought I'd wind up in a shed off the side of the street," Little said.

The driver ultimately delivered the team to Perkins Restaurant for supper, a meal the manager cooked because the cook couldn't get to the restaurant. The Buffaloes reached Sioux City around 12:30 a.m. Monday.

"God is teaching us something about patience," said Bays, who played for Milligan College 22 years ago when the Buffaloes last appeared in the national tournament. "We've made memories already."

One of Caroline Little's national tournament memories is scribbled across her left arm. When asked if fear prompted her to write her mother's name and number in marker on her arm, she bust out laughing. Sitting along the side of the interstate in a blizzard causes you to do some odd things, either out of panic or boredom.

"We're just happy we got here," she said.

Milligan College earned a tournament berth by upsetting Cornerstone University at Grand Rapids, Michigan, in the opening round. The Buffaloes have won 17 of 19 matches entering the tournament. Little has been on the bench for each of those triumphs, lending her eyes and her voice in support of her teammates.

Her left arm, you see, doesn't work on the volleyball court any more, the result of an injury sustained in August as Little attempted a comeback after Tommy John surgery. Little first injured that arm on Sept. 4, 2017, when she collided with a teammate and dislocated her left elbow while tearing her ulnar collateral ligament.

"I put my elbow back in place and kept playing for the rest of the season," she said.

Tommy John surgery followed that season as doctors at the Knoxville (Tennessee) Orthopedic Clinic took a tendon from her left wrist and placed it in her left elbow, a surgical procedure often done on baseball pitchers. Doctors told Little she was the first volleyball player upon whom they'd performed the surgery.

The right-hander worked to rehab her left arm and gained medical clearance to play during August. The second injury took place early in pre-season camp, the result of a block that inflicted pain through an arm that was already numb.

"I heard something snap," she said. "Doctors have told me they'll have to go in again and clean out the scar tissue around the nerve."

Rather than fade from the program, Little kept coming to practice. She'd offer insight when asked and tried to keep her teammates zoned in on a national tournament berth.

"I go to lifting sessions, workouts and practices because these are my friends," said Little, a junior who will graduate one year early then commence full-time on earning a master's degree in occupational therapy.

Two of her three classmates involved in volleyball -- Julie Dockery and Kellee Geren -- will also graduate early. Those teammates, plus another Milligan junior, Alyssa Gibson, will take part in Little's wedding, as she and fiancee Isaac Barkley, a Milligan baseball player, plan to exchange vows on June 29.

There was no chance she'd miss the national tournament, even though sitting on the bench elicits a range of emotions, from utter joy to deep disappointment.

"I had lot of tears when we beat Cornerstone to earn a trip here for the national tournament," she said. "This had been hard. I've had to learn a new role. But, this has taught me more about myself and more about life. This is all part of a greater plan."

While the road here -- both the direct blizzard-marred route north and the one that's been her journey -- was filled with starts and stops and blind spots, Caroline Little and the teammates she loves ultimately celebrated reaching Sioux City, their destination.

SIOUX CITY | Great Plains Athletic Conference colleges Morningside, Dordt and Northwestern had known about having already qualified for the NA…

SIOUX CITY -- The Great Plains Athletic Conference will once again be well represented at the NAIA Volleyball National Championship. The confe…

Caroline Little, a junior at Milligan College in Tennessee, stands with her teammates at practice on Monday at the Tyson Events Center in advance of the 2018 NAIA Women's Volleyball Championship. Little suffered a season- and career-ending elbow injury in August.

Caroline Little, a junior at Milligan College in Tennessee, stands near the court as her teammates practice on Monday at the Tyson Events Center in advance of the 2018 NAIA Women's Volleyball Championship. Little suffered a season- and career-ending elbow injury in August.