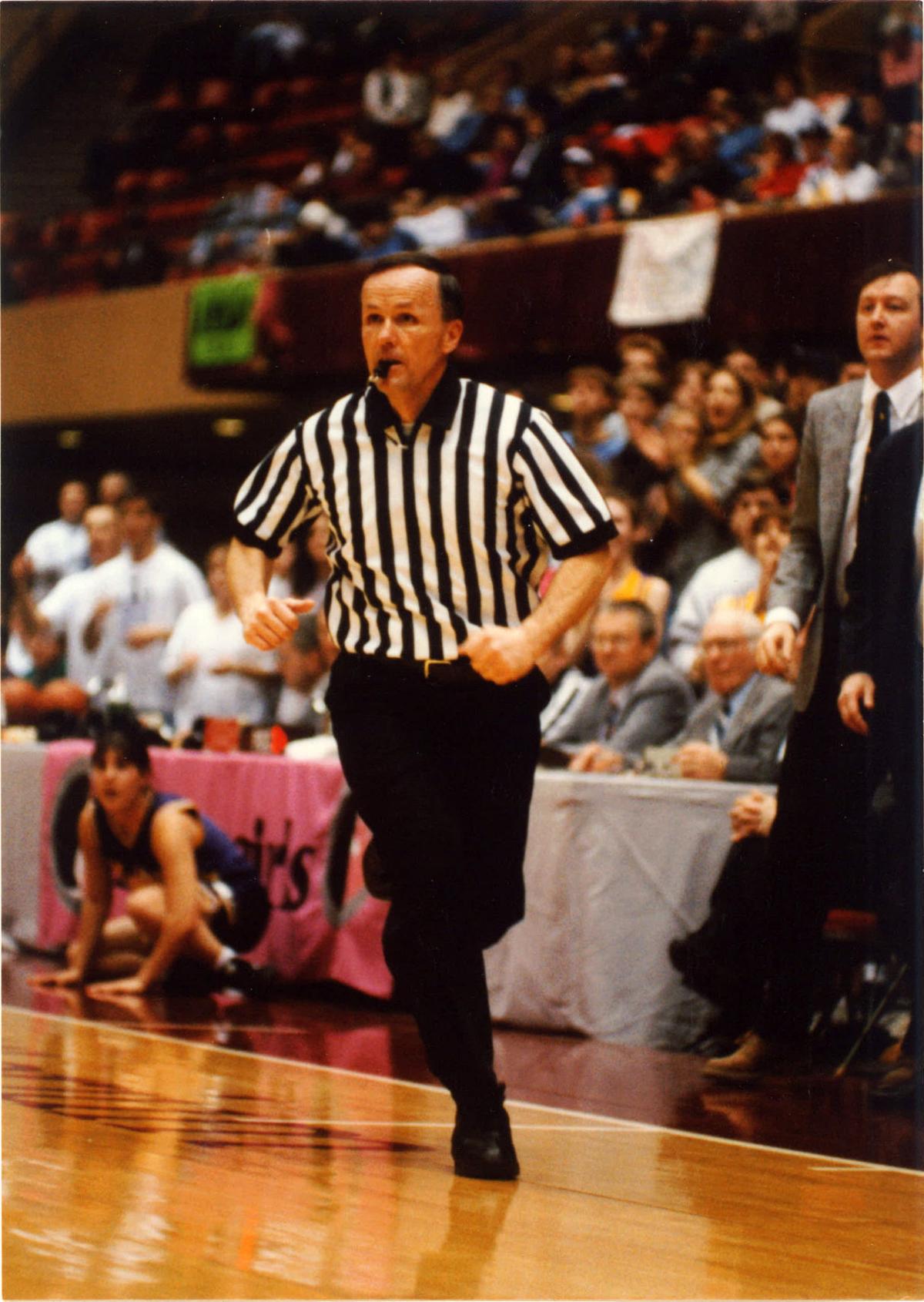 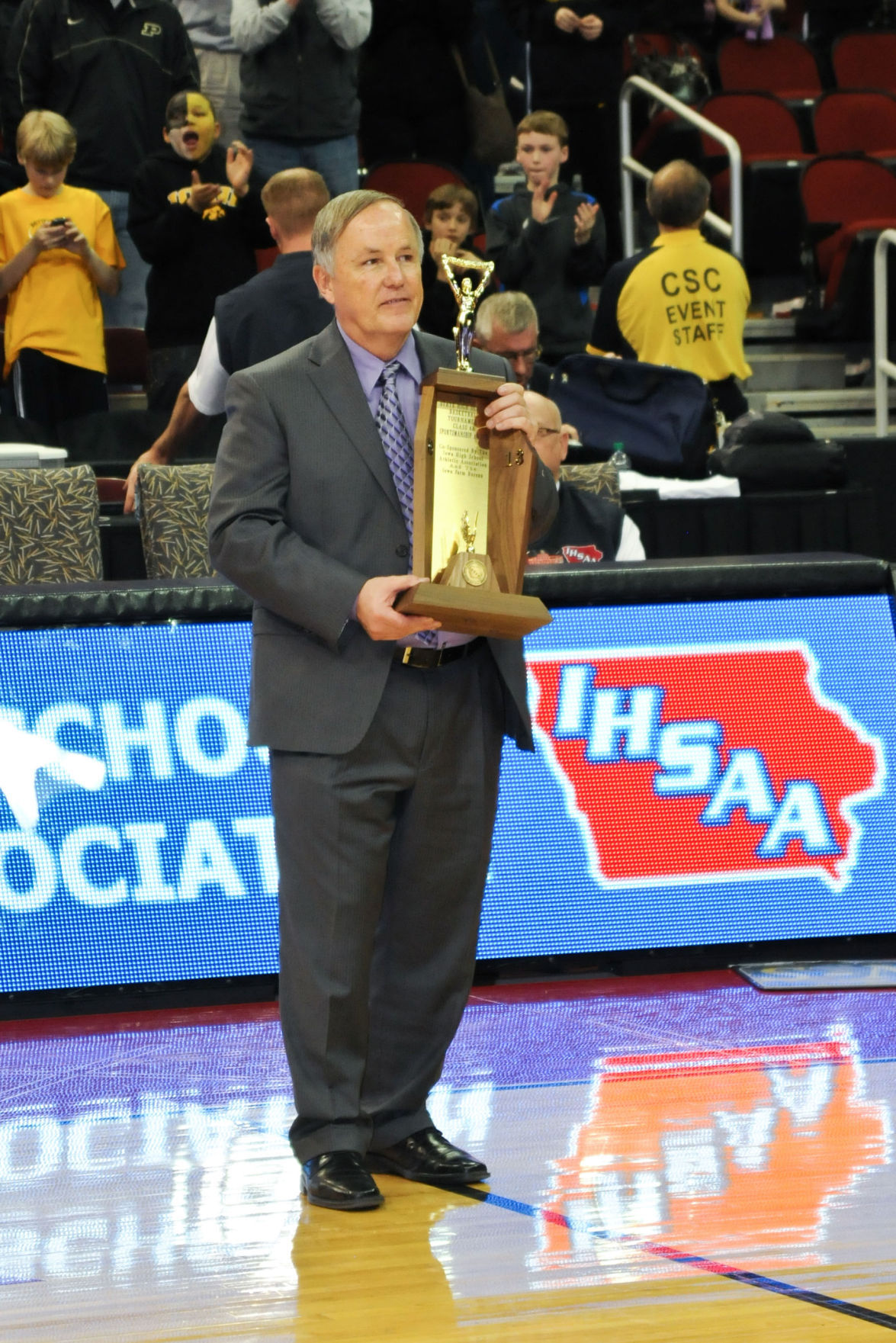 Roger "Smokey" Barr has been a steady presence at state tournaments organized by the Iowa High School Athletic Association for the past 13 years. The longtime leader of Iowa high school officials retires on Wednesday. 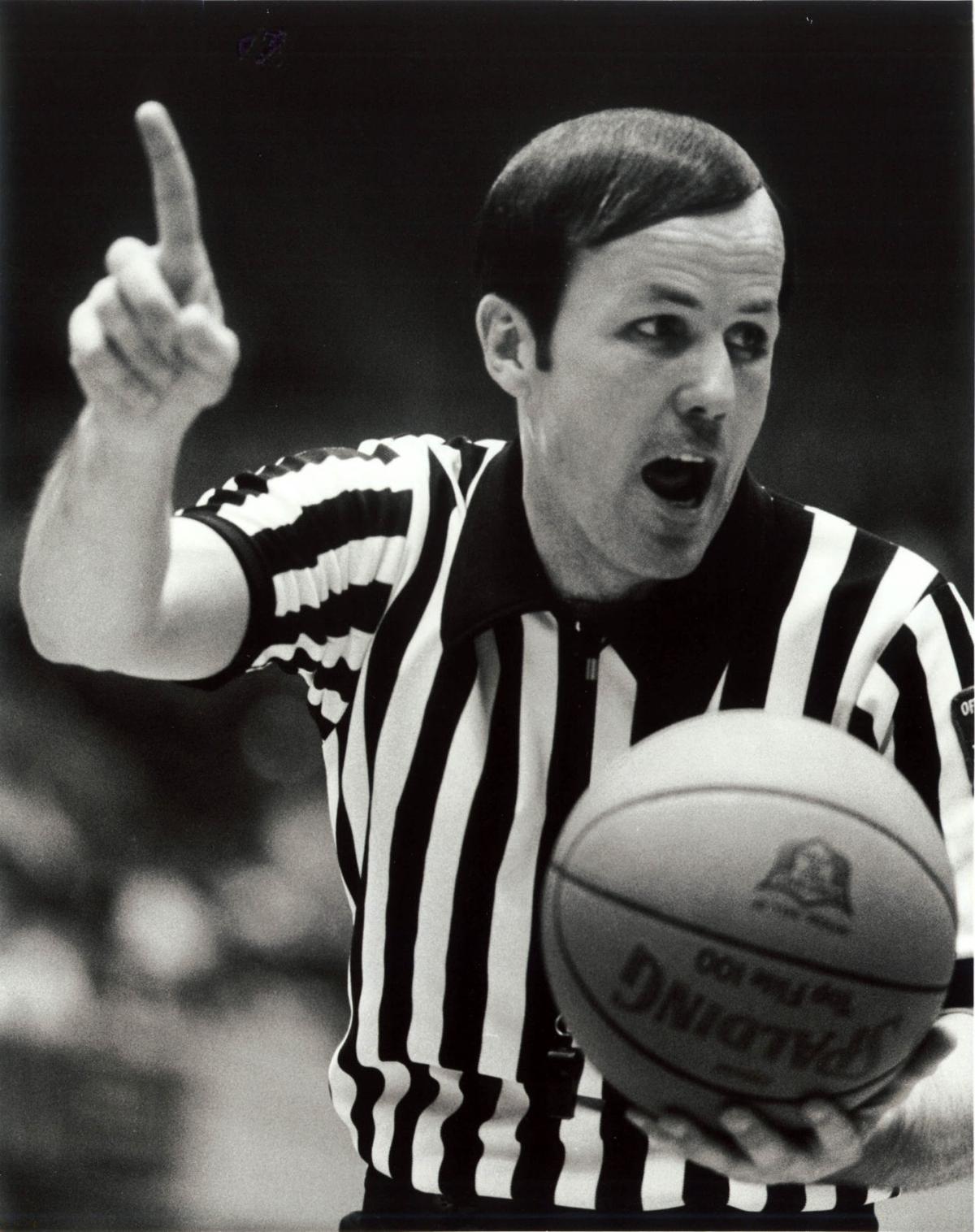 Roger "Smokey" Bar directs the action during a high school basketball game. The longtime director of officials for the Iowa High School Athletic Association retires on Wednesday, bringing to close a 44-year tenure of officiating prep contests in Iowa.

BOONE, Iowa | Roger "Smokey" Barr retires on Wednesday, hanging up his whistle after 44 years of work as an official for the Iowa High School Athletic Association.

If you have a gymnasium, a football field, or a baseball diamond, in Northwest Iowa, odds are "Smokey" has been there to make sure our preps played the game the right way.

I'll never forget sitting court-side as a fan chided "Smokey" for a call in a  basketball game. "Smokey" turned and smiled, responding in one swift motion: "I haven't missed one since the last one," he said.

What a comeback. I had to think about it. He got me. I was that mouthy fan.

Barr, a three-sport athlete (football, basketball and baseball) at Algona High School in Algona, Iowa, never played in a state tournament. Football didn't have the state playoffs in the late 1960s.

The Bulldogs advanced to the substate round in two of Barr's four years as a shortstop. They lost both games, falling to Goldfield High School one year and Breda St. Bernard's High School at the end of another.

Barr made his impact in future state tournaments. He officiated 12 title contests in boys basketball, 10 championship tilts in girls basketball, including the 6-on-6 state finale in 1993, the sport's final season.

He called 26 state tournaments in baseball and worked 22 years of the state football playoffs at the UNI-Dome in Cedar Falls.

After 30 years of officiating all over Northwest Iowa, Barr took a job with the Iowa High School Athletic Association as director of officials. That was 13 years ago. He retires at age 66. He and Donna, his wife of 41 years, will move to Kansas City, Missouri, and take up residence a couple of blocks from their daughter Julie and her family.

It took a couple of years before Barr, a 1968 Algona High graduate, followed his dad's path into officiating. The son of Everett and Leone (Sargeant) Barr was along for the ride with his dad during his formative years.

"My dad worked the state basketball tournament when it was held in Iowa City," Barr said. "He worked lots of state baseball tournaments and, back then, they made umpire clinic movies on 16-millimeter film to show positioning, etc. My dad was asked to go to Florida twice to make those movies."

Barr, who attended junior college in Centerville, Iowa, (to play baseball) and Buena Vista University in Storm Lake (to study), found work at Sportsman's, a sporting goods store on Lake Avenue in Storm Lake, Iowa, during his time at Buena Vista. He stayed on at Sportsman's following graduation.

Jim Reese, a longtime umpire and referee in Storm Lake, walked into the back of Sportsman's one day 44 years ago. He approached the 22-year-old sporting goods salesman and proclaimed, "You're going to be my basketball partner."

Barr declined the invitation. "I'd been with my dad while he officiated," he said. "I'd seen him get yelled at. That's not something I wanted to do."

Reese persisted. Barr gave in. He began working with Reese in gyms all over Northwest Iowa. The $25 he pocketed for those games helped the Barrs buy a few things through the years.

When he wasn't officiating, Barr was calling on those schools, filling equipment orders for the store owned by Norm Mutchler and Art Sutton, a former employee of Dwight Hauff at Hauff Sporting Goods.

In time, Donna and Roger Barr bought out Mutchler, and then Sutton. The Barrs owned and operated Sportsman's for nine years. They sold the store and Roger went to work for Central Bank in Storm Lake.

"I remember when I interviewed with Tim and John Brown (of Central Bank)," he said. "They asked me, 'You're not going to get a job with the Iowa High School Athletic Association, are you?'"

The question caught Barr off-guard. He didn't know the IHSAA was hiring. He said he'd never considered working there.

Barr helped manage a Central Bank site in Storm Lake for 18 months. And then he resigned, having accepted a job as director of officials for the Iowa High School Athletic Association, a position that might have been created with him in mind.

The Browns appeared prophetic. "Tim and John are great guys and they've been friends with me ever since," Barr said.

Barr has since conducted rules meetings while evaluating and helping assign officials working high school games in Iowa for a variety of sports. He's a familiar sight at boys state tournament venues and has connections across Iowa, from New Albin to Larchwood, from Hamburg to Keokuk.

He'll miss high school athletics in Iowa, and especially relationships he's developed with his bosses (Bernie Saggau, Rick Wulkow and Alan Beste), as well as his co-workers, coaches, student-athletes and the hundreds of officials he's come to know the past 44 years, guys like Jim Reese, Dick Utter, Pete Hansen, Lanny Grigsby and Larry "Pete" Peterson, men and women who know how challenging and rewarding it is to make the right calls while sprinting downfield, or up the court, or across the diamond.

The old official's health is good, as are his memories. He leaves the state with no regrets, a whistle and baseball clicker now occupying space on a shelf at home.

He remains indebted to Donna, who sat at home thousands of nights with daughter Julie and son Ryan, as he raced from sideline to foul line from late August through mid-July. He's also thankful for all who coached, played and attended those athletic contests, giving young people -- and the games they played -- a level of importance in our communities.

"It's been a great ride," Barr concluded. "I've been in a limo the whole way, surrounded by so many outstanding people.

Moville grad works to keep focus on the Hawkeyes

Last year, University of Iowa junior Brock Baldwin worked as a coffee and drinks server at the campus library in Iowa City.

Angie Paschall boarded an airplane in Dallas, Texas, one year ago, while her mother, Roberta Klingborg, stepped aboard a plane in Sioux City.

GALLAGHER: Support rises from the ashes

A week that began with a surprise keeps them coming for Brandon and Allison Lundgren, who've gone from escaping a fire to throwing themselves into the arms of strangers.

Roger "Smokey" Barr has been a steady presence at state tournaments organized by the Iowa High School Athletic Association for the past 13 years. The longtime leader of Iowa high school officials retires on Wednesday.

Roger "Smokey" Bar directs the action during a high school basketball game. The longtime director of officials for the Iowa High School Athletic Association retires on Wednesday, bringing to close a 44-year tenure of officiating prep contests in Iowa. 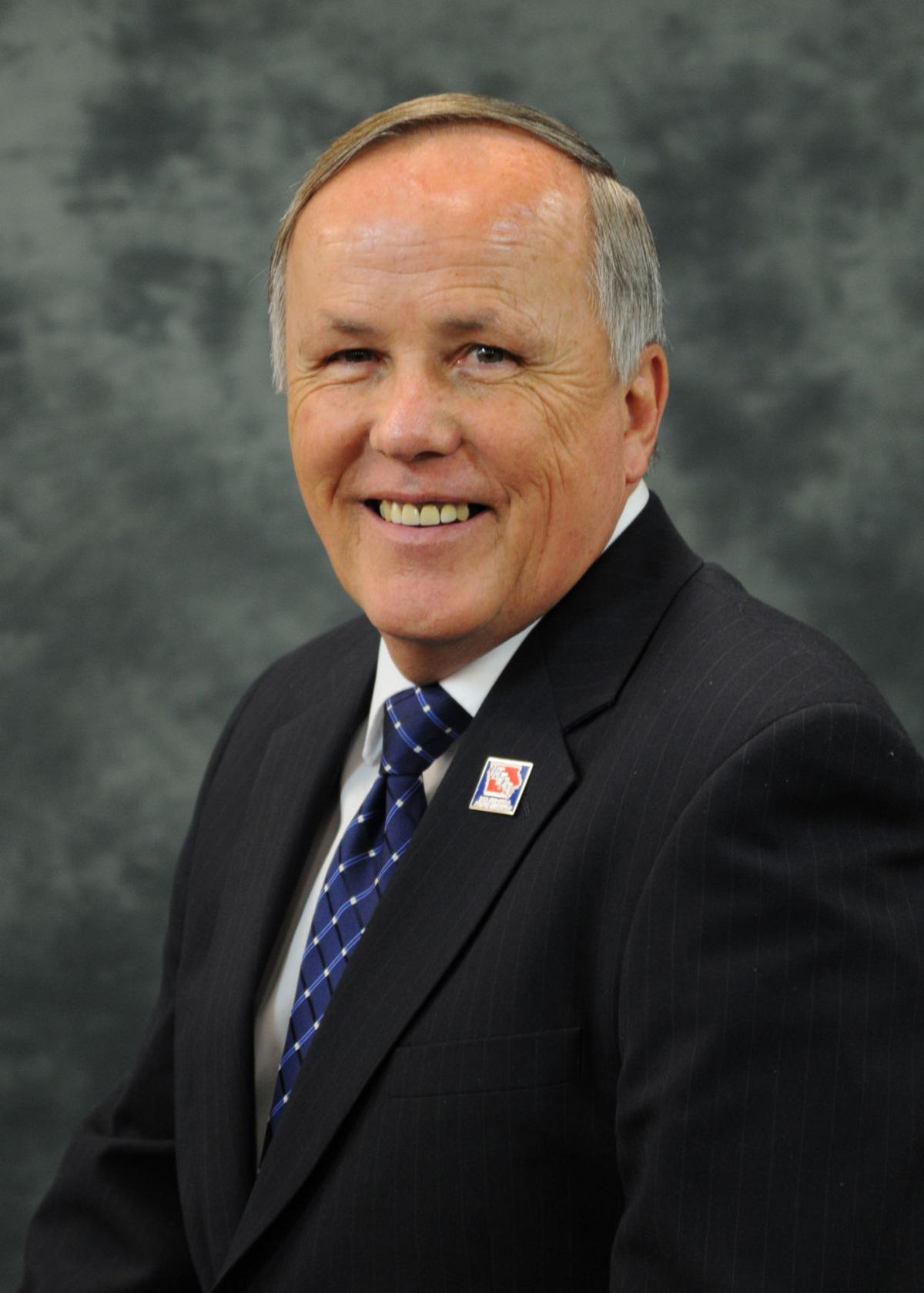