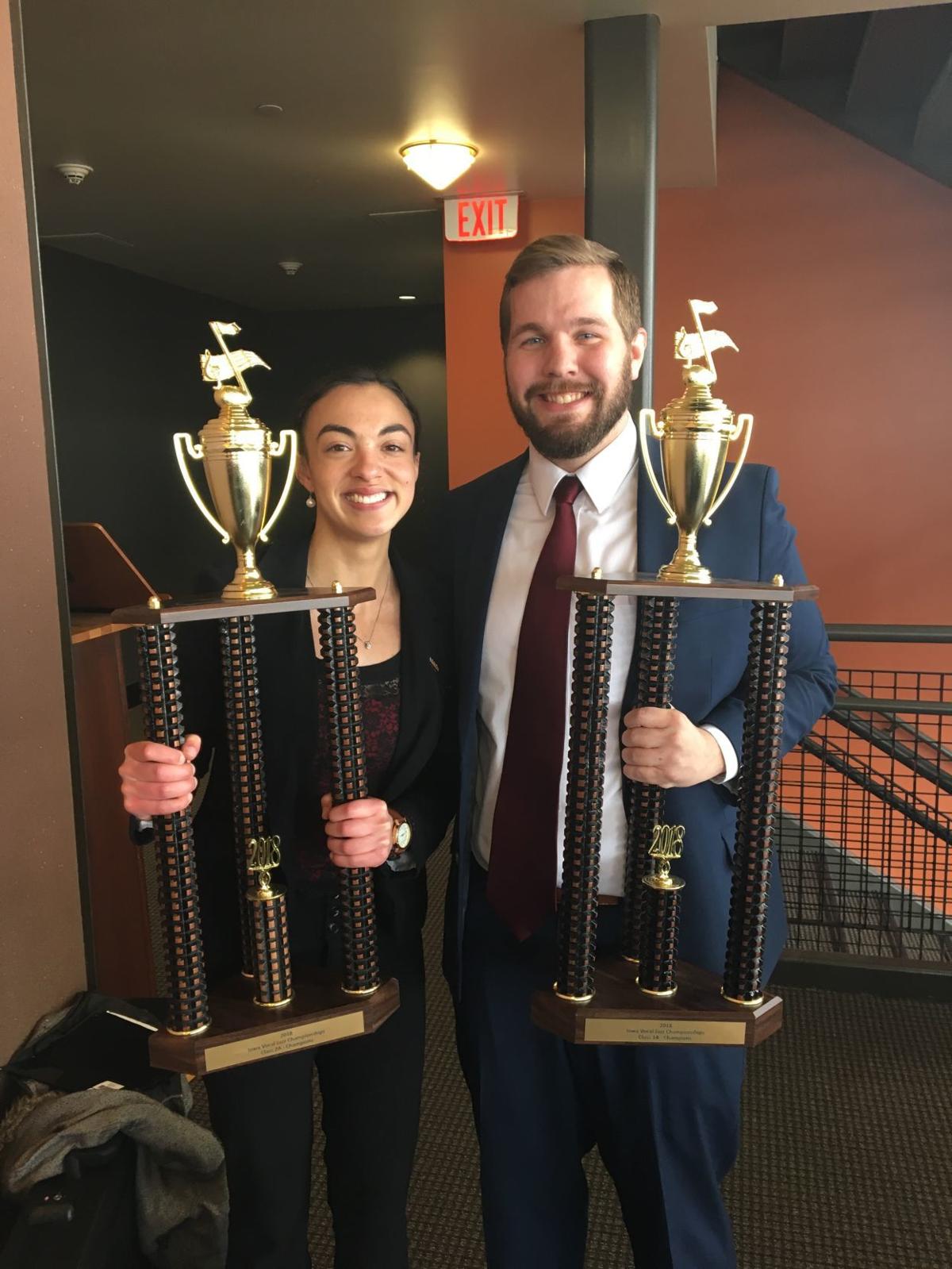 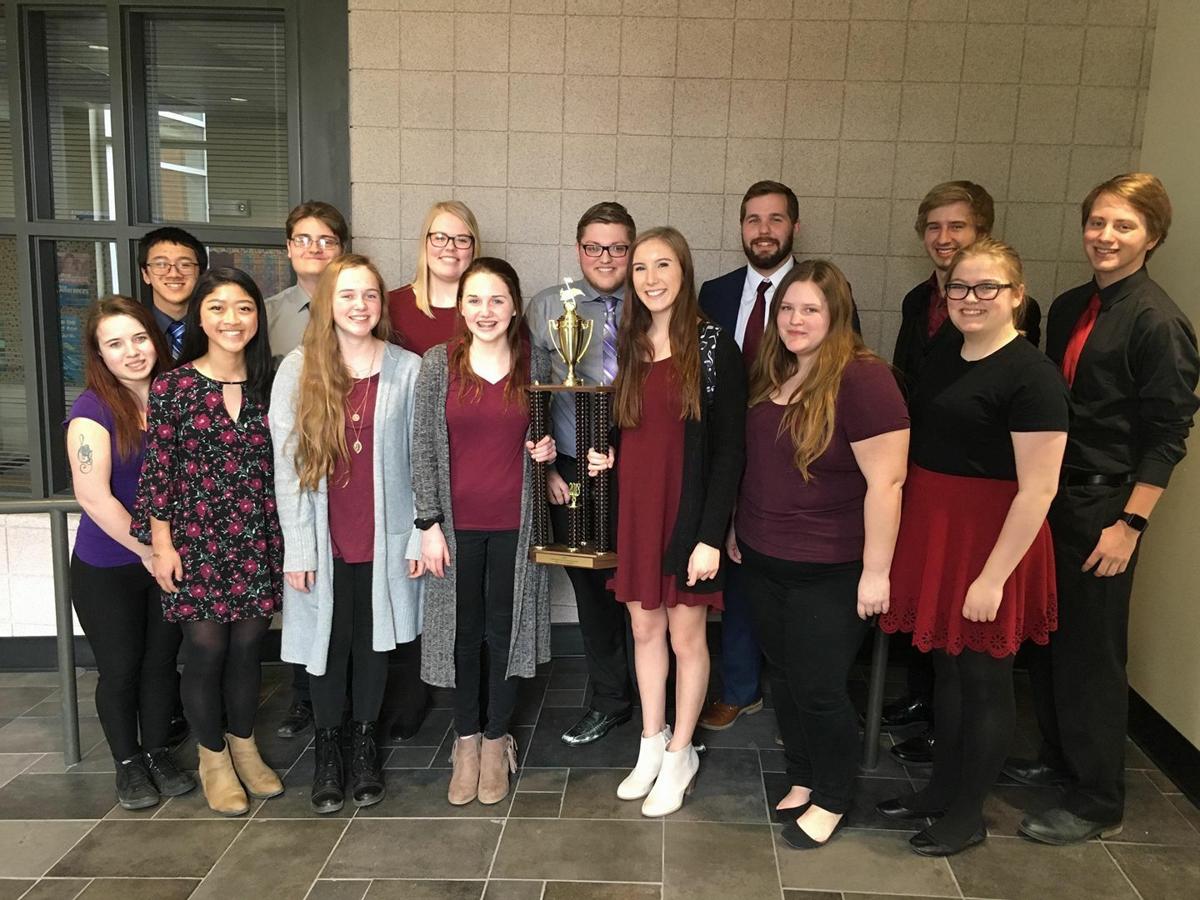 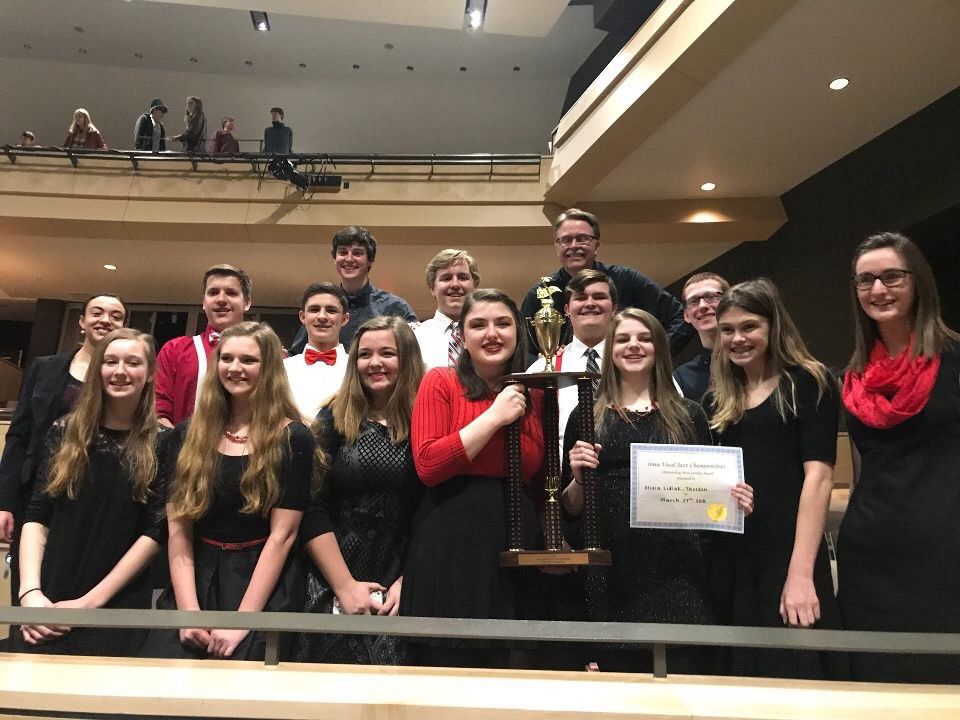 The jazz choir serving the high school based in Paullina, Iowa, finished eighth among eight jazz choirs vying for the state championship in Class 1A one year ago.

The title trophy provided a match to the one earned by Sheldon High School, which claimed its fourth consecutive vocal jazz championship in Class 2A. The crown was the first for first-year vocal director Caitlin Hanson, a 2013 Sioux City East High graduate.

Both Harms, a native of Independence, Iowa, and Hanson are graduates of Wartburg College in Waverly, Iowa. They sang together in the choir there; Harms, a tenor, and Hanson, an alto.

"They announced the place-winners from the bottom (eighth place) up," Harms said from his choir room at South O'Brien High School. "They got to second place and we hadn't heard our name announced yet. When they announced second place (Riverside High School), our kids screamed. They couldn't believe it. We had won!"

Harms said his group relied on cohesion in its performance as the South O'Brien singers didn't have an outstanding soloist. "This is a group that really works well together," he said. "There's no jealousy. They're very unselfish."

The 13 students in the group began rehearsing this three-song show in early November, settling upon practice sessions two to three mornings per week. Harms lauded the work of Brian Cole, the school's director of bands, in helping the jazz choir in its musical presentation. The rhythm section, after all, consists of three musicians who take the stage on Thursday at Iowa State University as South O'Brien attempts to place, or win, the Iowa Jazz Championships.

"Many of the concepts our kids learn in jazz they bring here," Harms said. "And many of these kids were also in the All-State (speech) choral reading group, too."

Harms said his parting piece of advice to the group involved having fun on stage. "I told them that knowing they did their best for each other while having fun doing it, it wouldn't matter if we finished first, seventh or whatever," he said.

Hanson said the Sheldon singers began working toward this goal in October. "We had many returning singers who had won in the past and they wanted to reach that goal again," Hanson said.

Devin Wolthuizen and Olivia Lidiak each earned outstanding soloist honors at the festival, one in which Sheldon edged MVAOCOU High School in Mapleton for the Class 2A championship.

"We had a warmup beforehand and I told the kids to live in the moment," said Hanson, a former East High Headliner. "I told them to be musical and to leave it all on the stage. It was their best performance of the season."

Here's a look at the place-winners at the 2018 Iowa Vocal Jazz Championships:

LE MARS, Iowa | Andrea Korthals stepped up during a pair of solos on Wednesday at the Northwest Iowa District Jazz Festival at Le Mars Communi…

OKOBOJI, Iowa -- The Pearson Lakes Art Center, which has enjoyed an uptick in financial support and membership the past two years, started an …

ORANGE CITY, Iowa -- Allison Schutt visited Northwestern College in the fall of 2013. As a high school senior from nearby Alton, Iowa, Schutt …

Sioux City West to present 'Songs for a New World'

SIOUX CITY -- The Sioux City Chamber Music will present the final concert of its 42nd season at 3 p.m. Sunday at First Presbyterian Church, 60…

SHELDON, Iowa -- Robin Spears banged the drum for public education on his way out the door.

PAULLINA, Iowa -- Brian Cole focused on his 2019 jazz band at South O'Brien High School, listening and watching as it worked through the late …