Become a Member
Read Today's E-edition
Share This
HORLYK: Dogs take to Tyson Events Center ice for a cause
0 Comments
Share this 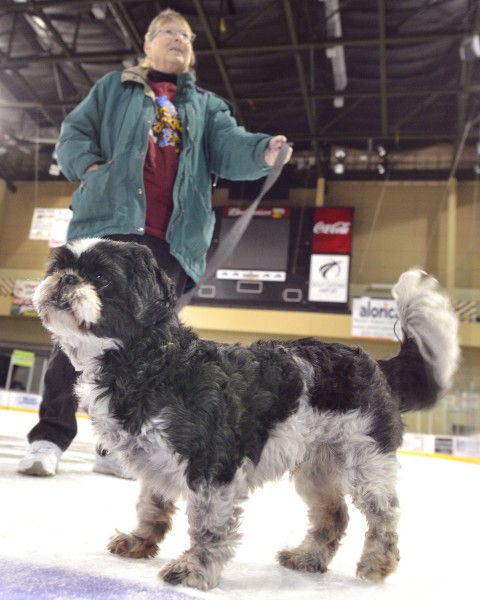 Grizzly, belonging to Roberta Elwell, of Jefferson S.D., tries to maintain footing on the ice at the Tyson Events Center in Sioux City in January 2013. The Siouxland Humane Society is holding a dog race fundraiser at the area. 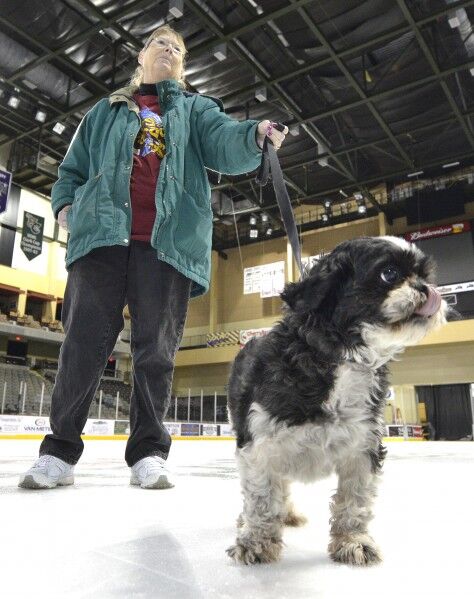 Grizzly, a Shih Tzu, tries to maintain footing on the ice at the Tyson Events Center in Sioux City on Wednesday, Jan 9, 2013.

SIOUX CITY | First there was Gretzky. Now, let us introduce you to Grizzly.

The 6-year-old Shih Tzu may not be as speedy as hockey legend Wayne Gretzky but a black and white dog can be surefooted on ice.

Grizzly is one of the dogs participating in the lap dogs race that will be held between periods at tonight's Sioux City Musketeers' hockey game at the Tyson Events Center.

Dogs -- all small breeds and weighing less than 20 pounds -- will be racing from one end of the ice rink to the others for a chance to win prizes in the first annual competition sponsored by the Musketeers and the Siouxland Humane Society.

Well, at least that's the plan, according to the Humane Society's Jerry Dominicak.

"I've seen some hilarious YouTube videos of similar ice rink dogs races," he admitted. "Some dogs will actually race while others simply want to play on the ice. Either way, it will be fun for both dogs and masters."

"Grizzly's only experience on ice has been to maneuver his way across a driveway in wintertime," the Jefferson, S.D., woman said. "It will be interesting to see how he'll do on an ice rink."

Ellway fell in love with Grizzly, a shelter dog, more than five years ago.

"People look down on shelter animals because they think these animals will be hard to train," she said. "That certainly isn't the case with Grizzly, who is an angel when he's not being a pain in the rump."

In fact, Grizzly gets along fine with Elwell's other dog, a Husky named Mia.

"It's fun seeing a 60-pound dog playing with such a little dog but Mia and Grizzly are the best of friends," she said.

The two dogs even get along with Elwell's 3-and-a-half year old cat Molly, also a shelter animal.

Dominicak agrees with Elwell, regarding the not-always favorable rep of shelter animals.

"Some think of (shelter animals) as being throwaways," Dominicak said. "They don't take into consideration that sometimes people move or situations change, making pet ownership not feasible for some people."

Which is why some people will reluctantly need to bring their cherished pets to the Humane Society for adoption.

Elwell, a longtime Humane Society volunteer, knows firsthand the importance of animals in a person's life. Several times a week she will take one of the Humane Society's shelter dogs to area nursing homes.

"It's amazing to see a nursing home resident's reaction to a dog," she said. "The resident may not have said anything the entire day but at the sight of the dog, his eyes will light up at the sight of a furry friend."

A animal lover who likes everything except rats and snakes, Elwell said she's always been partial to dogs.

"Dogs have a natural kindness to them," she suggests. "Nobody can be in a bad mood when a dog's near by."

This is why the normally non-athletic Elwell will be on the ice along side Grizzly.

"I think Grizzly will do just fine but I'm a little worried about myself," she said with a laugh. "If I slip, I have a further way to go than Grizzly."

What: Lap dog ice races during the Sioux City Musketeers game, sponsored by the Musketeers and the Siouxland Humane Society

SIOUX CITY | The Siouxland Humane Society is selling gourmet chocolate- and caramel-dipped apples as part of an annual fundraiser.

HORLYK: Wanted: Swedish Fish for Saturday in the Park

Before performing at Saturday in the Park on July 7, entertainers like singer Melissa Etheridge will be able to feast on food researched, located and presented by Mary Ann Johnson.

Graduating from North High School in May 2011, Chris Roan, of Sioux City, looked skyward and saw his future. He started taking flying lessons.

Diagnosed with testicular cancer and suffering from arthritis, Avalanche desperately needs to shed a few pounds to improve his quality of life.

While studying to become a court reporter, Maria Schultz's only frame of reference for the profession came from watching "The Carol Burnett Show."

A pair of battered men's shoes sits at the foot of Diana Buddi's Christmas tree. The shoes -- weather-beaten with age and featuring huge holes in their soles -- serve as a reminder that no matter how badly life can present itself, others have it much worse.

Grizzly, belonging to Roberta Elwell, of Jefferson S.D., tries to maintain footing on the ice at the Tyson Events Center in Sioux City in January 2013. The Siouxland Humane Society is holding a dog race fundraiser at the area.

Grizzly, a Shih Tzu, tries to maintain footing on the ice at the Tyson Events Center in Sioux City on Wednesday, Jan 9, 2013.