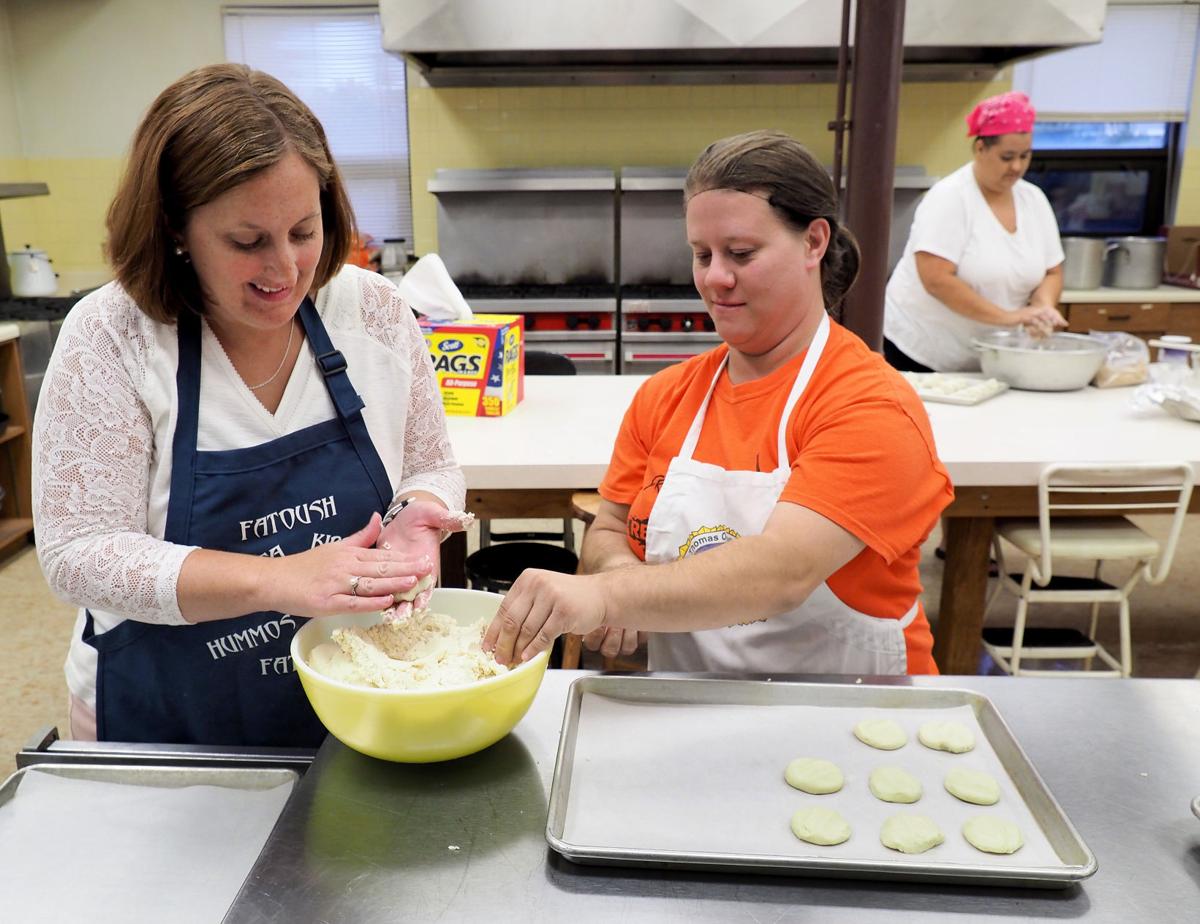 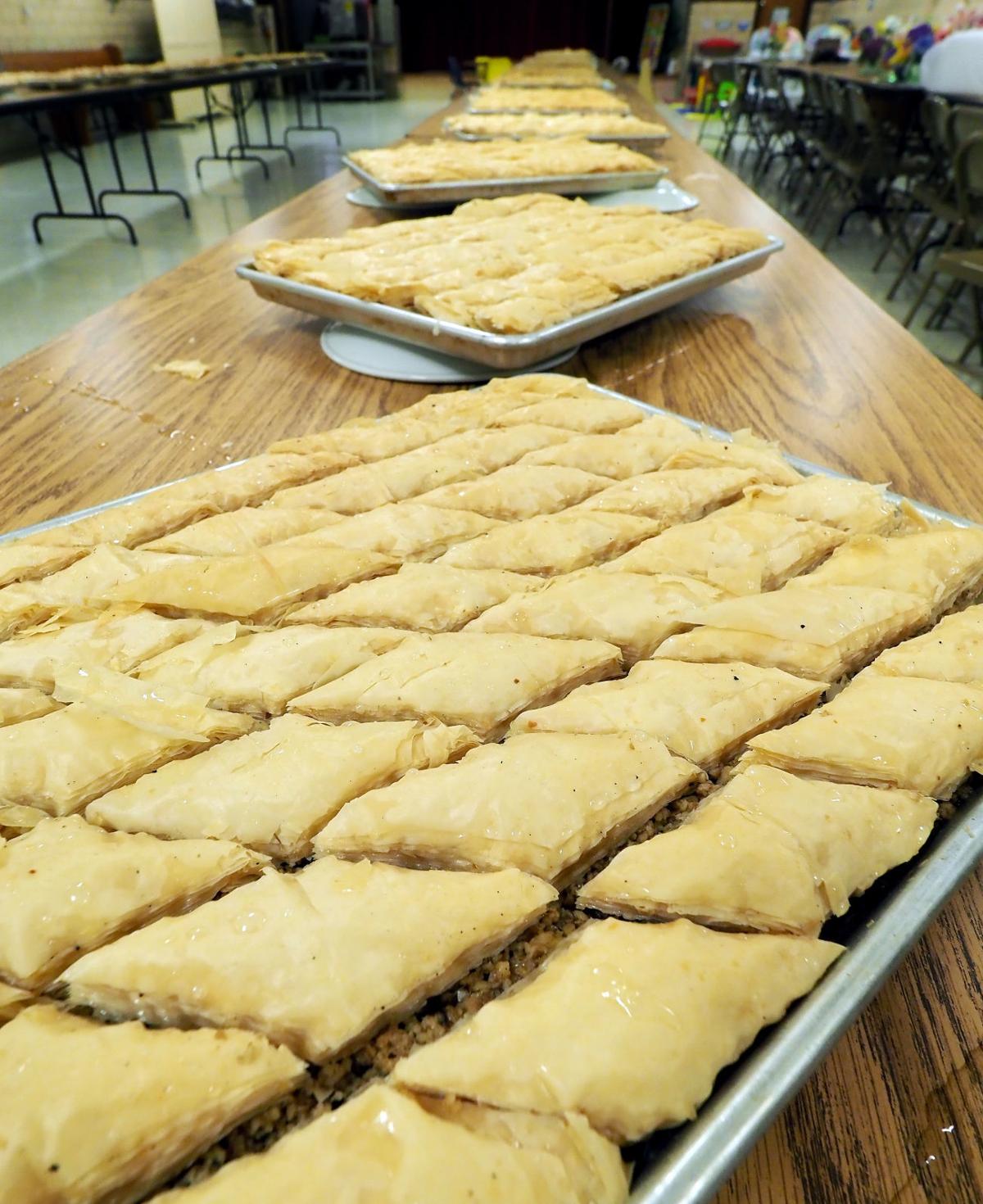 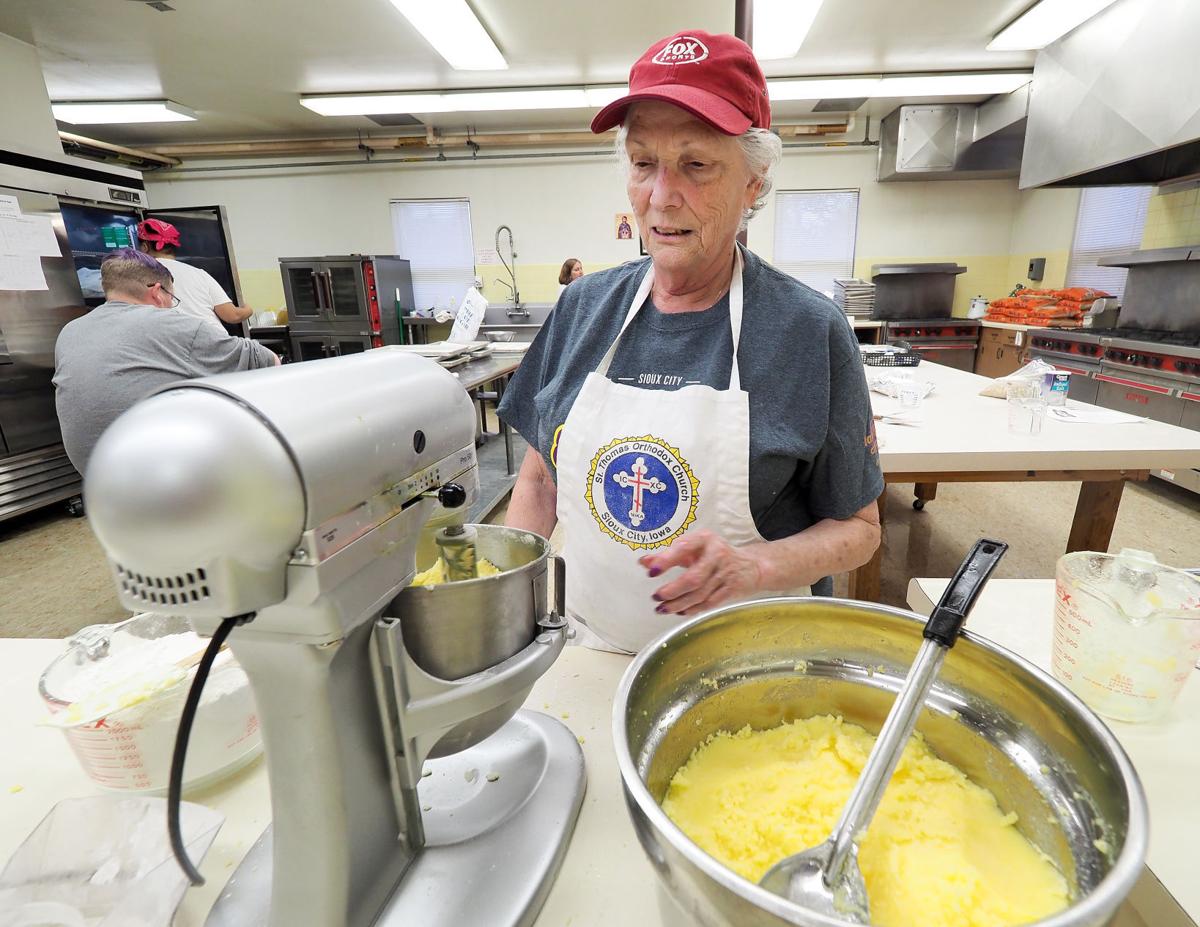 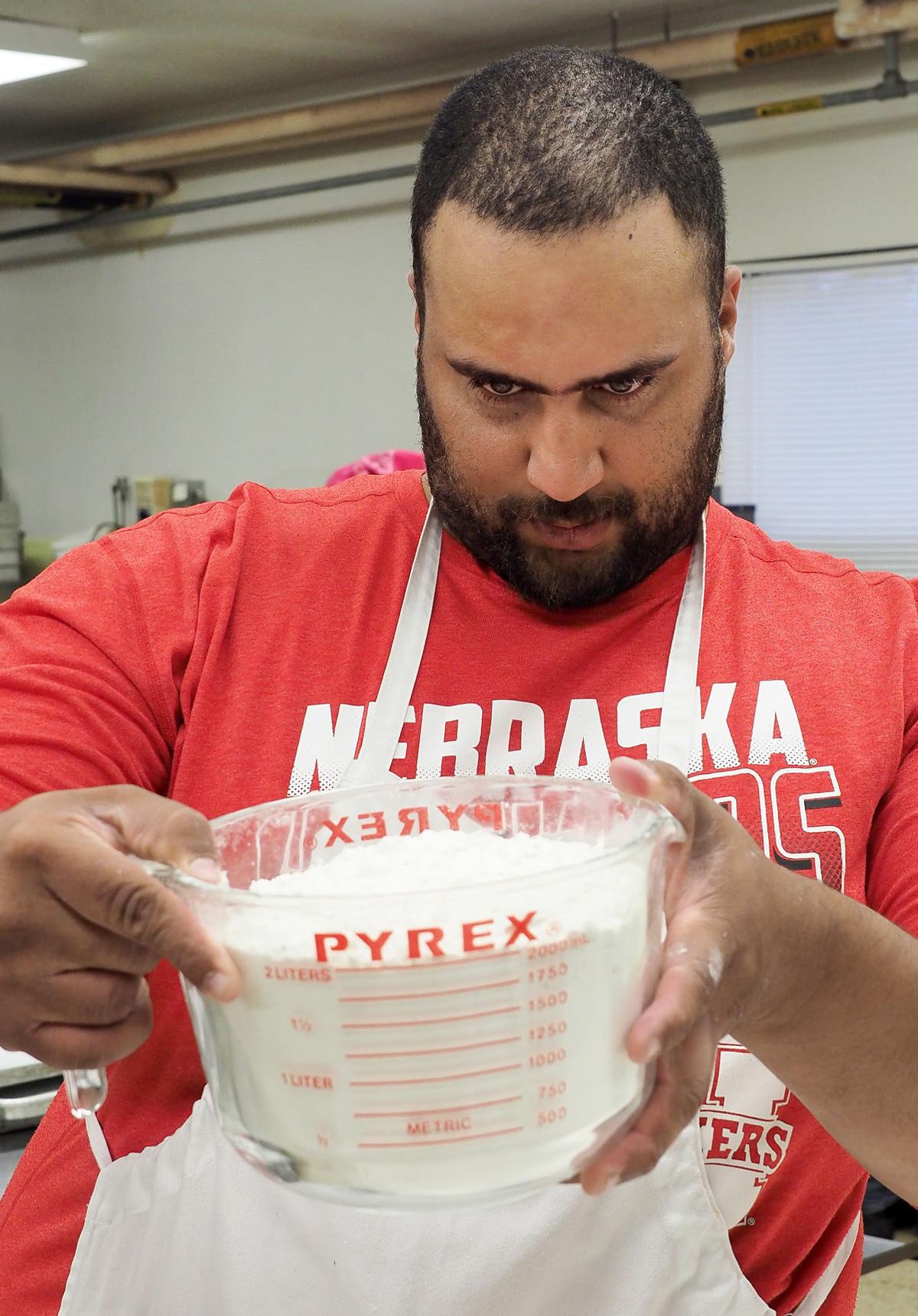 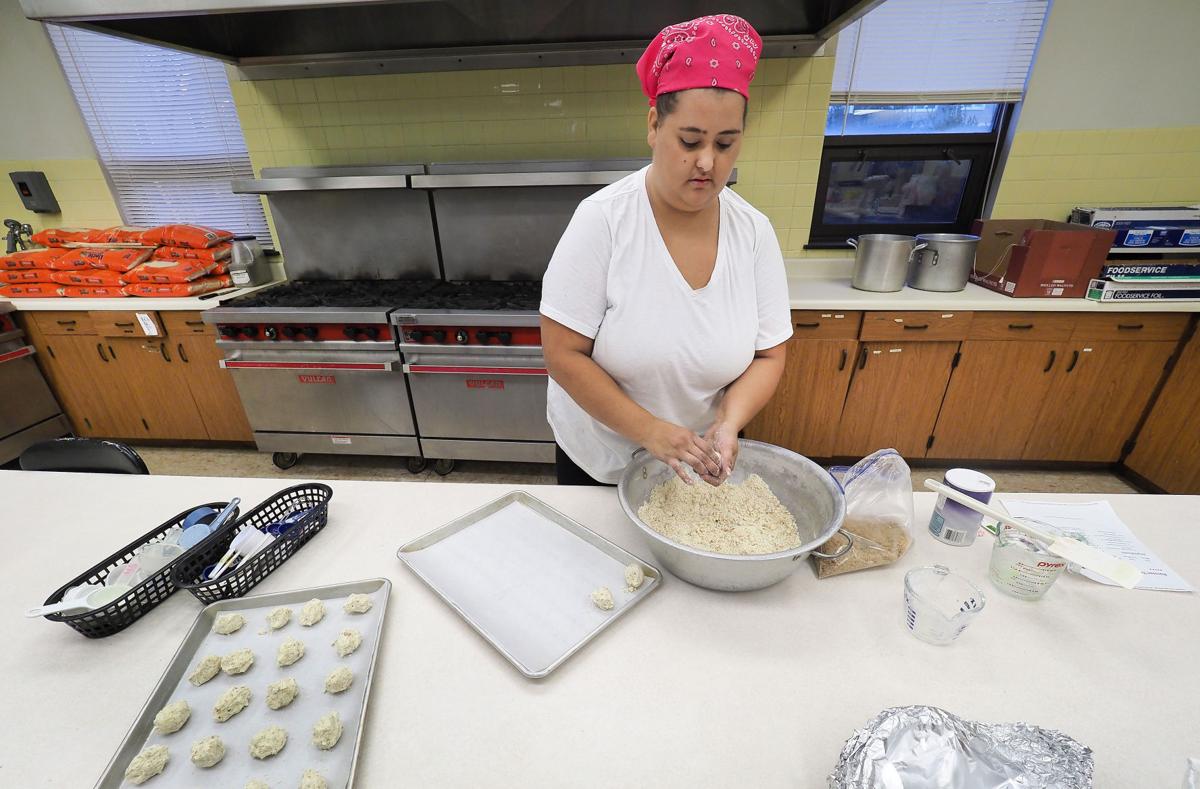 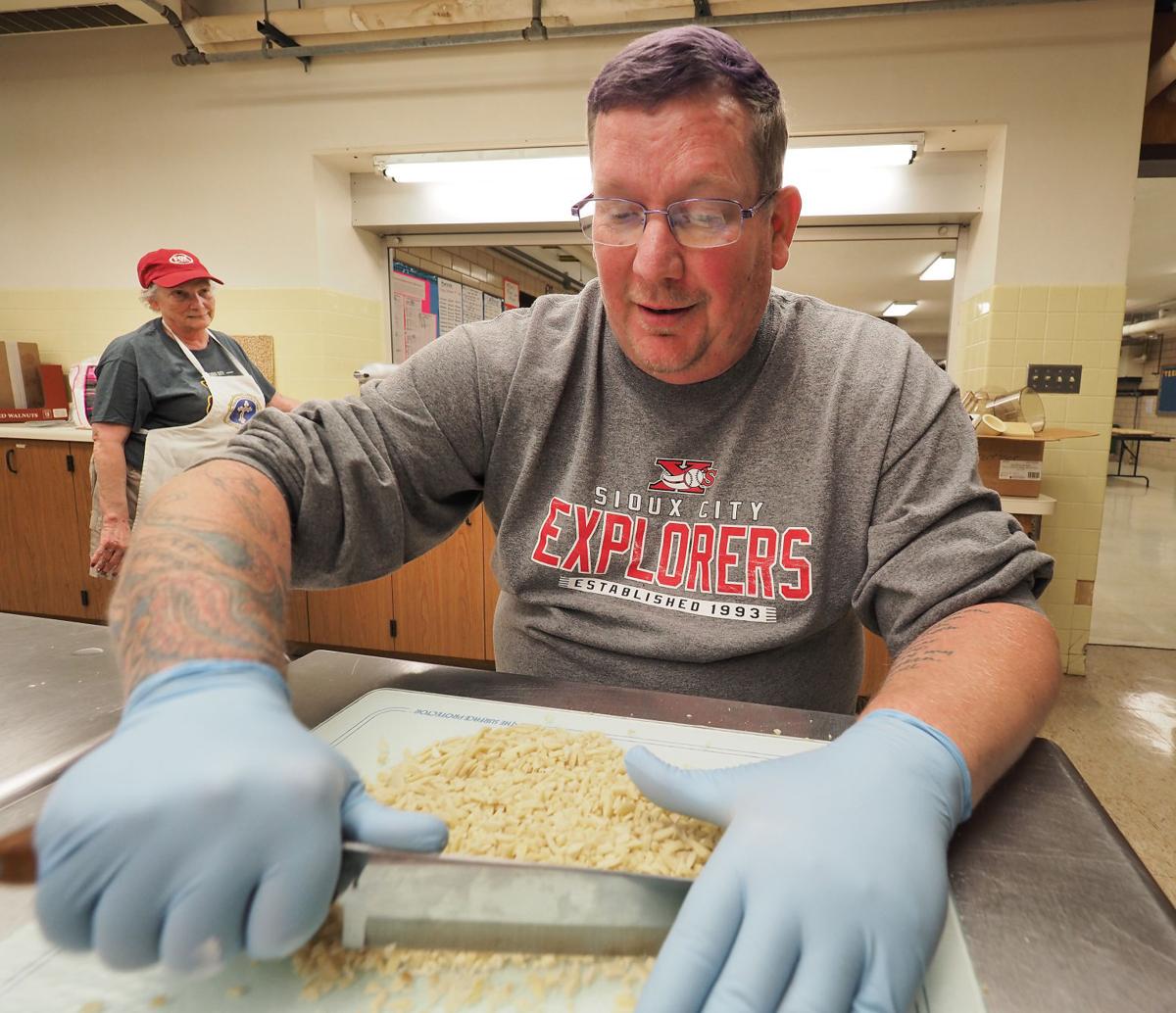 Troy Martin chops almonds in the kitchen of St. Thomas Orthodox Church. The 1100 Jones St. church's Syrian-Lebanese dinner returns Sunday. A portion of the event's proceeds will be going toward The Warming Station in Sioux City.

"You know a cookie will be good if you eat it before you bake it," the Sioux City woman said in the kitchen of St. Thomas Orthodox Church. "And these gribbe cookies (a Lebanese butter cookie) are outstanding."

Bottei is one of the cooks preparing food for the church's Syrian-Lebanese dinner, taking place from 12:30 to 6 p.m. Sunday.

The open-to-the-public dinner -- a tradition at the 1100 Jones St. church for more than 60 years -- was discontinued three years ago.

"You could call it a case of volunteer burnout," Bottei admitted. "The volunteers that we had relied upon were getting older and the younger generation wasn't able to step up."

That was the case until a few months ago.

"As a church, we missed hosting our diners," Bottei explained. "More importantly, the community missed having a chance to taste Middle Eastern cuisine."

However, this year's dinner will be a bit different, according to volunteer cook Erica Stickney.

"In the past, we'd serve sit-down dinners and we'd have people waiting a long time to eat," she said. "While we'll have tables set up, this year's dinner will be carry out."

In addition, a portion of the proceeds will be going to The Warming Station, a public charitable organization that provides temporary emergency shelter at 916 Nebraska St. for men, women and families in the Siouxland area.

While some things have changed, the delicious Mediterranean cuisine remains the same.

This year's menu will include kibbee (a baked meat dish made with wheat); yabrah (a cabbage roll stuffed with beef, rice and tomatoes); lubee (green beans served in a rich tomato and meat sauce); ruz (Syrian rice accented with tiny orzo); salata (a Syrian salad with a homemade Mediterranean salad dressing); and talamee (a traditional Syrian bread).

Glancing at a recipe, Stickney formed oval-shaped pieces of dough made of butter, sugar, flour and finely-chopped pecans.

"This is a very traditional Syrian pastry but other countries have it as well," she said. "It's been called a Russian Tea Cake, a Mexican Wedding Cake, even, a Hawaiian Delight. But I still associate it with Syria."

Stickney said she's been volunteering her culinary expertise for more than 25 years.

"I was a kid when I started and it's still fun to share our recipes with the community," she said.

Continuing to shape pieces of dough, Stickney recalled all of the camaraderie and laughs she's had in St. Thomas's kitchen.

"You forget how much you enjoy Mediterranean food when you stop making it," she said. "Whenever I eat kibbee or lubee or baklawa (a classic dessert made with phyllo dough, chopped walnuts and a lemony syrup called attayr), I call it Middle Eastern soul food."

"This food is unpretentious, comforting and, yeah, it's good for your soul, Stickney said with a smile.

WHAT: Authentic Syrian-Lebanese dinner with a menu of carry-out foods as well as a bake sale and hourly tours of the church

COST: $13, with a portion of the proceeds going to The Warming Center, a 916 Nebraska St. organization providing temporary shelter for men, women and families in Siouxland.

Taste of Greece: Many innovations added to this weekend's Greek Fest

SIOUX CITY | How far would you travel for a chili dog with the works?

SIOUX CITY | Chris Ver Steeg is in the process of establishing a brand new church in Sioux City, with the help of a team of people that have f…

New, laid-back church in Hawarden takes aim at the 'unchurched'

HAWARDEN, Iowa | Something funny was happening at West Sioux High School on Sunday morning. A man in a monkey suit greeted people walking into…

SIOUX CITY -- It's easy to be dazzled when diples is being made.

Troy Martin chops almonds in the kitchen of St. Thomas Orthodox Church. The 1100 Jones St. church's Syrian-Lebanese dinner returns Sunday. A portion of the event's proceeds will be going toward The Warming Station in Sioux City.