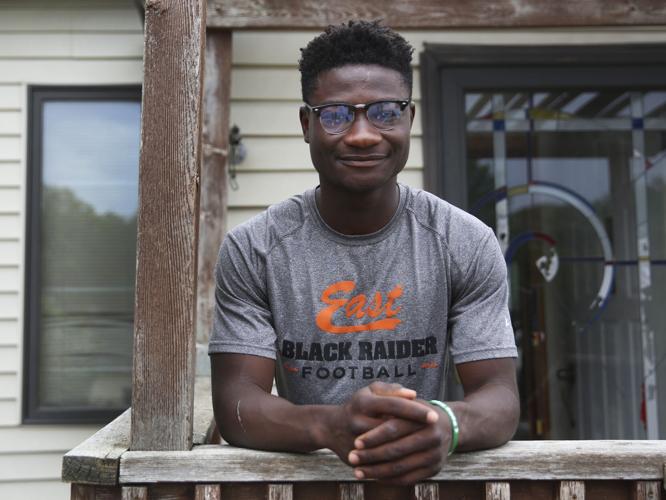 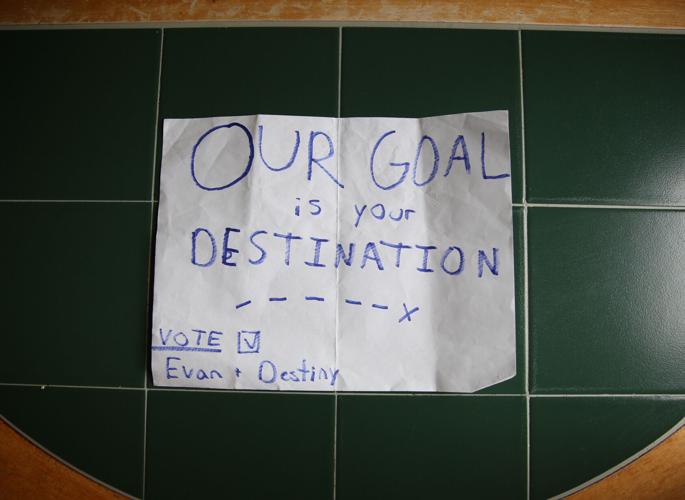 A poster from Destiny Adams and Evan Janzen's campaign on Thursday in Sioux City, Iowa. The two met on a bus ride to Camp Dodge, Iowa for the 2022 American Legion of Iowa Boys State.

SIOUX CITY -- It may have been Destiny Adams' destiny to be elected governor during the American Legion of Iowa's Boys State competition.

Or at the very least, the East High School's first name made for a very catchy campaign slogan.

"All of my campaign material played off of 'this is my destination' or 'this is our destination,'" Adams said. "I think my name was memorable enough to get me noticed."

Sponsored by the American Legion, Iowa Boys State is a week-long, hands-on youth civics leadership experience in the operation of the democratic form of government.

Participating students were chosen based on referrals of local American Legions posts, as well as their civics teachers. Adams, along with classmates Jackson Johnson and Nate Ruiz, represented East.

"I had to campaign to become governor, writing papers, giving speeches and persuading others to vote for me," Adams said.

That was a new experience for Adams, who was born and lived with his parents, Davidson and Ruth Adams, in the West African country of Nigeria until the family moved to the United States when he was 11 years old.

"I think I appreciate American history more because it is new to me," he said. "Everyone can have a voice in a democratic government."

Ironically enough, Janzen's family is moving to Sergeant Bluff and, next year, he'll be a student at Sergeant Bluff-Luton High School.

"I plan on staying in touch with Evan," Adams said.

A wide receiver on East's Black Raiders football team, Adams said he was considering studying architecture or engineering in college.

He's even considering a career as an artist or becoming an entrepreneur.

While Adams wasn't selected to be a delegate at the American Legion's Boys Nation, taking place in Arlington, Virginia, on July 22, he will be one of the alternates.

However, he now has the confidence to speak in public and have his voice heard.

Would Adams ever consider a career in politics?

The youngest in a family of 12 children and the only sibling born in the United States, Crystal Luna knew she had to make the most out of every opportunity presented to her.

How do you make a better burger?

Michael Widjaja, 17, will be one of just six trumpeters in the U.S. to play with the All-National Honor Ensemble during a virtual event.

A poster from Destiny Adams and Evan Janzen's campaign on Thursday in Sioux City, Iowa. The two met on a bus ride to Camp Dodge, Iowa for the 2022 American Legion of Iowa Boys State.