SIOUX CITY -- In the days immediately after the May 25 death of George Floyd, news loops contained a steady stream of photos, videos and stories from racial justice protests in major cities across the country.

Rallies and chants of "Black Lives Matter" were common in much smaller cities, too. For three nights in a row, protesters gathered outside Sioux City's police headquarters. Rallies have taken place in Spencer, Storm Lake and other Siouxland communities.

The emotions of all those protests for racial equality will cool, as we've already begun to see. Many of us will move on, figuring that the activists made their point, the Legislature took action, everything's good.

But the effort is far from over, local activists say. They're challenged to make sure the issue doesn't become yesterday's news. The outpouring of support was great, but it's the work that is done in the weeks, months and years ahead that will lead to change.

"My personal perspective is now we must look forward, we cannot let the past keep us hostage. We have to move forward with focus, tenacity, courage and hope for the future," said Monique Scarlett, a Sioux City school board member and founder of Unity in the Community, a group that encourages partnership with community members and law enforcement.

She and Ike Rayford, president of the local chapter of the NAACP, are encouraged by what they've seen in Sioux City and beyond since Floyd died after a Minneapolis police officer knelt on his neck for more than eight minutes.

In addition to the aforementioned protests outside the Sioux City Police Department, community and faith leaders have gathered for peaceful, public events at the Law Enforcement Center and at Cook Park. Similar events have taken place across the country. Some included violence; many did not.

There's a sense of enough is enough, Scarlett said.

"This time people are saying we've begged. We've been martyred. This time we're going to make change happen," she said.

The result, Rayford said, seems to be that police chiefs, mayors, governors and other elected officials are now giving more than lip service to those seeking change.

"It feels like finally they're listening," said Rayford. "It feels different. Before, there was no hope. Now I do feel like people are truly listening."

Rayford believes the video of Floyd's death made an impact. Past incidents that led to protests in cities such as Ferguson, Missouri, and Baltimore were never seen. This time, there was no deniability.

"We saw a man dead. This time we saw it," Rayford said. "Now people are starting to see it. They're seeing it and believe it."

And now that the movement has their attention, it's time to hold it. The noise from the protests will fade, but the call for change must remain loud and clear.

The challenge is: how?

There are many ways, of course, and they begin as early as elementary school, Scarlett said. As a school board member, she said she'll continue to promote education so children understand civics, understand what's going on in the world around them, so that, as they get older, they have a sense of direction.

That leads to involvement. Scarlett urges people of all ages to join and become active in organizations seeking change. It also includes registering to vote, learning what candidates stand for and then casting a ballot.

Public officials, Rayford said, must be held to their word. If they promise to meet with community groups to find solutions, to take action, Rayford said he'll continue to ask them about it until it's done.

Police leaders and officers show up for block parties and public forums. Civil rights groups and police Chief Rex Mueller all want every officer outfitted with body cameras. Rayford said the NAACP continues to push for a citizen review board to not only review applicants to the police department but also to hold officers accountable in cases of alleged misconduct.

"The only thing we've always said is we want the police to police themselves," Rayford said. "In Sioux City, I am so fortunate to have a police chief that's willing to sit down and have a conversation. I am happy to live in a city where I can brag on our police department and I can brag on our city council."

Sioux City has a chance to be an example for bigger cities, Scarlett said.

"It starts in our home town and then grows abroad," she said.

She and Rayford are encouraged by what they've seen in the days since Floyd's death. Police departments are outlawing choke holds and other tactics. Mayors and city councils are discussing reorganizing police departments.

"In my gut I feel that a change is coming and we're in the process of it," Rayford said.

All those protests that we witnessed the past couple weeks may just have been the beginning steps of that process. It's nearly certain they won't be the last.

OTHER VOICES: It's time to make changes together

Sermon: Pentecost and the killing of George Floyd

What actions on racial equality would you like to see taken in Siouxland? Sound off at facebook.com/SiouxCityJournal

The project shifted into a higher gear this past weekend with a ceremonial ground breaking. Construction is planned to stretch over two years, with a goal for dedication on Veterans Day 2021.

Sioux City Rev. Robertson on Juneteenth: 'We are still fighting for that equality'

The Rev. Jeremy Robertson, pastor of Mt. Zion Missionary Baptist Church, said the day has the potential to heal. “All we want as a race is to be treated fairly, equally,” he said.

Felon voting order will be done in time for election, Reynolds says

Reynolds said she does not have a specific timeline, but pledged the pre-election enactment. Iowa is the only state that requires felons to petition the governor to have their voting rights restored upon completion of their sentence.

The 14-member Law Enforcement Vision for Equality Task Force is a partnership between the Iowa Police Association and Iowa-Nebraska NAACP State Area Conference of Branch.

Brig. Gen. Larry Christensen now is the last active member of the Iowa Air National Guard who once flew the A-7, a distinction that drew a smile and a chuckle.

"We firmly believe these cameras will be a positive advancement for our department, our officers, and our citizens, and we look forward to deploying them," Police Chief Rex Mueller said.

Reynolds' order restores the right to vote to felons who have completed their sentences or have been paroled or placed on probation, and sets up a process where she will daily restore voting rights of eligible felons going forward.

The body is an advisory committee that will provide guidance to the council on matters relating to diversity, inclusion and equity.

Though minorities make up nearly 31 percent of the city's population, they account for just 8.8 percent of the Sioux City Police Department's 125 sworn officers. Police leaders across metro Sioux City say they're seeking ways to diversify.

In the past 20 years, many officials say, they have worked to improve minority representation but are hampered by outside forces. Chief among them: Many communities can’t compete with the salaries or quality of life opportunities offered elsewhere.

Police Chief Rex Mueller said all officers have the cameras, which are worn on the middle of the shirtfront and make speech-like noises when they are switched on. Officers will be required to turn them on during any interactions with the public.

Sioux City teen speaking up for others

Along with two others, Dominic Eastman co-founded the Sioux City chapter of March for Our Lives in March 2019, and his activism took off from there. He was recently honored by the ACLU of Iowa.

The demonstrations in Sioux City were less intense than those in some cities, but hundreds turned out and marched on multiple occasions, mostly in the downtown area.

For the 2021 program, Mayor Bob Scott will make a special proclamation and West High School's Leeyah Pearson will perform a solo dance. The event will be livestreamed on YouTube. 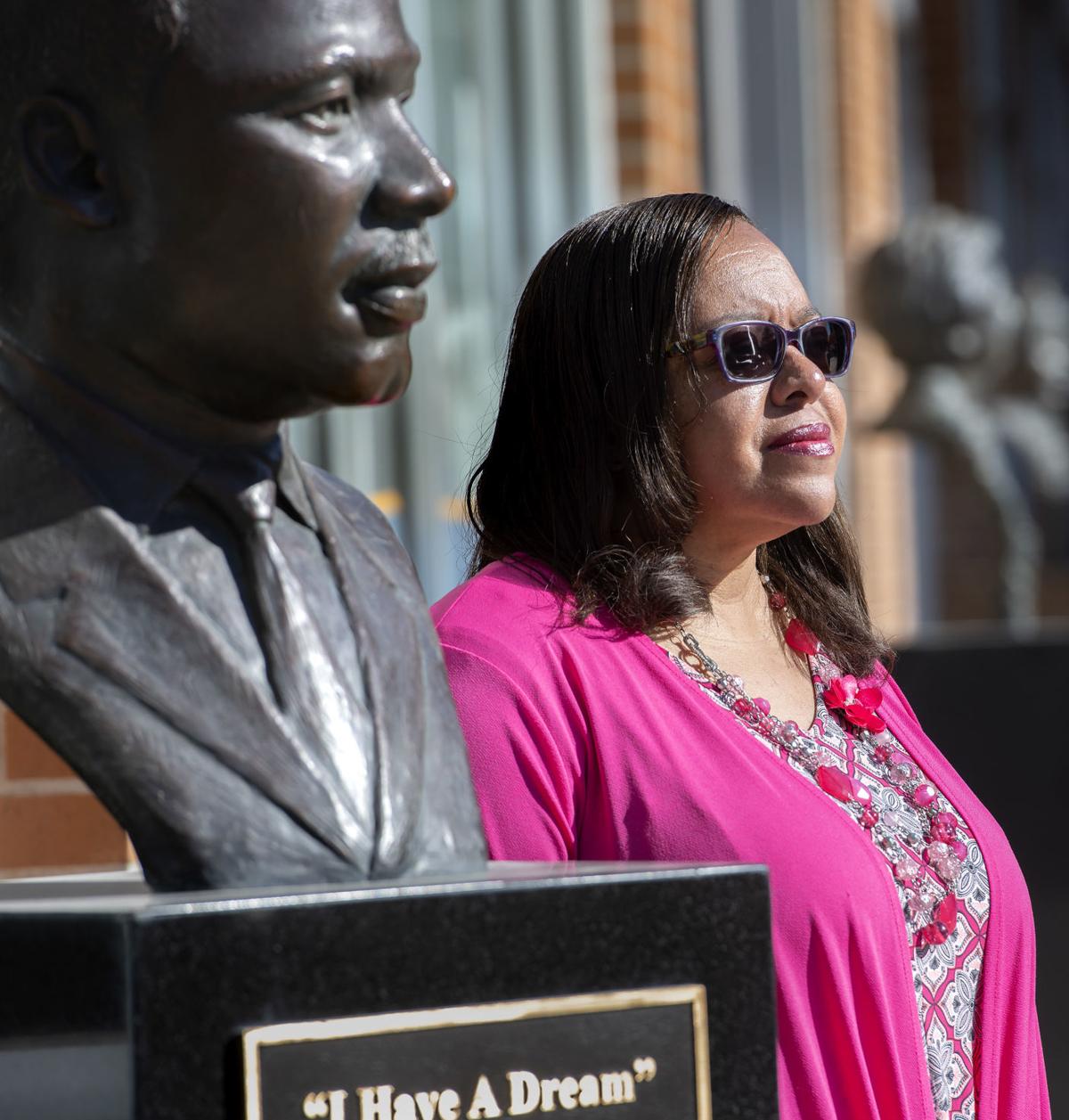 Monique Scarlett, a Sioux City school board member and co-founder of Unity in the Community, stands among the Rudy and Flora Lee Celebrating Community Project busts outside of the Dr. Martin Luther King Jr. Transportation Center in downtown Sioux City. Scarlett is one of many local activists for racial justice and criminal justice reform who is now looking to keep people drawn to the cause in the wake of the protests that arose after George Floyd's death. 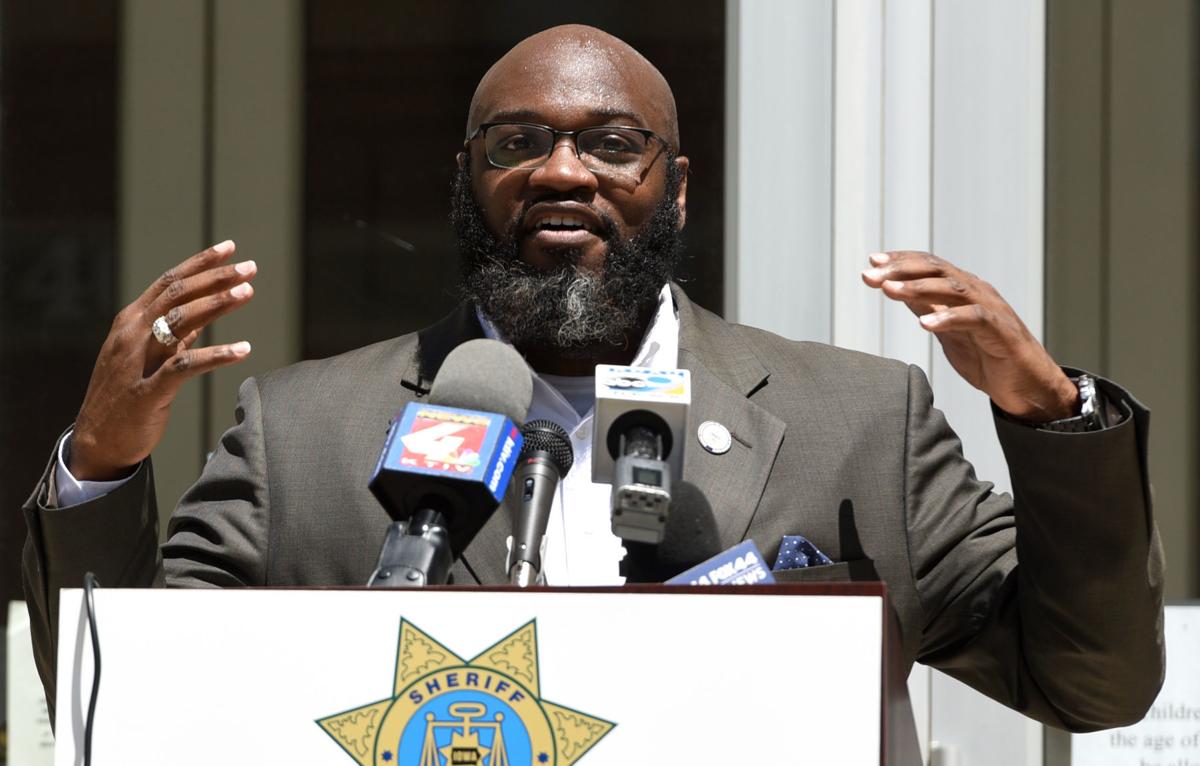 Ike Rayford, president of Sioux City's NAACP chapter, speaks during a community prayer event outside the Woodbury County Law Enforcement Center on June 4. Rayford says activists seeking racial justice must continue to educate themselves, vote and become involved in the cause in order to achieve the changes demanded since the death of George Floyd.