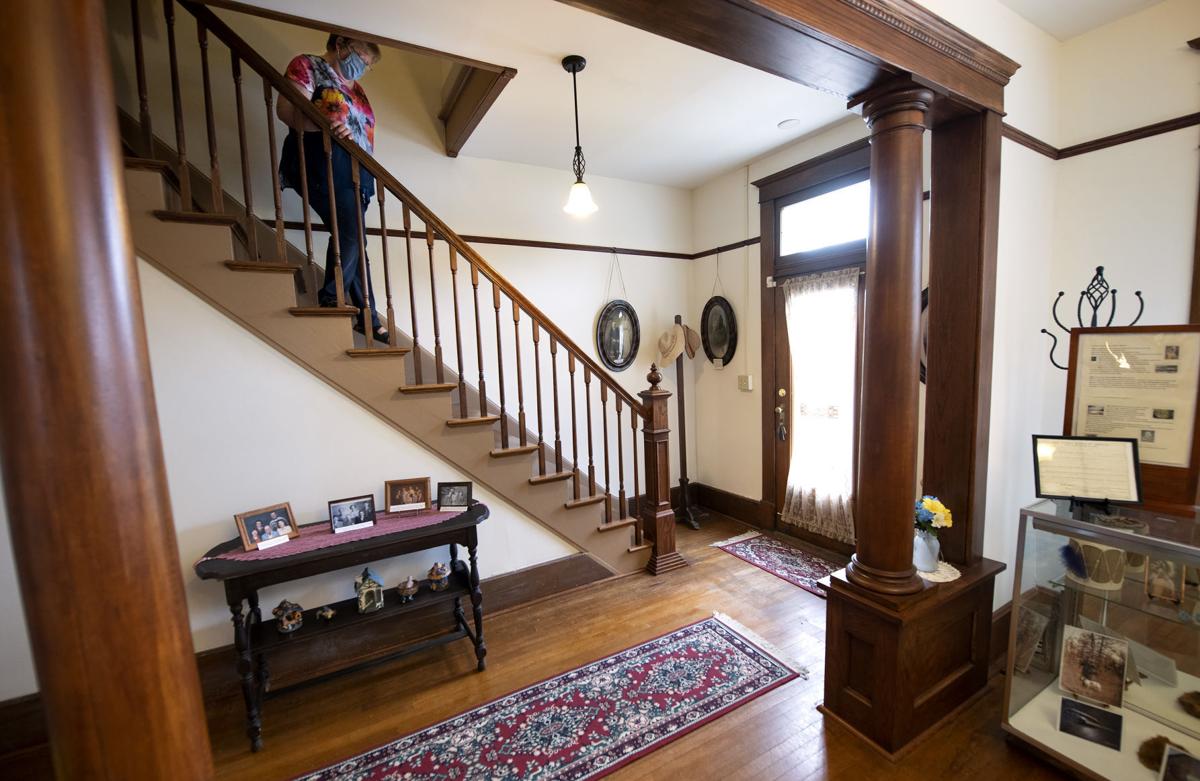 Jane Judt, president of the Decatur Museum's board of directors, walks downstairs from the second floor of the A.B. Fuller House in Decatur, Neb. The restored house, built in 1875 and home to the museum since 2006, was listed on the National Register of Historic Places in July. 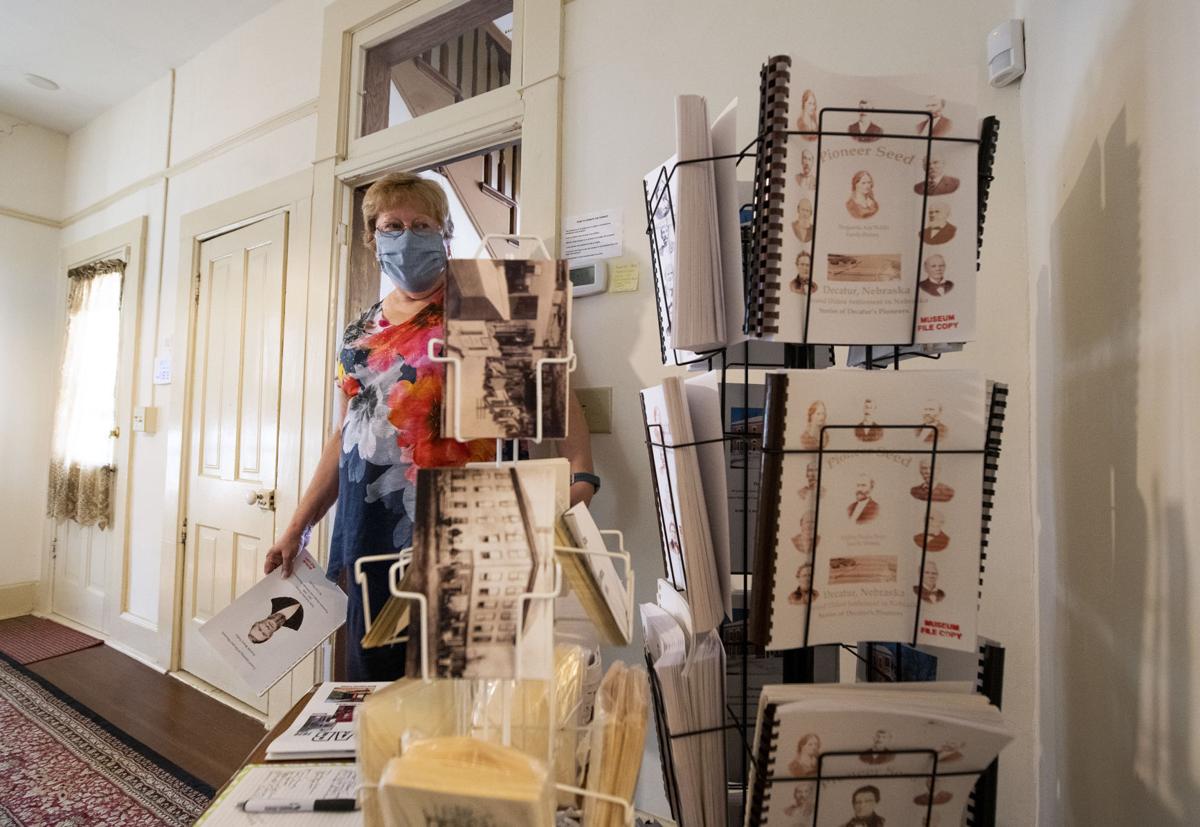 Jane Judt, president of the Decatur Museum's board of directors, shows a display of books that tell the histories of the town's founding families. The museum is located inside the A.B. Fuller House, which was listed on the National Register of Historic Places in July.

DECATUR, Neb. -- Sometimes it takes an outsider's view to really appreciate what you have.

That's not to say members of the Decatur Museum's board of directors didn't already appreciate the A.B. Fuller House, which houses the museum. They'd spent thousands of dollars and volunteer hours to restore the oldest house in town, built in 1875 by one of Decatur's earliest movers and shakers.

"We were enjoying it, keeping it open and having presentations about history," museum board president Jane Judt said.

Judt and other board members knew the Fuller House's place in Decatur's history. When David Calease, of History Nebraska's State Historic Preservation Office, found out about it, he encouraged the museum board to pursue getting it added to the National Register of Historic Places.

After hours spent compiling records, taking photos and gathering details prior to filing the final draft of the application in May, Judt learned in July that the Fuller House had been named to the National Register.

"I was elated," Judt said. "It means a lot for Decatur. There are no other buildings in Decatur that are on the register."

That it came to be listed happened by chance.

Calease had called Judt in spring 2019 to talk about the historical significance of Decatur's city hall. During their conversation, Judt mentioned the Fuller House, and Calease's interest was piqued. When he came to the next museum board meeting, he took a look at the house.

The next day, he emailed her an application for the Historic Register, an honor board members all were familiar with but had never considered for their own gem.

"Prior to that, we really hadn't thought about it," said Judt, a 1970 Decatur High School graduate and retired pharmacist who had moved back to Decatur.

It was a lot of work to complete the application, but that was easy when compared with the job the board faced after buying the then-vacant house at 400 W. Eighth St. in 2006 for $8,000. The cupola at the top had been removed decades earlier because of rot. A leaky roof led to plaster damage upstairs. A previous owner in the 1960s had turned the second floor into a separate living unit.

The exterior may have been familiar, but Mr. Fuller himself might have had a hard time recognizing the interior of what was probably one of the town's most extravagant homes when built.

According to history provided by Judt, Azariah Bemis Fuller came to Decatur, one of Nebraska's earliest settlements, in the 1850s, followed by his wife and children a year later. He bought the Brown Hotel, which stood next door to the lot where the house would be built. He built his house in 1875 in the Italianate style, which Calease said was typical for prominent and successful politicians and business people at that time.

The same year he built his home, the hotel burned down. In addition to the hotel business, Fuller operated a sawmill on the Iowa side of the Missouri River and dabbled in a mining company. He also built one of the town's earliest school buildings.

Fuller died in 1898, inside the house, Judt believes.

The house was passed down to family members and then went through a series of owners. Judt said no Fuller relatives remain in the area.

During planning for events to mark the bicentennial of the Lewis and Clark expedition through the area in 2003, committee members set a long-term goal of establishing a museum. One of the committee members knew the Fuller House's owner, they began talking, and, wouldn't you know it, Decatur soon had a home for its first museum.

With just a single photo of the house's exterior to guide the restoration, the museum volunteers went to work. Old outlines on the floor showed where walls had previously been, and old newspaper stories detailed improvements over the years. They looked at other old houses to get an idea how the interior would have appeared.

All the while, local residents began donating historical items to fill the museum, which opened on the first floor in 2008. The second floor opened in 2010.

It's been a slow summer for the museum, which has been open only by appointment because of the COVID-19 pandemic. With the new historical designation in place, the museum will get some additional exposure.

"We hope once the pandemic is resolved that it will encourage more visitors to come," Judt said.

Though 145 years old, the house is still a sight to see. Bricks, all made in a Decatur kiln, remain neat and clean. Many of the original windows are still intact. The columns and second-floor sun porch give the house a stately air.

"The citizens of Decatur are proud of the place," Judt said.

As they should be.

With a revised schedule, fewer big events and measures to spread out the crowd to encourage social distancing, organizers decided to move ahead with the annual event. "We knew we were going to have some type of fair," manager Lisa Bousquet said.

Jane Judt, president of the Decatur Museum's board of directors, walks downstairs from the second floor of the A.B. Fuller House in Decatur, Neb. The restored house, built in 1875 and home to the museum since 2006, was listed on the National Register of Historic Places in July. 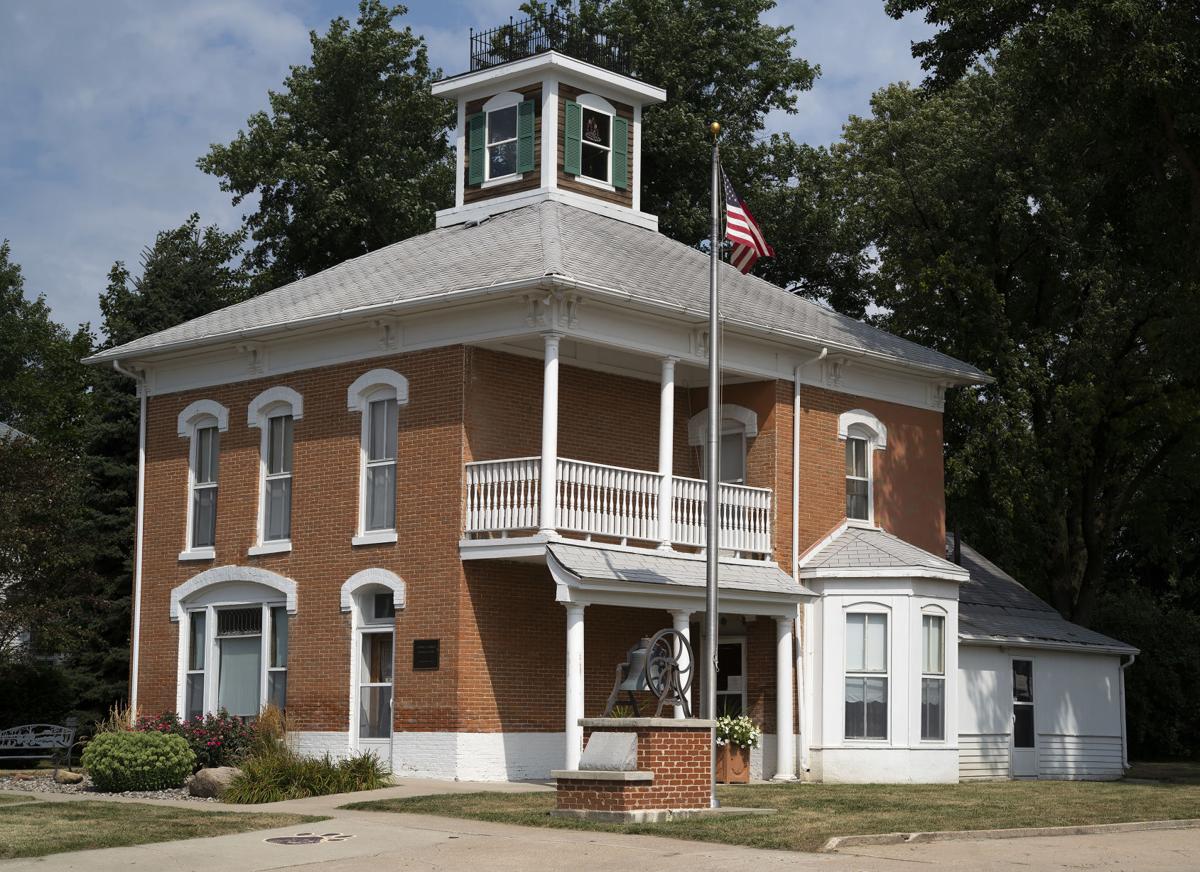 The A.B. Fuller House in Decatur, Neb., was added to the National Register of Historic Places in July. Home to the Decatur Museum, the house was built in 1875 by A.B. Fuller, a prominent citizen early in the town's history. 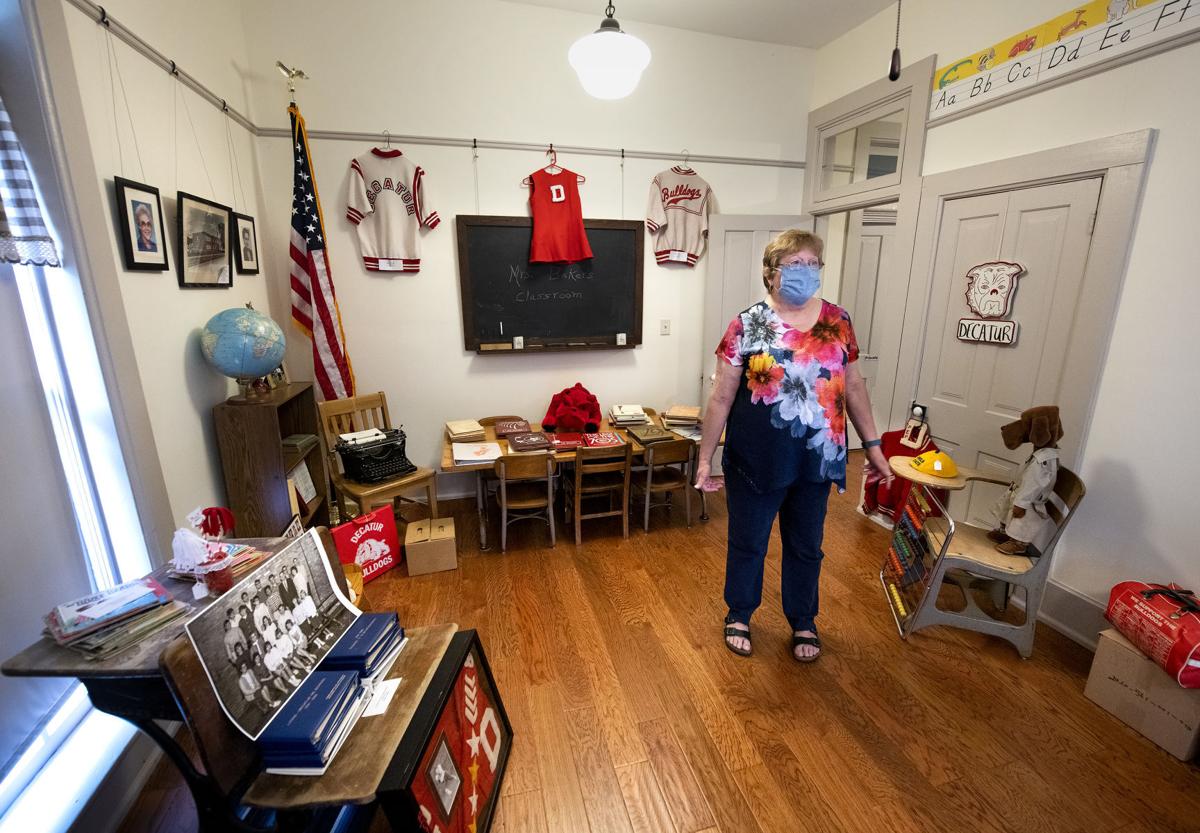 Jane Judt, president of the Decatur Museum's board of directors, stands in a room decorated as a classroom and named in honor of Decatur, Neb., teacher Saranne Baker. The display is inside the A.B. Fuller House, built in 1875 and added to the National Register of Historic Places in July. 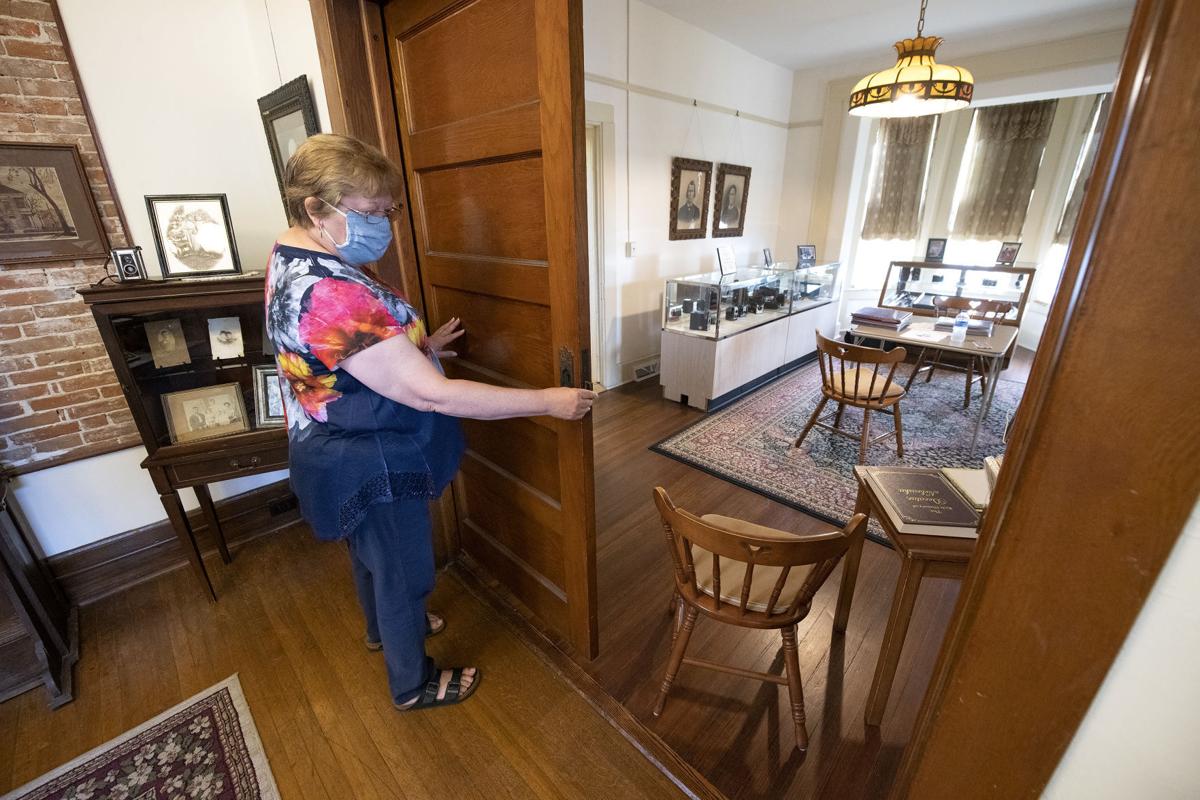 Jane Judt, president of the Decatur Museum's board of directors, slides open a pocket door inside the historic A.B. Fuller House in Decatur, Neb. Home to the museum, the house, built in 1875, was listed on the National Register of Historic Places in July.

Jane Judt, president of the Decatur Museum's board of directors, shows a display of books that tell the histories of the town's founding families. The museum is located inside the A.B. Fuller House, which was listed on the National Register of Historic Places in July.