VERMILLION, S.D. -- It's funny, years later, the stories we share about college days spent subsisting on ramen noodles and peanut butter and jelly sandwiches because we couldn't afford anything else.

The image of the suffering college student has become somewhat romanticized, a rite of passage young people go through on the way to earning a degree, a job and, hopefully, a full cupboard and refrigerator.

"People say it's just natural for students to struggle while in college. College is stressful enough, let's make it a little easier," the University of South Dakota junior said.

The president of USD's Student Government Association decided last year that students shouldn't be hungry or face food insecurity, having to decide between buying food or paying their rent or tuition.

A conversation with a friend who told him that it was tough to have enough to eat during long weekends or holiday breaks when campus dining facilities weren't open made Zubke think.

"I thought to myself, that's someone I've known for three years, I can't imagine how many other students are facing this," the health services and accounting major said.

"It's a great opportunity for us to work together in the community and campus," Zubke said. "There's been staff on campus that wanted to do this for a few years now. It's always been a question of whether there was a need for it."

Add in the fact that one-third of incoming USD students are from low-income or first-generation backgrounds, and it's likely there are a lot of students who could use the help. New students facing problems might not be familiar with Vermillion and know what services are available. Charlie's Cupboard can be a gateway to help. 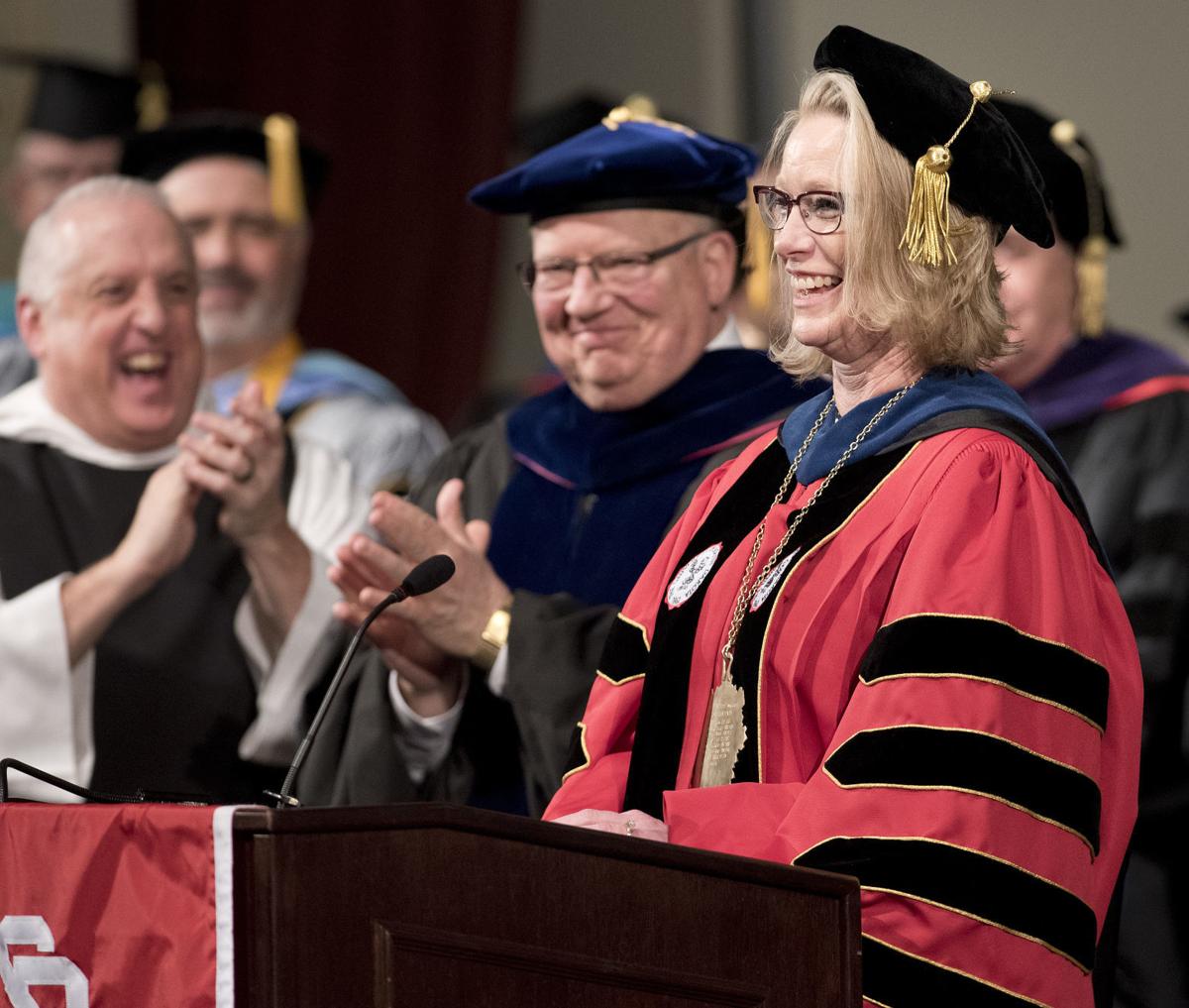 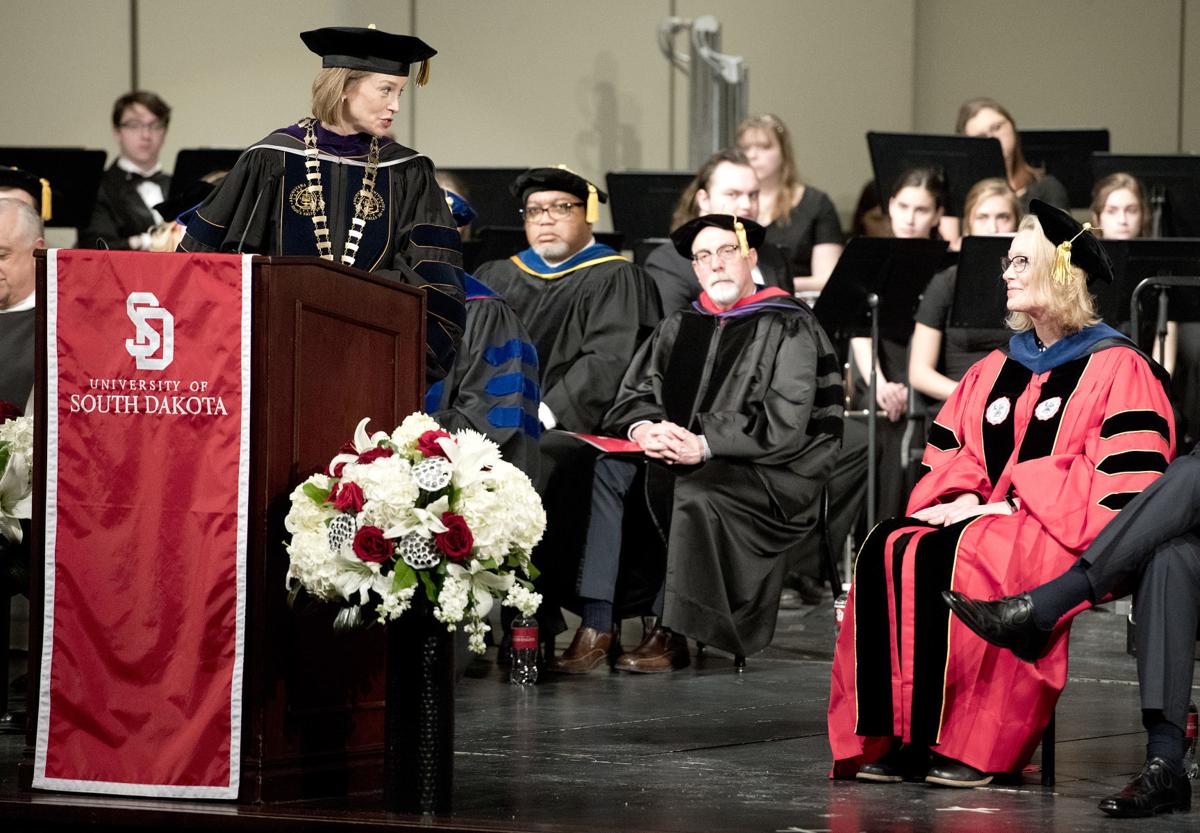 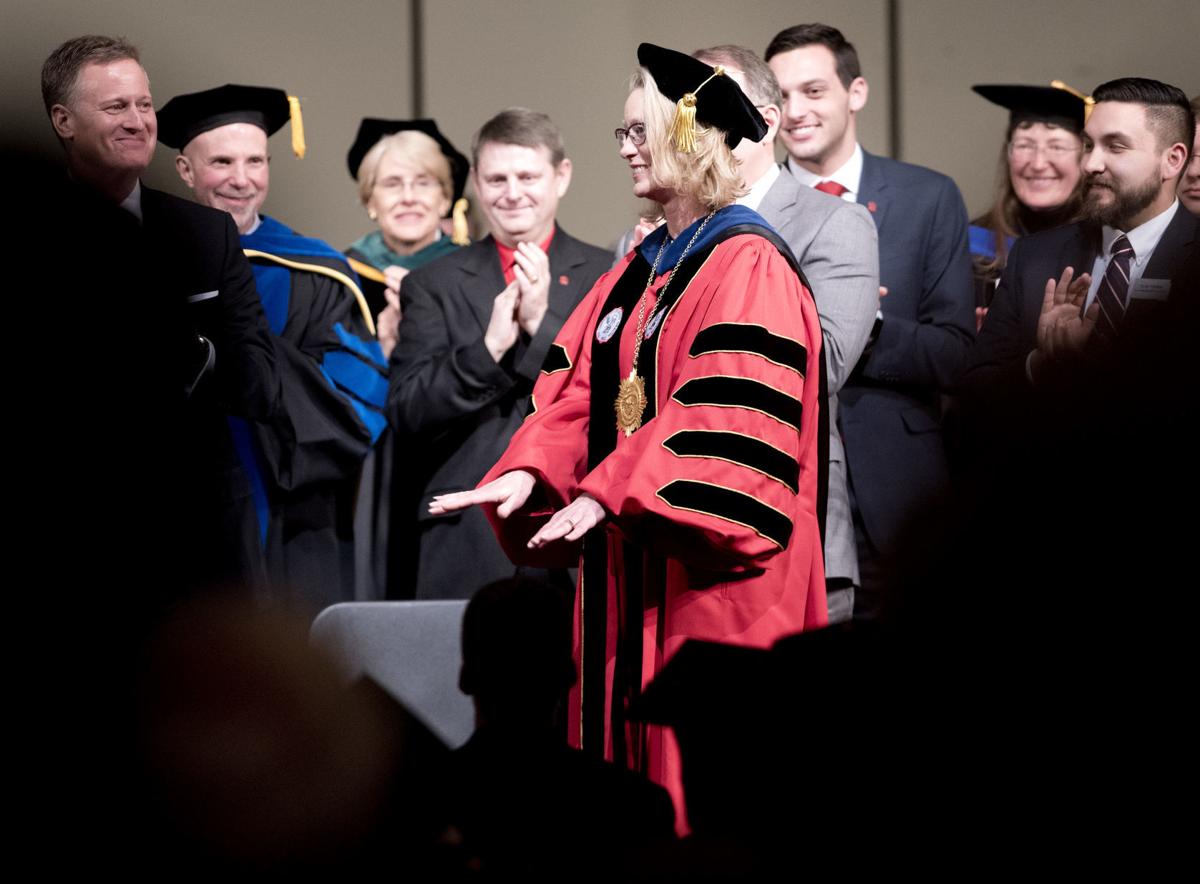 Sheila K. Gestring motions for people to sit down while receiving a standing ovation during her presidential inauguration ceremony Wednesday, Feb. 13, 2019, in Aalfs Auditorium on the University of South Dakota campus in Vermillion. Gestring is the university's 18th president, taking office in June 2018, after serving as the school's chief financial officer. Sioux City Journal photo by Tim Hynds 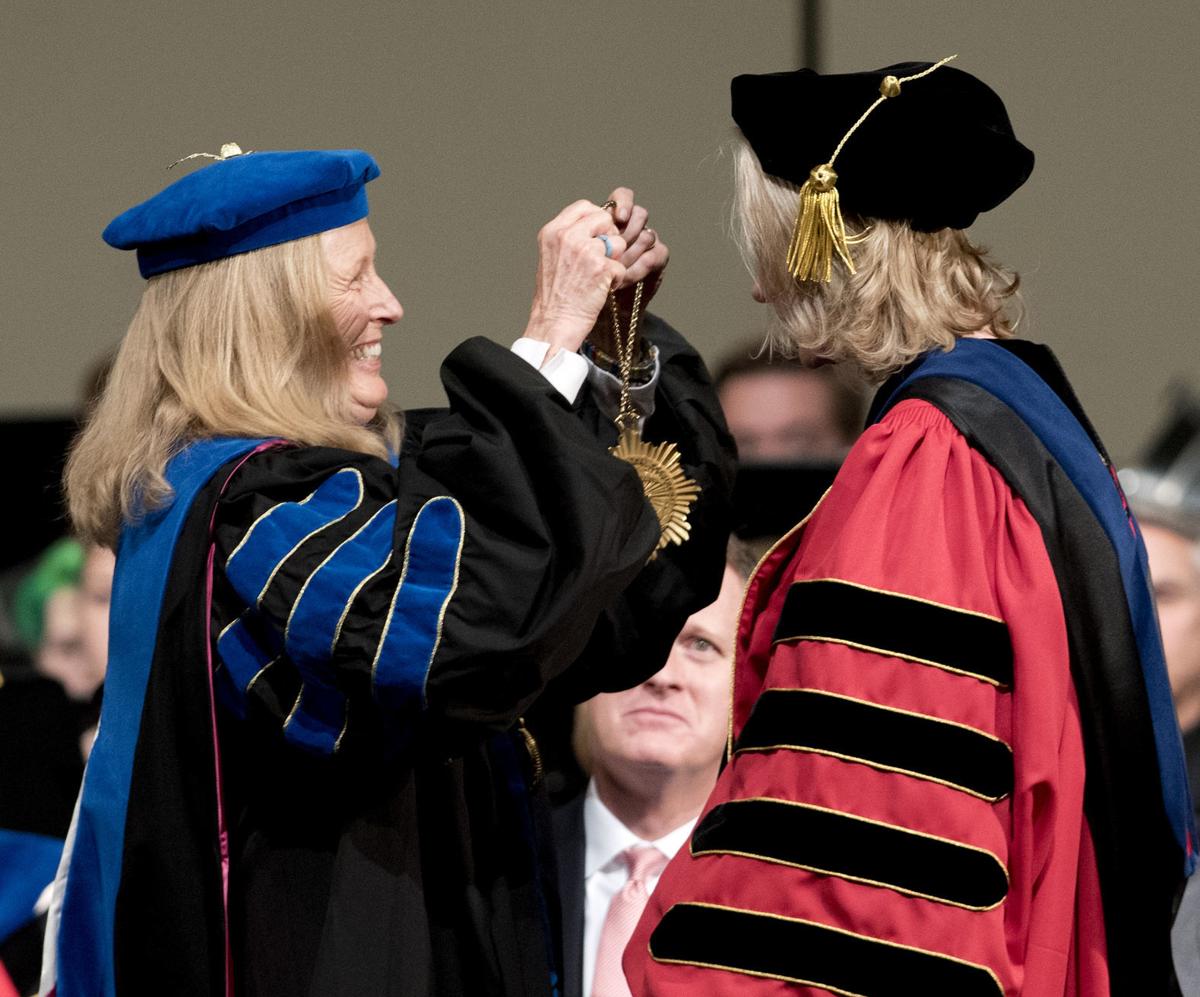 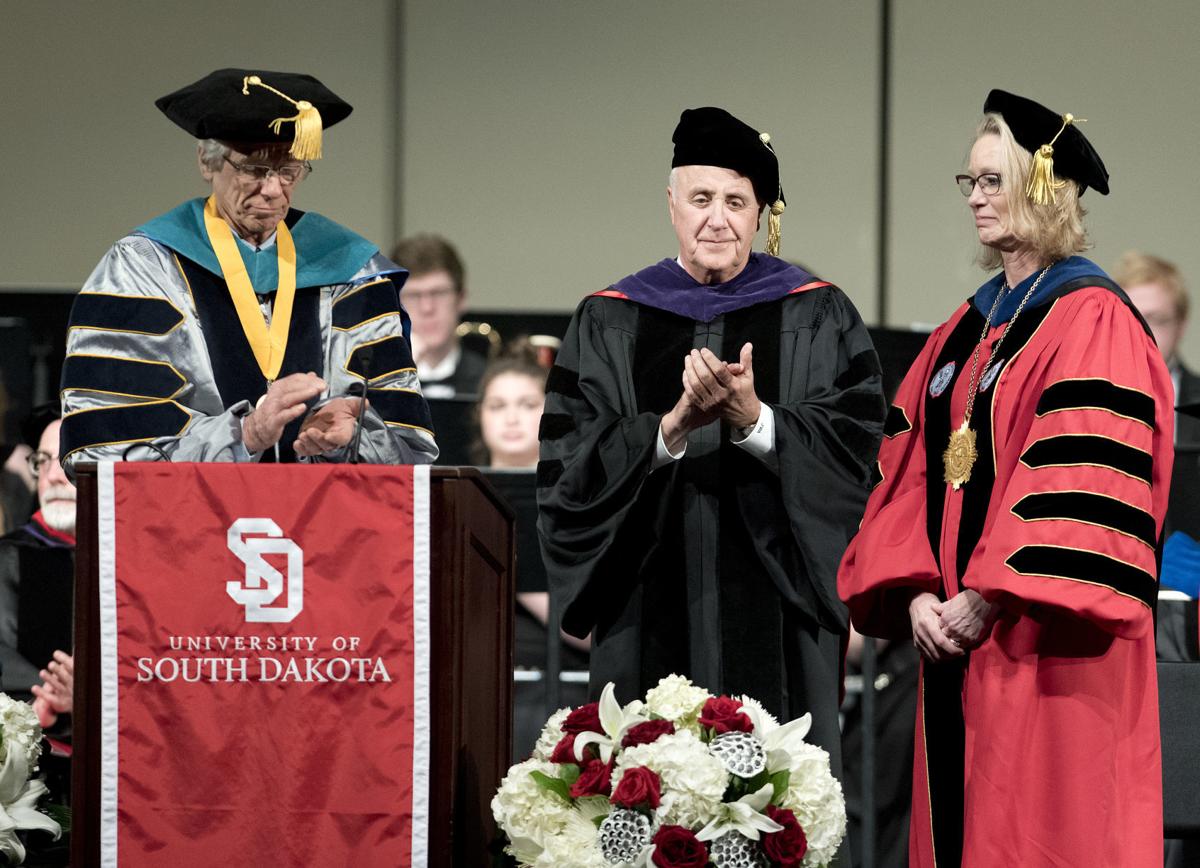 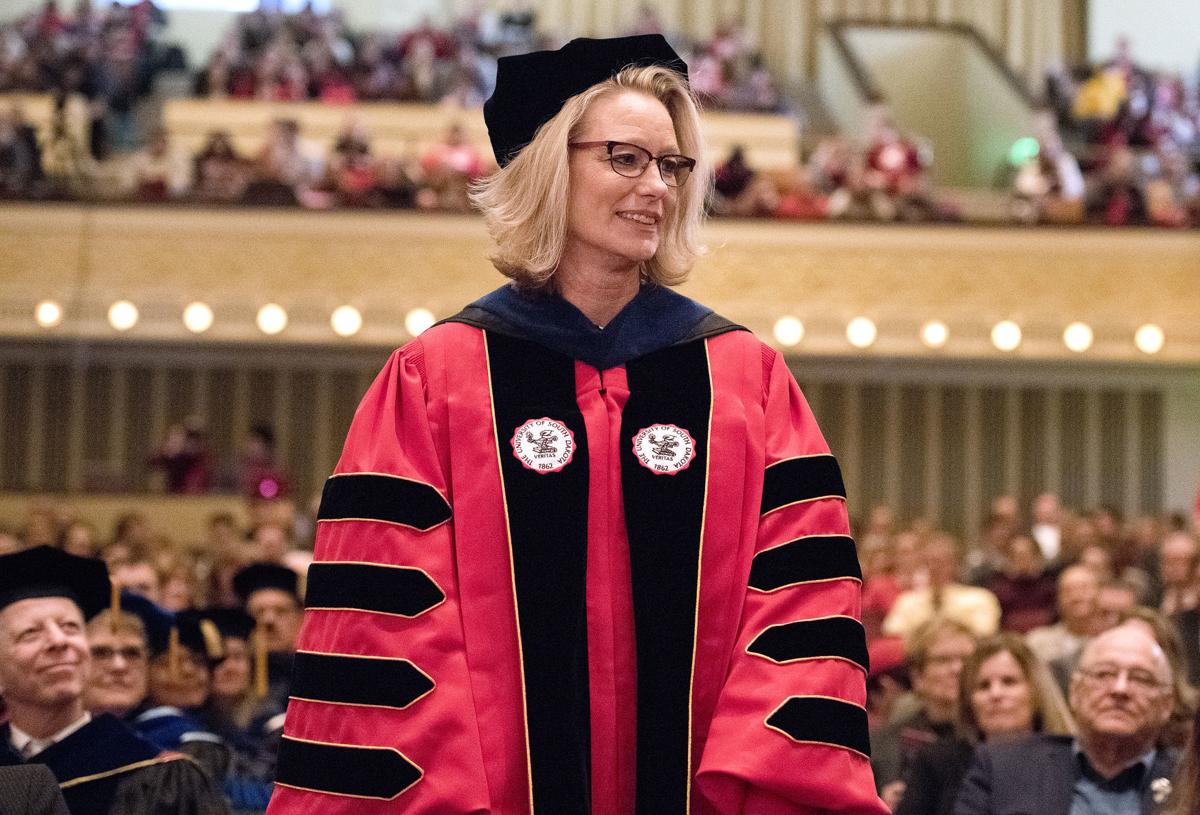 Sheila K. Gestring smiles as she walks towards the stage during her presidential inauguration ceremony Feb. 13, 2019, in Aalfs Auditorium on the University of South Dakota campus in Vermillion. Gestring is the university's 18th president, taking office in June 2018, after serving as the school's chief financial officer. 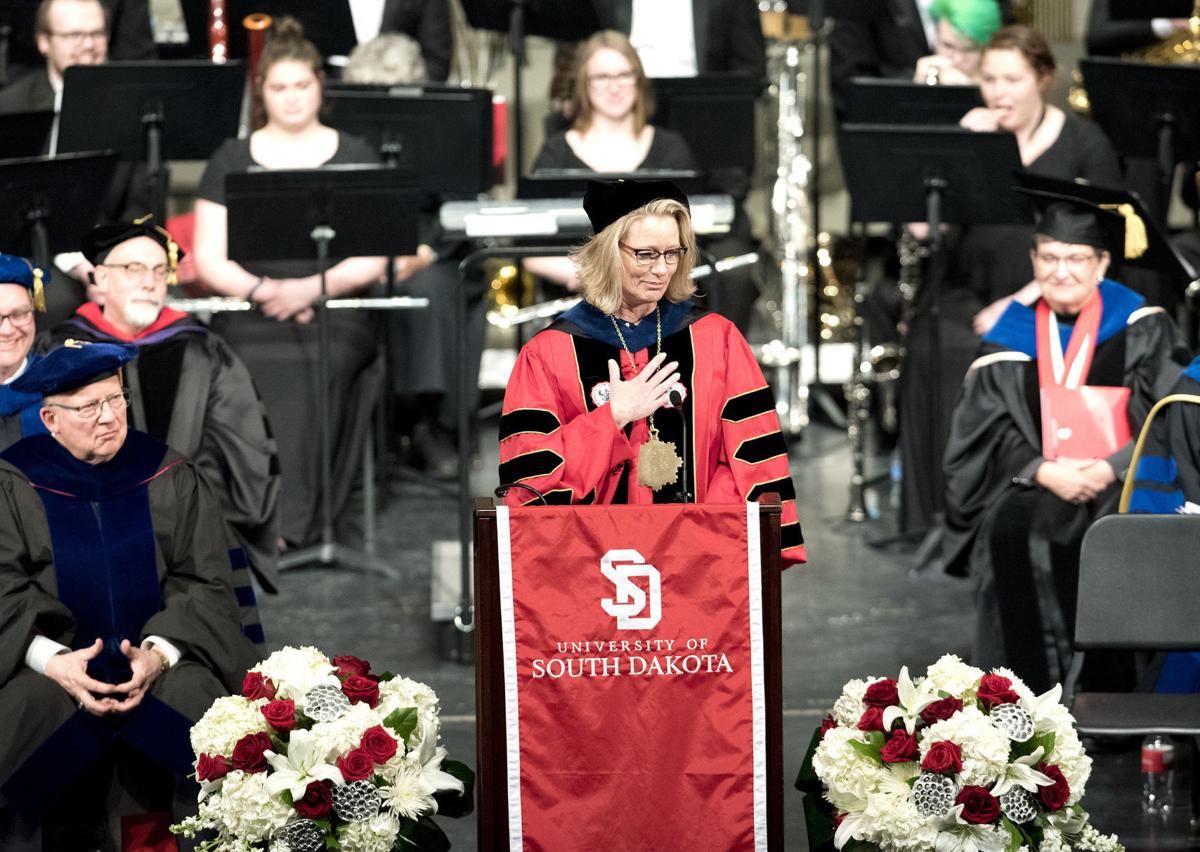 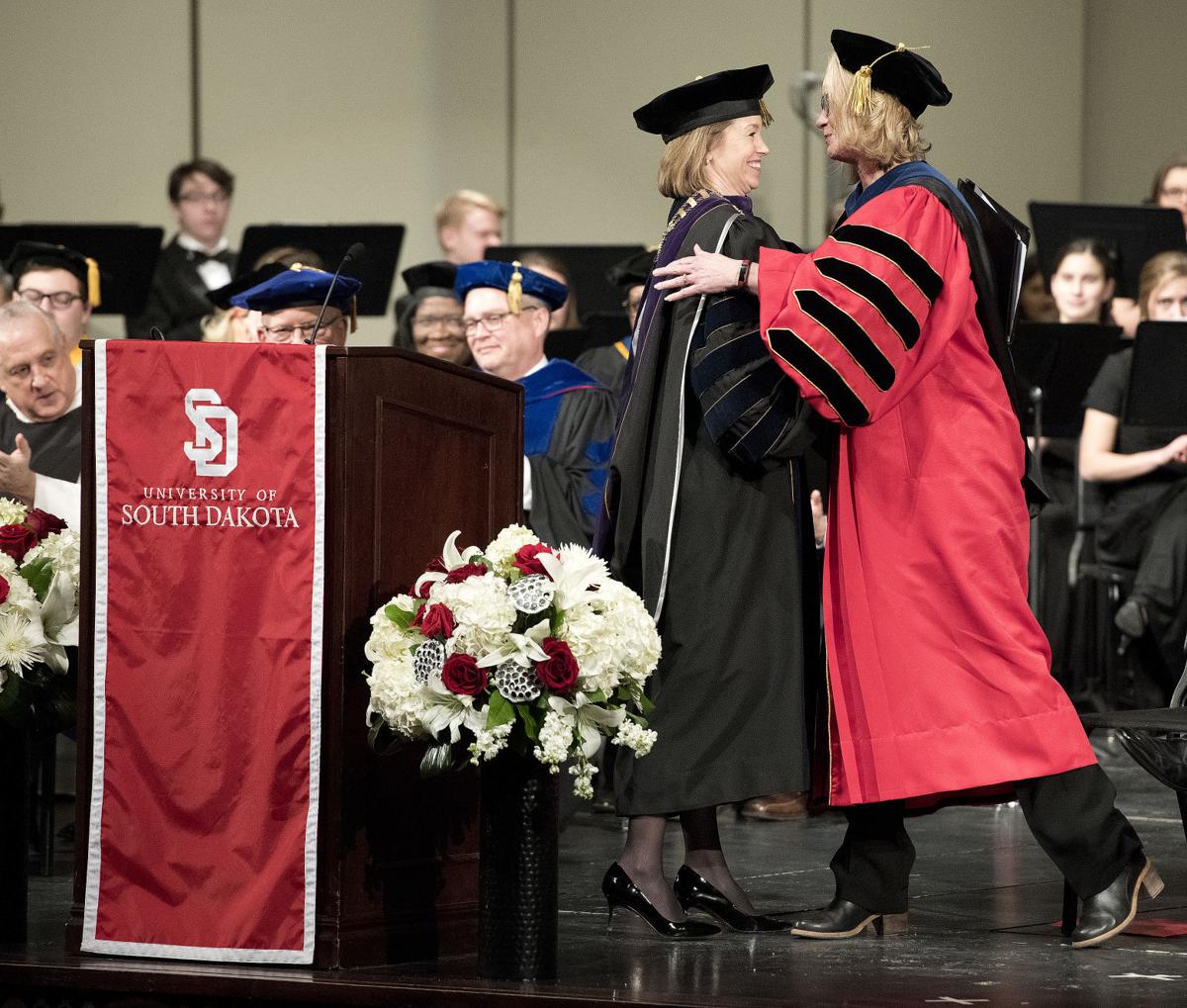 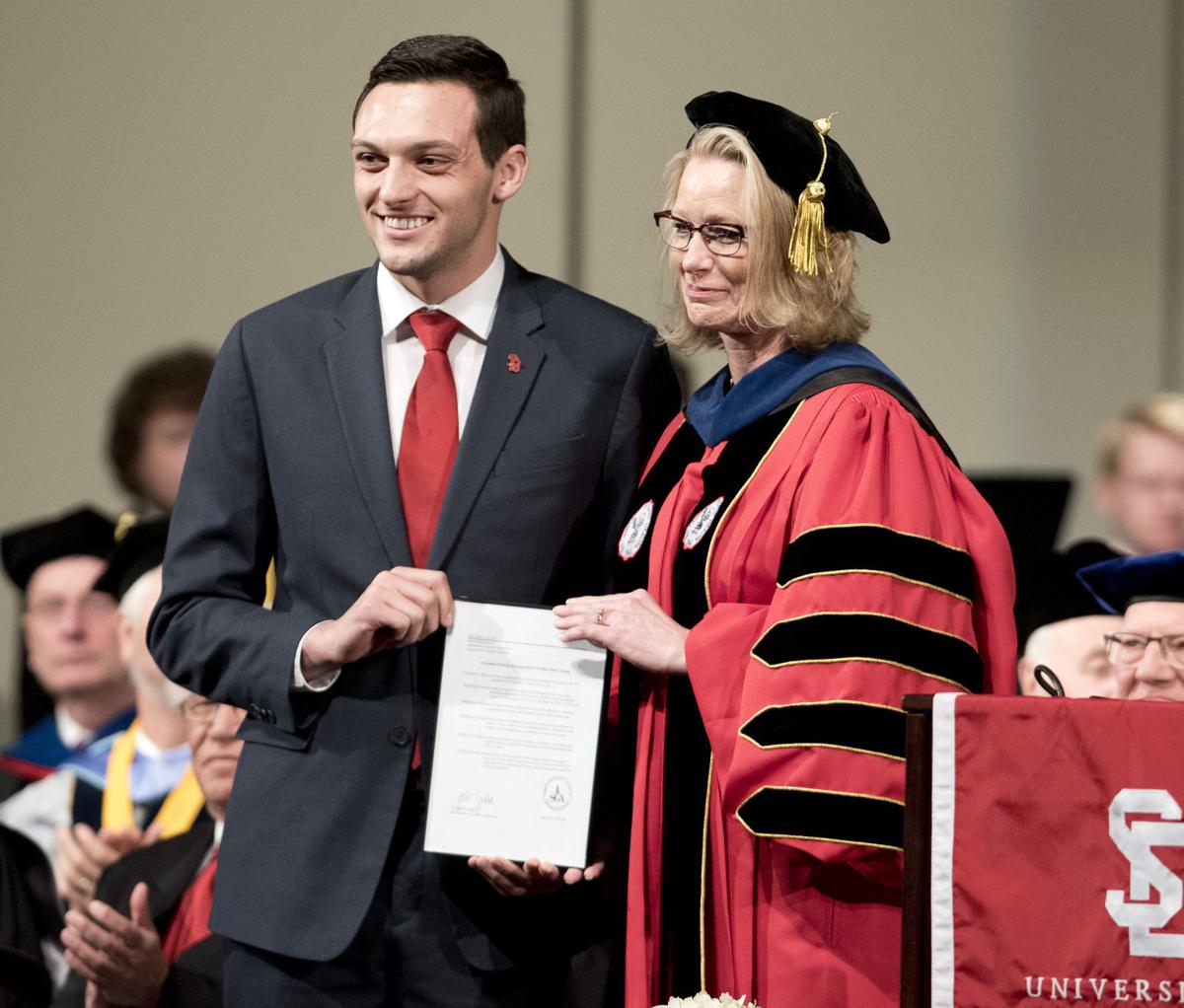 In his research, Zubke, a Waubay, South Dakota, native, said many other college campuses have started food pantries. USD administrators, he said, were immediately receptive to the idea, and President Sheila Gestring was committed to see the idea come to fruition.

The idea caught on with students and alumni. Last week during Unite for USD, an annual online fundraising event for campus initiatives, Charlie's Cupboard surpassed 250 individual donations, a benchmark that unlocked a $10,000 pledge to the organization. Overall, more than 300 donors gave nearly $21,000 to Charlie's Cupboard during the fundraising campaign.

"That's been really humbling to see how many people support it," Zubke said.

Zubke hopes that Charlie's Cupboard will help remove any stigma students may feel about accepting food. Organizers purposely left out the term "food pantry" in the name, instead choosing to name it after USD's mascot Charlie the coyote. Including "cupboard" in the name reminds one of a kitchen, of home, Zubke said.

Between now and next fall, when Charlie's Cupboard will open in the Center for Continuing Education, Zubke and others will complete a budget, food partnerships and marketing. Their goal is to be financially self-sustaining within three years. Zubke hopes it's running long after he has graduated.

"I see this as an opportunity to give back to a place that's done a lot for me," he said. "Giving today to help people tomorrow is the way I look at it."

Those students someday will be able tell fun stories of their USD days that don't include scrimping while finding something to eat.

With no walls or furnishings, the building currently resembles a 5,000-square-foot warehouse inside rather than a future educational center that will tell the tale of U.S. military conflicts and members of all branches of service who have served.

Patients suffering from methamphetamine overdoses often exhibit frantic behavior, and users can develop long-term physical and psychological issues. An overdose on meth, one researcher said, isn't as simple as a more-common opioid one.

Both roles, Edgar Rodriguez said, are all about helping people: He might do it at church, or a congregant's home, or from the driver's seat of his police SUV.

Residents no doubt will remember the flood and how it affected their families. Perhaps a more lasting legacy of the event, however, is how the town, along with hundreds of volunteers, pulled together to minimize the disruption to residents' lives. 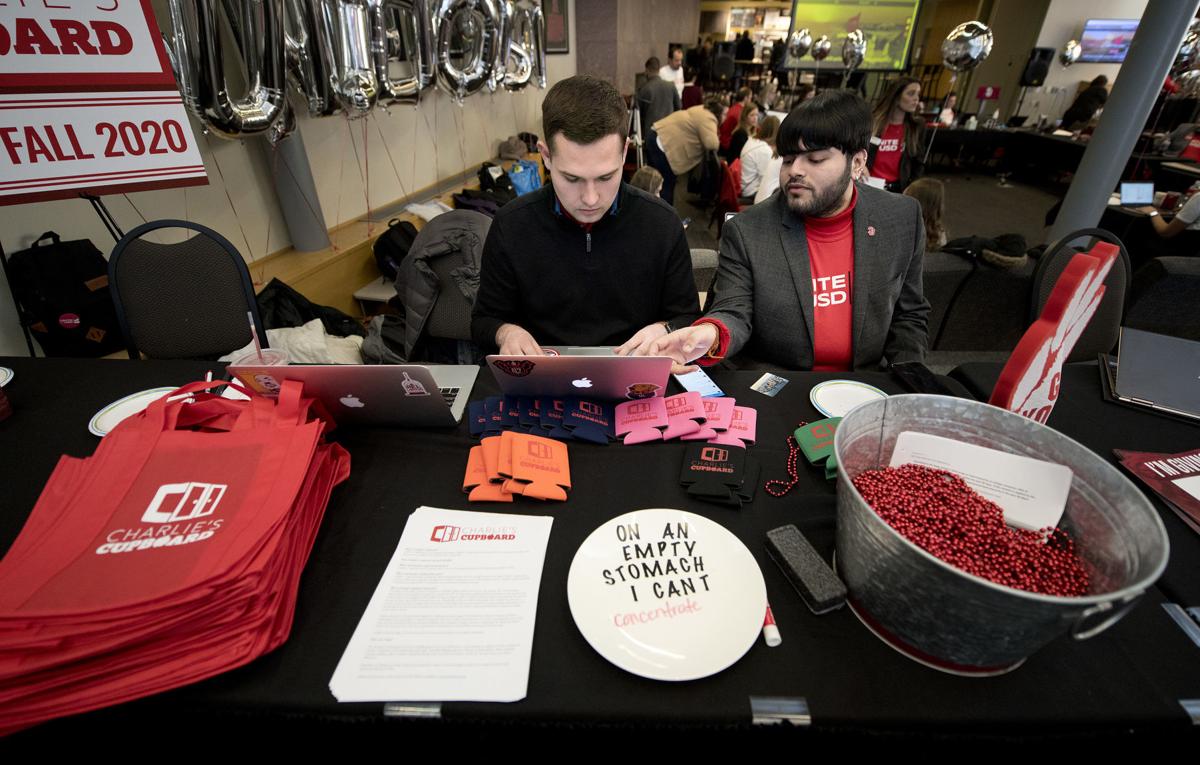 Carson Zubke, president of the University of South Dakota's Student Government Association, left, and student senate member Naivetya Patle work at a booth Thursday to get donations for Charlie's Cupboard, an on-campus food pantry that will open for students in the fall. Charlie's Cupboard will furnish dry, nonperishable items initially and potentially offer produce and meat in the future. 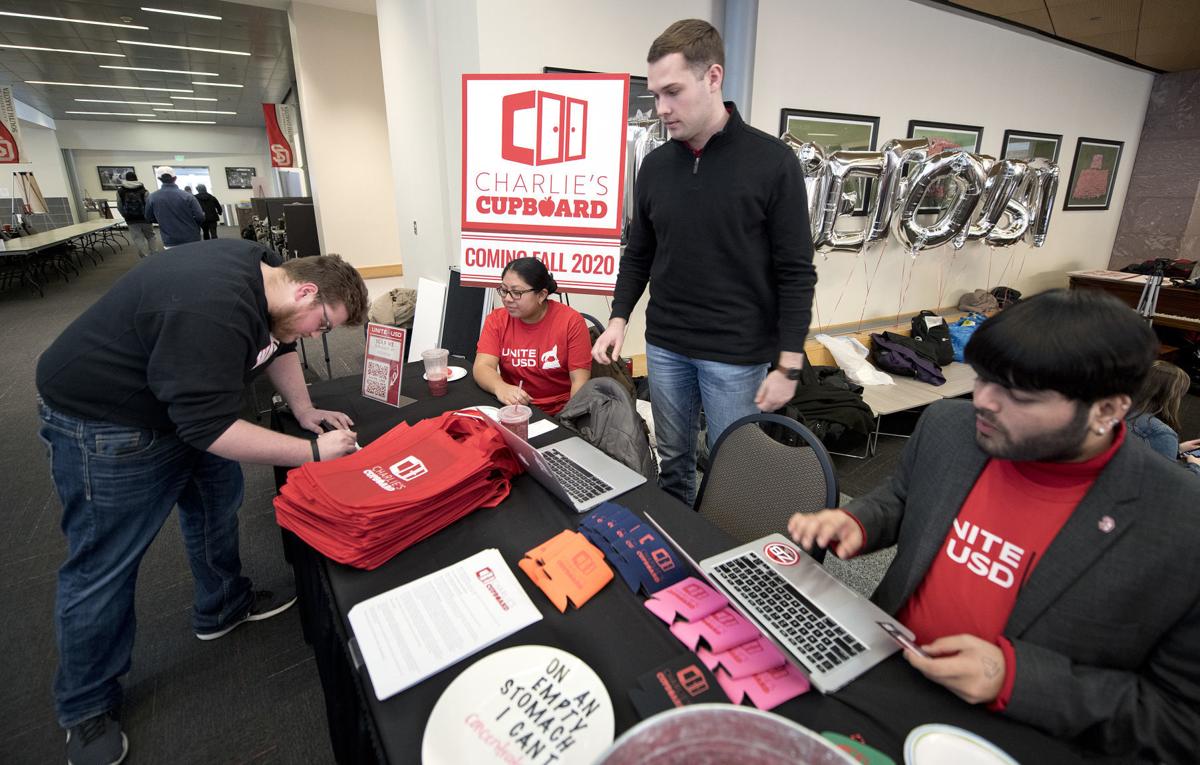 Carson Zubke, president of the University of South Dakota's Student Government Association, standing, looks on as freshman student Christian Sage, left, fills out a donation card Thursday at a fundraiser for Charlie's Cupboard, an on-campus food pantry that will open this fall. Seated are student senate members Ingrid Cho and Naivetya Patle, right.