HARTINGTON, Neb. -- When they agreed to be the subjects of a television show, Erin and Ben Schroeder wanted viewers to get a realistic look at their lives as small-town veterinarians.

They wanted viewers to see the dirt, the blood and the manure and that not every case has a happy ending.

"We wanted things to be authentic and real," Erin Schroeder said.

The husband-and-wife veterinarian team from Hartington will bring more of that reality to TV on May 30, when season two of their show, "Heartland Docs, DVM," premieres on the Nat Geo Wild channel.

This season will show a few more family moments with Ben, Erin and their teenage sons, Charlie and Chase, but viewers still will get plenty of time following the vets as they care for animals brought in to their Cedar County Veterinary Services clinic or on the farms that surround Hartington. None of the cases are staged, Ben said.

"Everything we shot, we can say we really did this," he said. "The best stories have been legitimate emergencies."

Those familiar with the show have watched Erin tear up during difficult cases in which an animal isn't going to survive. It's not an act.

"The emotions are so real. It kind of tugs at your heartstrings," Erin said, adding that tears still well up in her eyes when rewatching those season-one scenes.

That realism and emotion is reflected by the pet owners and farmers who call on the Schroeders, who hope the show portrays a way of life viewers from big cities can appreciate.

"This is really just sharing a slice of life from rural America," Erin said. "We hope to tell these beautiful stories about the Midwest."

The message seems to be resonating, at least a little.

During a trip to New York City to promote the show, Ben said a hotel bellhop studied him closely when they checked in.

"Later that night he said, 'I love your show,'" Ben said. It was cool to be recognized from the show, he said, but even cooler knowing that someone living in the nation's biggest city enjoyed watching a show about vets in rural Nebraska.

Back home in Hartington, it's business as usual, though the Schroeders do get approached at basketball games by kids who want to have their picture taken with them. The couple, who gained notoriety for restoring a couple of historic buildings in town, are community members, parents and coaches like everyone else. They just have an eight-member TV crew following them around some of the time.

A newspaper story about their restoration work a couple years ago caught the eyes of television producers, who began calling to gauge their interest in starring in their own show.

"I hung up on the first couple. I thought I was being scammed," Erin said.

Glass Entertainment, which produces other home remodeling shows and "The Vet Life" on Animal Planet, convinced them their interest was legitimate. Nat Geo Wild was interested in their story, and just before Christmas 2018, the Schroeders were told the show was a go.

They shot season one last year from March to June. Before season one ever aired, the channel signed on for a second season, and filming ran from August through March. The fall and winter filming will allow viewers to follow cases different from those seen in the spring and summer months of season one.

The 12-hour days of shooting can be grueling, Ben said, but seeing the end result is fun for them and their clients, many of whom have been good sports about being interviewed on camera or entering and leaving the clinic 10 times so the film crew can get a desired angle.

If a client doesn't want to be filmed, he or she isn't. The Schroeders, often with help from Charlie and Chase, treat livestock, cats and dogs, exotic animals and wildlife, so there is no shortage of material.

"They're only shooting a small portion of what we're seeing," Erin said.

When they took over Ben's father's practice a few years ago, Ben and Erin never envisioned this, it just happened. Because the show has been so much fun, they're willing to run with it as long as the producers and viewers are interested.

It might not seem so for them at times. But for their viewers, the show is as real as it gets.

Few animals available for adoption at the Siouxland Humane Society

The eight episodes of the show will air at 7 p.m. on Saturdays.

Miss season one or want to rewatch it? The six-episode season will become available on the Disney+ streaming service on May 22.

Have you watched the reality television show “Heartland Docs, DVM”? Visit siouxcityjournal.com/polls to participate in our online poll.

AMC Southern Hills 12 and Promenade Cinema 14 have been shuttered since March 17, the day Gov. Kim Reynolds ordered indoor theaters and a number of other businesses to temporarily close in an attempt to slow spread of COVID-19.

The project shifted into a higher gear this past weekend with a ceremonial ground breaking. Construction is planned to stretch over two years, with a goal for dedication on Veterans Day 2021.

Bishop Heelan's Liz Meyer couldn't have imagined ending high school without a senior prom nor a definitive date for a graduation ceremonies. But, she said: "We all experience challenges in life. We become stronger because of those challenges." 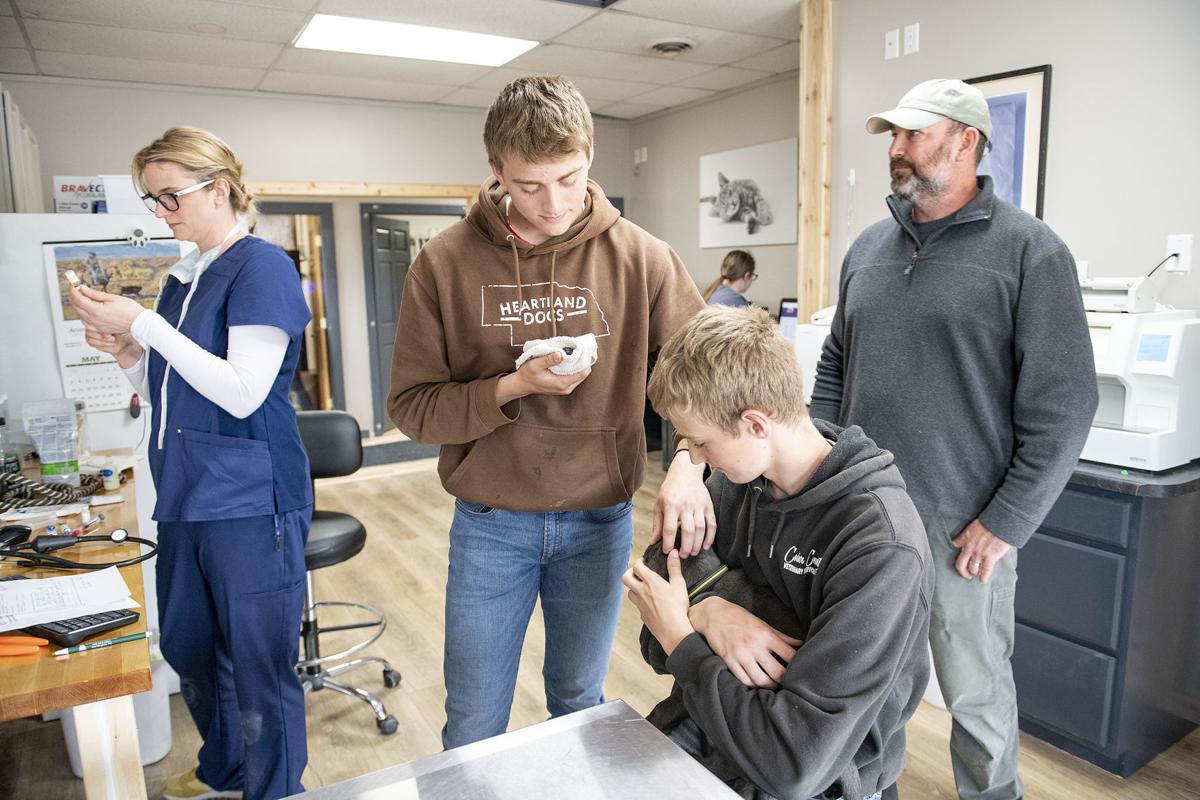 Charlie Schroeder, center, holds a tiny sleeping kitten in one hand while helping his brother, Chase, console a charcoal Labrador puppy named Trip. Charlie and Chase's parents Ben, right, and Erin, left, own Cedar County Veterinary Services in Hartington, Neb., and the family stars in the Nat Geo Wild TV show "Heartland Docs, DVM," which will have its season two premiere on May 30. 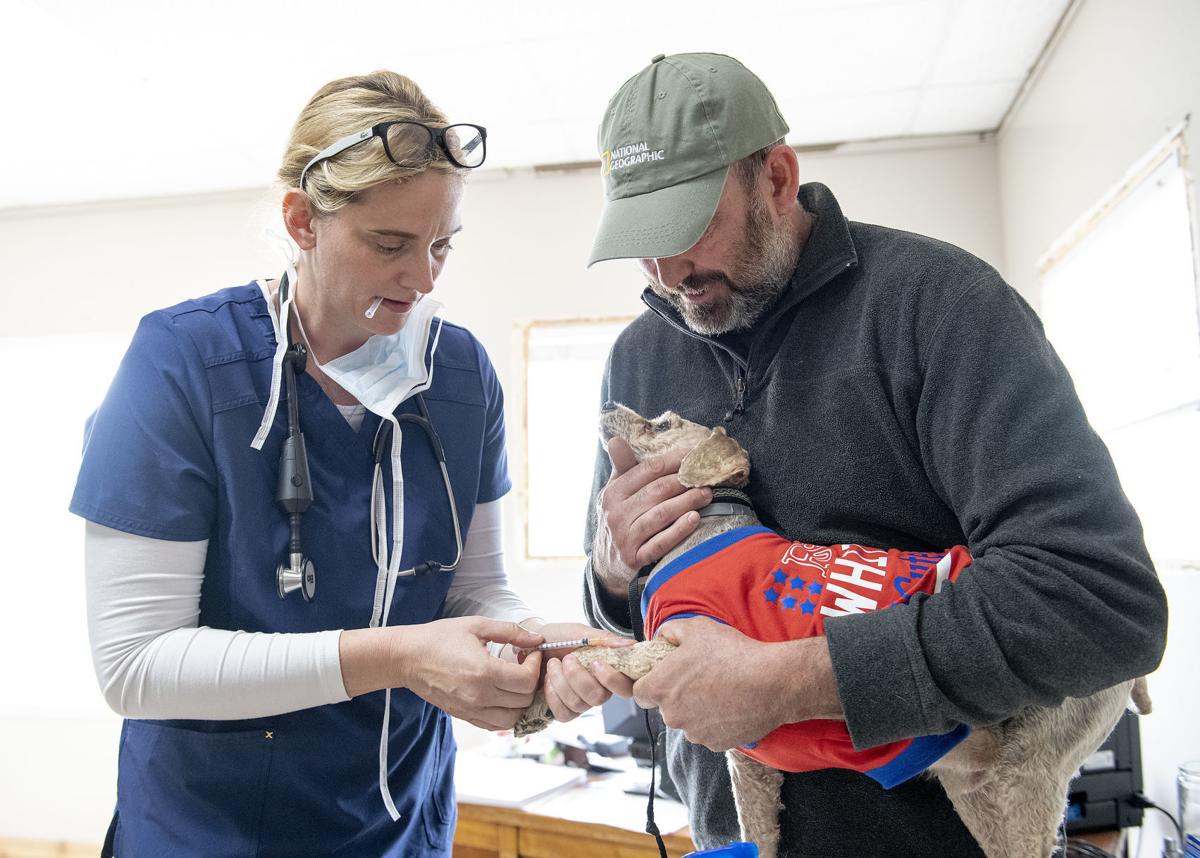 Erin Schroeder performs a blood test for heartworm on a bichon poodle named Charlie while her husband, Ben, assists in their Cedar County Veterinary Services clinic in Hartington, Neb. Fans of their show, "Heartland Docs, DVM," will get to see more of the Schroeders' daily dealings with animals when season two of the show premieres May 30 on the Nat Geo Wild channel. 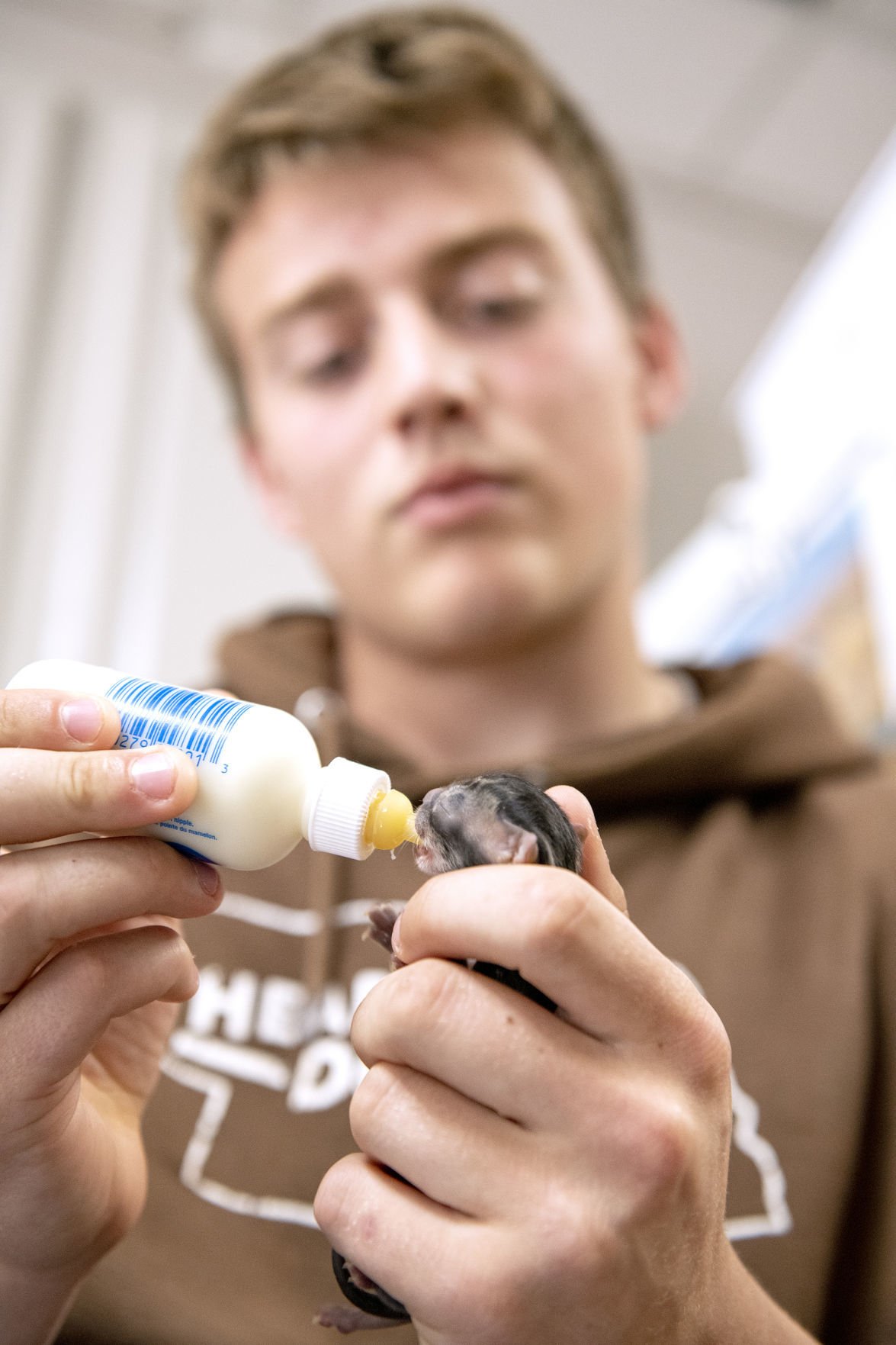 Charlie Schroeder feeds a day-old kitten at his parents' veterinary clinic, Cedar County Veterinary Services in Hartington, Neb. Charlie, his parents, Ben and Erin, and brother, Chase, star in the Nat Geo Wild channel show "Heartland Docs, DVM," which will kick off its second season on May 30. 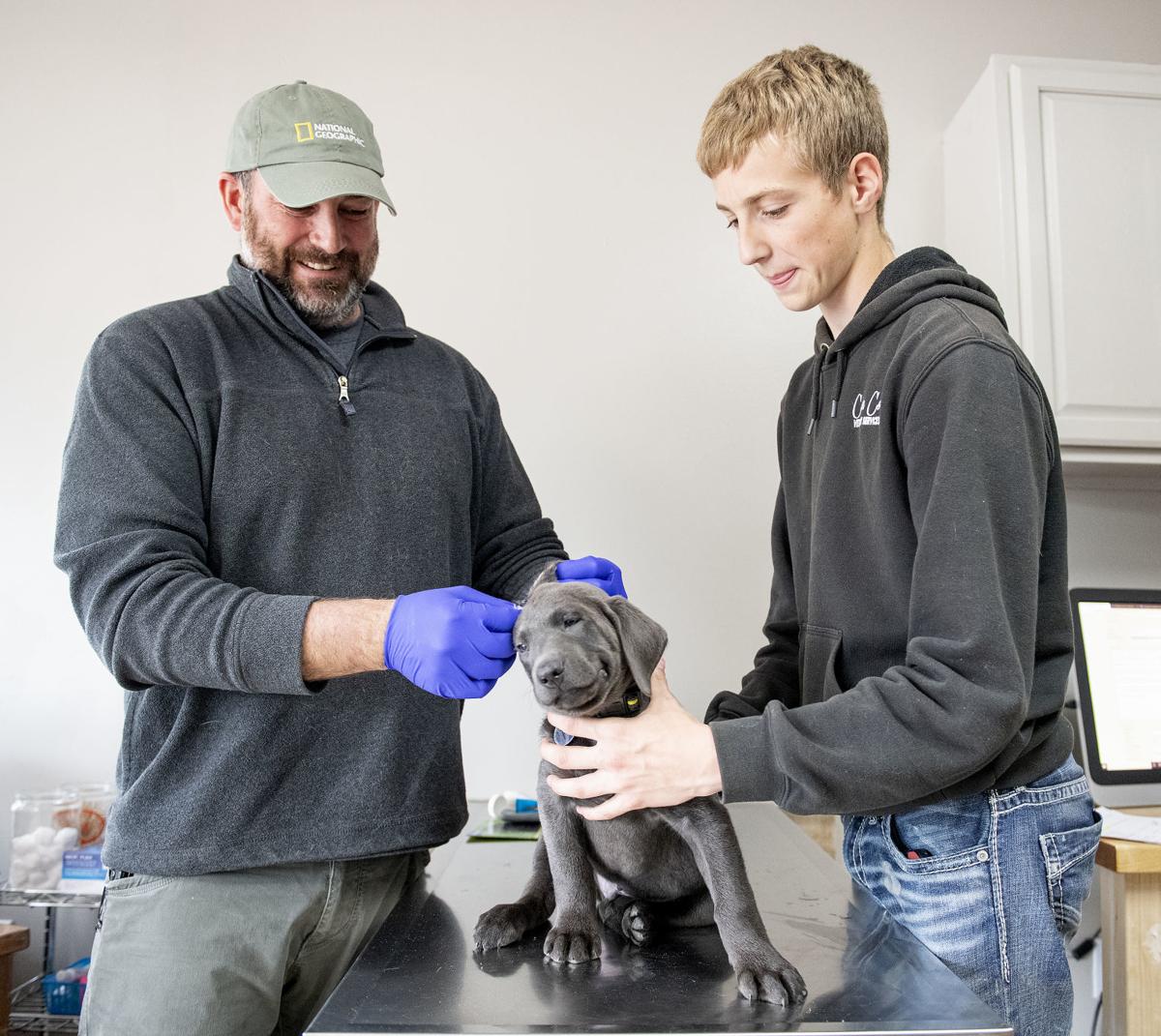 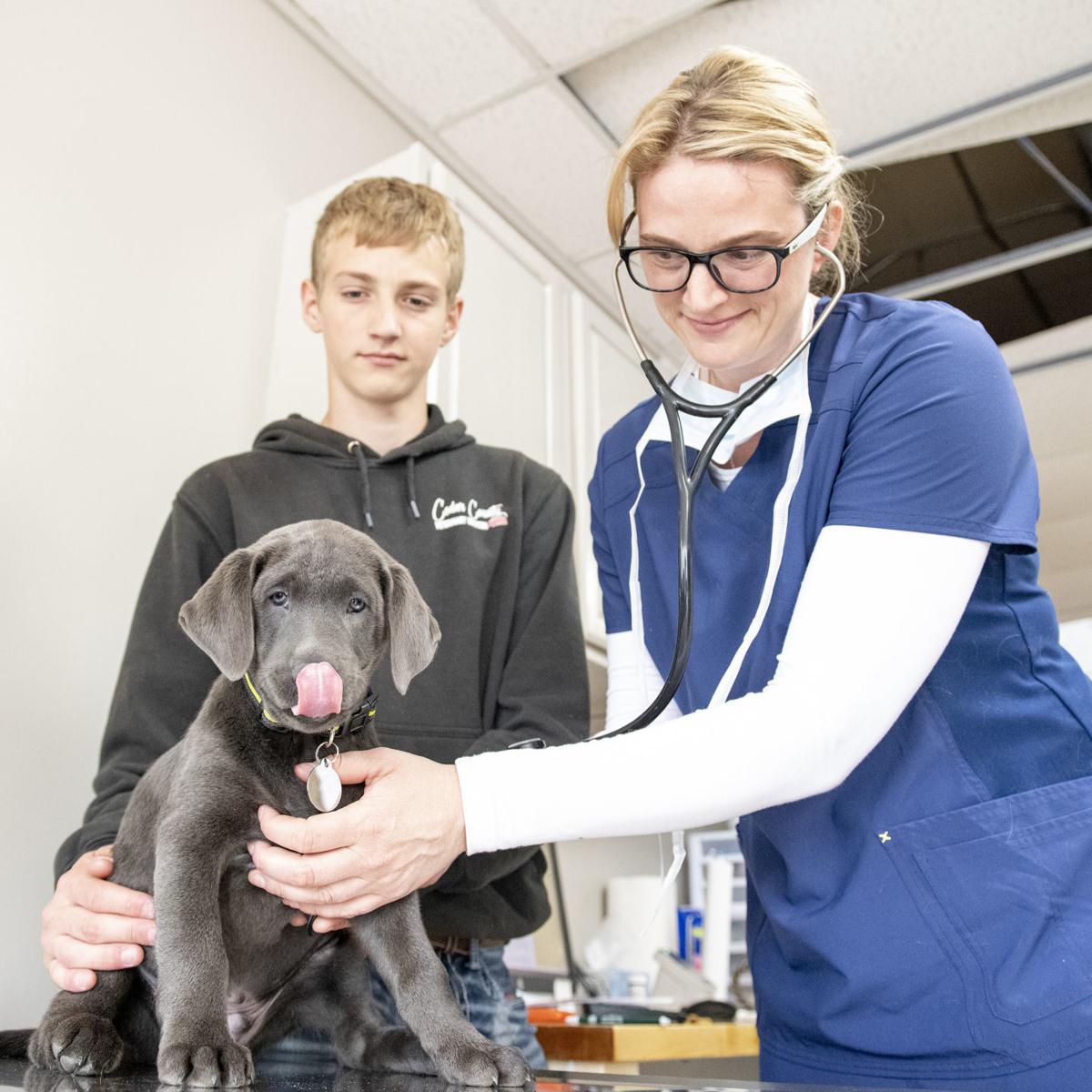 Erin Schroeder performs a checkup on a charcoal Labrador puppy named Trip while her son Chase assists. Erin and her husband, Ben, own Cedar County Veterinary Services in Hartington, Neb., site of their TV show "Heartland Docs, DVM," which will have its season two premiere May 30 on the Nat Geo Wild channel.