Sure, many of them discover several of their future players at camps and summer tournaments.

But University of Jamestown women's volleyball coach Jon Hegerle might be the only one who can say he first became aware of two of his future starters when he walked into an empty gym before his team's match and witnessed a couple of elementary school girls hitting a volleyball back and forth.

It was fall 2009, months after Hegerle had taken the head coaching job at the North Dakota school, and as he entered the gym before the Jimmies' first home match of the season, something unusual caught his eye.

"These two blonde-haired girls came in. They started peppering, and my jaw just dropped," Hegerle said of his first impression of watching Anna and Ellie Holen, then in third and first grade, respectively, hitting the ball to each other, their skill level comparable to players several years older. "Every home match I would get into the gym an hour and a half early, and these two would show up.

"I told my assistant coach that if I'm still around when they're graduating, we need to find a way to get them to be Jimmies."

Little did he know at the time he already had a recruiting advantage.

The youngest two of Dennis and Karyn Holen's eight children, five of their older siblings attended Jamestown before them. It wasn't a tough sell to convince Anna, then Ellie, to follow the family's footsteps to the Jamestown campus 45 minutes from their hometown of LaMoure, North Dakota.

The sisters -- senior Anna, a 5-foot, 7-inch outside hitter, and sophomore Ellie, a 5-foot, 4-inch libero -- are key players in undefeated and top-ranked Jamestown's run at a national championship, which began with a win Tuesday morning during the opening day of the NAIA Women's Volleyball Championship tournament at Sioux City's Tyson Events Center.

Young Anna and Ellie were regulars at Jamestown volleyball matches, thanks to family friend Dylan Moen, a volunteer assistant coach who was from their hometown and had informally coached them from an early age. Since he had to be at the gym so early before Jamestown matches, he'd bring the two along and hit with them.

Though only 7 or 8 at the time, Anna remembers those pepper sessions with her sister on the Jamestown court. They became aware that Hegerle had taken an interest in their play.

"I vividly remember him coming in and watching us," Anna said. "We're probably his youngest recruits. He must have known all along before we even knew."

Like many college athletes, Anna and Ellie were hooked on sports nearly from the moment they were born.

"We always joke, our first six (siblings) are well older than us. They put a ball in our hands, whether it was a basketball or volleyball, before we could walk," Anna said.

It didn't hurt that their mother was the high school volleyball coach and allowed her youngest daughters to tag along to practice, even joining drills with the high school girls.

They and their impromptu practices at home were also a danger to furniture and glass.

"We would pepper in our living room," Ellie said.

Both laugh, remembering being told to take their play outside, but not soon enough to prevent a few broken vases and plates. The TV survived, Ellie said, but it took a few hits, too.

Growing up, they attended camps at Jamestown, but both swore they'd go to college somewhere different from their siblings.

Hegerle began recruiting each during their junior year in high school. Anna said it wasn't an aggressive sales job, but maybe Hegerle sensed it didn't need to be. For all their talk of going somewhere else, they were drawn to the campus so familiar to them.

"He said he knew we were going to be Jimmies," Anna said Hegerle has told them many times since they've been on campus.

Now grown up, the sisters' play continues to remind Hegerle of those first times he saw them 12 years ago.

"They just loved it, and they're still like that," he said. "They'd play all day if they could."

Or at least, if everything goes as hoped for the sisters and their Jamestown teammates, until the championship match Saturday night.

Siouxland deer hunters should take note of a program that turns trophy buck hides into leather for craft kits and wheelchair gloves for veterans.

For more than two decades, Bret Hayworth covered the actions of local, state and national politicians across Siouxland.

SOUTH SIOUX CITY -- Good ideas remain good ideas, no matter how long it takes for them to come to fruition. 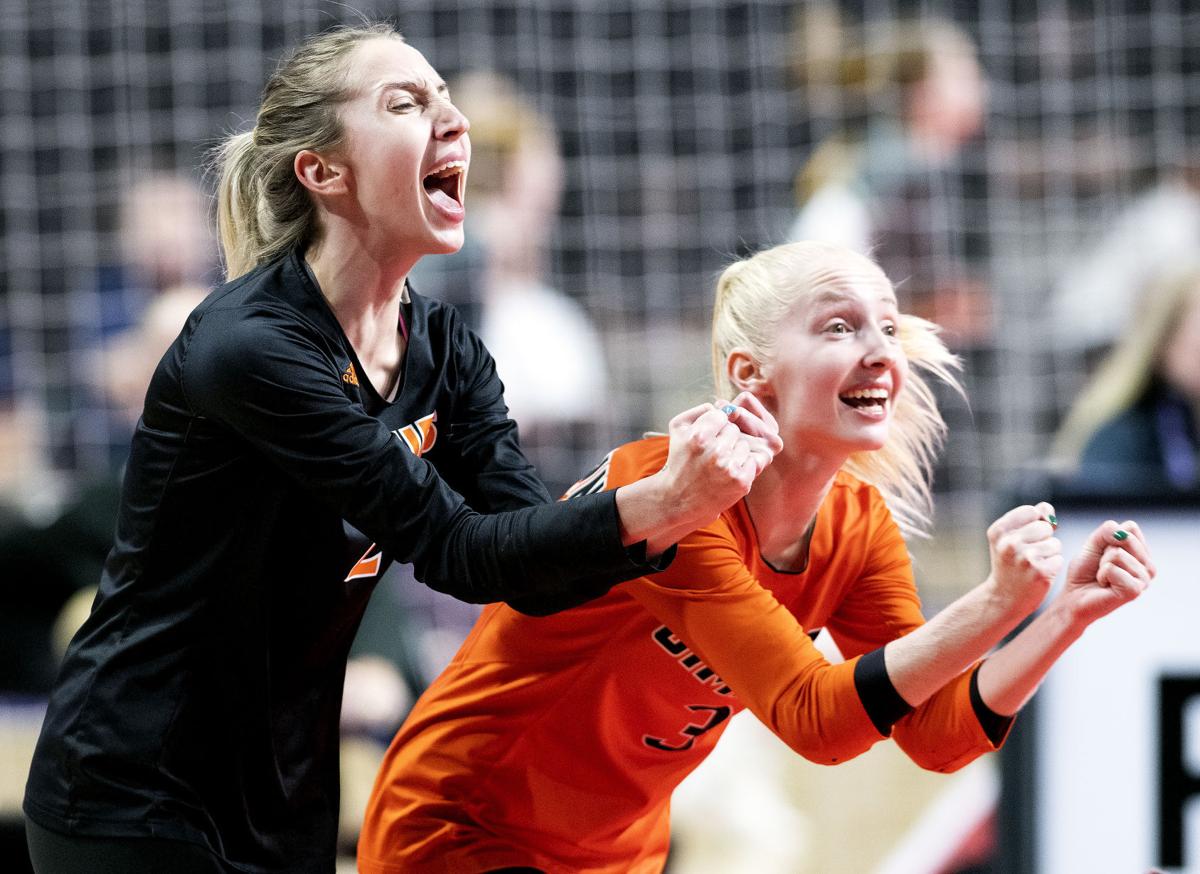 Sisters Anna, left, and Ellie Holen celebrate a point during University of Jamestown's match against Texas Wesleyan University Tuesday morning at the NAIA Women's Volleyball Championship at the Tyson Events Center in Sioux City. The sisters, both Jamestown starters, are part of a long line of siblings who have attended the North Dakota school, and their volleyball skills caught their coach's attention when they were in elementary school. 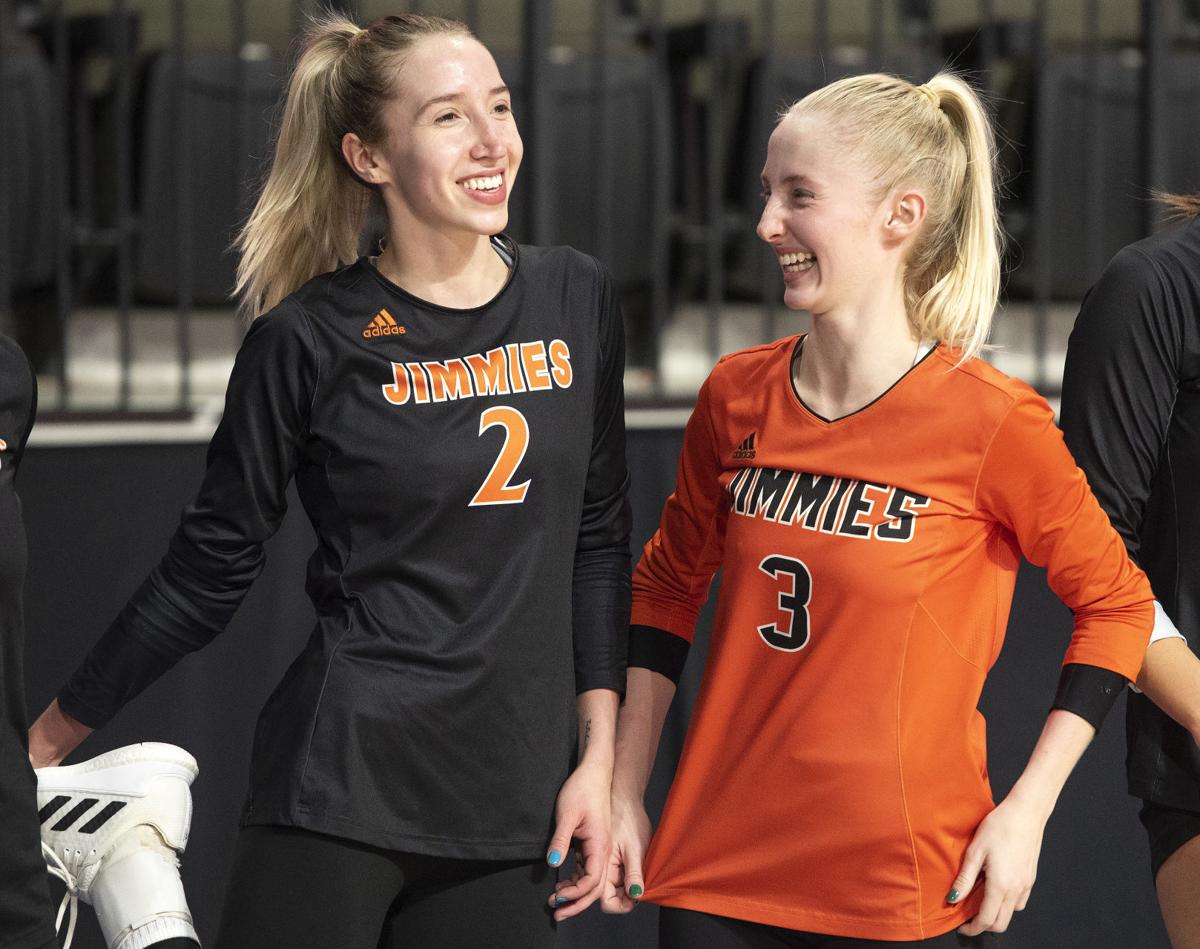 Sisters Anna, left, and Ellie Holen, laugh during warmups Tuesday morning before the University of Jamestown's opening match in the NAIA Women's Volleyball Championship tournament at the Tyson Events Center in Sioux City. The two have played volleyball for as long as they can remember, and as elementary school students, the two attended Jamestown games, spending time hitting balls on the court hours before the matches started. 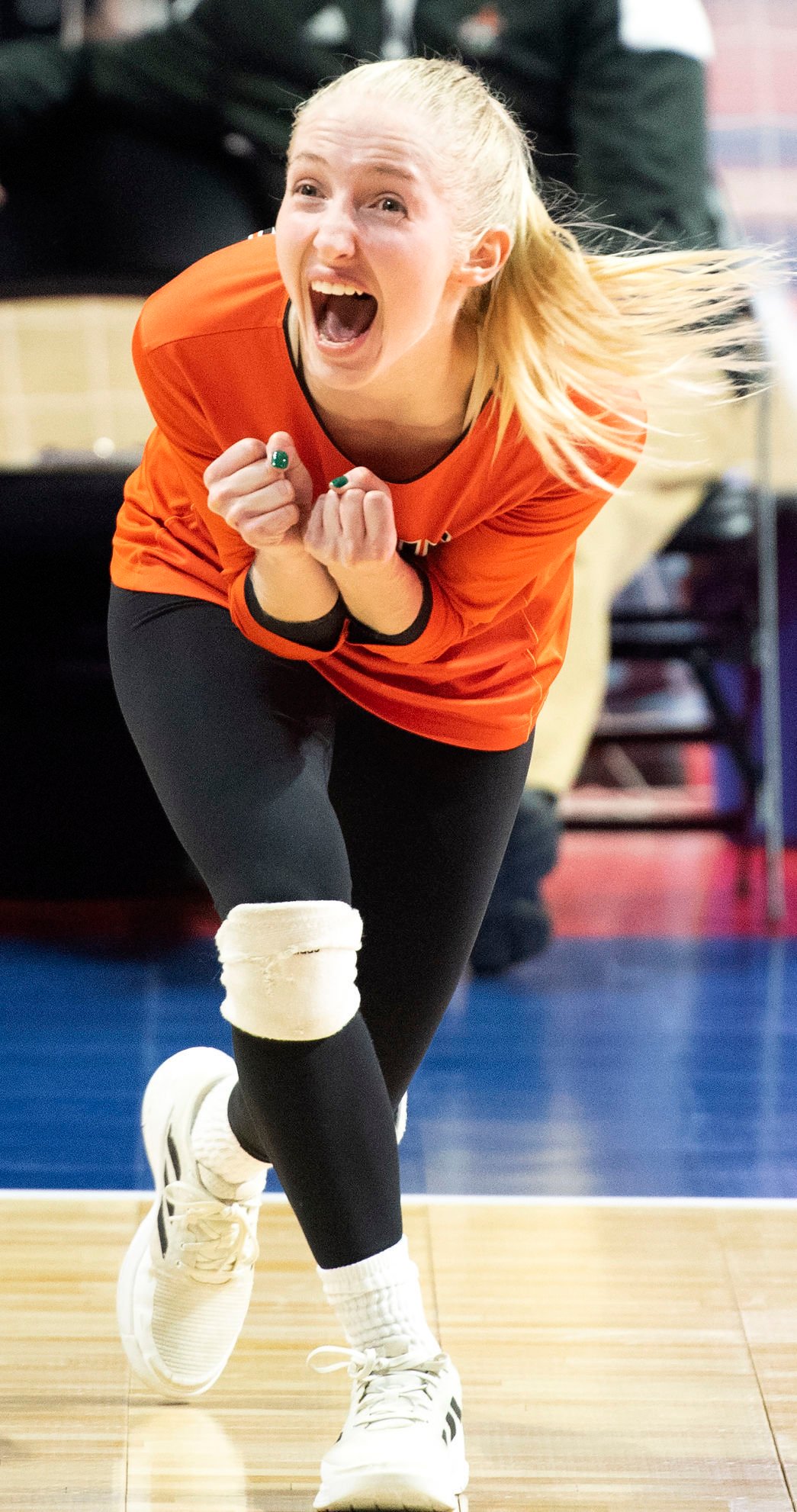 University of Jamestown's Ellie Holen celebrates a point during her team's win over Texas Wesleyan University Tuesday morning in the opening day of the NAIA Women's Volleyball Championship tournament at the Tyson Events Center in Sioux City. Ellie and her sister, Anna, are teammates for the top-ranked Jimmies. 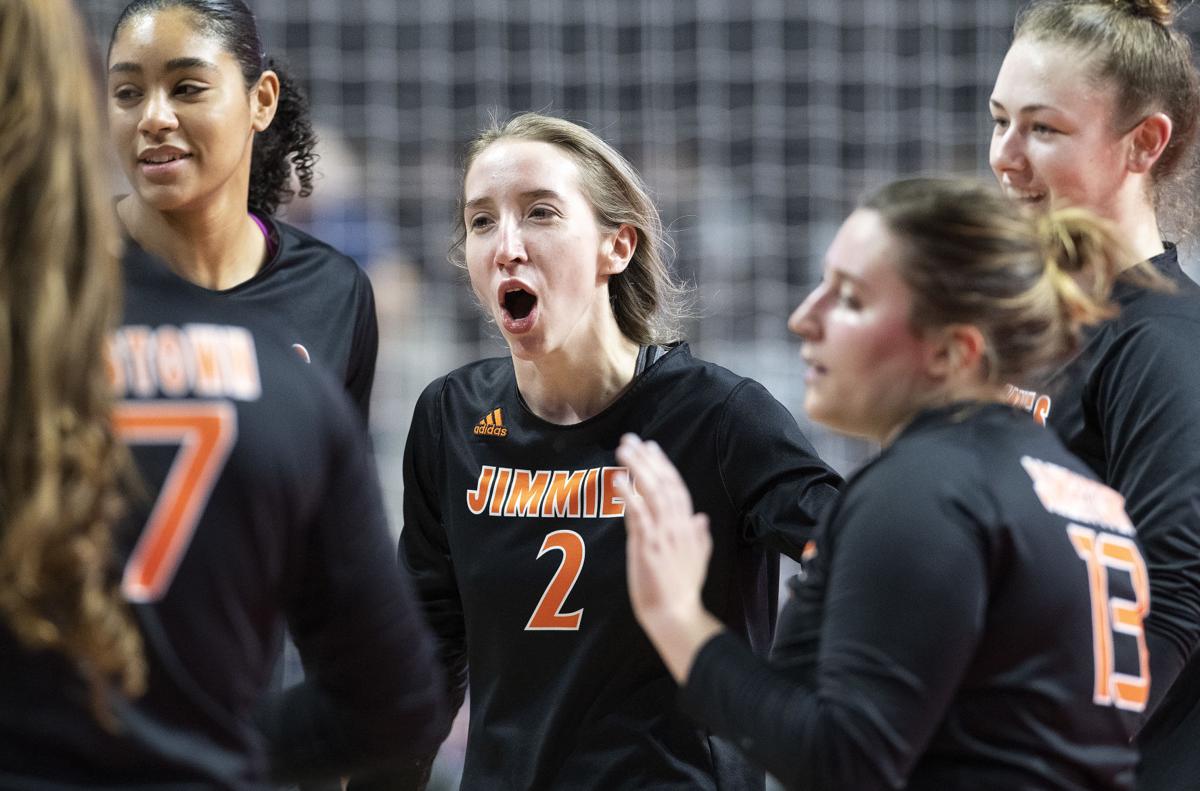 University of Jamestown's Anna Holen, 2, cheers a point with her teammates during Jamestown's win over Texas Wesleyan University Tuesday morning at the NAIA Women's Volleyball Championship tournament at the Tyson Events Center in Sioux City. Holen and her sister, Ellie, both start for the undefeated Jimmies. 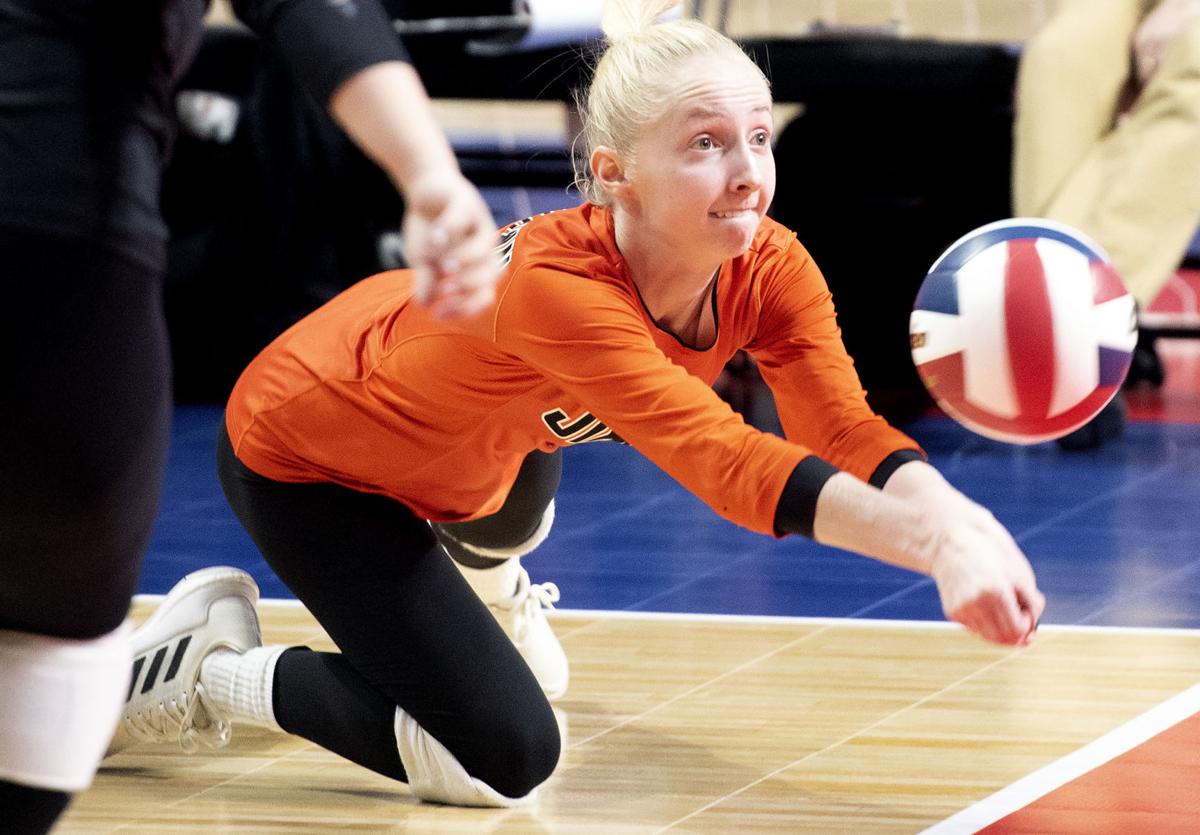