SIOUX CITY -- The DMV jokes, at least in Iowa, can be put to bed.

You know, the ones that follow along the lines of: "It took so long to (insert task here), it was almost like waiting in line at the DMV."

The list of punchlines was seemingly as endless as, well, the wait at the DMV office.

The COVID-19 pandemic has us all longing for a return to normal. But if there's one positive to come out of it, it's this: you don't have to spend hours waiting to renew your driver's license in Iowa anymore.

On Aug. 26, the IDOT announced that walk-in service no longer will be offered at its driver's license service centers. Customers now must go online and sign up for an appointment, as they have been doing since March 16, when the IDOT initiated the appointment-only model in response to the coronavirus pandemic.

The move was already something the IDOT was planning to do, but the pandemic pushed up the implementation. After an adjustment period, officials began noticing changes. No longer forced to wait for who knows how long, customers were happier.

Not having to deal with frustrated customers, IDOT workers were less stressed out and were completing just as many transactions as before the walk-ins were halted.

When the five-star service reviews began popping up on Google, something never seen before, the folks at the IDOT knew they had made the right decision.

With a set appointment time at, say, 2 p.m., a customer can come a couple minutes before, check in and be gone in 10 or 15 minutes. Want to come in over your lunch break or before work or school? You're now nearly guaranteed to get where you need to go on time because you don't face an uncertain wait time.

"You are now actually able to get in and out," Ferdig said.

A visit to the Sioux City service center on Wednesday showed a waiting area full of empty chairs. Most customers barely had the chance to settle into their seats when their number was called to go to one of the five service desks.

Ben Dreessen, of Kingsley, Iowa, had made an appointment to renew his driver's license in July. He showed up Wednesday afternoon, waited maybe three minutes before he was called, he said, and was out of the office in no time.

"I think this is a lot more efficient," he said of the new appointment procedure. "I don't mind it at all."

It's not for everyone. When asked what she thought of the new procedure, a woman who didn't wish to be identified said, "It sucks."

She's been back six times this summer in an effort to get her CDL license, she said, and each time she's had to wait weeks for an available appointment time.

Gillett acknowledged the shortage of timely appointment slots. Operations were slowed down during the pandemic's early months, and many people put off license and ID renewals, so there's a backlog. You might have to schedule your appointment up to 90 days out, similar to setting up a doctor visit.

That doesn't mean you have to wait for weeks. Ferdig said that when the Sioux City office opens at 8 a.m. each day, 100-150 appointment slots are already filled by people who scheduled days or weeks earlier. But every morning, about 60-100 same-day slots are made available for people to claim and get same-day service.

An increasing number of people have chosen to avoid the scheduling process altogether and have opted for online, rather than in-person, license or ID renewal. Gillett said that prior to the pandemic, about 400 people per week renewed their licenses online. That number rose as high as 3,000 weekly after the pandemic began and has leveled off to around 1,500 a week.

It's all been a change, but one that, for the most part, people have been agreeable to.

"I think people are adapting well," Ferdig said. "It's so much better. People are happy they don't have to wait as long."

And that's no joke.

Frank Newell was a 20-year-old radio operator told to take pictures of Nagasaki, parts of which had been leveled completely. Focused on his job, he didn't have time to think about what type of bomb could have caused that type of damage. 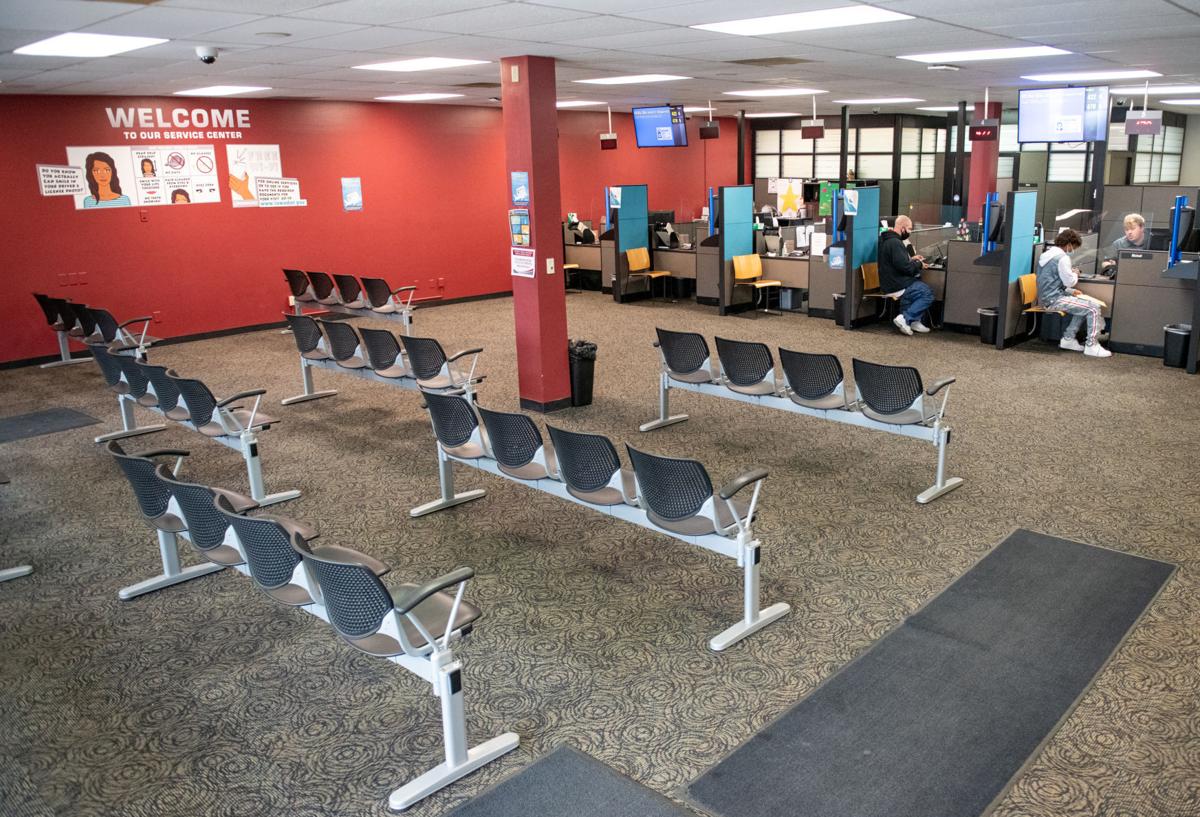 Empty seats are now a common sight at the Iowa Department of Transportation driver's license station in Sioux City now that the department has eliminated walk-in service and has all customers sign up for appointments online, cutting the wait time dramatically. The IDOT went to appointment-only service in March when the COVID-19 pandemic hit, and on Aug. 26 announced it was making the change permanent. 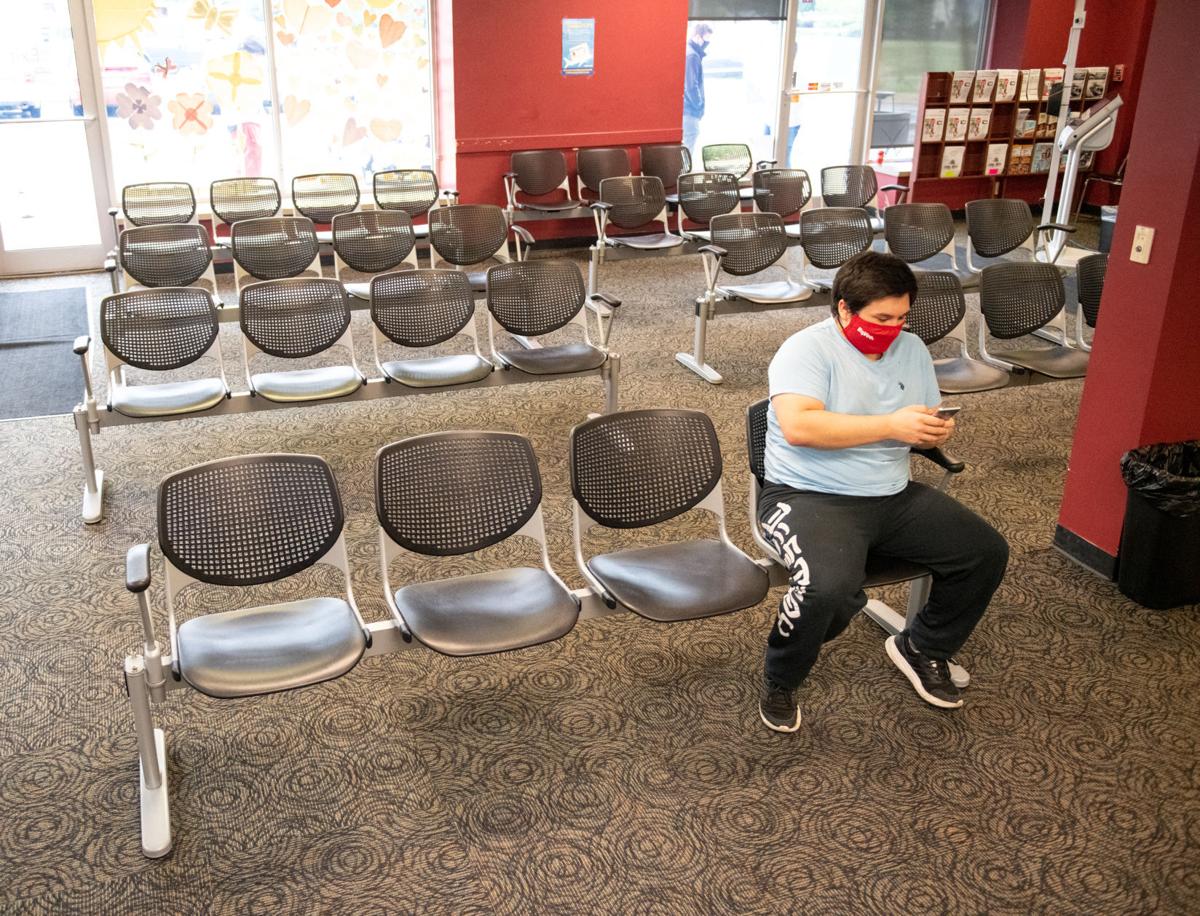 Izaiah Mercado sits in a mostly empty waiting area at the Sioux City driver's license station Wednesday. The Iowa Department of Transportation has changed to appointment-only service in which customers can reserve a time slot and not have to sit through long waits for service.