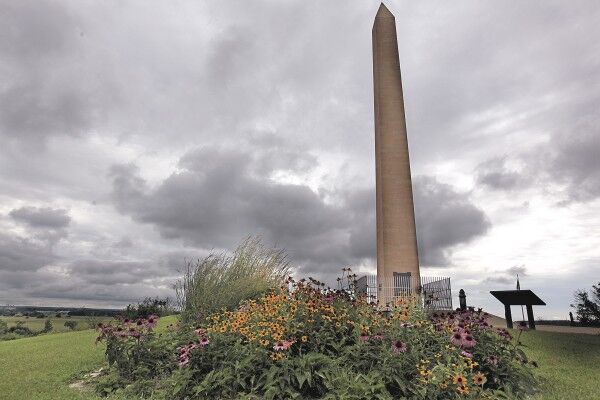 The 100-foot-tall sandstone obelisk, the Sergeant Floyd Monument, overlooks the Missouri River from Floyd's Bluff in Sioux City. A proposal to rezone an area near the monument for storage units has drawn letters of concern from the National Parks Service and Iowa State Historic Preservation Office. 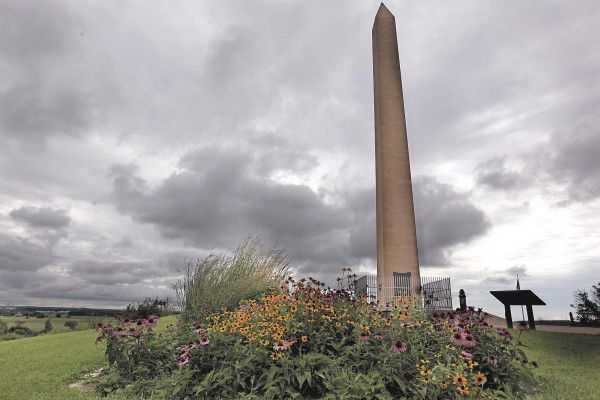 A half century ago, something remarkable happened in Sioux City that still reverberates throughout the country.

On Oct. 10, 1960, the National Park Service held a ceremony at the Sergeant Floyd Monument, signifying the obelisk’s designation as the country’s first national historic landmark.

The remains of Sgt. Charles Floyd are buried there. He died Aug. 20, 1804, on a bluff overlooking a small river that William Clark named after him near what is now Sioux City. He probably died of a ruptured appendix.

He was the only member of the Lewis & Clark Expedition to die on that two-year journey of discovery. And, he was the first American soldier to die west of the Mississippi River, Bev Hinds, a noted Lewis and Clark historian from Sioux City, said.

Floyd’s gravestone almost didn’t receive the federal designation. In 1959, the National Park Service’s advisory board ruled against the proposal. The board decreed it was “not of exceptional value under the terms of the historic sites act,” according to Journal archives.

Ward E. Evans of Sioux City, who was promoting the idea, declared that ruling wasn’t the nail in Floyd’s coffin.

Hinds said Floyd’s contributions to the expedition were notable. A native of Kentucky, he was a sergeant and quartermaster and one of the first to enlist in the expedition. He kept a journal, which has been helpful to historians. The fact he was the only one to die on that trek solidified his importance.

“He did not die in war, but in a peace-time expedition of the Louisiana Purchase,” she noted.

During the ceremony 50 years ago, Howard W. Baker, regional director of the National Park Service, said, “It was largely through his efforts that the Floyd Monument has received this national recognition it so richly deserves.” The monument, Baker said, represents “an island of history (surrounded) with a sea of industrial and commercial developments and public works.”

Assistant Secretary of the Interior George Abbot presented the certificate to city officials.

The 100-foot tall Egyptian-style monument has been standing since 1901, and remains the largest monument to any member of the expedition.

The cornerstone was laid on Aug. 20, 1900. Burial of Floyd’s remains under the obelisk marked the fourth time his remains were interred, following earlier washouts of graves in the fragile Loess Hills dirt.

On Oct. 22, 1997, the city dedicated the monument’s plaza in honor of Bev’s late husband, Dr. V. Strode Hinds, who had served as president of the National Lewis & Clark Trail Historical Foundation.

At least one mystery remains, Hinds said. When the monument was completed in 1901, the large marble slab that had covered Floyd’s grave since 1895 disappeared. The slab measured 3-feet wide by 7-feet long. She has looked for it.

“I expect it will show up some day in somebody’s dirt basement.”

The monument is open daily, at no charge. It is located on the east side of South Lewis Boulevard/U.S. Highway 75 south of Glenn Avenue.

The 100-foot-tall sandstone obelisk, the Sergeant Floyd Monument, overlooks the Missouri River from Floyd's Bluff in Sioux City. A proposal to rezone an area near the monument for storage units has drawn letters of concern from the National Parks Service and Iowa State Historic Preservation Office.