For months now during the novel coronavirus pandemic, Demetri and fellow Sioux City Police officers must take their temperature before they begin their shift. Anything above 100.4 degrees and they're sent home with one of the symptoms of COVID-19.

"98.6. Looks like I'm working today," Demetri said on a recent morning after holding the thermometer to his head.

It's one of many changes law enforcement officers have adjusted to since the pandemic began earlier this year. It's a hands-on job, and you can't patrol streets and highways or respond to emergency calls from a home office.

"It's (COVID) just a huge obstacle in our way to maintain that service, but it's just another challenge that we have to overcome," Sioux City community policing Sgt. Jeremy McClure said.

Meeting with crime victims, responding to a heated domestic disturbance or arresting a suspect all involve face-to-face interactions in which the recommended 6 feet of social distancing often is not practical or possible. Officers wear masks over their mouths and noses as much as possible, but masks can muffle their voices, making it hard to understand what they're saying. Removing a mask so that commands can be heard clearly takes precedence over protection from the virus, McClure said.

"As much as we want to mitigate COVID risks, sometimes other life-and-death situations take priority," he said.

Woodbury County Sheriff Dave Drew said deputies are encouraged to wear masks when responding to calls, but are allowed to take them off if they're outdoors or can maintain a safe distance. He and McClure said emergency dispatchers have played a key role in helping officers take precautionary measures. During each call for service, dispatchers obtain information from the caller to see if there are any people at the scene who have COVID-19 or symptoms of the illness and relay that information to officers, who might be able to ask people to step outside when they arrive so they can avoid others who might have the virus.

Drew said the larger concern for the sheriff's office has been keeping the virus under control inside the Woodbury County Jail. Visitation of inmates from outside groups such as Alcoholics Anonymous have been prohibited during the pandemic. Jail officers wear masks at all times. Movement of inmates within the jail has been restricted to reduce the number of people they come into contact with. Inmates must wear masks when leaving their cell block to see a nurse, talk to their lawyer or go to court.

"We have done all right, better than anticipated," Drew said of the efforts to contain the virus.

After an initial outbreak of seven cases in June, Drew said the number of cases among inmates has been limited.

He and McClure both said officers have tested positive during the pandemic, but they've been able to maintain normal staffing levels by asking other officers to work overtime to fill in.

In an effort to reduce exposure to the virus, Sioux City's police officers sanitize their patrol vehicles at the start of each shift. Roll call and briefings at shift changes are now done virtually on officers' in-car laptops rather than in a meeting room.

"It's like a video chat with our supervisor. He lets us know anything going on from the night before," officer Ryan Moritz said.

Moritz said he misses having the few minutes of "water cooler talk" with other officers before heading out on patrol.

"The camaraderie is degraded a little bit, but it gets us out a little bit earlier," Moritz said of the new reality of virtual meetings.

It's one of many adjustments officers have made and will continue to make, McClure said. No matter the number of COVID-19 cases in the city, officers will continue to interact with the community as safely as possible.

"The biggest thing ultimately is we have a job to do," he said. "We've made a commitment to the community and we can't waver."

"The online banking and our mobile apps were so flooded that people were timing out or couldn't get in. Both of them were inundated," said Troy Steensen, marketing director of Security National Bank in Sioux City.

Officers determined that a woman had taken a family member's car and attempted to drive it into the river. She apparently drove through a construction site and exited the car once it became stuck on the bank of the river.

The clinic, which was offered by scheduled appointments only, is the latest round of vaccinations of people in the Phase 1A priority group, which includes doctors, nurses and other health care providers. 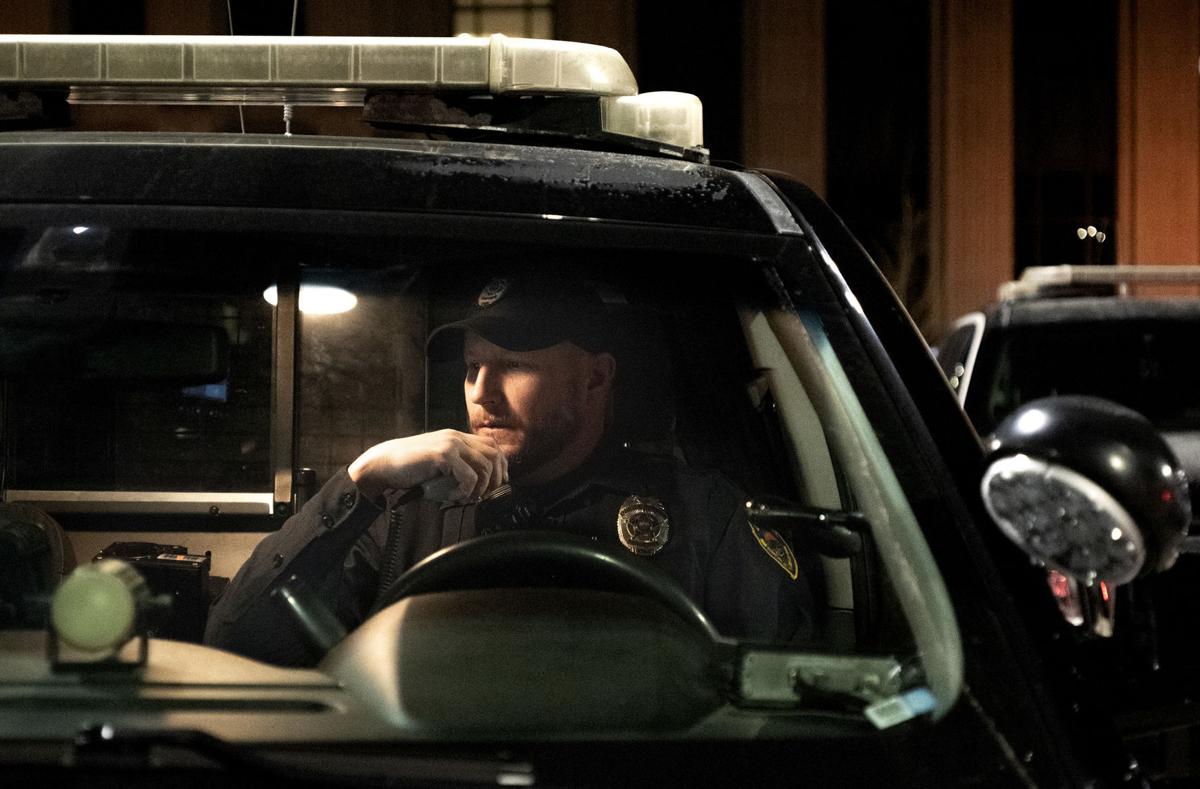 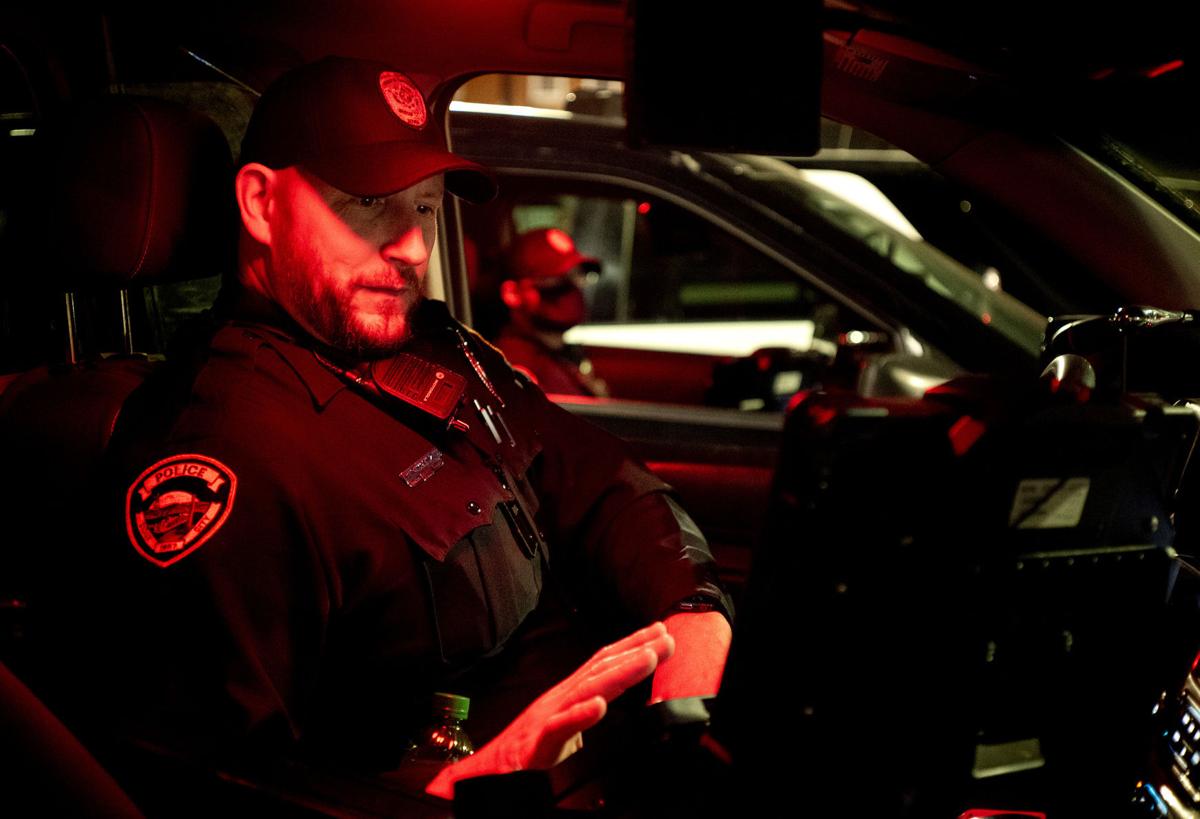 Illuminated by the glow of red dome lights, Sioux City Police officers Ryan Moritz, left, and Jeffrey Demetri log into their vehicles' mobile data terminals at the start of their shift on Dec. 8 at Sioux City Police Headquarters. Due to the COVID-19 pandemic, officers are sanitizing their patrol cars and receiving roll call information via virtual briefings. 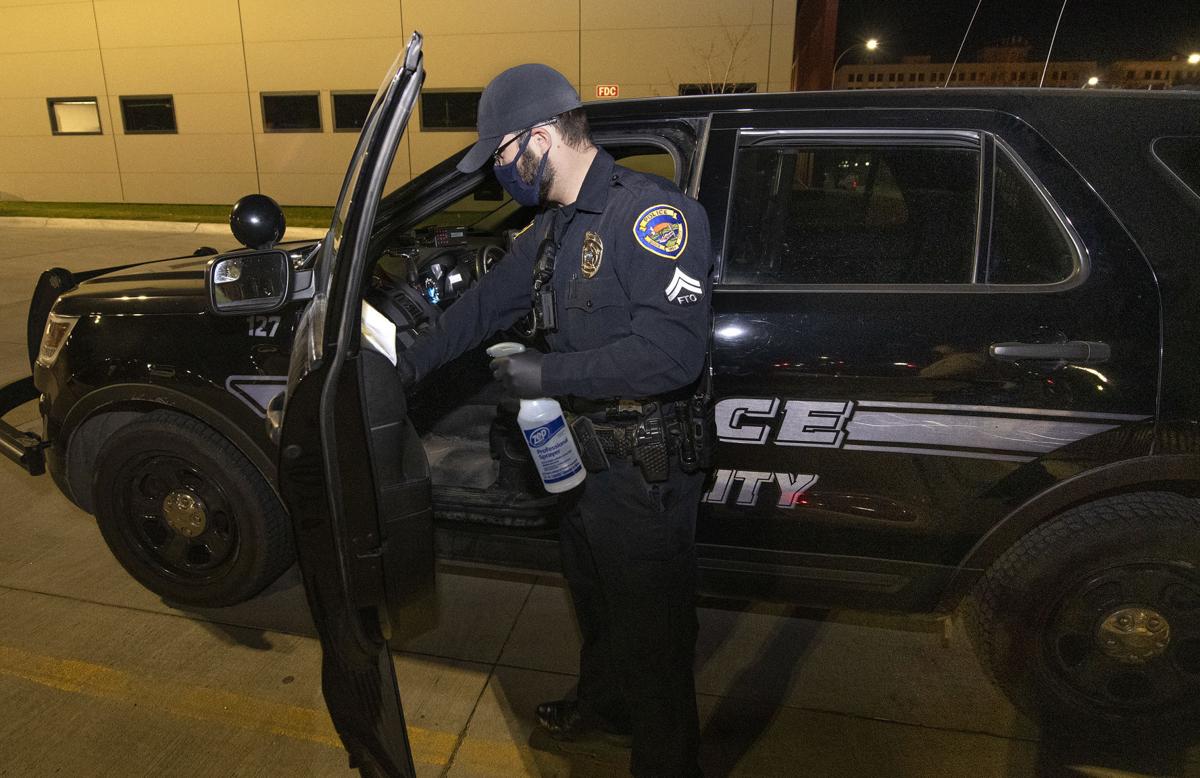 Sioux City Police Department officer Jeffrey Demetri sanitizes the door handles of his patrol vehicle at the start of his shift on Dec. 8. Officers must take their temperatures before starting each shift to make sure they don't have a fever, a symptom of COVID-19.