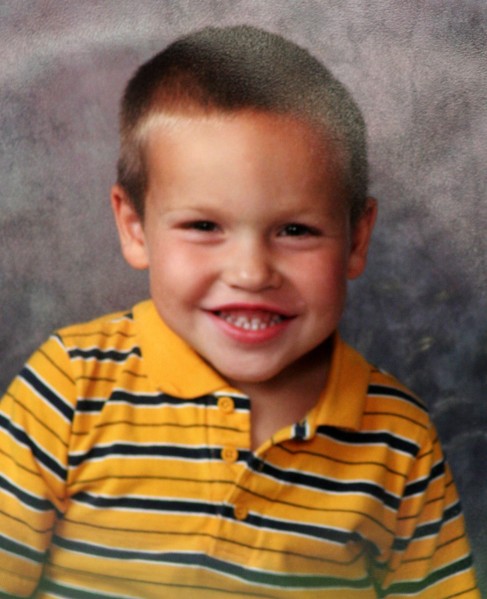 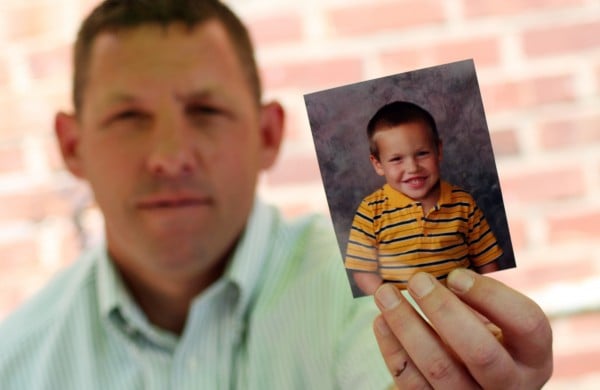 Brad Ackerman holds a photo of his son, Breiton. The 4-year-old boy went missing May 22, 2005. Authorities say he most likely fell into a creek and drowned, but never found his body.

ALTON, Iowa | Breiton Ackerman, 4, disappeared while fishing with his family May 22, 2005, on Willow Creek near Alton, Iowa.

The preschool graduate is presumed to have drowned. His body was never found.

Seven years later, police are still trying to unravel the mystery of what happened to Breiton. The boy simply vanished without a trace.

His father, Brad Ackerman, still wants to know what happened to his boy. Every May 22, he visits the spot his son disappeared.

“I don’t think you ever quit wondering, quit worrying,” said Ackerman, of Alton.

Breiton disappeared from Willow Creek. Normally shallow, the creek running through a corn field was swollen with rain.

“Water was the only thing that makes sense,” Ackerman said. “And that still doesn’t make sense.”

Divers, volunteers and search dogs scoured the creek without finding anything. They followed it 17 miles to the Floyd River in Le Mars, Iowa. Then, they searched the Floyd River down to the Missouri River.

Searchers tore up the concrete bridge Breiton was last seen on in the days after he went missing. Volunteers dug up the creek bed with heavy equipment. Mesh fencing strung across the creek yielded nothing.

They did this even though experts said a child Breiton’s size would’ve only floated 100 yards down the creek, said Sioux County Sheriff Dan Altena.

“We found nothing. Not one iota,” Altena said. “Not a piece of ripped shirt or anything.”

Investigators chased several leads. Could Breiton have walked a quarter-mile to the blacktop highway and been kidnapped? Fallen into an animal hole and been buried?

“It’s been really hard to never find a body,” Altena said. “I think it’s difficult in any death, especially one like this.”

Brad Ackerman said he tries to find solace in the good times. Breiton riding his tricycle up and down the cattle barns. The four-wheeler rides father and son took together after chores. How mad Breiton would get when he got hurt.

Sioux County deputies reexamined the case a few years ago. They gave a polygraph examination to a relative at creek that day. Although they didn’t suspect the man, who went for help, of harming Breiton, Altena said they wanted to know if Breiton could have sneaked inside the vehicle without anyone knowing it.

The man passed the polygraph. No one at the creek is suspected of harming Breiton, Altena said.

The Ackerman family split up in the years after Breiton’s disappearance. Ackerman and his daughters still talk about happy memories. Breiton’s nicknames were ‘Melon head’ and ‘B.’ He loved playing with his toy farm, and his sisters.

“We laugh. We cry,” said Ackerman. “We have good times talking about things we used to do with Breiton.”

He’s tried to come to peace with what happened seven years ago.

Yet, he and investigators still wonder.

“We have gone to the scene where it’s happened quite often,” Altena said. “And, just looking at it you just want to start all over and do a total search all over again, because you think ‘how in the world is this possible?’”

The cause of 56-year-old David Lawrence Deaton’s death has been determined as an accidental drowning. No foul play is suspected, according to the Thurston County Sheriff’s Office.

Family members are mourning the loss of an avid fisherman found dead in the Little Sioux River in Cherokee.

Brad Ackerman holds a photo of his son, Breiton. The 4-year-old boy went missing May 22, 2005. Authorities say he most likely fell into a creek and drowned, but never found his body.