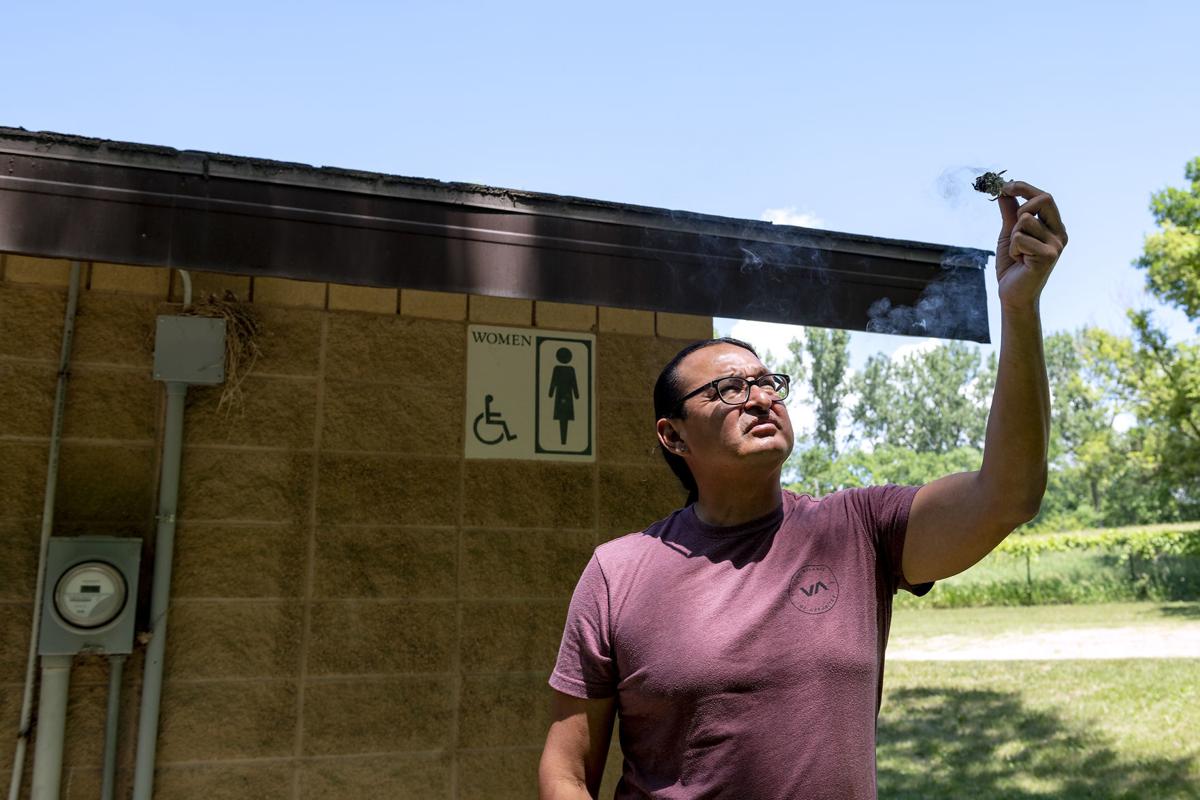 Michael O'Connor, of Sioux City, performs a ceremony with a prayer and burning sage to cleanse an area of War Eagle Park after racist graffiti was found on a bathroom wall. 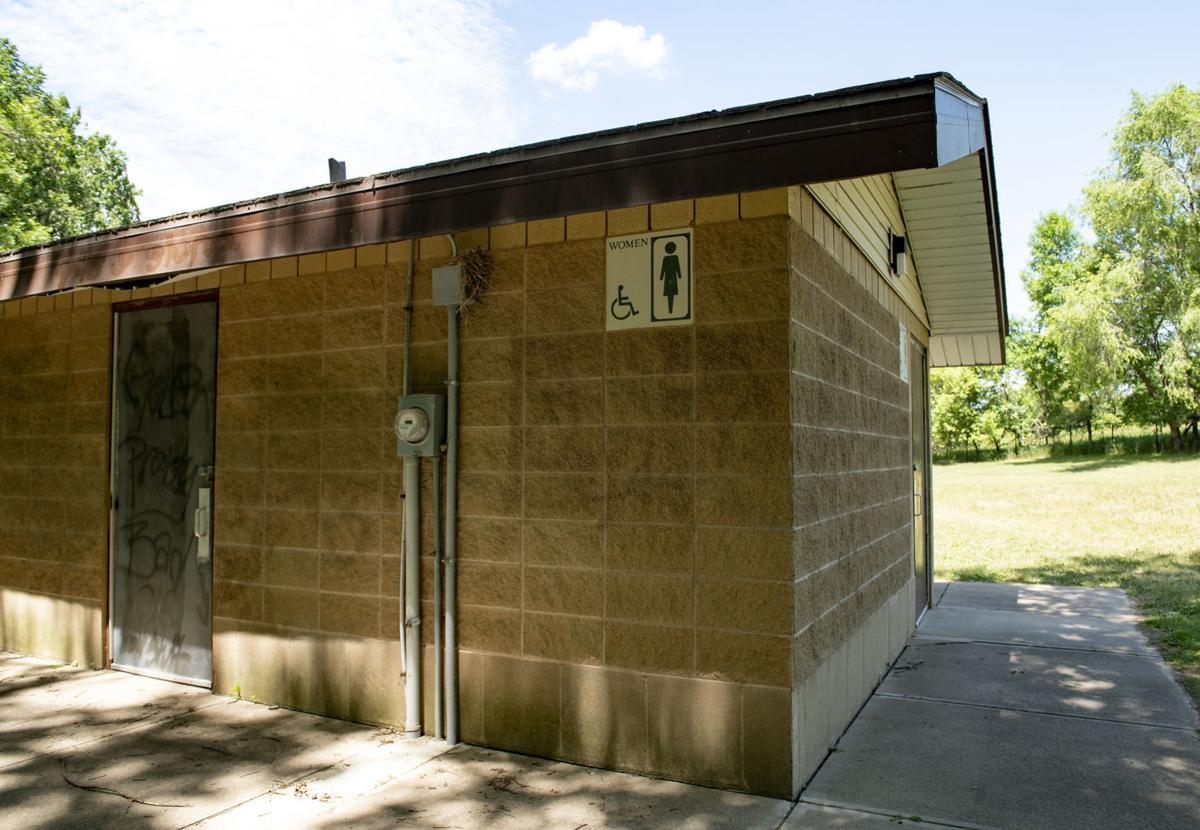 Hateful graffiti placed on a bathroom wall at War Eagle Park has been scrubbed away. 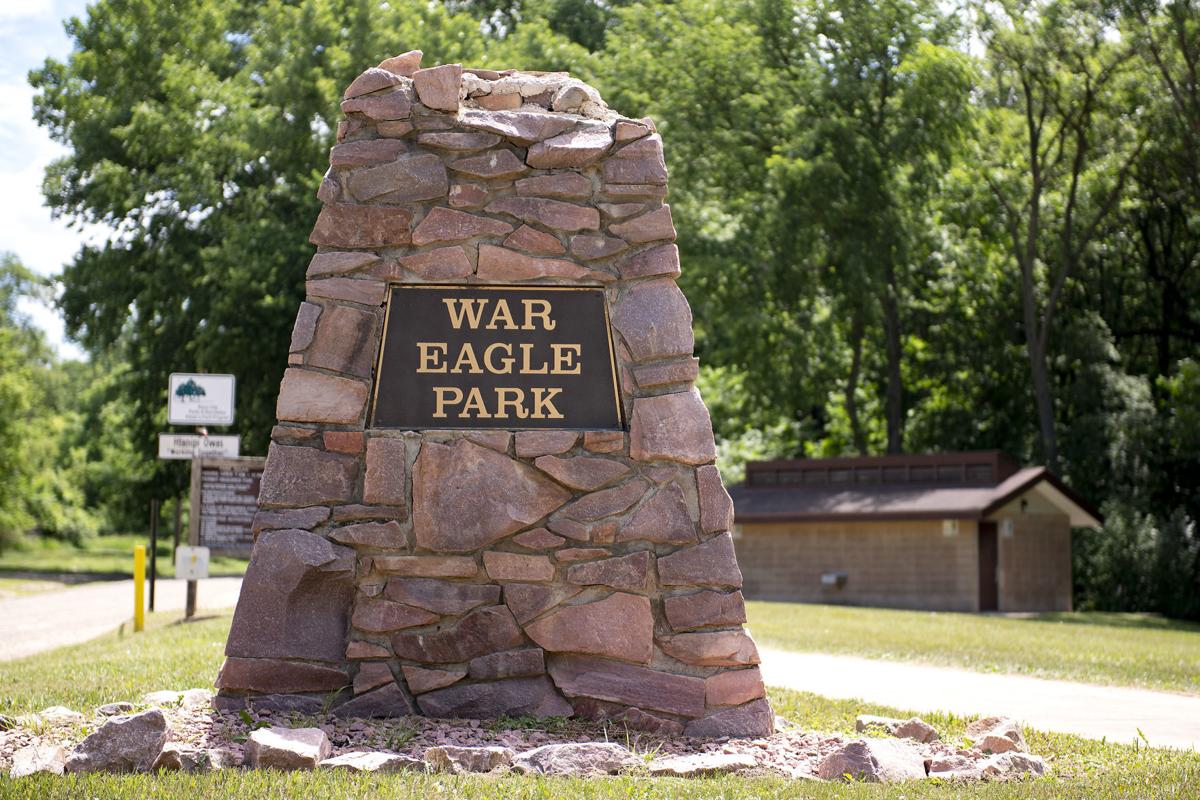 Hateful graffiti found at War Eagle Park has been cleaned off of a bathroom wall.

SIOUX CITY -- The Sioux City Police Department is investigating a racial slur that derogatorily refers to Black people that was painted in a city park.

Lt. Jeremy McClure on Wednesday said police had been to War Eagle Park on the west side of the city, which is near Chief War Eagle Monument.

"There was graffiti placed on (exterior) of the restroom at the entrance to the park, with a racial expletive in it," McClure said of the incident, which was reported just before noon Tuesday.

The painted phrase began, "I hate ..." and ended with a plural version of the "N" word.

Michael Wanbdi Gdeska O'Connor, of Sioux City, was out at the site Wednesday looking for spray paint cans. O'Connor burned sage in the vicinity of the graffiti, as a blessing to cleanse the area, which police had already air blasted away.

O'Connor frequently goes to the park to clean up vandalism, after five years of being involved in the city's Adopt A Park initiative.

"As a Native American community member and longtime Sioux City citizen, as well as a Yankton Sioux Tribal member, I am deeply concerned as to the recent vandalism and racist defacement that occurred at our sacred War Eagle Park," O'Connor said.

He added, "The racist defacement and vandalism that occurred in this sacred space should be a wake-up call to all. Without the efforts and friendships developed between Chief War Eagle and others from the Yankton Sioux Tribe with non-native settlers, there simply would be no Sioux City in existence today."

The monument marks the grave of the Lakota leader, who died in 1851. It is on a bluff overlooking the Missouri and Big Sioux rivers.

McClure said the department is working with the local Native American community to educate residents on the significance of the park.

"I would like to remind the public that abuse of the park is considered very disrespectful towards Chief War Eagle and his family who are buried there. We would hope that anyone visiting the park would treat it with the same reverence that a cemetery would be treated," McClure said.

O'Connor said he wishes police would patrol the park more frequently, as he said it is a magnet for frequent vandalism, illegal dumping and drug use.

"I have also observed this to be a popular stop off for many passersby along Interstate 29. All my time in the park I have had the privilege of meeting many folks from out of state and from across the nation," he said.

Working from home: For Journal staff, the good and the bad about working remotely

For the better part of two months, The Journal's newsroom was scattered all around Siouxland, gathering news remotely. Recently, we returned to the office and were able to weigh the good and the bad about the situation.

The tally of critically ill COVID-19 patients across Northwest Iowa remains lower than it was several weeks ago. On Wednesday, only 12 virus patients in the region were in the ICU, while seven were on ventilators.

Most of the bright-colored phrases and doodles appeared to be apolitical in nature, but one side of the bandshell had an acronym that is shorthand for a vulgar phrase implicating the police.

The man was inspecting a car with a possible mechanical issue on a bridge when a pickup truck drifted into the shoulder and struck the man.

The university is moving to a block schedule with mixed delivery systems, which include in-classroom, completely online or a combination of in-classroom and online.

The driver sped down Morningside Avenue, running a stop sign at South Paxton/Transit Avenue, before colliding with another vehicle heading westbound on Transit Avenue, police said. The suspects fled but were eventually taken into custody.

SIOUX RAPIDS, Iowa -- The police chief of Sioux Rapids has been placed on unpaid administrative leave for two weeks, after city officials took…

On Wednesday, law enforcement personnel in South Dakota for the first time can immediately pull over motorists and write a ticket upon seeing a person texting while driving.

Several blocks of Jackson Street in Sioux City getting construction

The work has an estimated mid-August completion date.

The new single-story jail will be built on a 38-acre plot of land in the vicinity near 28th Street, just north of the Lake Forest Mobile Home Community, and the aging jail downtown eventually will be shuttered.

On June 25, police arrested a Sioux City man in connection with a vandalism incident at the bandshell that was much the same as the one this weekend.

Lincoln was found with red paint on his face, torso, feet and a hand, and what appeared to be a Trump campaign flag wrapped around his neck.

Michael O'Connor, of Sioux City, performs a ceremony with a prayer and burning sage to cleanse an area of War Eagle Park after racist graffiti was found on a bathroom wall.

Hateful graffiti placed on a bathroom wall at War Eagle Park has been scrubbed away.

Hateful graffiti found at War Eagle Park has been cleaned off of a bathroom wall.