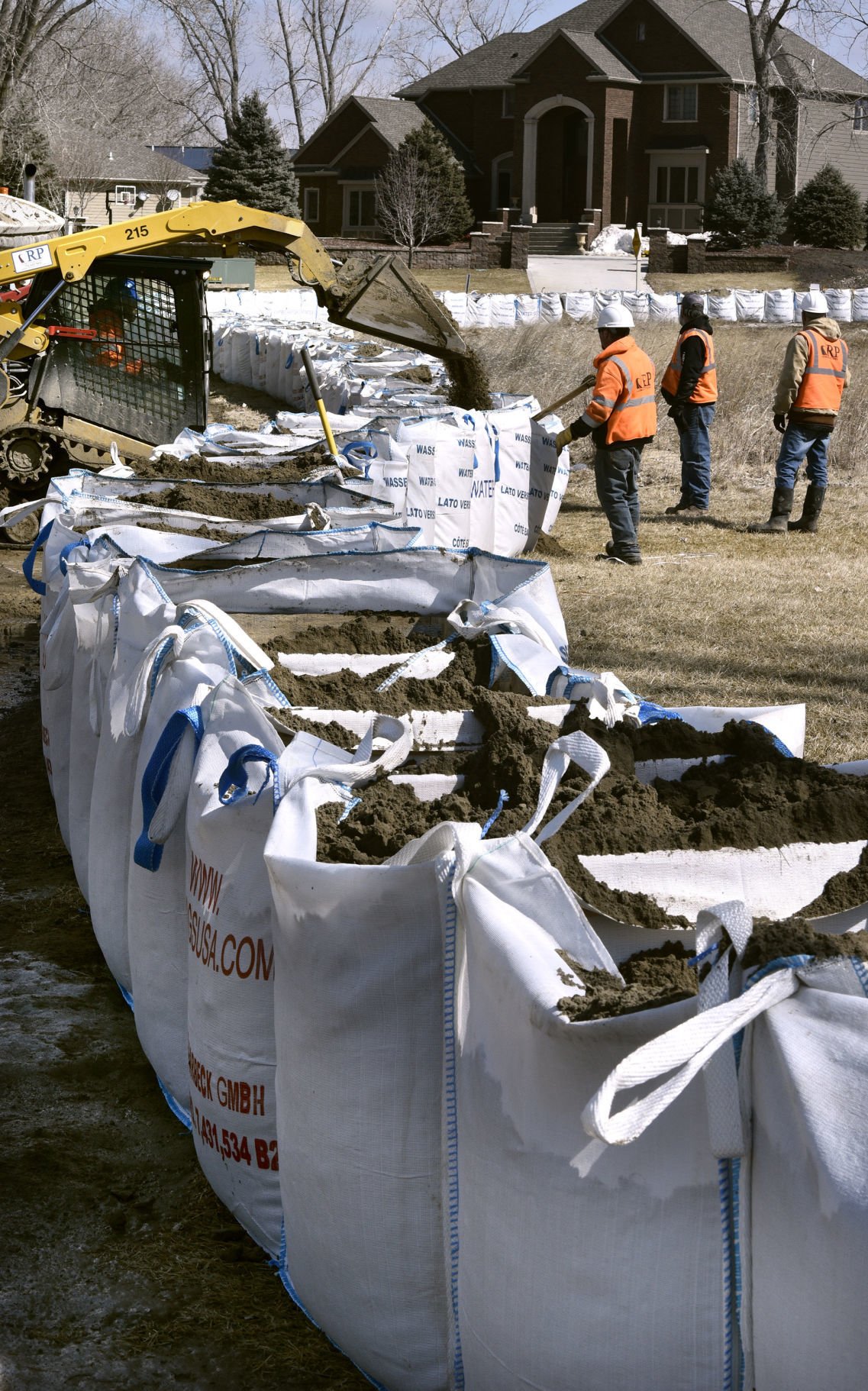 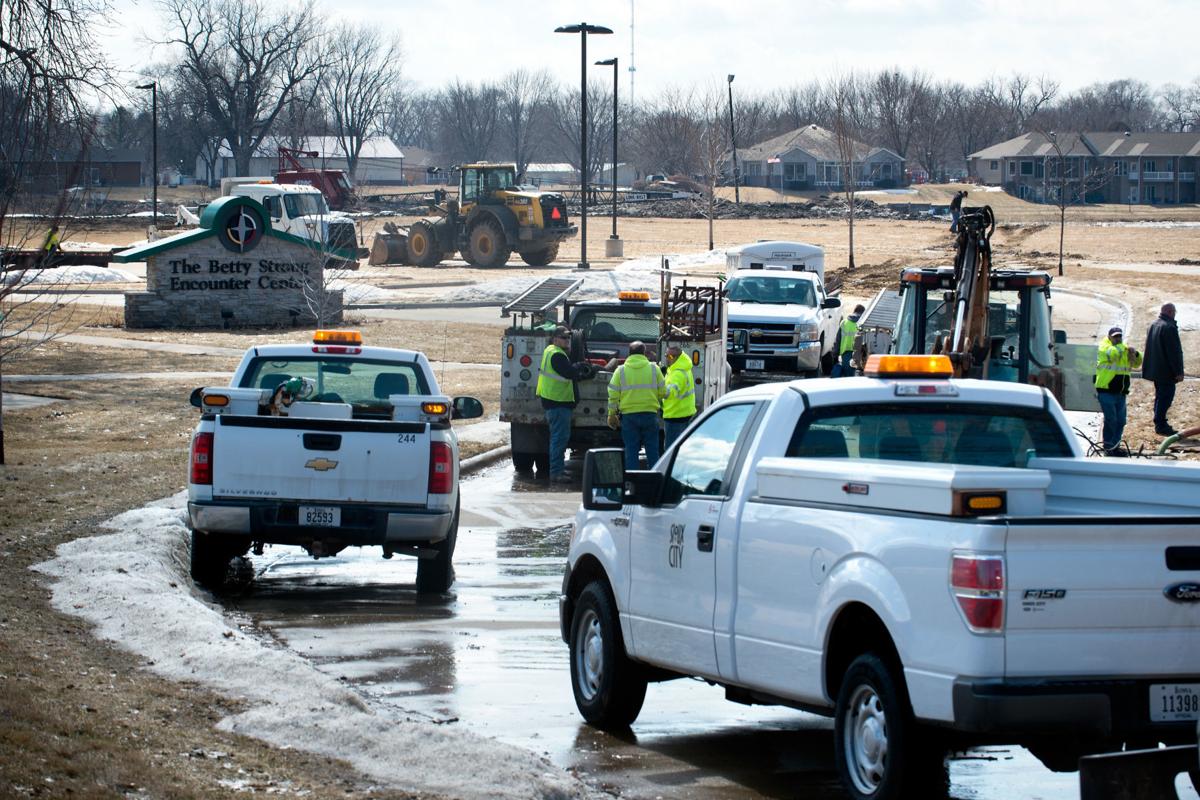 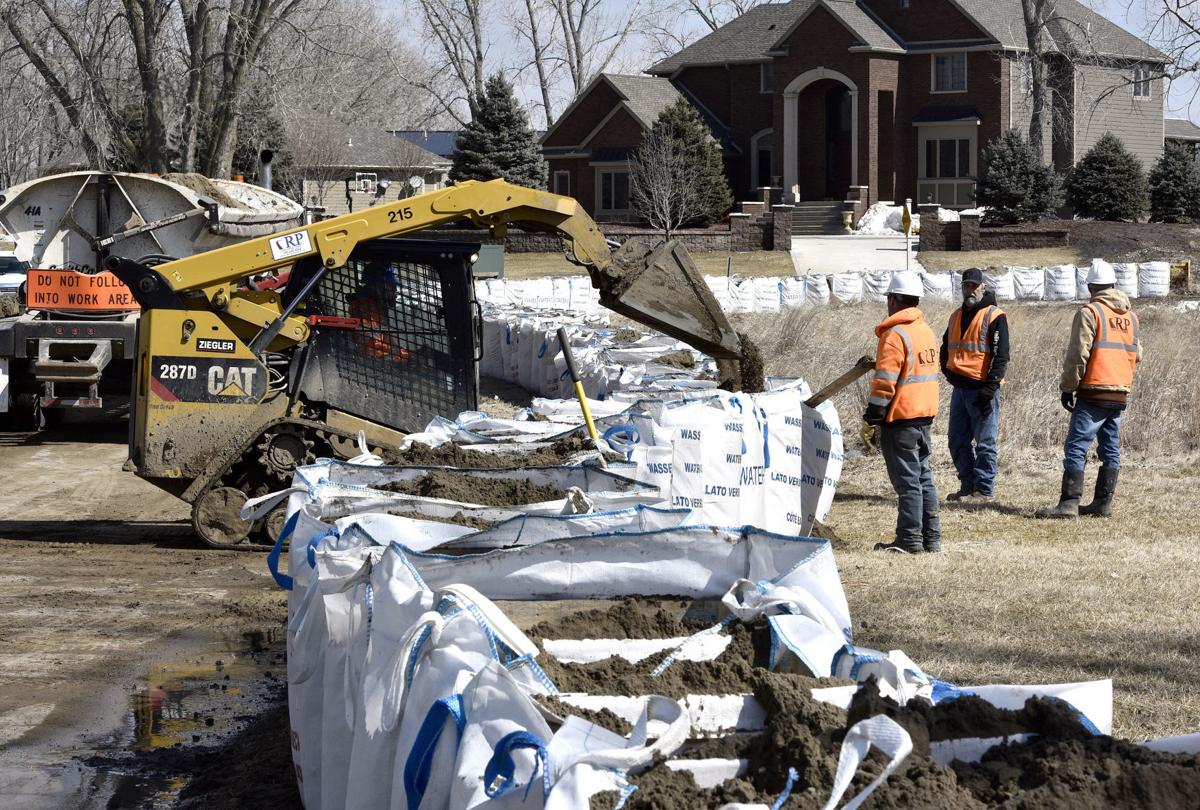 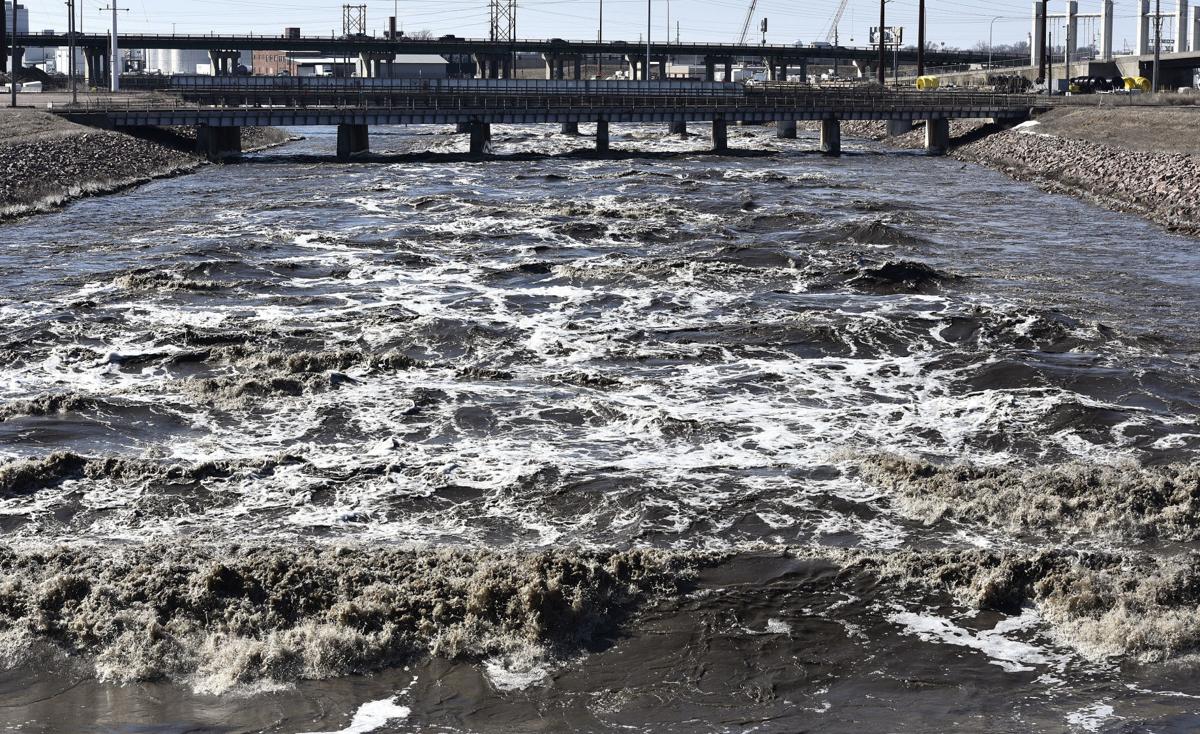 SIOUX CITY -- Drew Noel said the levees protected his family's home on Pebble Beach Drive in Dakota Dunes during the unprecedented Missouri River flooding in the summer of 2011. On Friday, Noel was hopeful that the large square sandbags contractors in blaze-orange vests were filling along the property would do the same.

"It's a beautiful thing to live out here," Noel said from his driveway as a backhoe moved sand just feet away. "Sometimes, nature's beautiful; and sometimes, nature can throw you a curve ball."

Authorities on Friday morning warned hundreds of residents in southeast South Dakota to prepare to evacuate their homes in advance of rising floodwaters on the Missouri. Noel said his family was plugging floor drains and moving some items out of harm's way, but he didn't think they would need to evacuate. 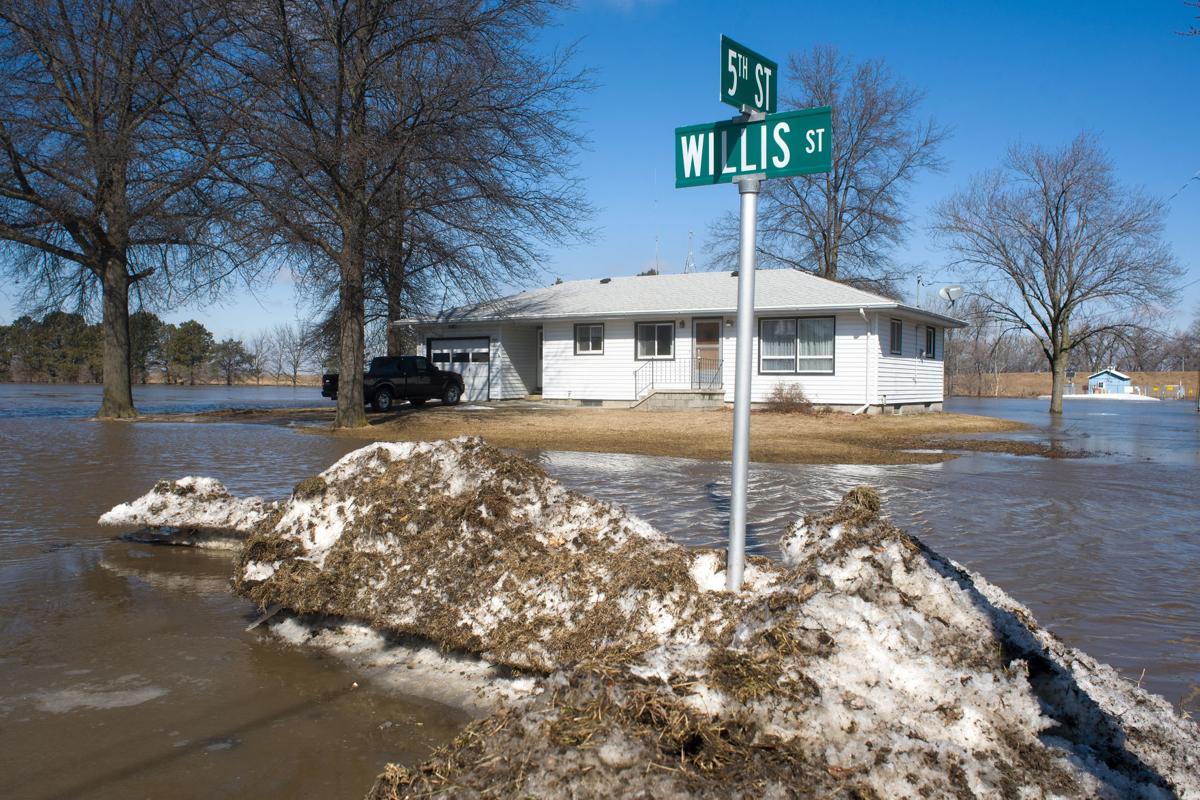 Flooding is shown on the 500 block of Willis Street in Pender, Neb., in this March 15 file photo. Nebraska state emergency officials who faced record floods this year are now scrambling to boost their ranks with more workers to help residents recover and rebuild their communities. 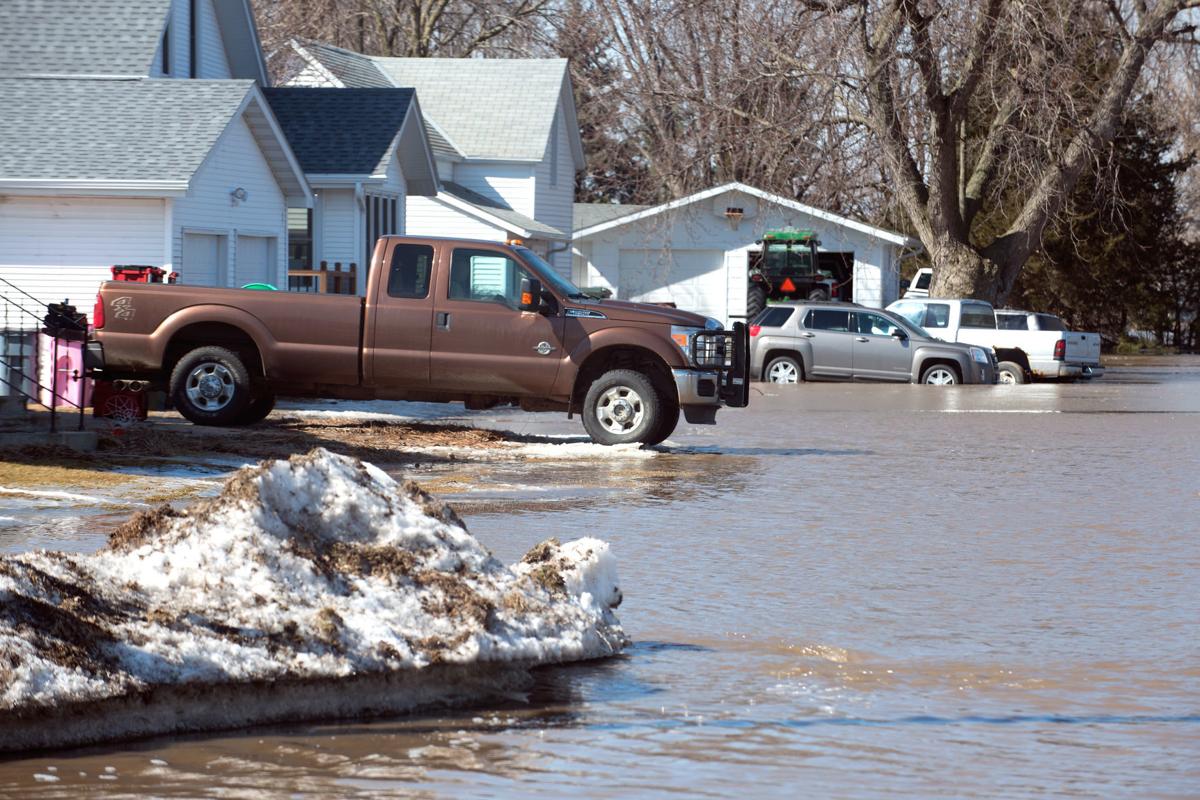 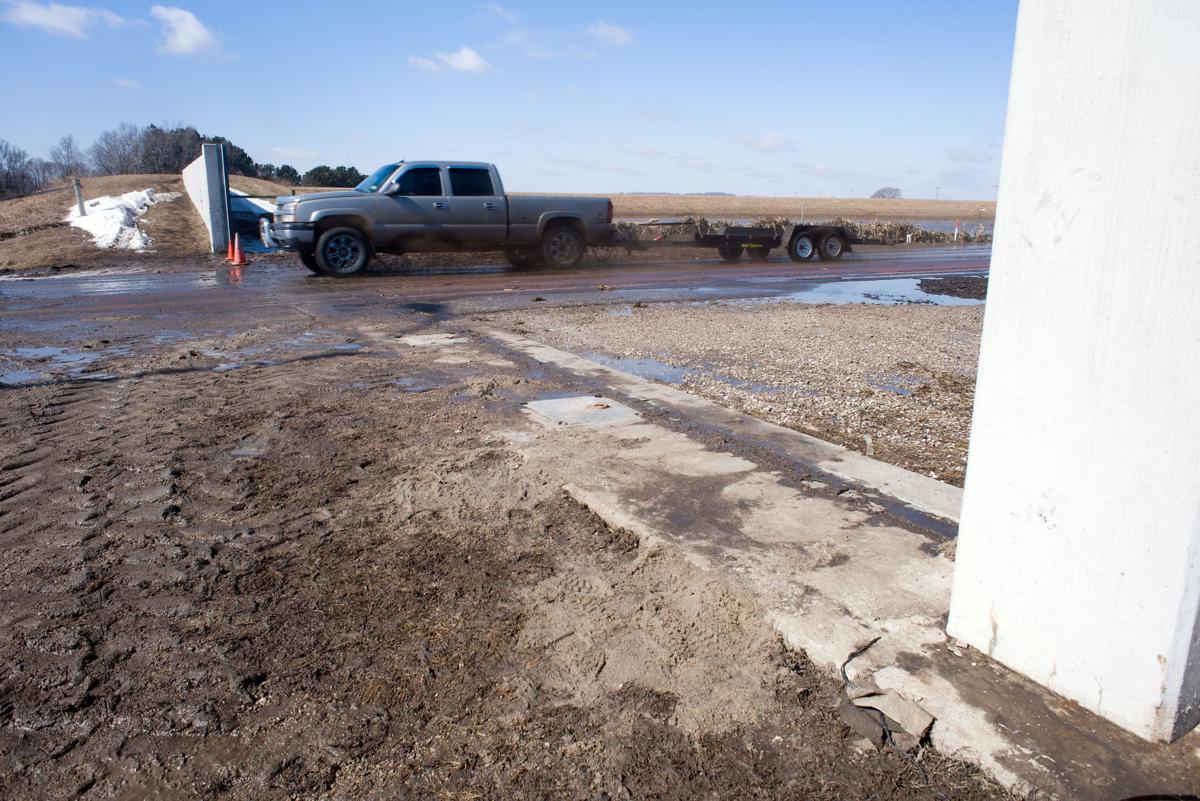 Traffic on Fourth Street flows freely after the north flood gate was taken down Friday morning in Pender, Nebraska. 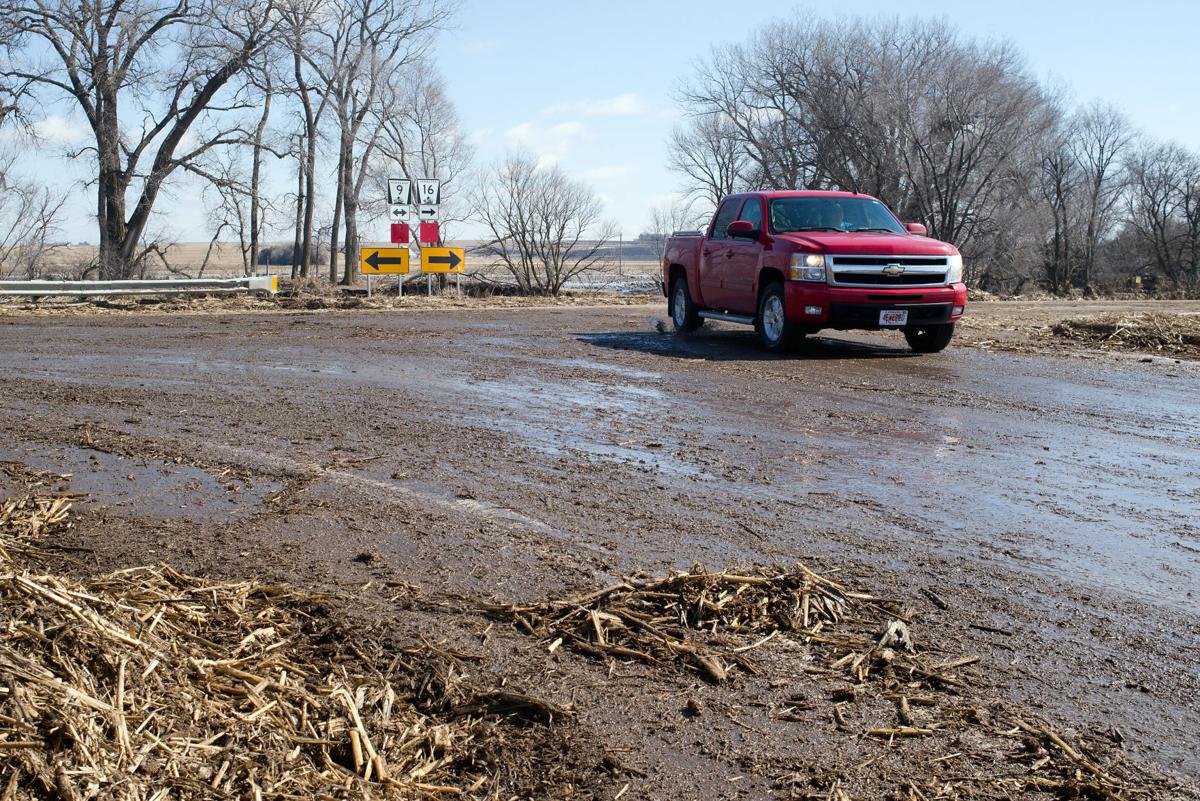 Mud and debris are seen on the road in Pender, Neb. on Friday, March 15, 2019. Sioux City Journal Photo by Justin Wan 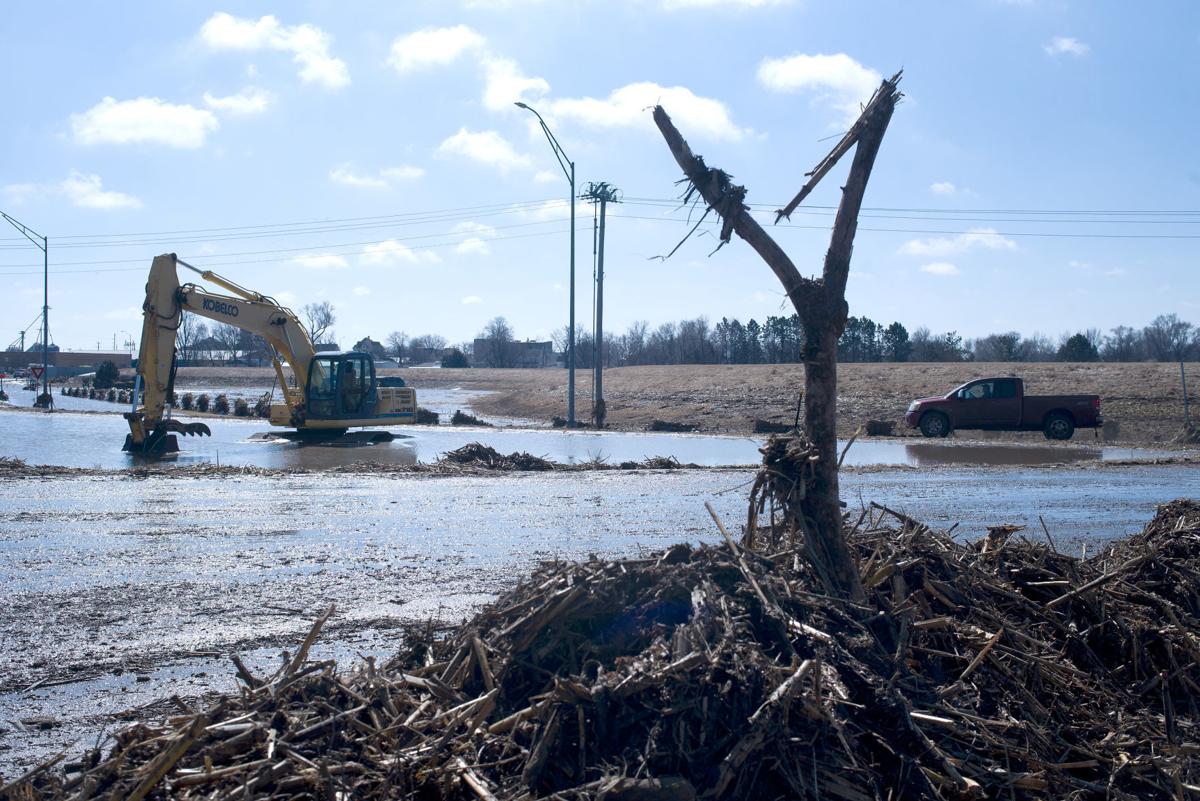 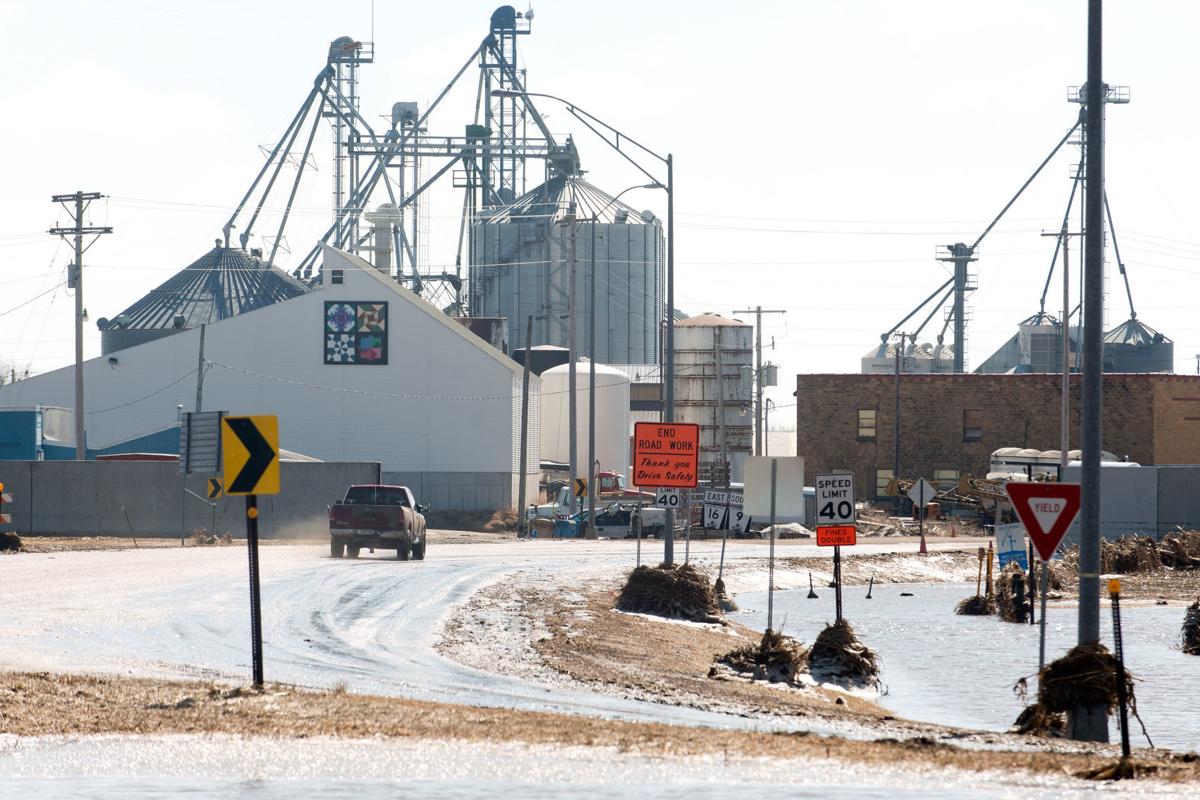 Traffic on Fourth Street flows freely after the flood gate was taken down earlier in the morning in Pender, Neb. on Friday, March 15, 2019. Sioux City Journal Photo by Justin Wan 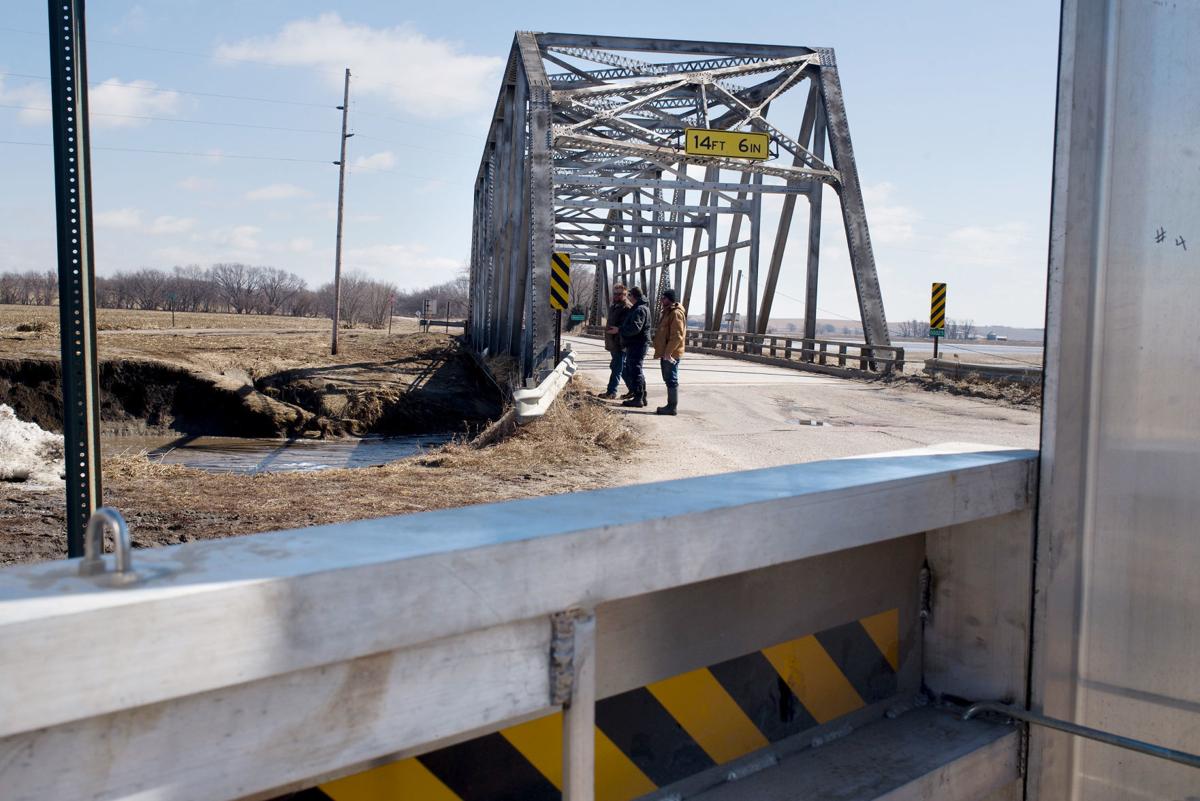 A bridge over Logan Creek on Nebraska Highway 94 just east of Pender, Neb., that had been closed since it was damaged by flooding on March 14 will reopen on Saturday. 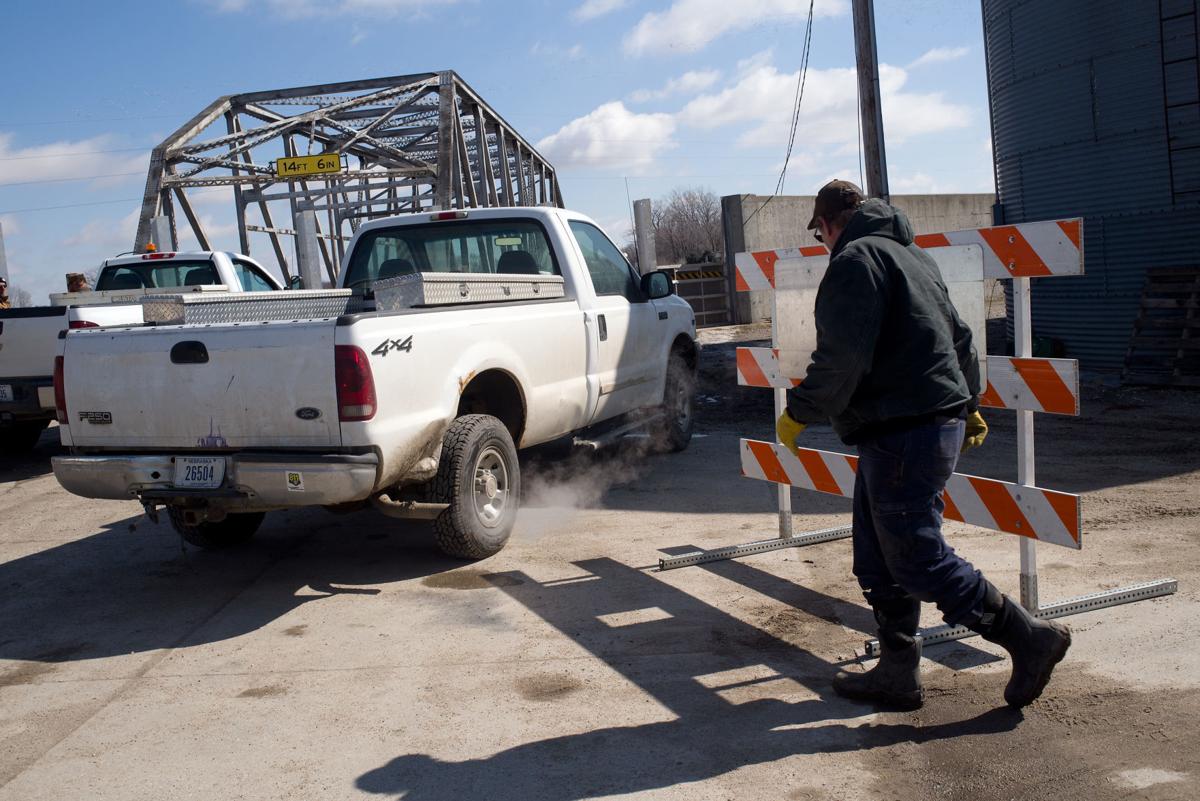 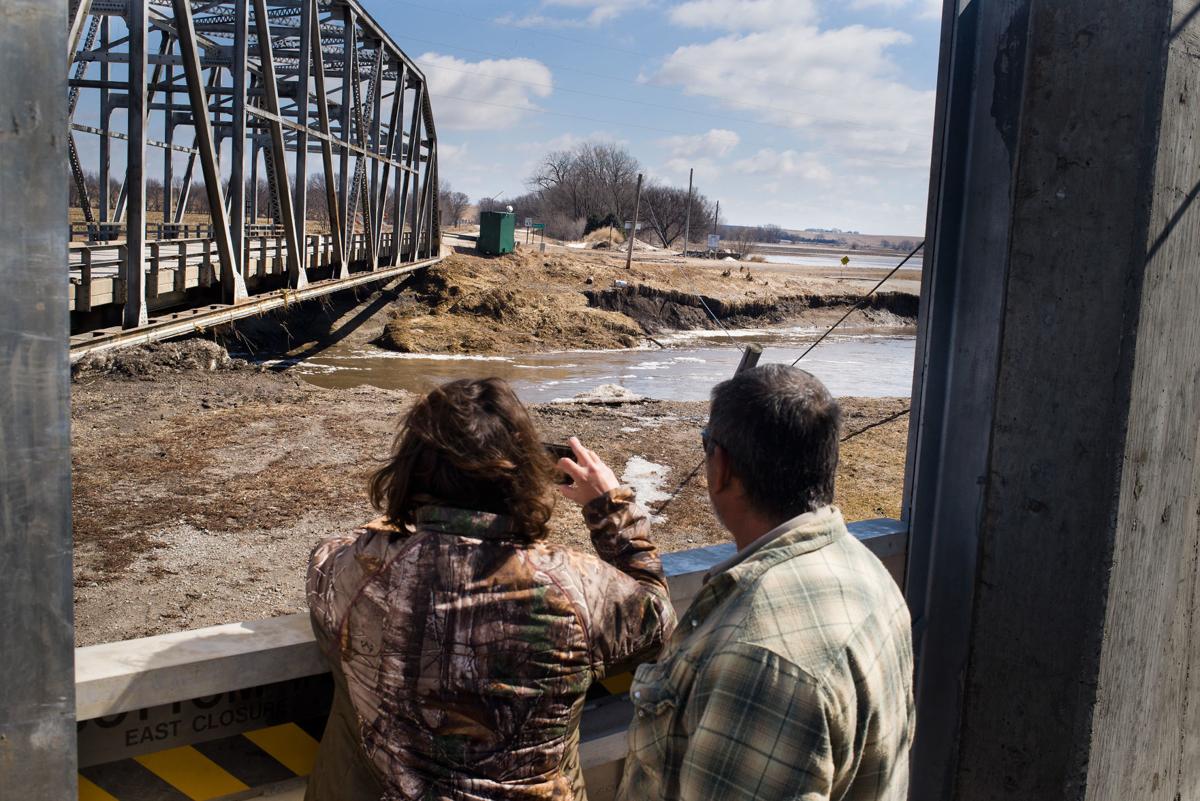 Crystal Scarlett and Loren Morgan of Pender, Nebraska take photos and inspect the damaged bridge on Main Street crossing Logan Creek Dredge in Pender on Friday. The village was virtually surrounded by flooding this week. The town's east flood wall will remain in place until a state mandated inspection of the damaged bridge is completed. The north flood wall was taken down Friday, allowing traffic on Highway 9 to reopen. 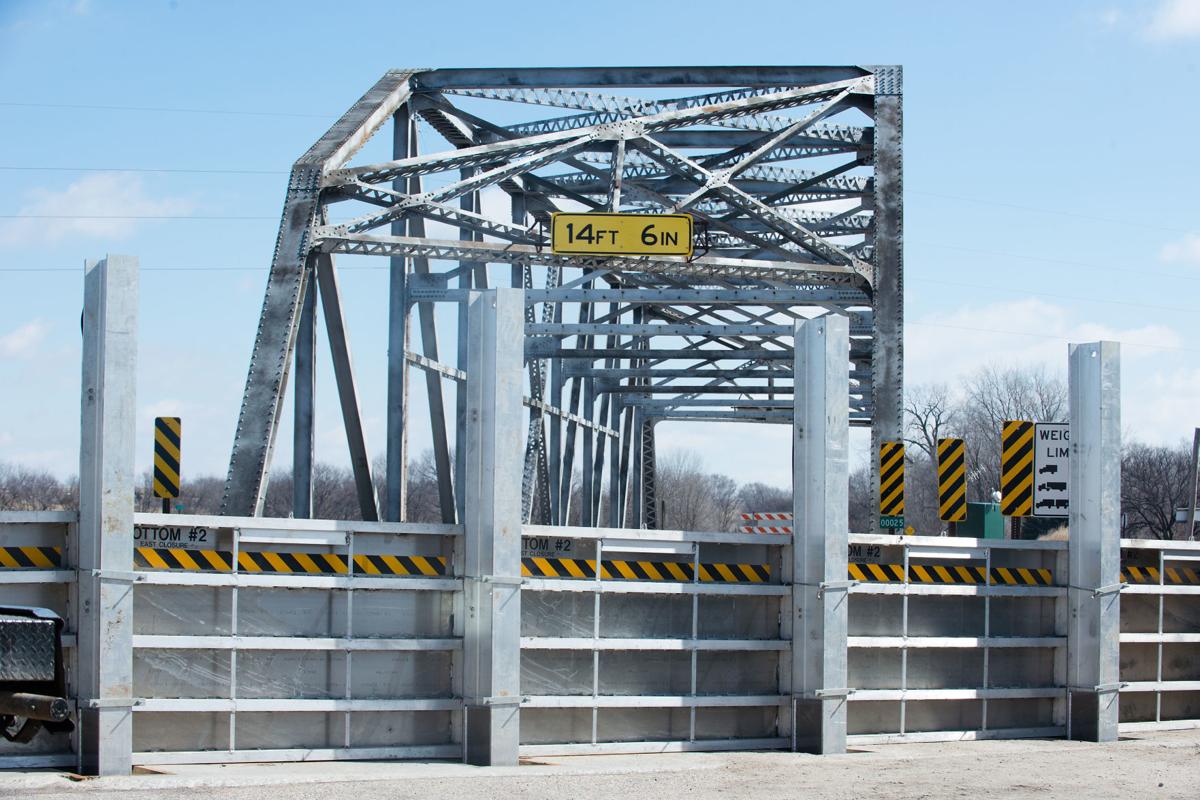 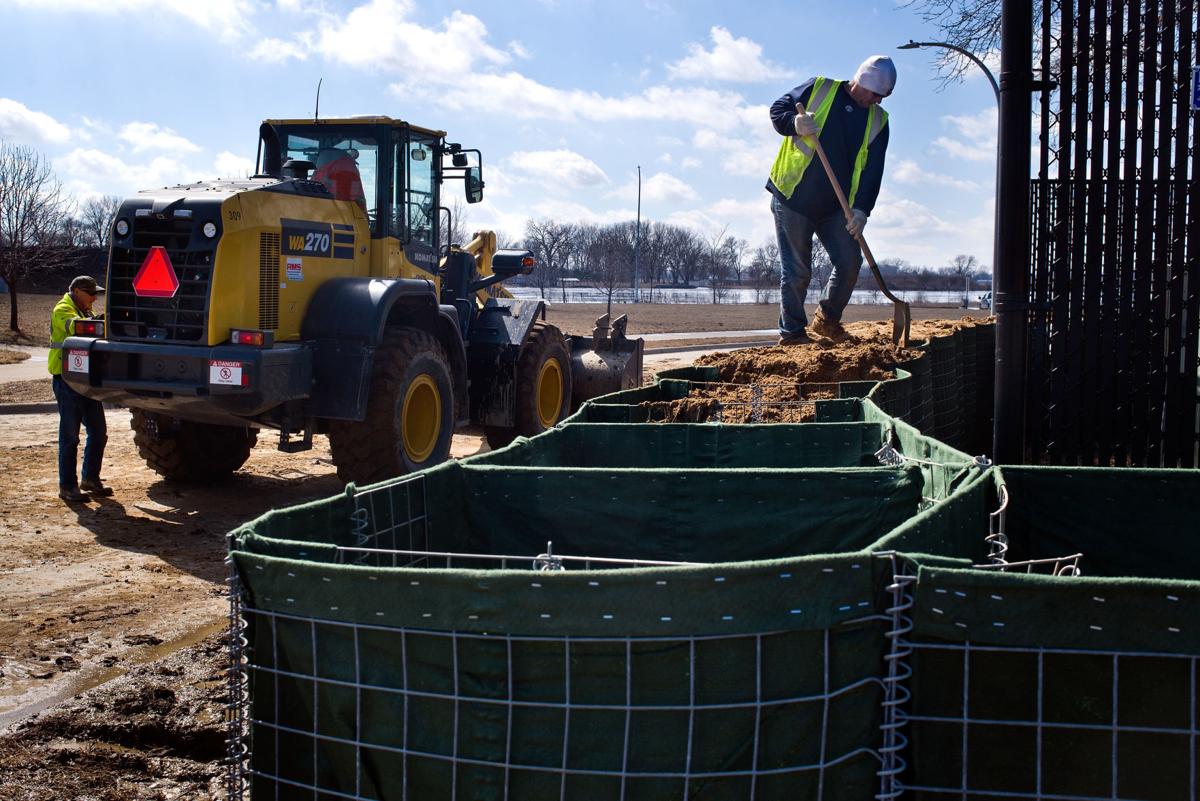 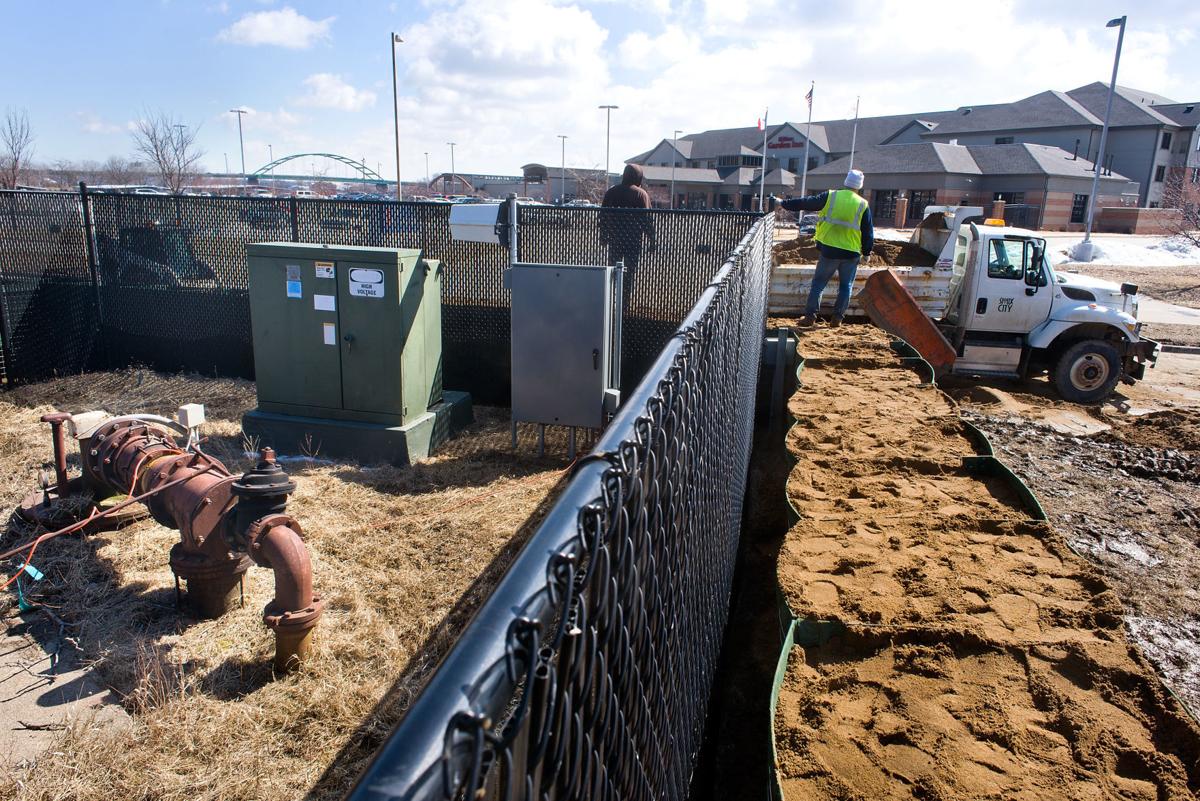 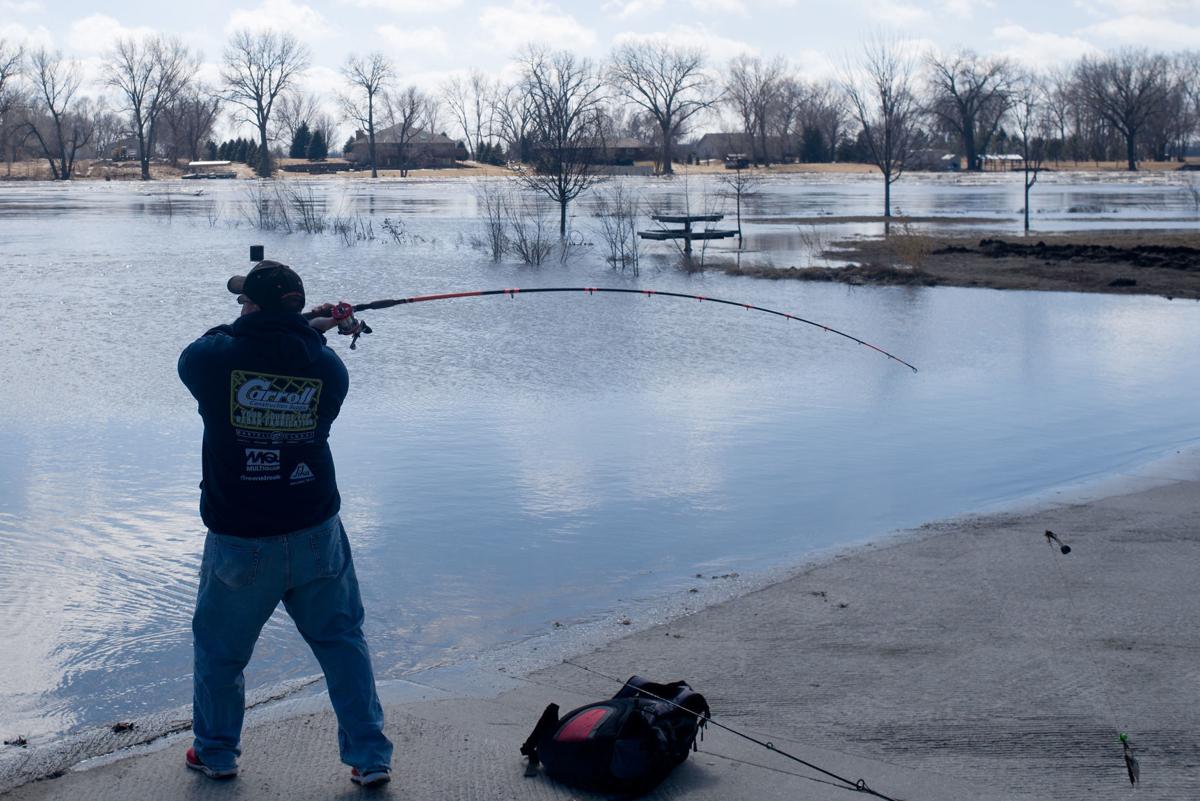 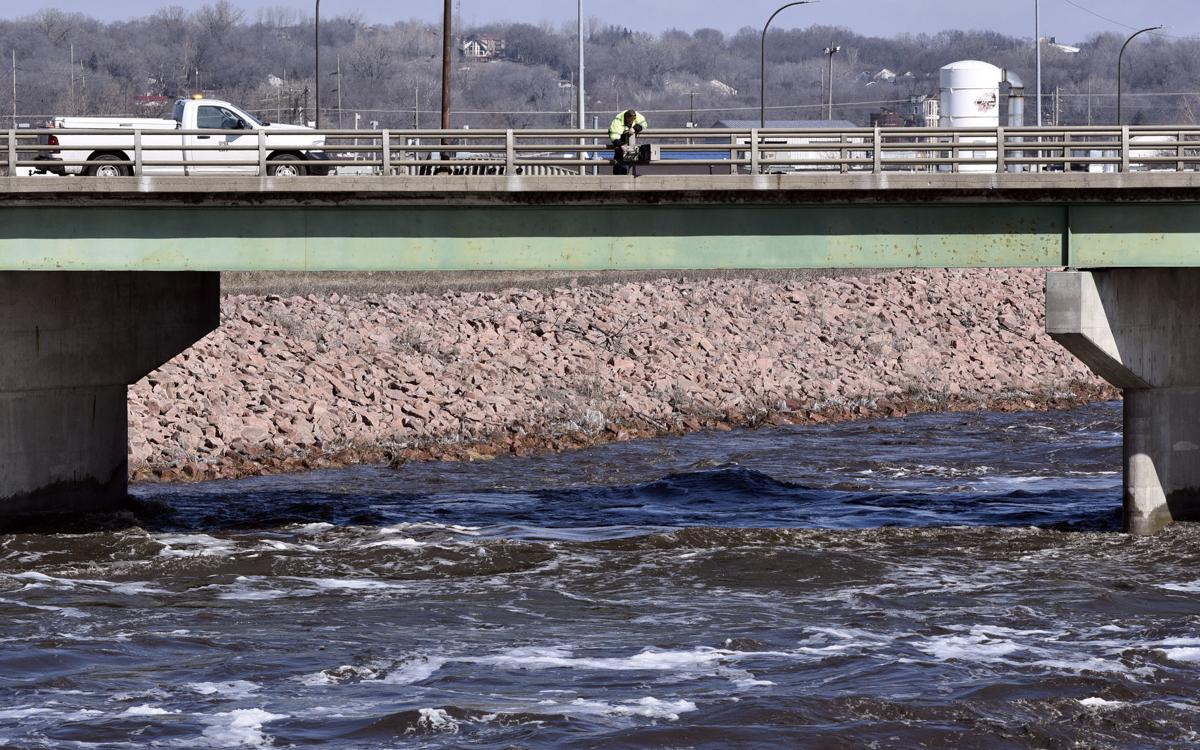 A city worker uses a gauge station on the Sixth Street bridge to measure the depth of the Floyd River in Sioux City, Iowa, Friday, March 15, 2019. The river is swollen from upstream floodwaters. 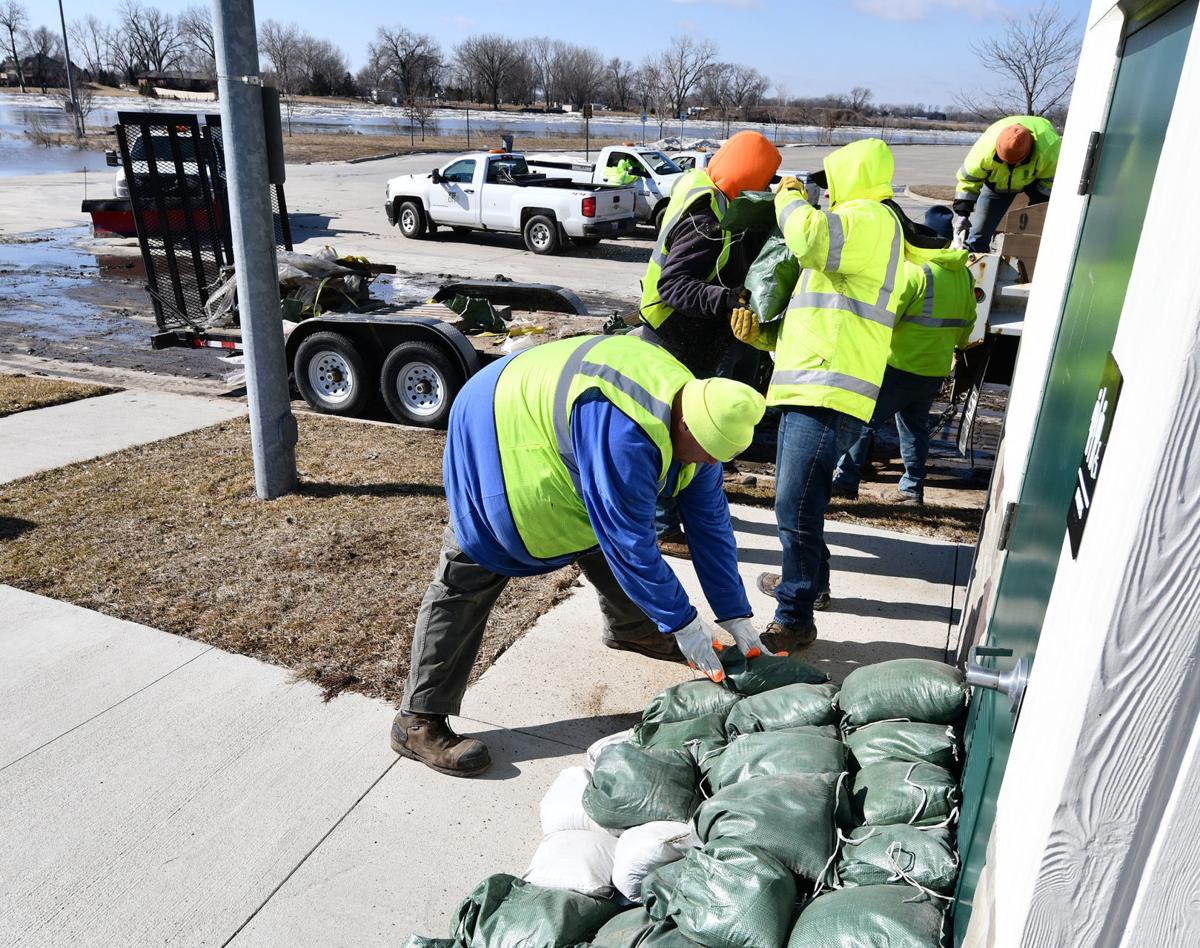 City workers sandbag a restroom near the Missouri River boat ramp in Sioux City's Chris Larsen Park Friday. Workers were shoring up infrastructure along the waterfront in preparation for possible flooding. Residents of Dakota Dunes and other residential areas in southeast South Dakota have been asked to prepare to voluntarily evacuate due to the rising river.

Local flooding fears escalated after the the U.S. Army Corps of Engineers increased flows from the upstream Gavins Point Dam to levels not seen since the 2011 flooding, which forced the four-month-long evacuation of hundreds of residents in the Dunes, an upscale planned community with dozens of lots fronting the Missouri.

Releases at the dam near Yankton have been raised to 90,000 per cubic feet to leave room in the adjacent Lewis and Clark Reservoir, which has filled due to snow melt and heavy rains on frozen, wet soils, and unanticipated runoff from uncontrolled tributaries.

The corps also was dealt a major blow Thursday when a dam near Spencer, Nebraska was breached. The dam plays a major role in controlling the Niobrara River’s flow into the Missouri River near Niobrara, Nebraska.

Because the high runoff, the corps since Wednesday has ceased releases from Fort Randall Dam, the next dam upstreams from Gavins Point, to reduce impacts below the Yankton dam.

Based on the new upstream releases, authorities believe the Missouri River may reach elevations of 1,092 to 1,093 feet at Dakota Dunes and 1,096 to 1,097 feet in the Wynstone development this weekend.

In Sioux City, the Missouri is forecast to crest at 30.8 feet late Saturday or early Sunday, just above the 30-foot mark when minor flooding typically begins.

Sioux City Fire Chief Tom Everett continues to monitor levels on the Missouri, which rose to 25.97 feet on Friday morning. Everett said "minor flooding" is expected along the riverfront.

Dana Livings, general manager of the Hilton Garden Inn Sioux City Riverfront, said Friday that sandbagging efforts were underway at the hotel and conference center, built along the shores of the Missouri.

"We do have some concerns. We're just keeping an eye on it and watching it every hour," she said.

On the Nebraska side of the river, South Sioux City Administrator Lance Hedquist said campers were being relocated from a portion of the riverfront Scenic Park Campground due to flooding worries.

"We have room for them to move to," he said of the camping rigs. "That's the only place that we foresee any problem."

Currently, the flooding is likely to last a few hours, Everett said, and may impact the Interstate 29 interchange at Hamilton Boulevard. He was quick to add that this won't be as severe or as long-lasting as it was when the river flooded in 2011.

"That year, the Missouri remained at 35 feet for a considerable amount of time," Everett said.

The fire chief said he also doesn't expect flooding from the Floyd River, Big Sioux River or Perry Creek, three other waterways that flow through the city. Though the Big Sioux is above flood stage upstream, he added the Riverside neighborhood should not see any flooding impacts.

Still, Everett said people should avoid the riverfront for the next several days as the city and Woodbury County Emergency Management continue to implement precautions.

Those precautions include filling a berm at the Lewis & Clark Interpretive Center and adjoining Betty Strong Encounter Center, according to facilities manager Mike McCormick. McCormick said the interpretive center, a private nonprofit cultural complex built and sustained by Missouri River Historic Development, will be closed in the event of flooding.

During the 2011 Missouri River flooding, releases from Gavin, the smallest of the six upstream dams, corps peaked at a record 160,200 cubic feet per second. That shattered the record of 70,000 cfs set in 1997. That means this week's releases are now the second highest on record.

Correction: An earlier version of this article misstated the ownership of the Lewis & Clark Interpretive Center and adjoining Betty Strong Encounter Center. The private nonprofit complex was built and is sustained by Missouri River Historic Development.

CHEROKEE, Iowa -- The Little Sioux River comes out of its banks in many years, so it's a notable benchmark of the severity of Siouxland floodi…