In this photo provided by the Minnesota Department of Natural Resources, an adult emerald ash borer is shown. The pest has been found in 52 Iowa counties. 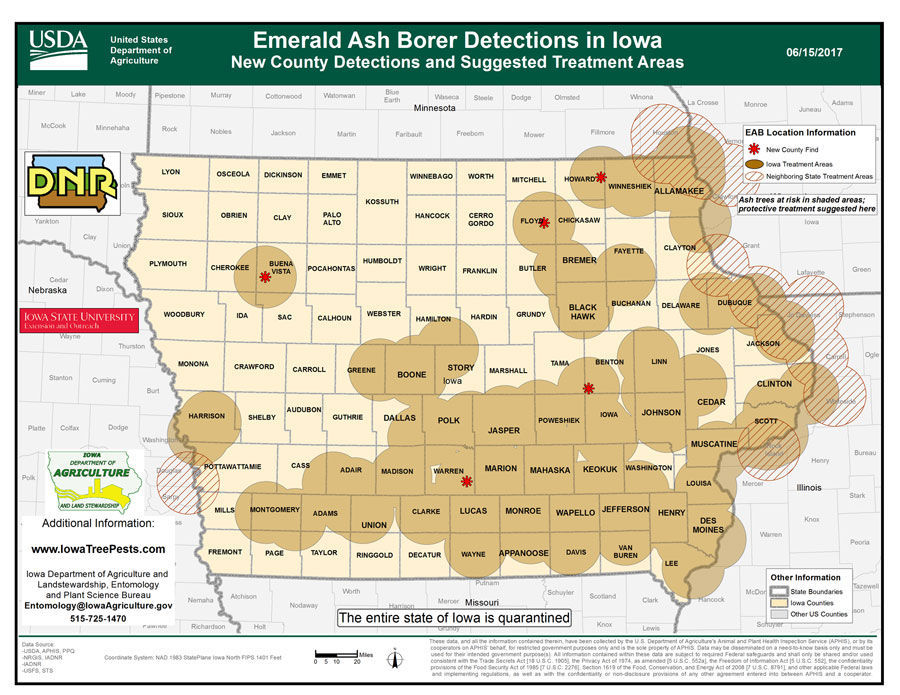 Greg Johnson, director of the county's conservation board, said the insect, which attacks and kills ash trees, was found in a single tree in Alta -- a city of 2,000 about six miles northwest of Storm Lake.

The previous closest case to Northwest Iowa was in Harrison County, just north of Omaha-Council Bluffs.

“This is traditionally the time of year we experience an increase in calls from Iowans suspecting EAB infested trees,” said Mike Kintner, Iowa Department of Agriculture and Land Stewardship EAB and gypsy moth coordinator.

Insect samples were submitted from these sites and positively identified by the U.S. Department of Agriculture, he said. The adult beetle is metallic green in color and measures about one-half inch long and can be observed during the summer months.

Infected trees usually lose leaves at the top of the canopy and the die-off spreads downward. The trees usually die within four years. The insects have killed tens of millions of ash trees and have been confirmed in 30 states. They are native to Asia and were first reported in the U.S. in Michigan in 2002. The insects were first detected in Iowa in 2010.

A federal quarantine restricts movement of hardwood firewood and ash articles out of Iowa into nonquarantined areas of other states.

The Associated Press and the Journal's Des Moines Bureau contributed to this report.

SIOUX CITY | A mother and her three young children were rushed to the hospital Wednesday after their vehicle flipped multiple times on Interstate 29.

SIOUX CITY | An 80-year-old man was injured when a pickup truck hit him while he was driving a riding lawn mower Wednesday.

GEORGE, Iowa | A man, who was allegedly drunk, drove his pickup into a road grader outside of George Tuesday.

ALTA, Iowa | To the untrained eye, all but one of the ash trees lining a certain city block in Alta appear to be normal.

In this photo provided by the Minnesota Department of Natural Resources, an adult emerald ash borer is shown. The pest has been found in 52 Iowa counties.