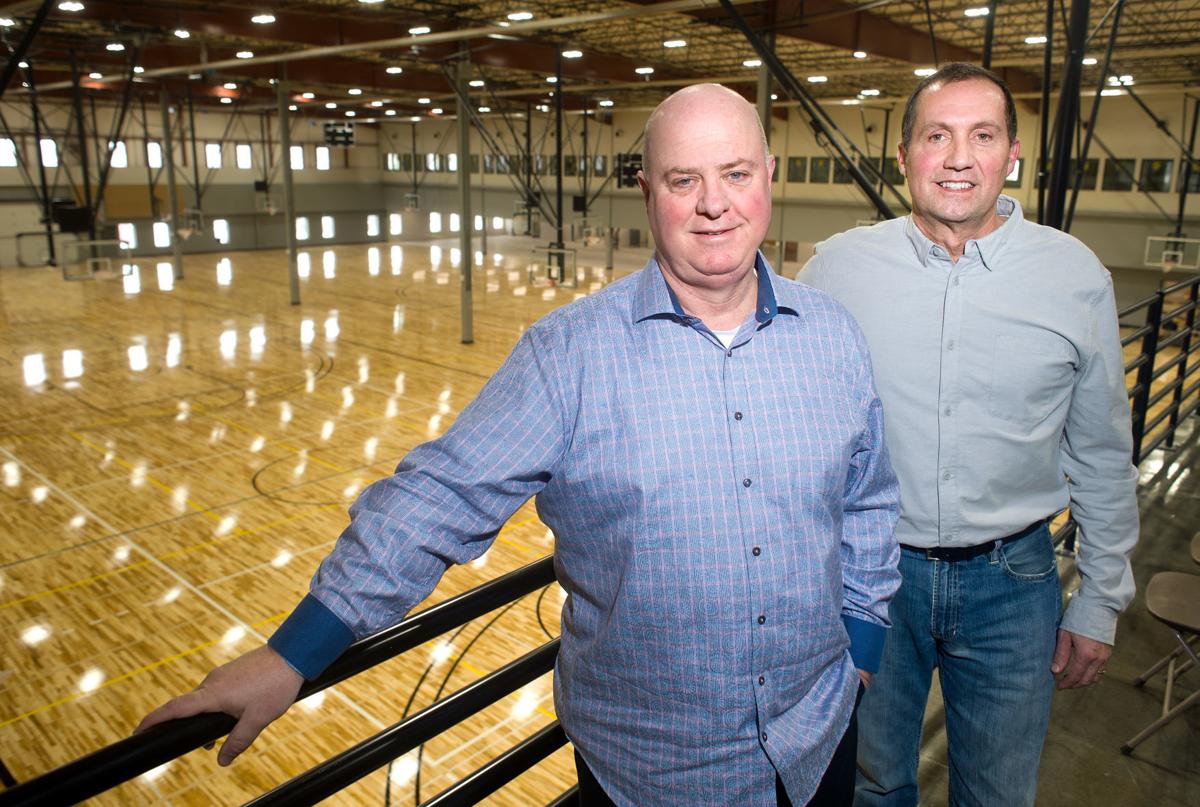 Partners Doug Skinner, left, and Bart Connelly stand on the mezzanine above the sports courts at United Sports Academy. The academy is located in North Sioux City in the former Argentina building that was part of the Gateway computers campus. 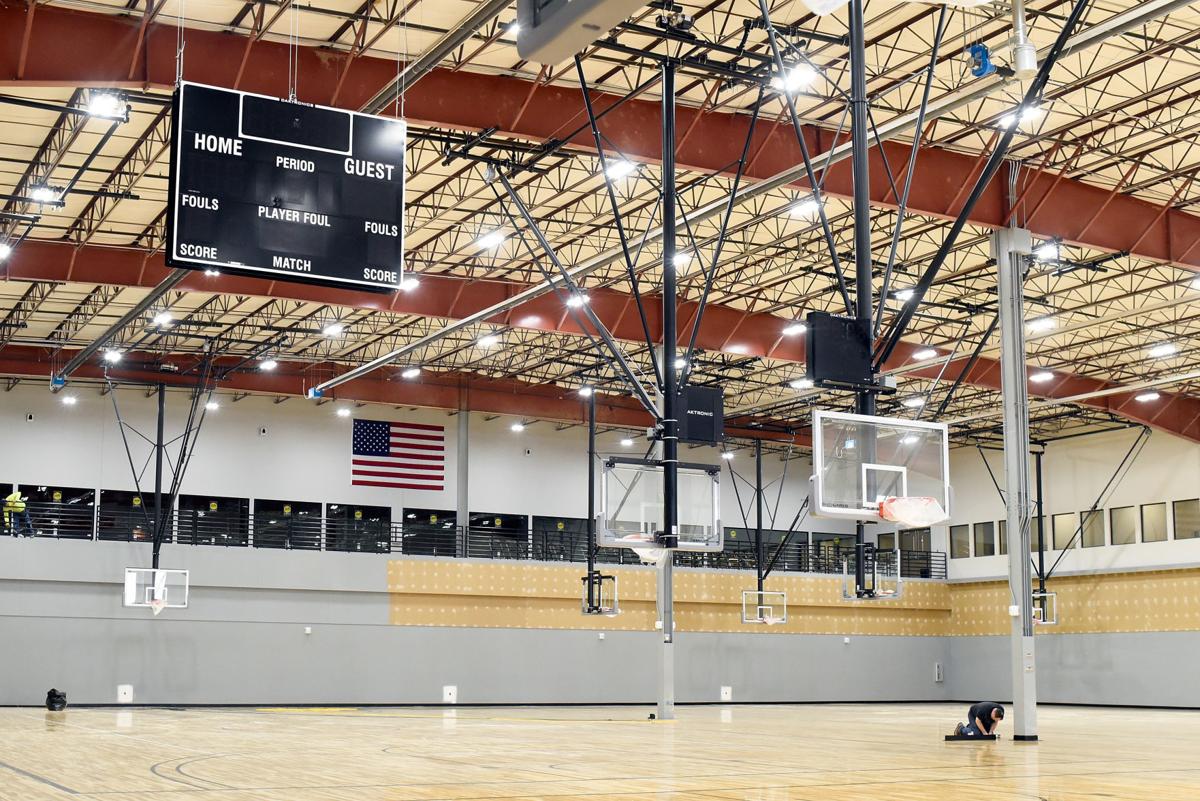 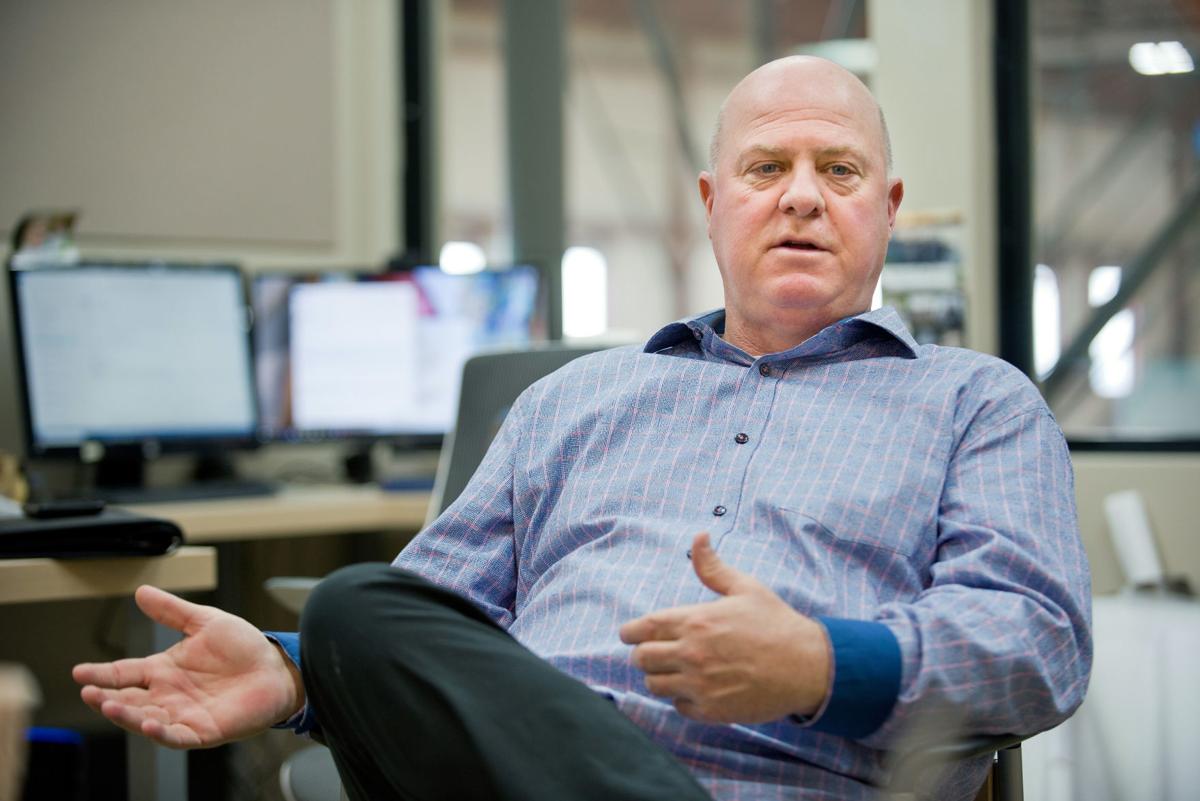 United Sports Academy partner Doug Skinner said that by year three, it's hoped that the North Sioux City facility will be hosting a tournament or other event every weekend and drawing half a million people to the area annually. 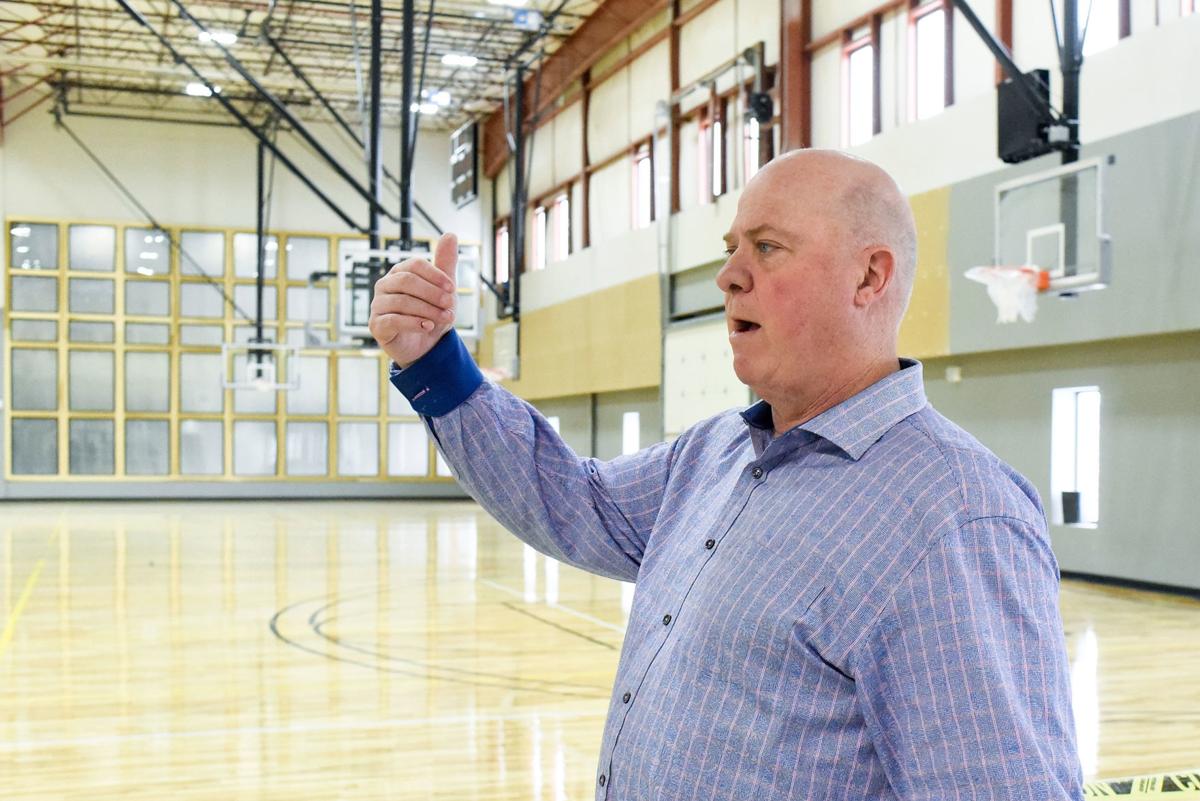 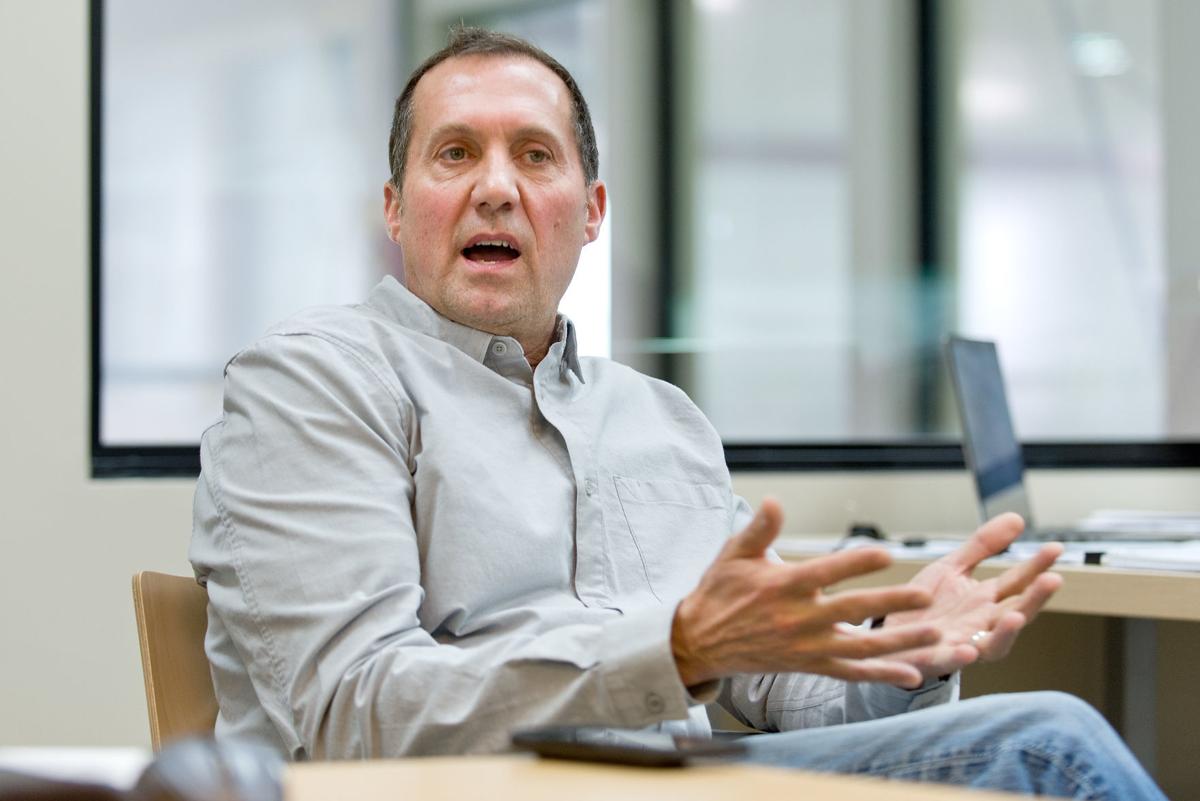 NORTH SIOUX CITY -- During the winter months and basketball season, Don Craig settles for any time he can get on a court for his club volleyball teams.

His players often must wait until after high school basketball teams have finished practice before they can get on the court at Siouxland Christian School. If there's a game, forget it.

"We kind of get what's left. I think court space is at a premium in the Sioux City area and in surrounding schools," said Craig, director of Assist Volleyball Club in Sioux City.

Craig and other club volleyball and basketball coaches have a spacious new option now, one that offers plenty of space, the ability to schedule regular practices and a chance to cut down on travel to out-of-town tournaments.

Academy developers Bart Connelly and Doug Skinner said four local sports clubs already have committed to using the facility as their home base and more are expected.

"This is a place for club sports in the community to come together and share a facility," said Connelly, of Connelly Development, which has redeveloped numerous historic buildings in Sioux City among other projects.

Both Connelly and Skinner have had children involved in club sports and know first-hand how hard it can be to find practice space in the Sioux City area. They're also familiar with the hours of travel to tournaments across the Midwest. United Sports Academy will be able to host several tournaments, cutting down on the time Siouxland families spend on the road.

"I've been a coach for 13 years, in the club system for 10, and it's needed here," Connelly said. "We've spent a lot of money in a lot of cities and we'd like to keep some of that here."

Workers earlier this week were still putting the finishing touches on the wood floors on the courts. The cafeteria-style seating adjacent to the concession stand was not yet in place and painters were busy, but all was expected to be ready by Saturday morning, when nine teams are expected for a 10th-grade volleyball tournament.

The facility also will feature changing and locker rooms, offices for coaches and referees and an arcade. A second phase to be completed later this year will add a health club and performance training center, two golf simulators and corporate event space with a bar and food service.

Connelly said he's been looking to develop a sports academy since 2010. He had identified possible locations in the metro area, but the Argentina building, which Connelly bought in January 2018, made the most sense.

"Until this building was purchased, all the pieces couldn't be put together," Connelly said. "The physical aspects of this property set this property apart."

Before construction could begin in May, workers removed dozens of cubicles from the call center that had previously been located in the building. Much of the second floor was removed, creating an open space two stories high to accommodate the playing courts.

Many of the 24 basketball hoops can be lowered to a height of 8 feet for youth practices and games. Skinner said the courts will be open for clubs to use for practice and skills training. The courts are open in time for basketball clubs to hold tryouts in March.

Many of those players are local kids who would otherwise be going to Sioux Falls, Omaha or elsewhere for tournaments and workouts, and it will be nice for them to be able to stay home to play and practice, Skinner said.

"The bigger piece is all those kids that we have come in here won't have to travel to get the same experience and training," Skinner said.

The academy will be a membership-based business, Connelly said, but the exact organization and structure likely will morph over time. So will the ways the facility is used.

Four pickleball courts are marked on the wooden floors, and there is interest in having wrestling, indoor soccer, archery and many other sporting events in the building. There's room to expand and add more courts in the future.

"It's a multi-use facility. It's not just to house a narrow focus. We're looking at the future and how we can expand this," Connelly said.

Connelly and Skinner hope that by year three, United Sports Academy is hosting a basketball or volleyball tournament or some other sporting event every weekend. With that kind of activity, half a million people, many of them from out of town, could be visiting the facility annually, providing a big economic impact, Skinner said.

For coaches and club directors like Craig, they're anticipating the savings from being able to host tournaments rather than travel to them.

"We can draw teams and families to Sioux City and show them what a great community we have," Craig said.

For more information about the United Sports Academy, located in the former Argentina building on the Gateway campus at 300 Centennial Drive in North Sioux City, visit the website at www.usportsacad.com.

Those interested in seeing the facility may attend a volleyball tournament Saturday free of charge.

A house of peace opens near Newcastle

NEWCASTLE, Nebraska -- The Rev. Jim Kramper moved into his dream home near Newcastle during the fall.

SIOUX CITY -- Matt and Lindsey Rixner are the parents of a seemingly improbable family: two sets of twins, both born in October.

SERGEANT BLUFF -- When Tyler Hanson was 5 years old, his mom, Amie, told him he was adopted.

SIOUX CITY -- Creation of a new Bishop Heelan High School gymnasium was delayed, so "The Pit" had one additional winter for hosting Crusader b…

SIOUX CITY – The proposed Siouxland Expo Center headed toward the construction phase Monday as the $12.7 million venue secured some of the fin…

NORTH SIOUX CITY -- After years of sitting dormant, the former Gateway campus in North Sioux City has been revived.

The developers released new renderings Monday that depicted the courts and The 712 Sports Grille, an eatery that will overlook the courts. The main arena will seat more than 3,500 people.

Developer Bart Connelly said construction will begin soon on the first home, a speculative, 1,950-square-foot residence. It will be listed at $389,000.

Built Technologies will create a new division, Built for Contractors, led by lienwaivers.io CEO Geoff Arnold. The company launched in 2015 to increase  "efficiencies and trust in the construction payment process," Arnold said.

Innovive, headquartered in San Diego, purchased 367,000 square feet of advanced manufacturing and distribution space. The company now owns Gateway's former Mexico and Peru buildings, as well as 14 acres of bare land on the south end of the campus.

Partners Doug Skinner, left, and Bart Connelly stand on the mezzanine above the sports courts at United Sports Academy. The academy is located in North Sioux City in the former Argentina building that was part of the Gateway computers campus.

United Sports Academy partner Doug Skinner said that by year three, it's hoped that the North Sioux City facility will be hosting a tournament or other event every weekend and drawing half a million people to the area annually.