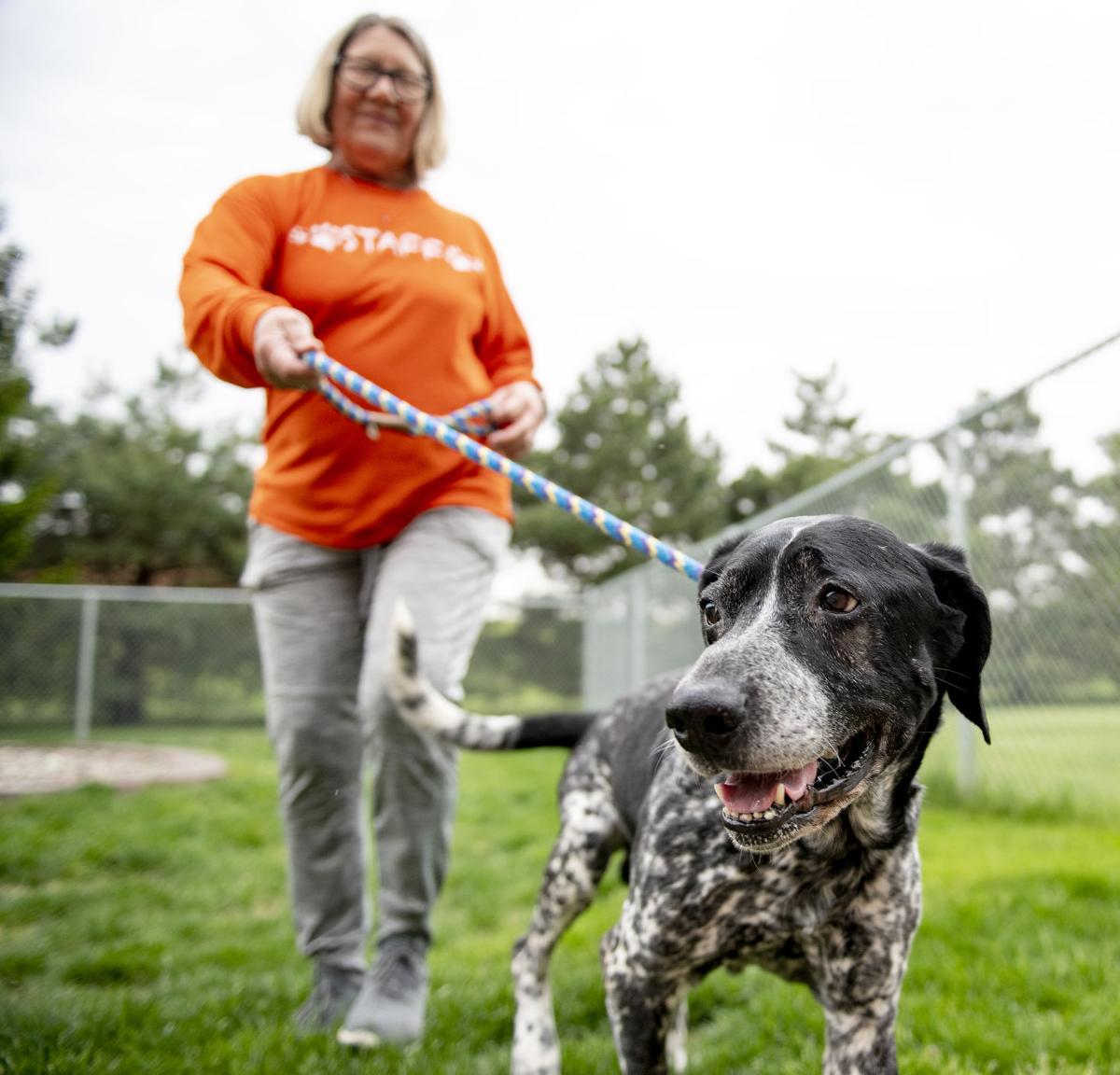 Cheryl Derby leads "Broadway," a 13-year-old Labrador Retriever-Blue Heeler mix, around the backyard of the Siouxland Humane Society on Saturday, May 16, 2020. Broadway was one of only three dogs at the shelter this weekend. 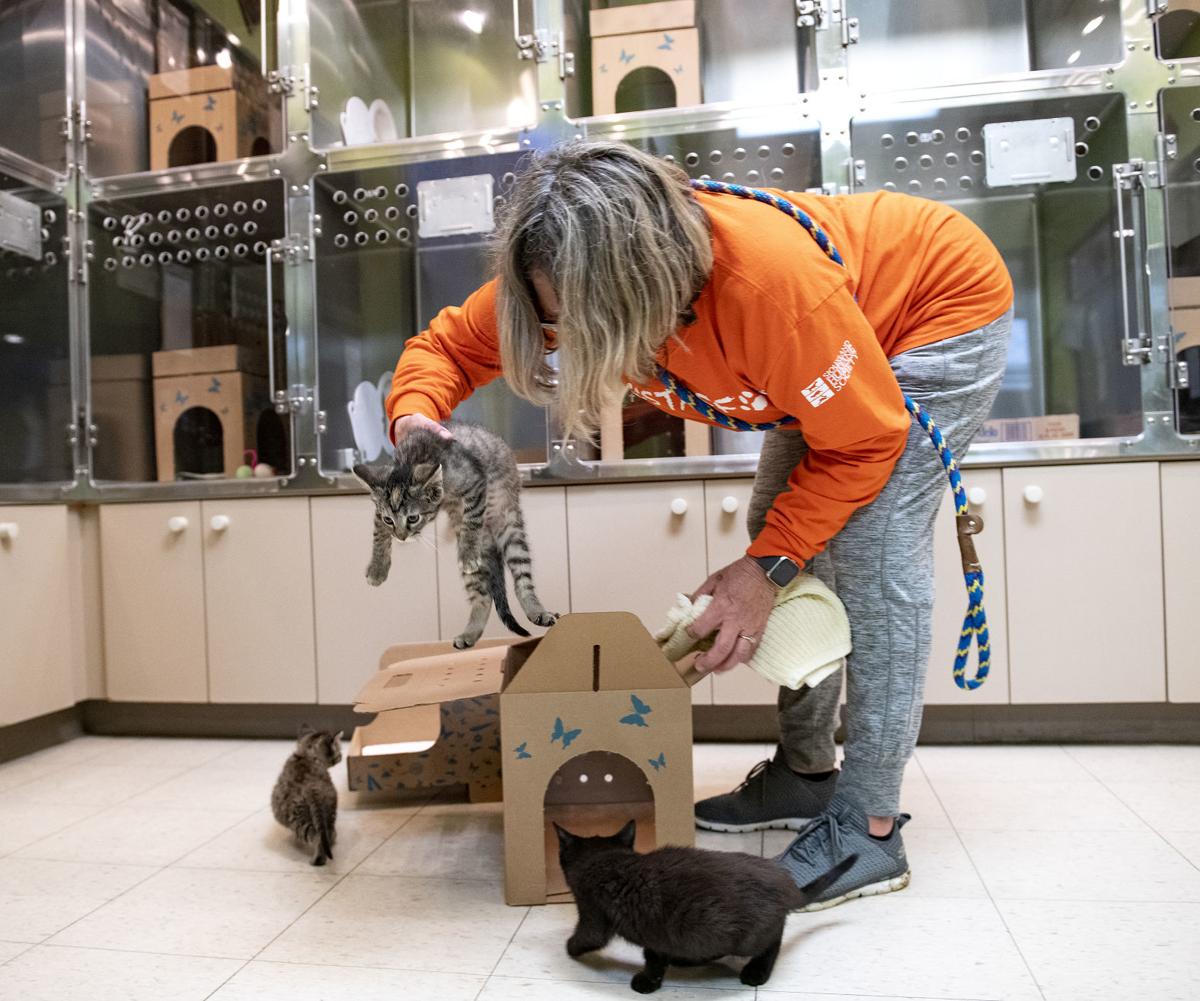 Cheryl Derby takes out Domestic Shorthair kittens at the Siouxland Humane Society on Saturday, May 16. As of this weekend there were only nine cats at the shelter, a small fraction of their normal feline population. 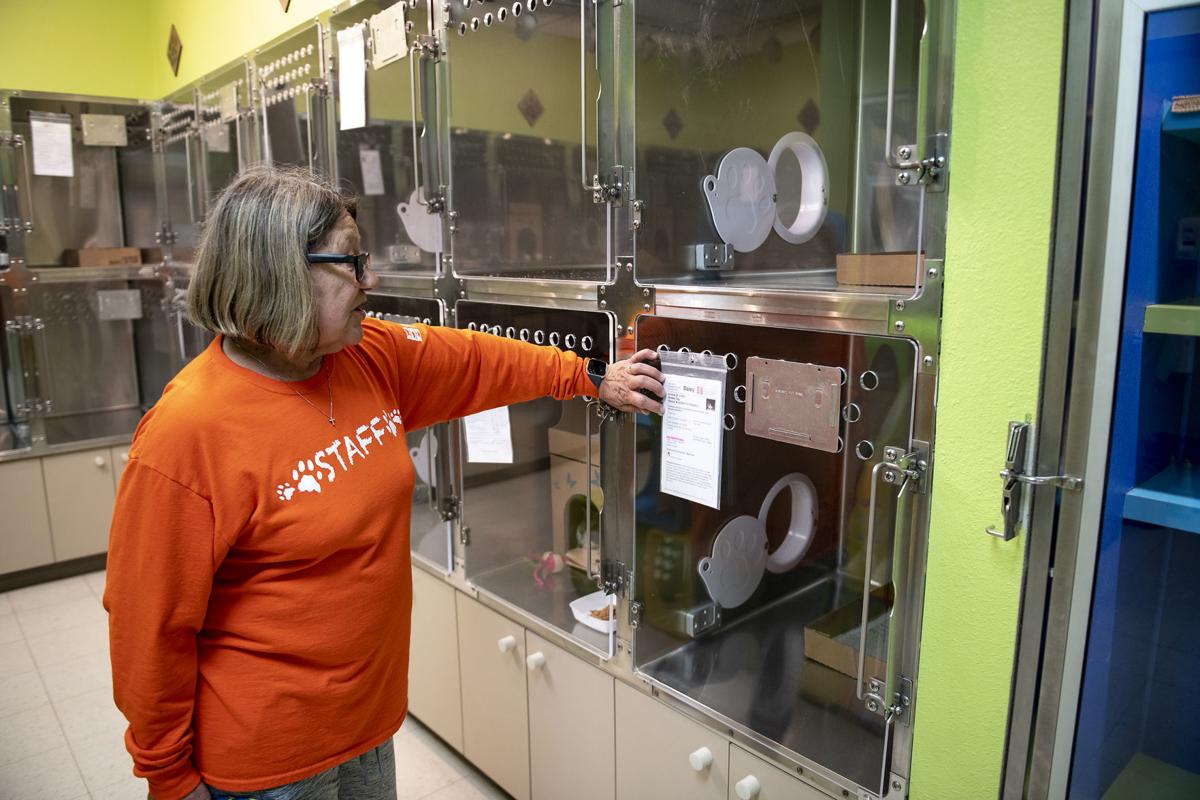 Cheryl Derby talks about the nine cats available for adoption at the Siouxland Humane Society on Saturday, May 16. The shelter has fewer animals than normal at present, and they've restricted human visitors in an effort to stem the risk of COVID-19 infection.

SIOUX CITY -- A roughly 13-year-old black-and-white spotted Labrador and Blue Heeler mix called "Broadway" was one of only three dogs available for adoption at the Siouxland Humane Society this weekend.

His fellows at the shelter are "Rowdy," a 5-month-old Australian Shepherd, and "Gracie," a 2-year-old lab mix. And that's all there is.

Cats, normally plentiful at animal shelters, are also in unusually short supply -- there were only nine available on Saturday, including some kittens.

Jerry Dominicak, the shelter's director, said the shelter would normally have 10 to 20 dogs and as many as 40 to 50 cats. COVID-19 has, to an extent, played a role in the reduced number of animals there.

"We're probably seeing, about 50 percent of the animals that would normally get surrendered to us surrendered, which, that very likely could be that kids are out of school and home, and some people have been laid off and home and there's more time for pets," Dominicak said. "So they're keeping pets. May also be that vacation plans have been canceled, because a lot of times vacations and holidays, people dump pets at shelters."

How the shelter came to have so few animals is also part of a broader story of pets in the U.S. -- it's far more popular today to get animals from shelters than in decades past, and Dominicak said that Midwesterners have, for one reason or another, gotten on board with spaying and neutering their animals.

The number of animals being left at shelters was already in decline before the pandemic left people at home, needing the dog for company. According to ASPCA statistics, the number of dogs and cats entering shelters declined from 7.2 million in 2011 to around 6.5 million per year more recently. The number of dogs in particular has been on the decline, and litters of abandoned puppies are now comparatively rare.

"Animal numbers are way down in shelters," Dominicak said. "Which in some respects is a very good thing."

Dominicak forecast that the number of cats, which are known to reproduce like the proverbial rabbits, will soon be on the upswing at the shelter. "I think our cat numbers are starting to pick up," he said.

The Siouxland Humane Society has taken some of its own initiatives to keep the animals in their homes rather than at the shelter. They've provided dog or cat food for those unable to afford it, along with some basic veterinary services like flea treatments.

The shelter has put in place some new COVID-19 restrictions -- walking in to view the animals without an appointment is no longer allowed. Potential adopters are screened to ensure they are serious about adopting, not just coming for a leisurely visit, and that they already have an animal in mind. Similarly to grocery stores' "one person" recommendations, the shelter is now discouraging entire families or large groups from visiting.

This, in all likelihood, has further contributed to the decline in adoptions.

"The week (after) school was canceled here in Sioux City, parents had nothing to do with kids, and we became a petting zoo. So, the kids were cooped up at home, there's nothing to do, let's go to the humane society and play with the animals," Dominicak said. This, of course, was problematic from a virus-prevention standpoint, so new rules were implemented.

On the plus side, the process of choosing an animal at the shelter has been greatly simplified by the small selection of dogs and cats available.

How Siouxland musicians, other artists are coping with COVID-19

At 82, Vermillion horse rider has no intention of retiring from competitions

"They keep asking me when I'm going to quit. I say 'I'm not dead yet,'" Harold Fischer says, chuckling heartily while sitting atop his quarter horse, Chic. If he actually retired, it would probably be bad for his health, he reasons.

Sioux City K9 Dax not likely to dog it in retirement

Like many new retirees, Dax has gone through an adjustment period. His days now are spent at home, getting out in the back yard each morning and going to a nearby hill to play ball later in the day. "It's got to be boring here for him," his longtime handler said.

In addition, the health department said there are 63 additional cases in Woodbury County, bringing the total case count to 2,278.

A little more than a month after recovering from the novel coronavirus, Mark McCormick took over interim operations of the Dakota Dunes facility. Read and see how he got here.

Mayor: Sioux City pools may not open this summer due to coronavirus

In a normal year, the Riverside Aquatics Center opens by Memorial Day weekend, followed by the Leif Erikson and Lewis pools in early June.

The husband-and-wife veterinarian team of Erin and Ben Schroeder will bring more of the dirt, blood and manure to the airwaves on May 30, when season two of their show, "Heartland Docs, DVM," premieres on Nat Geo Wild.

The governor said Iowa Department of Public Health data show a “dramatic” rise in testing over the past few weeks with the number of new positive cases declining and “the number of individuals testing negative is trending up.”

“We are seeing a stabilization,” the governor said in announcing that movie theaters, zoos, museums, aquarium and wedding reception venues will be permitted to reopen on Friday with appropriate public health measures in place.

DAKOTA CITY -- The Dakota County Health Department has reported one more person has died from COVID-19.

Sioux City swimming pools to remain closed due to COVID-19

City officials continue to explore options that would allow for swimming lessons and fitness classes at its pools. A decision is expected by June 2.

The teachers' cutouts concept is modeled on the children’s book "Flat Stanley." "When I got it, I felt very happy," one student said. "It is like my teacher is always with me when I have it."

The governor said the coronavirus pandemic has stabilized enough in Iowa for indoor movie theaters, zoos, museums, aquariums and wedding reception venues to resume operations Friday — but only with public health measures in place.

Summer fun options in Okoboji lessened due to coronavirus

Popular restaurants such as The Ritz, Taco House and Tweeter's will seat at only 50 percent of capacity. There will be no free weekend greenspace concerts in June. The classic roller coaster at Arnolds Park Amusement Park will use every other car.

AMC Southern Hills 12 and Promenade Cinema 14 have been shuttered since March 17, the day Gov. Kim Reynolds ordered indoor theaters and a number of other businesses to temporarily close in an attempt to slow spread of COVID-19.

"Online contributions are here to stay," one Northwest Iowa church leader said. "And so are services presented on Facebook."

Third annual Siouxland Big Give to provide platform to nonprofits

Hosted by the Siouxland Community Foundation on behalf of nearly 100 participating nonprofits, the 24-hour day of giving encourages community members to donate to their favorite local charities.

Cheryl Derby leads "Broadway," a 13-year-old Labrador Retriever-Blue Heeler mix, around the backyard of the Siouxland Humane Society on Saturday, May 16, 2020. Broadway was one of only three dogs at the shelter this weekend. 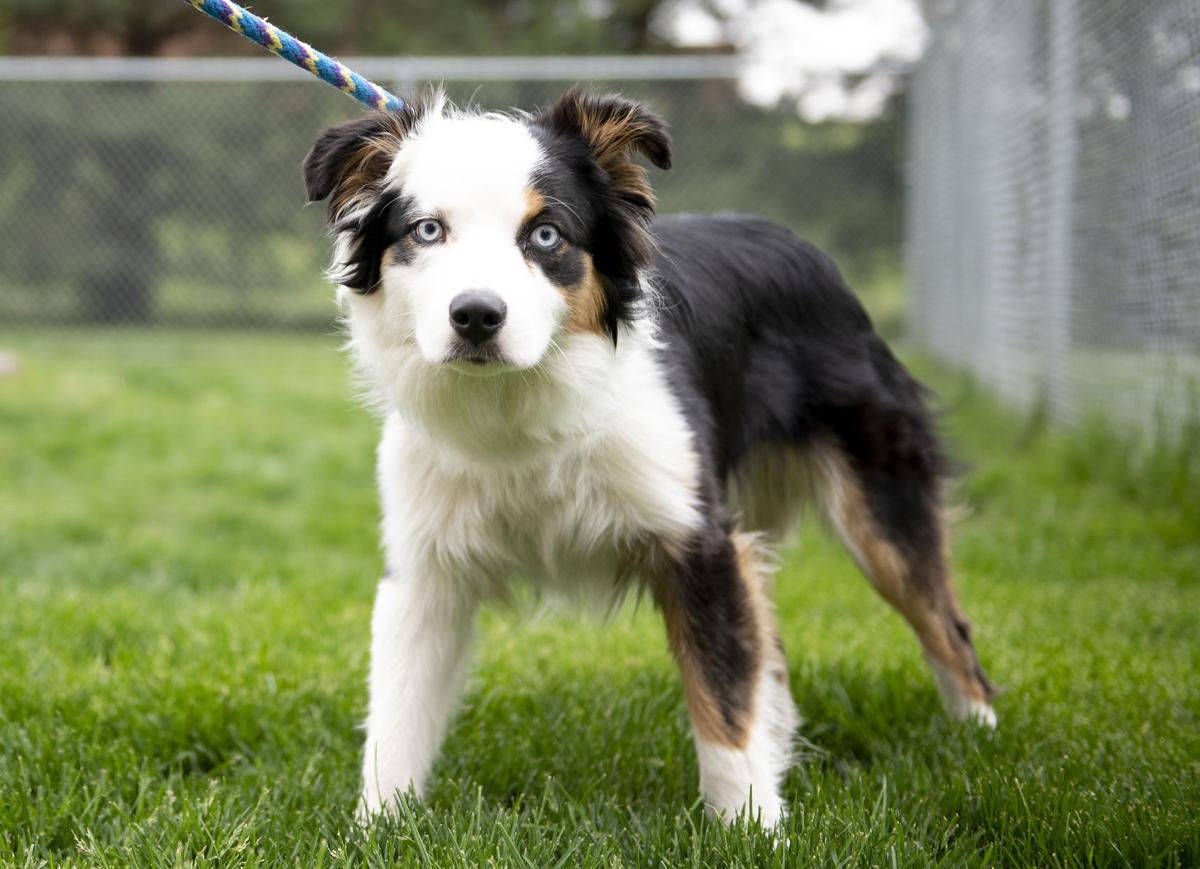 "Rowdy," a 5-month-old Australian Shepherd, explores the backyard at the Siouxland Humane Society on Saturday, May 16, 2020.

Cheryl Derby takes out Domestic Shorthair kittens at the Siouxland Humane Society on Saturday, May 16. As of this weekend there were only nine cats at the shelter, a small fraction of their normal feline population. 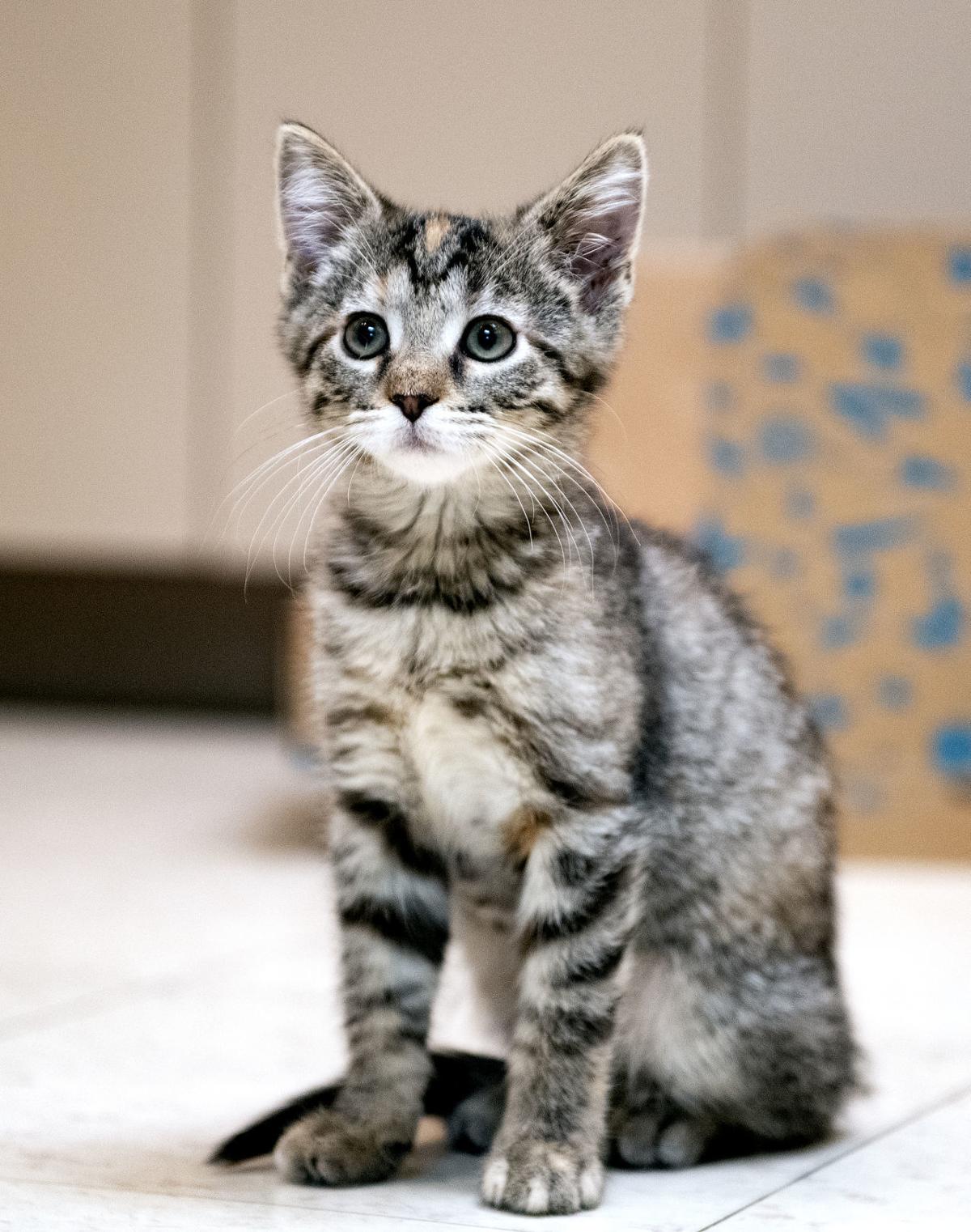 "Pocahontas," a Domestic Shorthair kitten, explores the cat room at the Siouxland Humane Society on Saturday, May 16. Pocahontas was one of only nine cats at the shelter this weekend.

Cheryl Derby talks about the nine cats available for adoption at the Siouxland Humane Society on Saturday, May 16. The shelter has fewer animals than normal at present, and they've restricted human visitors in an effort to stem the risk of COVID-19 infection. 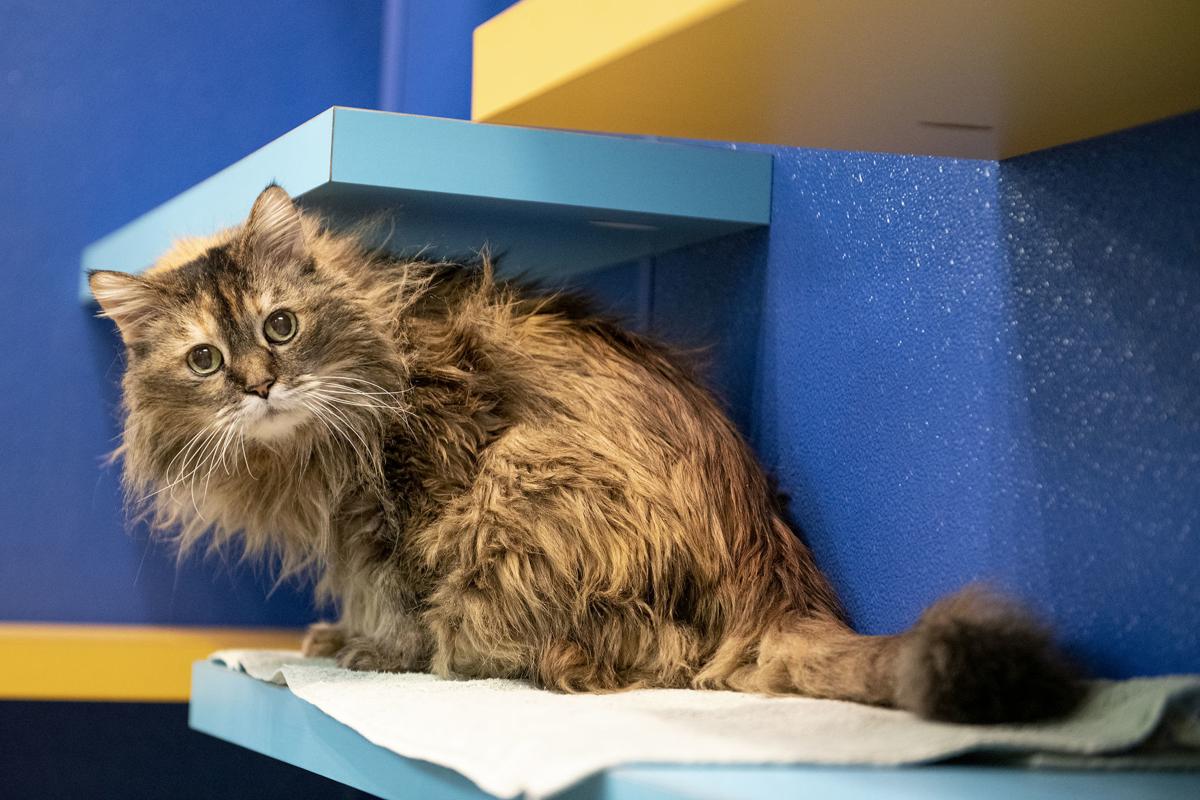 "Super Nova," a 12-year-old Domestic Longhair mix, sits on her shelf at the Siouxland Humane Society on Saturday, May 16. The shelter has restricted visitors due to the COVID-19 pandemic.