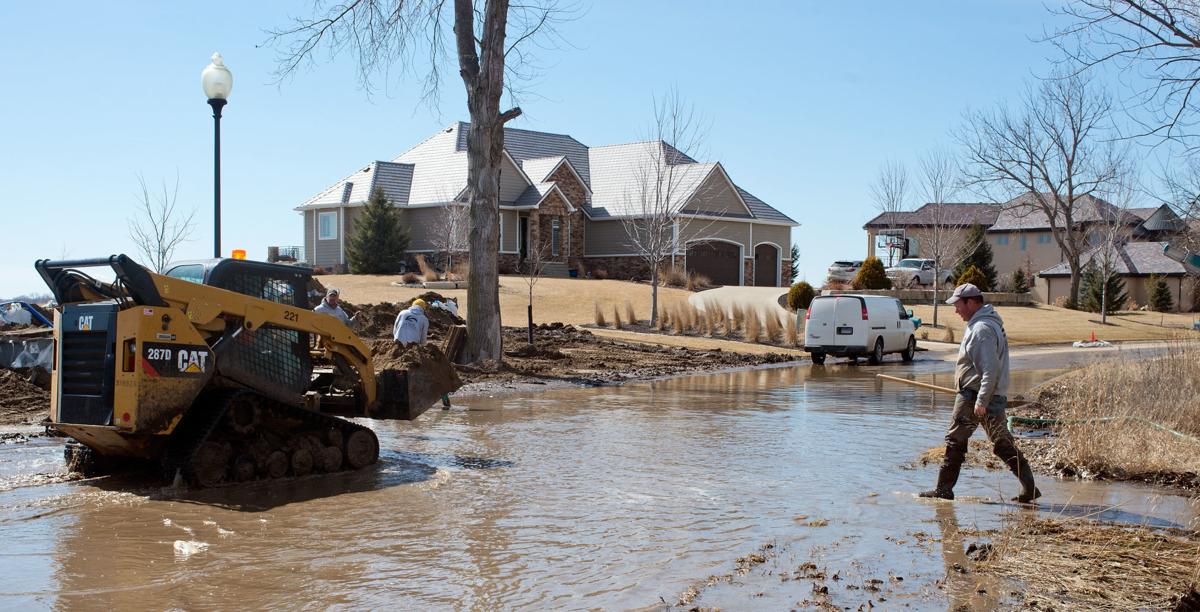 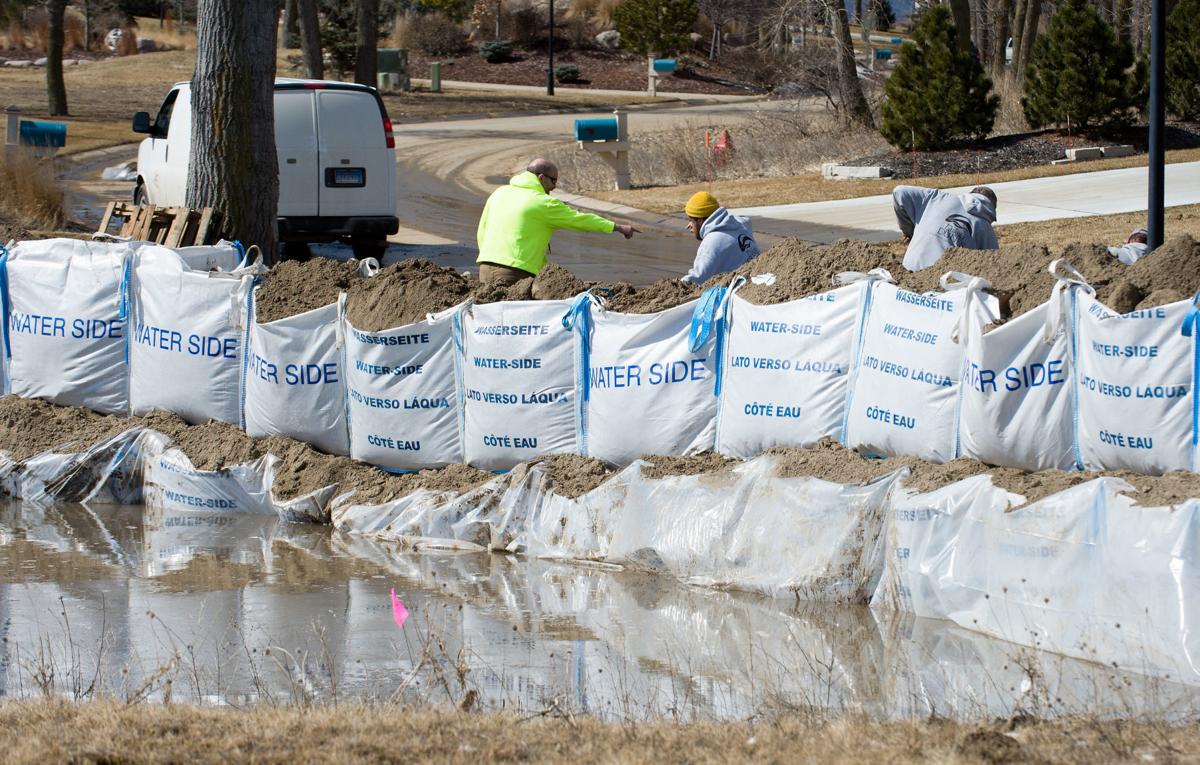 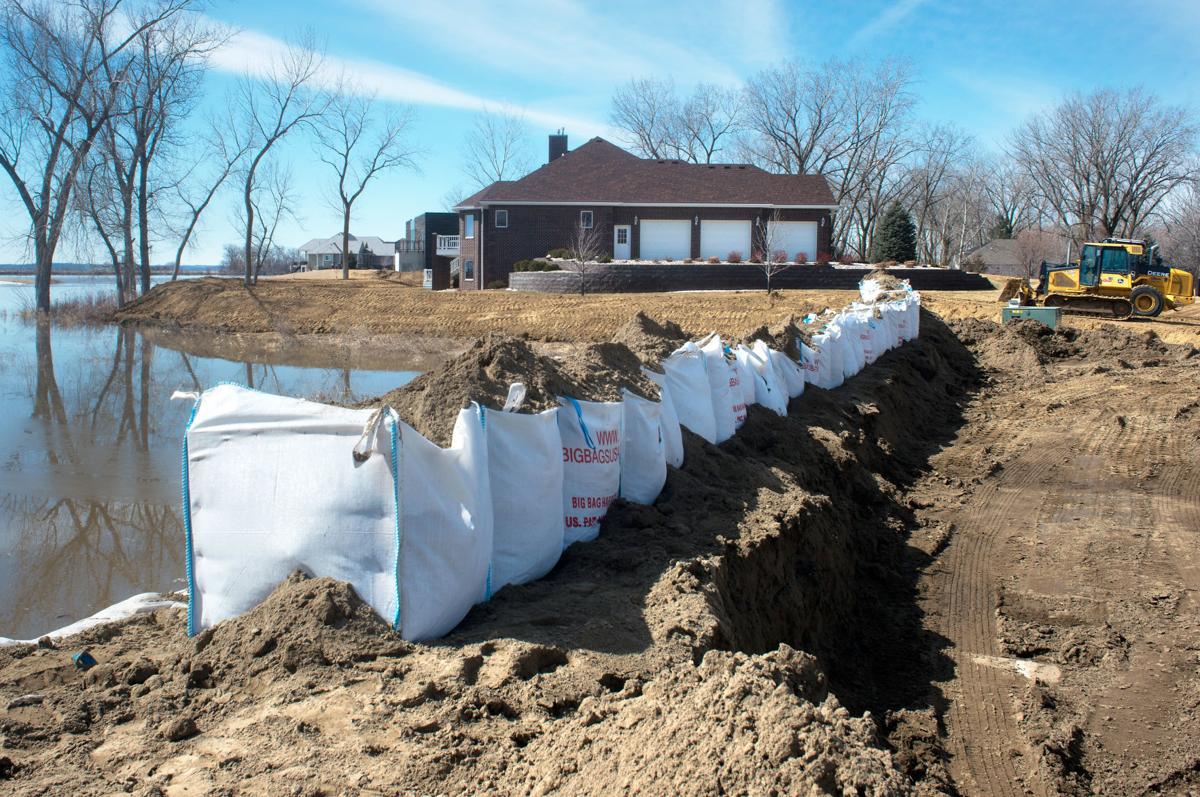 SIOUX CITY -- Communities throughout northwest Iowa on Saturday continued to grapple with flooding -- some areas began cleanup, others await the crest of the Missouri and Big Sioux Rivers and a few remain displaced from their homes.

At a press conference Saturday afternoon, Jeff Hanson, Sioux City's Community Development Operations Manager, said trails along the Missouri River are closed due to the anticipated crest of the Missouri River Sunday, as is the boat ramp and parking lot. Nearby wells are closed for sandbagging.

Hamilton Boulevard was closed down at the I-29 underpass Saturday afternoon due to water, according to a tweet from the city. A detour will be posted to get around the closed underpass.

Hanson said the river-adjacent Hilton Garden Inn has no immediate plans to close. 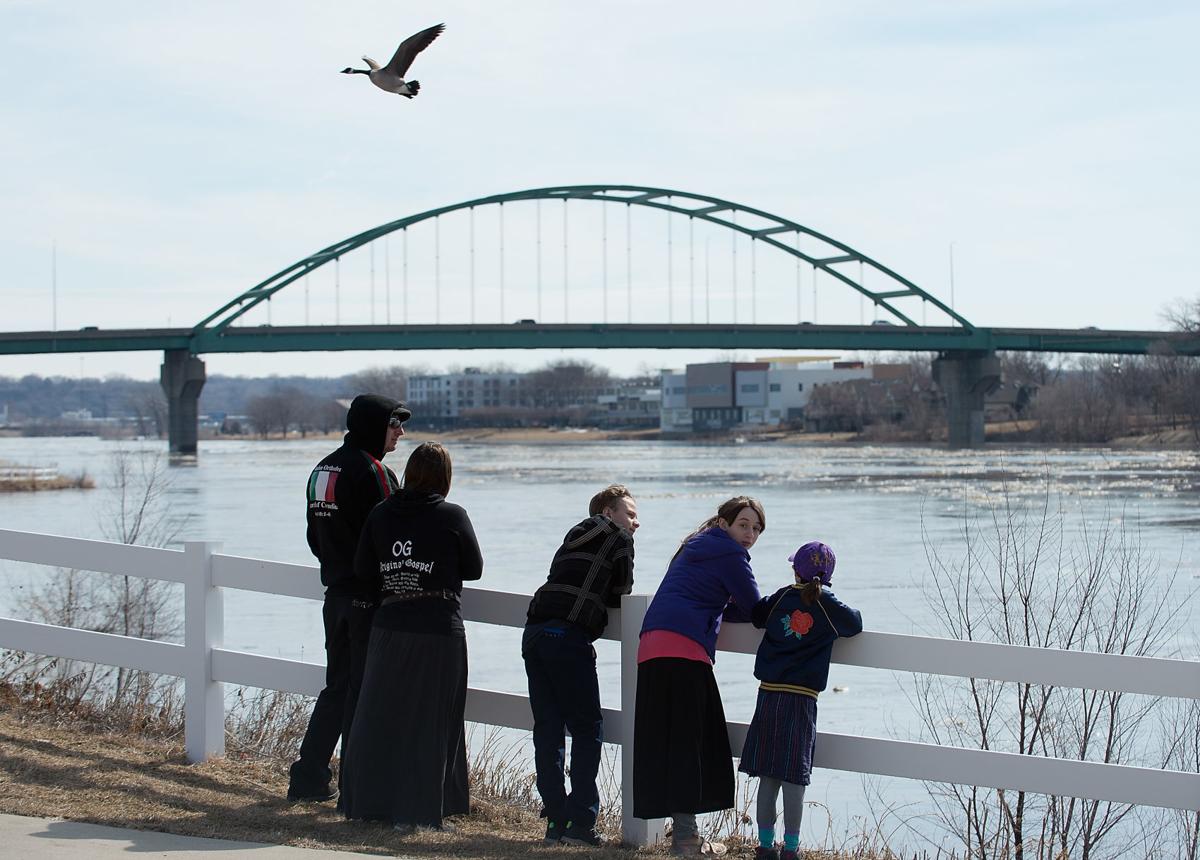 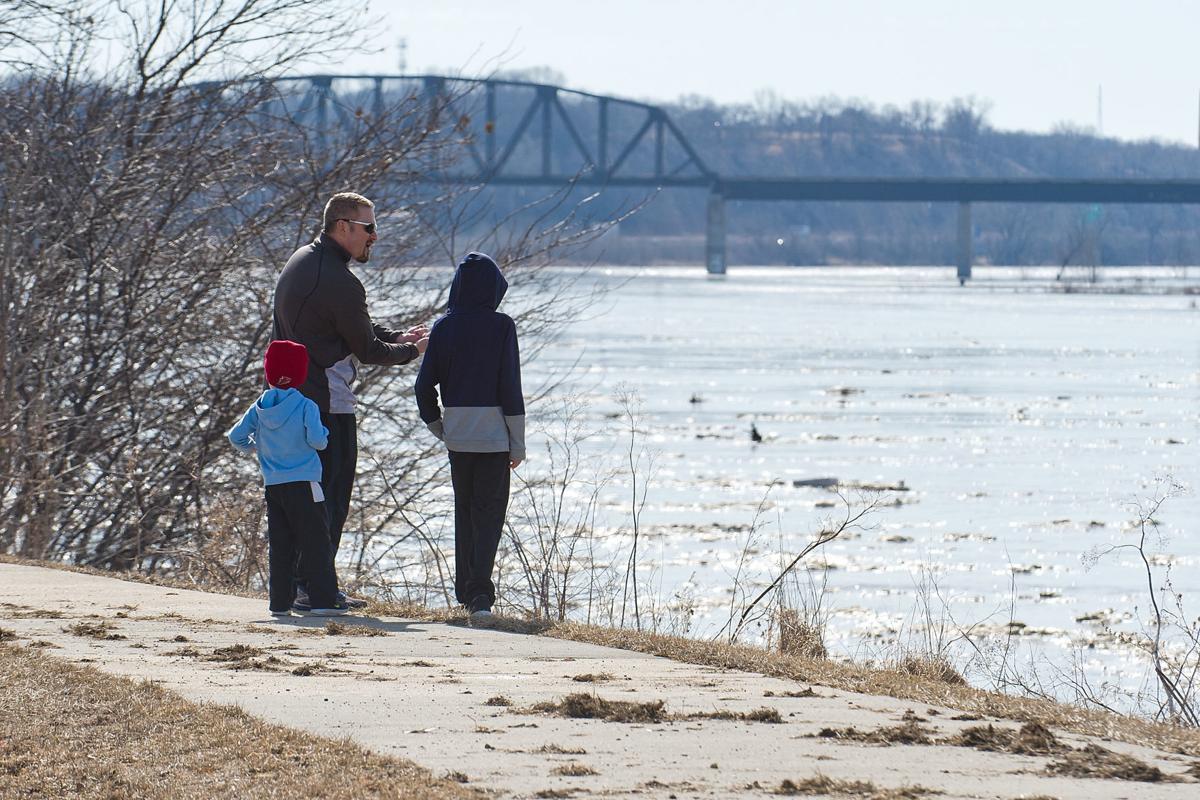 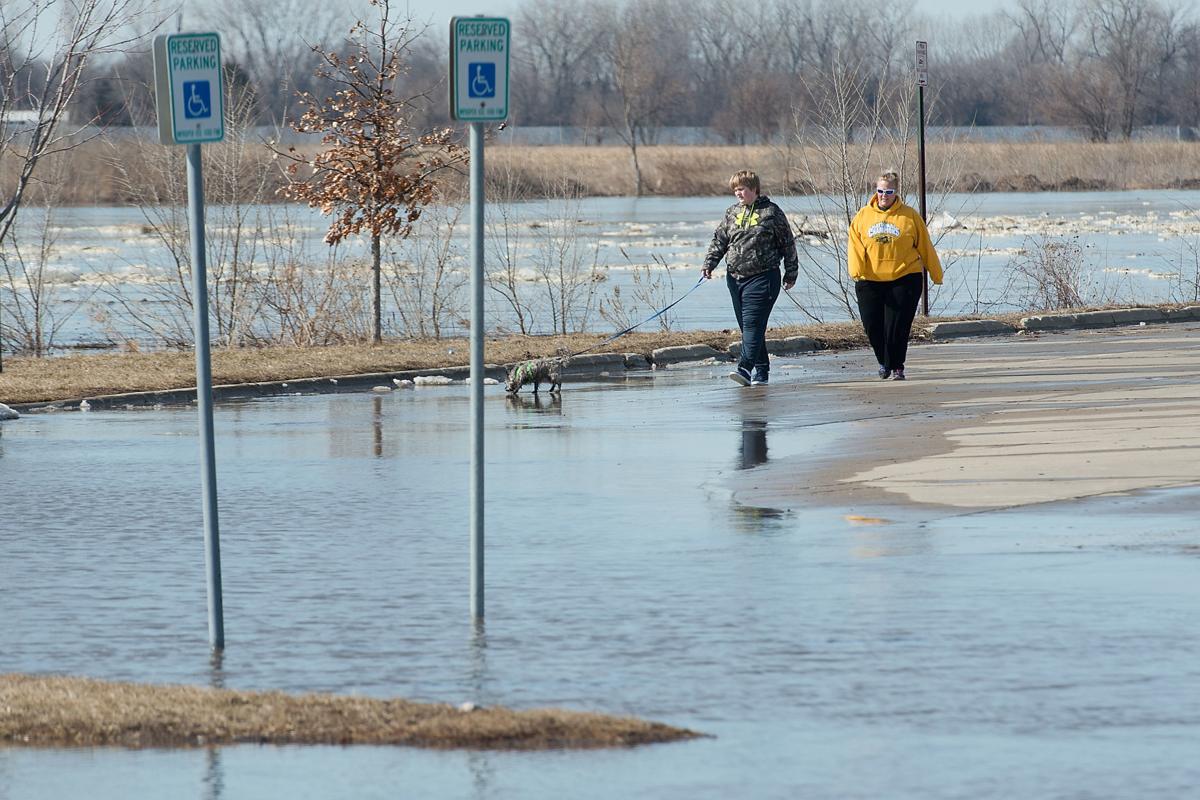 Joey Shockman of Jefferson, 14, and his mother Arlene Shockman walk the dog as the Missouri River takes over part of the parking lot at the boat ramp at Chris Larsen Park in Sioux City, Iowa on Saturday, March 16, 2019. Sioux City Journal Photo by Justin Wan 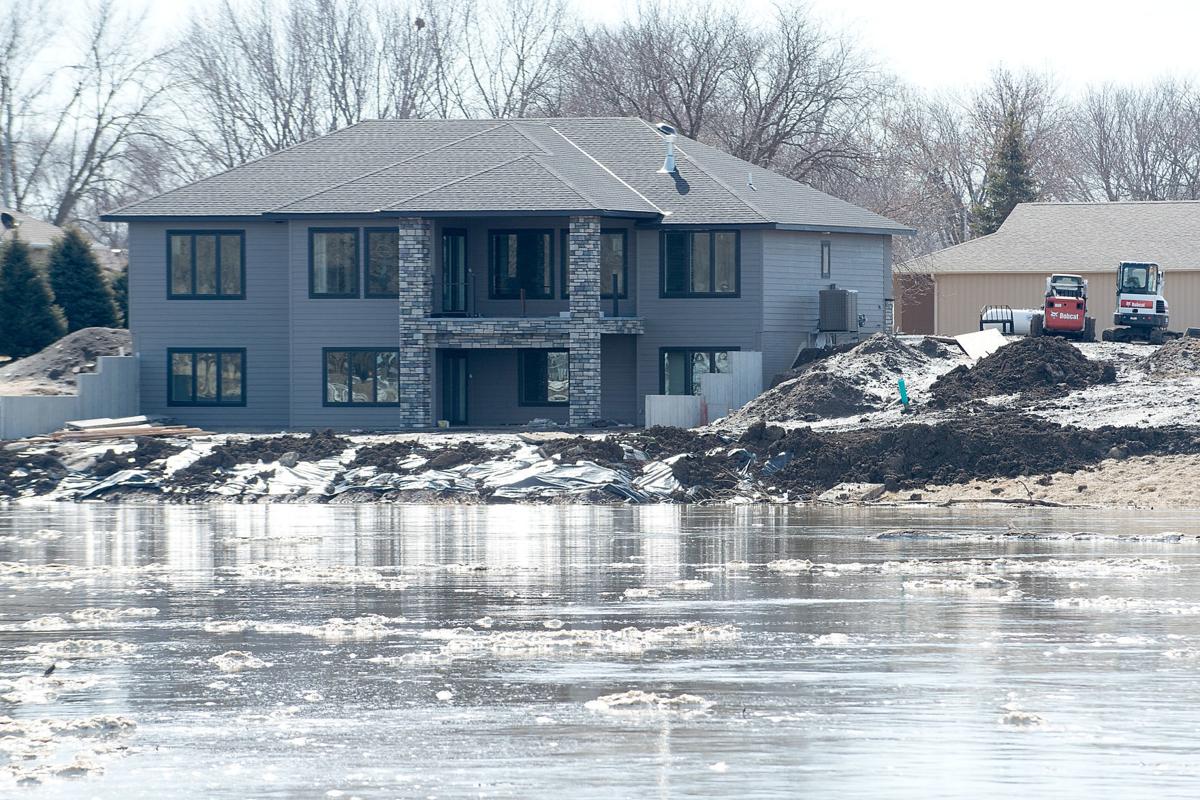 The rising Missouri River is seen a few feet below a home in South Sioux City on Saturday, March 16, 2019. 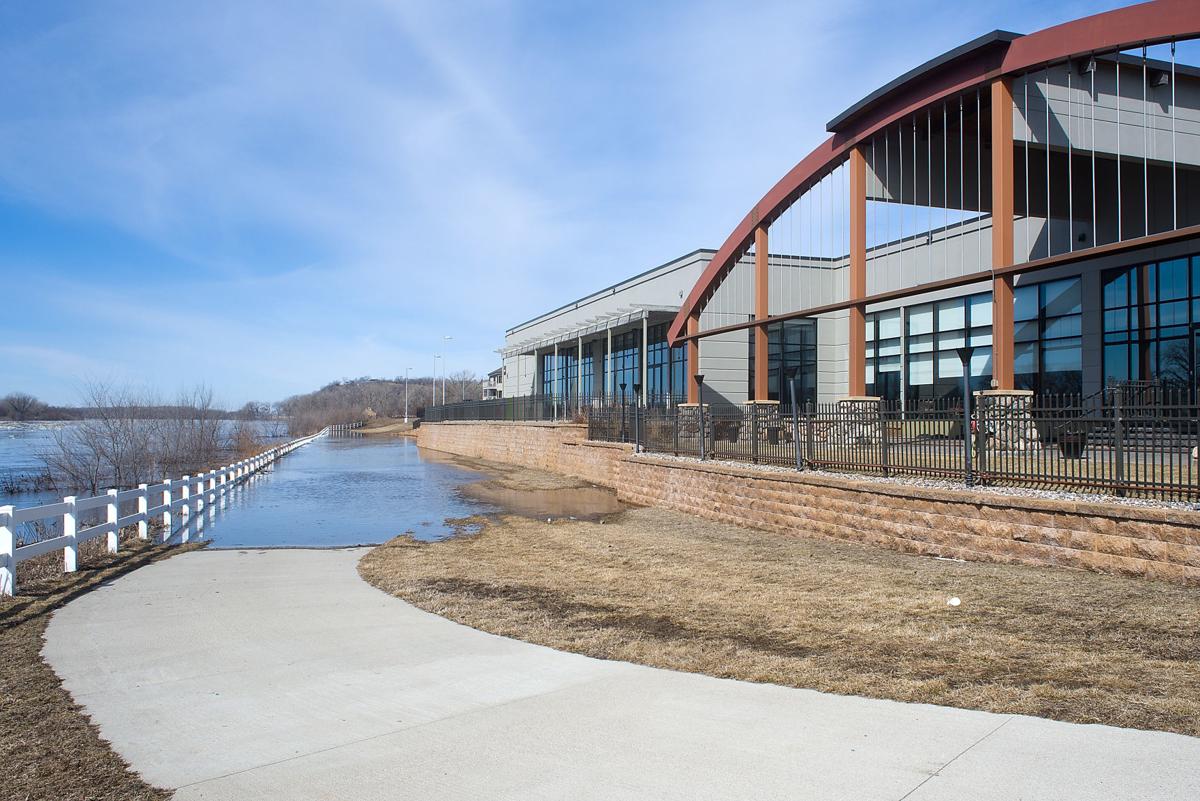 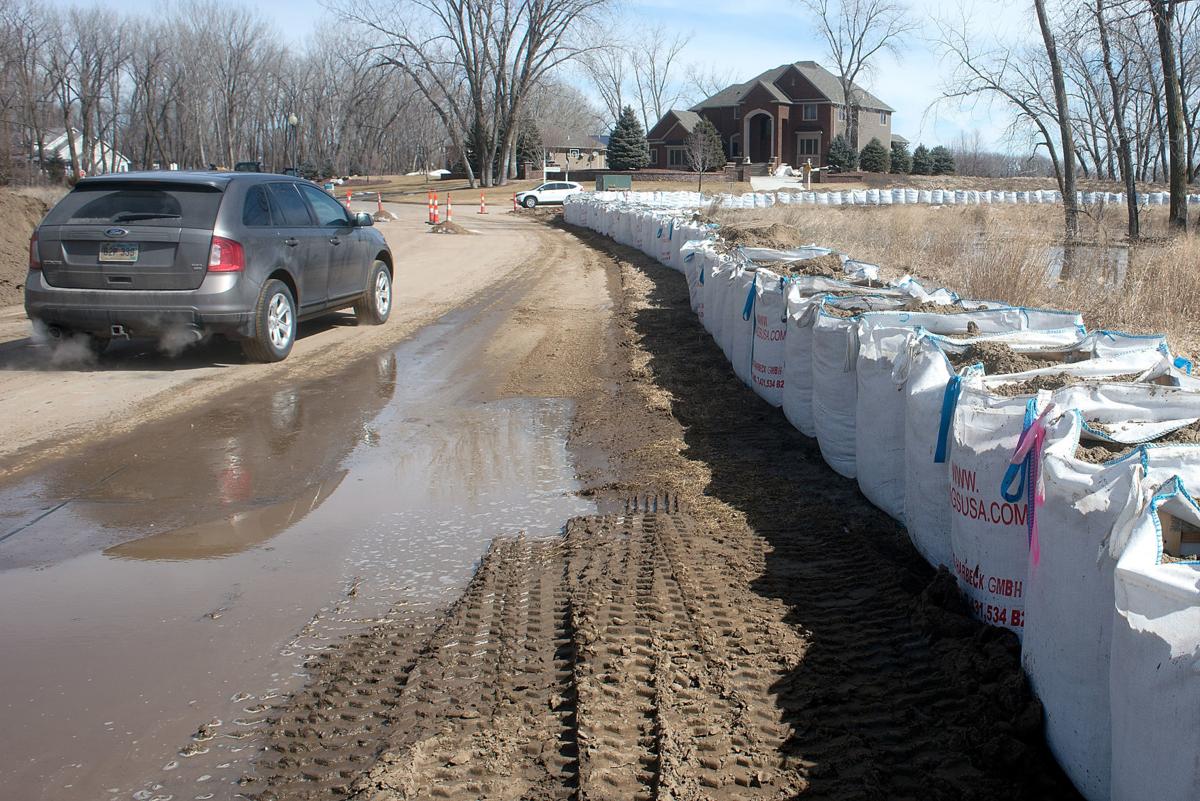 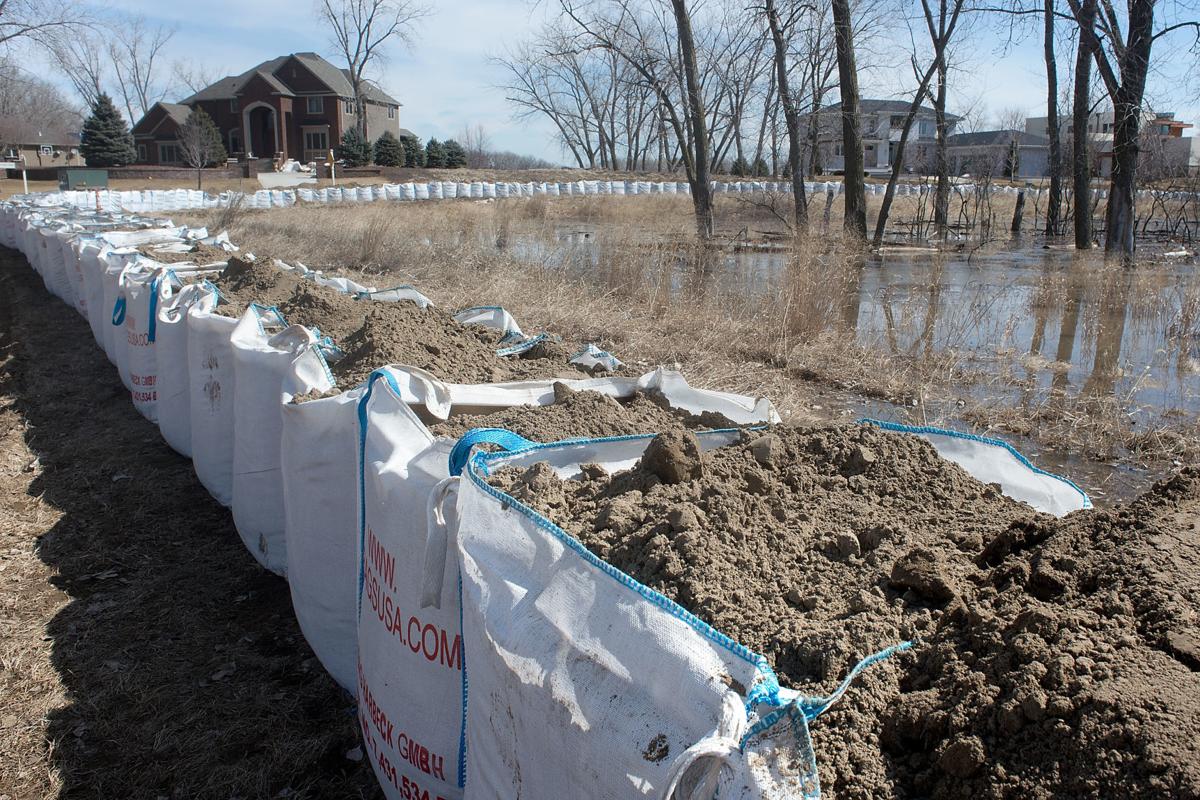 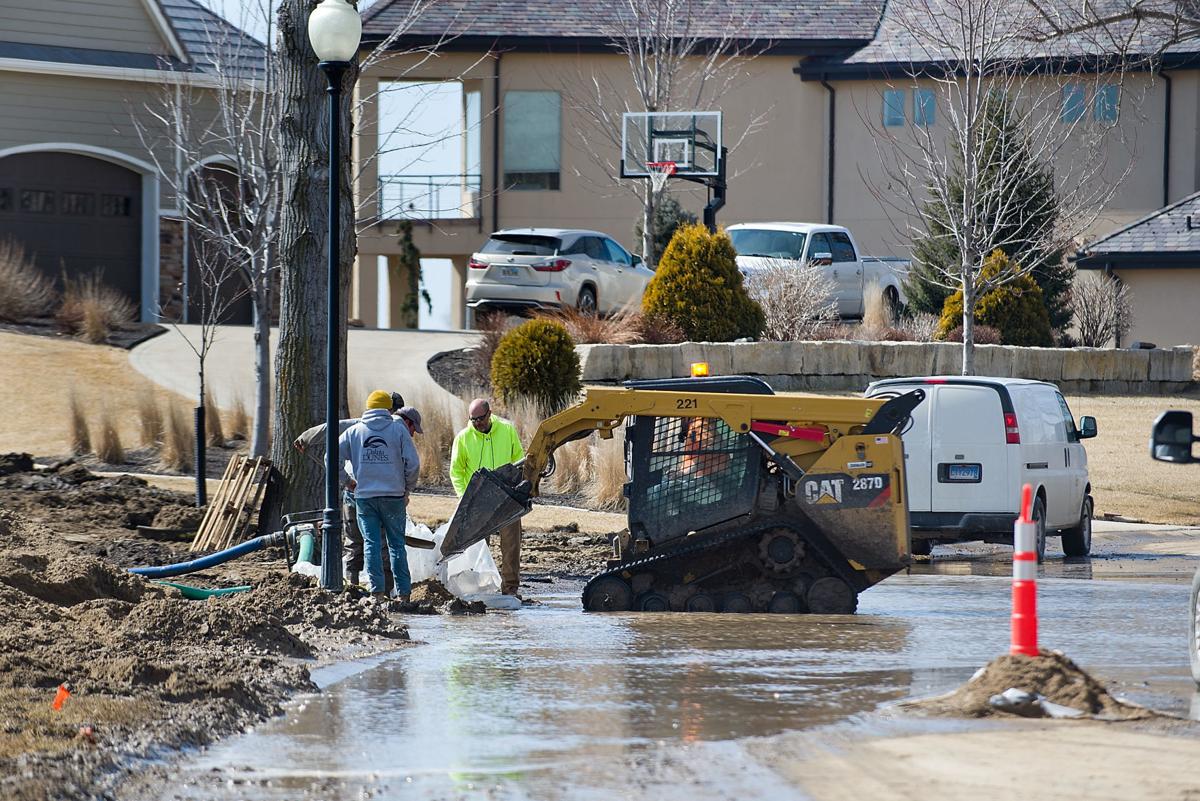 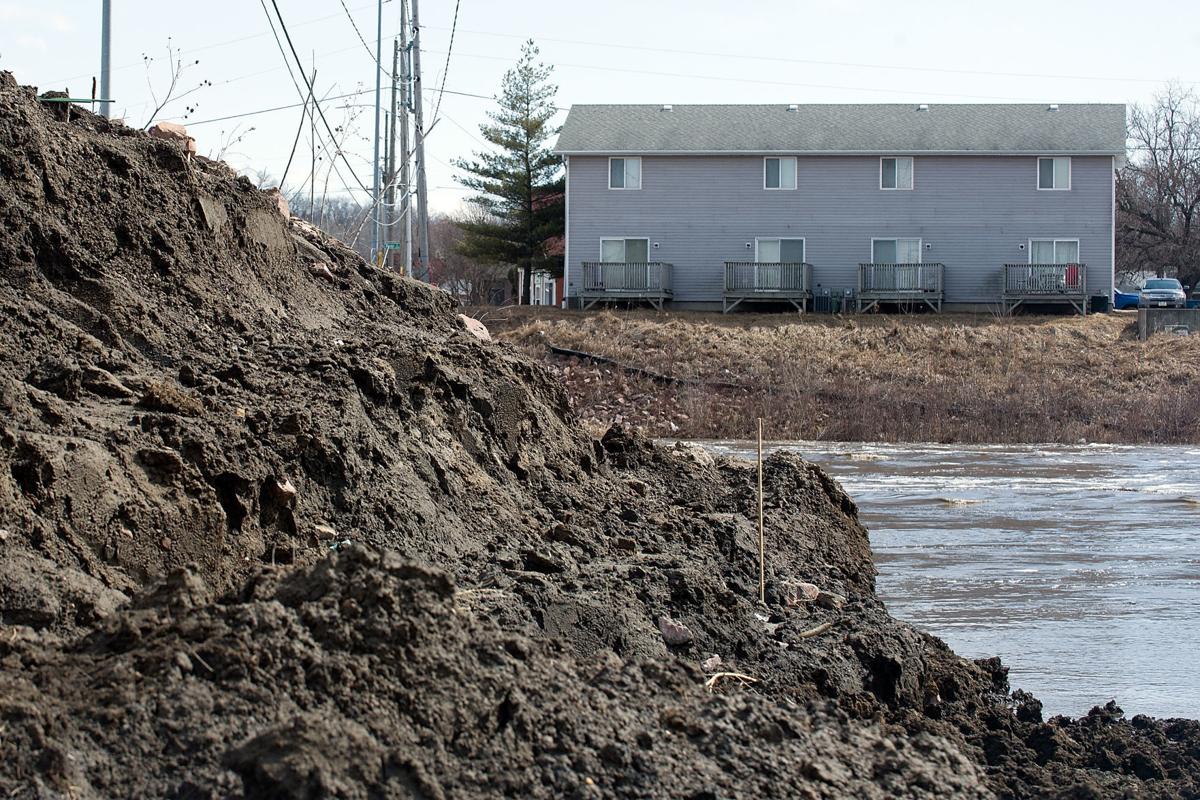 A temporary levy along Big Sioux River is seen at North Sioux City on March 16. 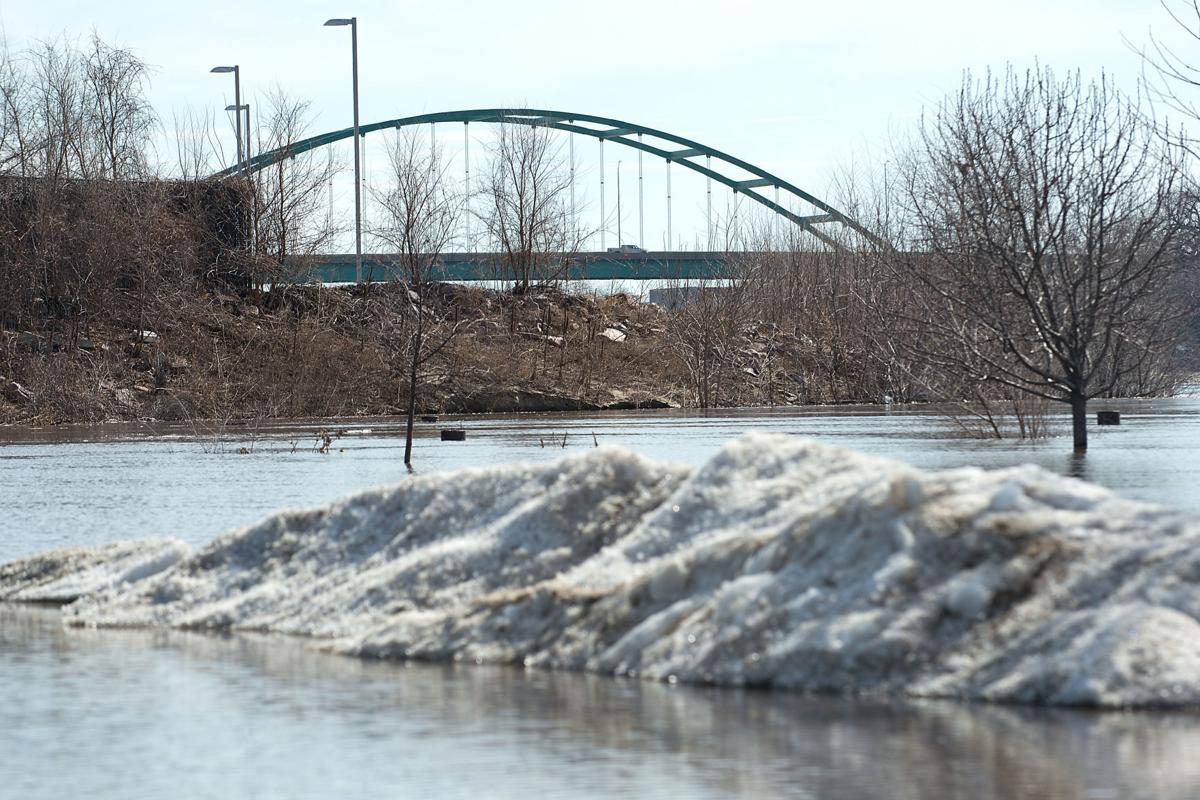 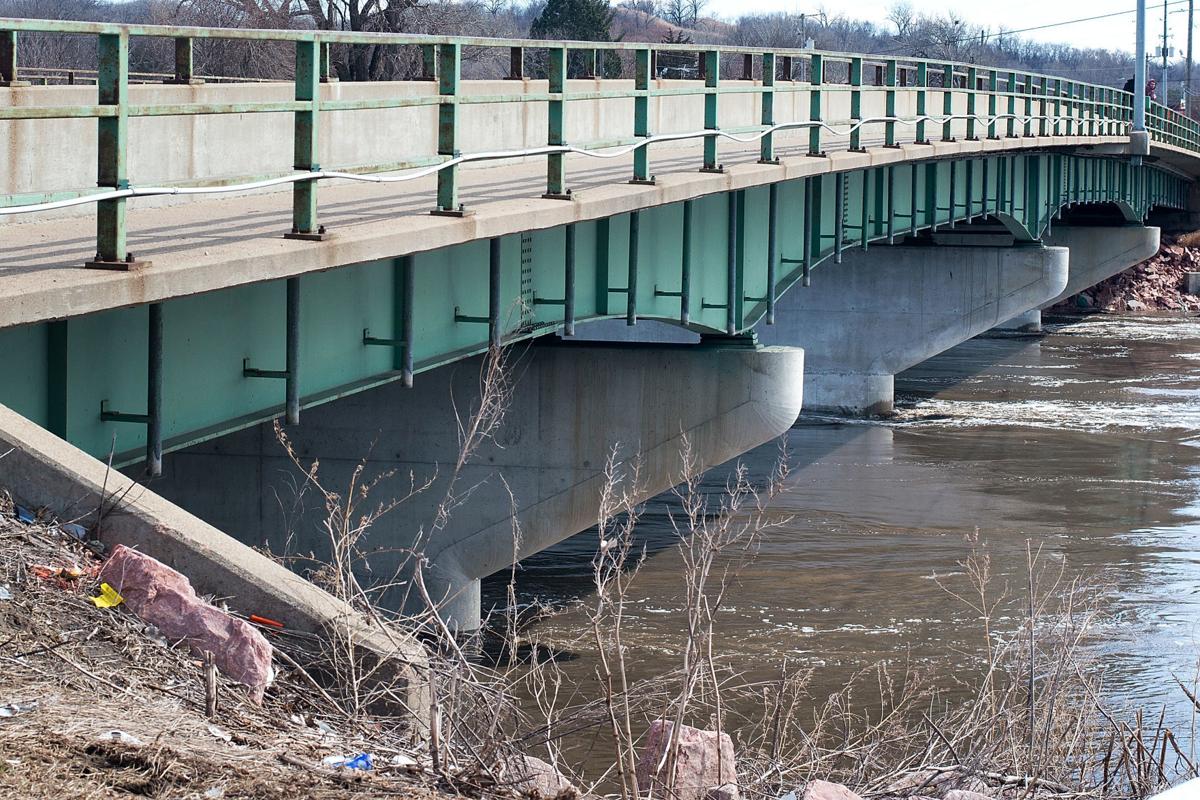 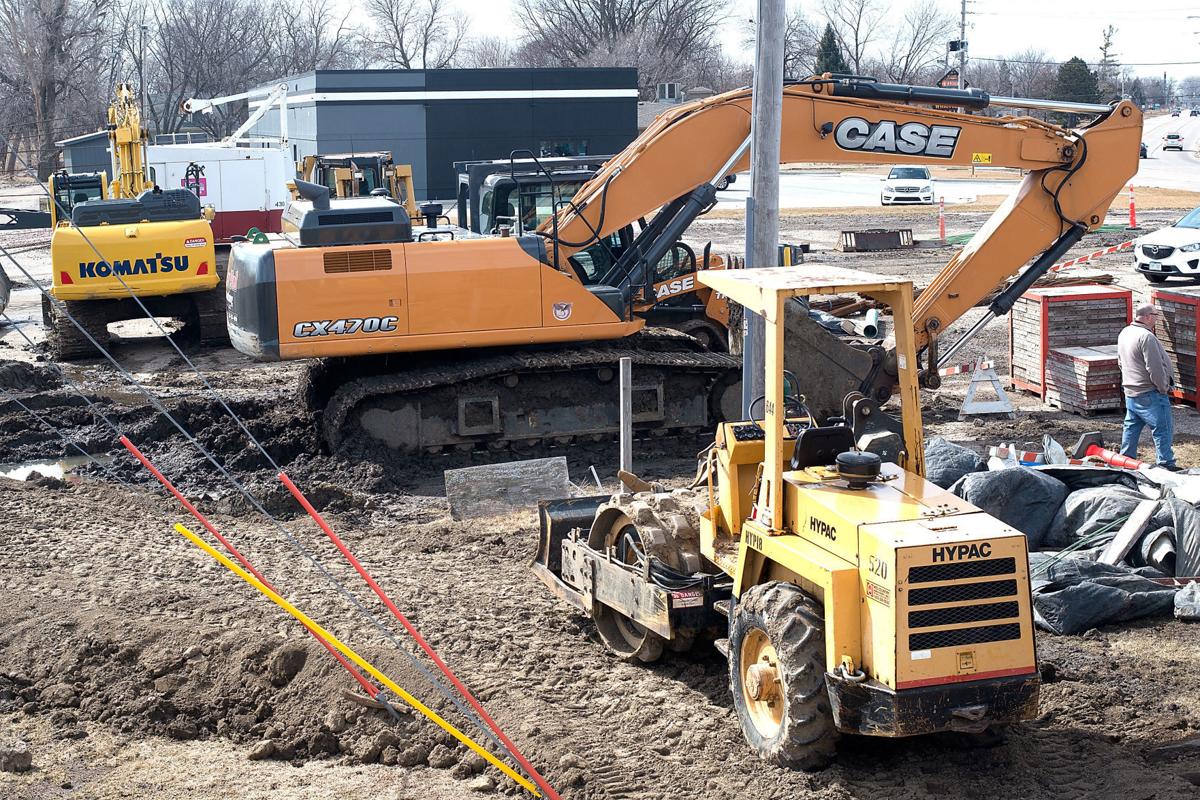 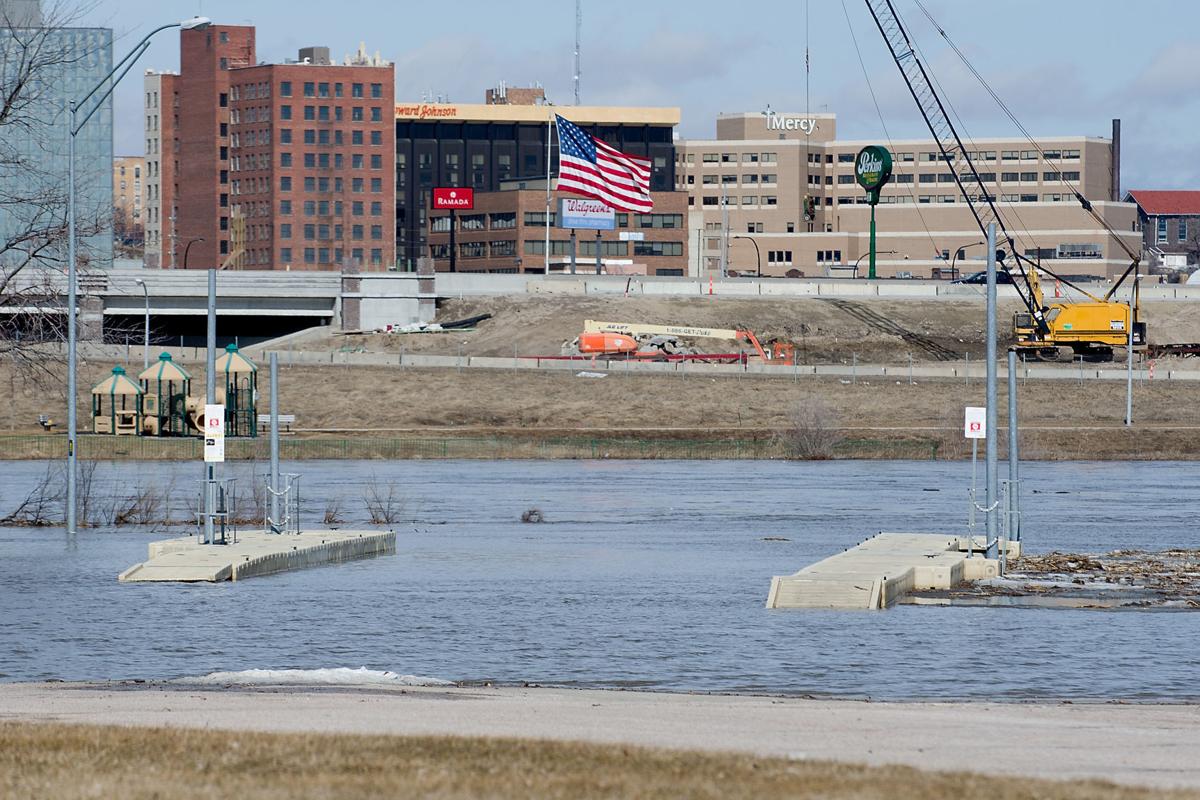 As of Saturday afternoon, the National Weather Service in Sioux Falls reported the Missouri River in Sioux City at a depth of 28.3 feet. Flood stage on the Missouri at Sioux City is 30 feet.  The river is expected to crest at 30.2 feet Sunday afternoon before beginning to fall.

Bridges leading into Iowa from the eastern side of Union County have been closed pending the anticipated river crests.

"At this time, nobody has used that shelter," he said. Dunes residents were warned Friday to prepare to evacuate in advance of rising Missouri River levels.

"There still seem to be a lot of people around," he said. "It's hard to quantify."

In any event, Dunes officials have been preparing for rising river levels.

"We've got some sandbags in lower areas," he said. "Now we're just kind of waiting to see where any problems might happen."

The Lewis & Clark Interpretive Center and adjoining Betty Strong Encounter Center were closed Saturday and Sunday due to flooding concerns. Facilities manager Mike McCormick said water was not an issue in the buildings as of Saturday.

"It's just a precautionary move," McCormick said of the weekend closure.

North Sioux City has taken precautionary measures to protect against the rising waters of the Big Sioux River. Floodgates have been shut and a temporary levee constructed that should protect the city to a river level of 40 feet.

The National Weather Service expects the Big Sioux to crest at 35.6 feet by Sunday afternoon.

Highway 75 near Merrill closed down Friday night due to flooding at the Floyd River, as did County Road C44, though floodwaters have since abated and the roads are open again.

Merrill fire chief Jacob Conley said the flooding began to recede by Saturday. At least one basement collapsed in Merrill due to the flooding.

Rebecca Socknat, Woodbury County Emergency Coordinator, said the small community of Hornick remains closed, though floodwaters have begun receding. She did not know how long the community would remain displaced, and said the county is working with Hornick Mayor Scott Mitchell to assess the situation.

"We will update everybody when the town opens, but we are urging folks, please do not go to the community until that reopens," Socknat said.

The shelter set up for Hornick residents is being closed. Those who still need shelter as the evacuation goes on can contact the Salvation Army for aid.

At least two roads will be "long-term closures" due to damage they sustained in the flooding despite the fact that water has receded, Nahra said.

Story Road, also known as County Road L37, south of Danbury, has a void underneath the pavement "that could collapse under traffic," Nahra said.

"That road will probably be closed at least until the end of next week," he said.

Old Highway 141 between the Wolf Creek Bridge and Route K67 remains closed due to a five-foot void under the pavement.

"When you stand up at the hill to the east and look down at it, it looks like water has receded and everything's OK, but there is a void underneath that pavement that could collapse if traffic was on top of it," he said. "We need to rebuild that road before we can open it for traffic."

Nahra urged drivers to respect road barricades, as the road may be compromised even if flooding is no longer apparent.

Fortunately, most bridges in the county appear to have survived the flooding with minimal damage, Nahra said.

Meanwhile, the towns of Smithland and Correctionville have been experiencing a degree of flooding of their own. Some homes reportedly have been flooded.

Water is getting close to overtopping some roads near Smithland, while County Road L36 south of Correctionville remained closed Saturday along with Highway 31.

Woodbury County opened a call center Saturday to assist residents in reporting flood damage to their properties. The call center will be open from 2 to 4 p.m. Sunday and can be reached at 712-224-5262.

Those wishing to report damages are encouraged to take photos and report it to the State of Iowa Public Damage Public Damage and Storm Reporting website. A link to the website can be found on the Facebook and Twitter pages of Woodbury County Emergency Management.

"If you are needing individual assistance, maybe replacing some items in homes like furnaces or anything, the Community Action Agency of Siouxland is the point of contact for that," Socknat said. "The Siouxland Recovery Fund was activated yesterday afternoon, and that is for anyone that would like to make any monetary donations to any resident or any nonprofit organizations that are helping with these efforts."

The Siouxland Recovery Fund can be found online at siouxlandrecoveryfund.com.

SLOAN, Iowa -- It seemed like all of Hornick's 225 residents were packed into a room to hear details Friday about the flooding in their tight-…

CHEROKEE, Iowa -- The Little Sioux River comes out of its banks in many years, so it's a notable benchmark of the severity of Siouxland floodi…

HAWARDEN, Iowa -- City officials in Hawarden have cancelled a planned sandbag filling for Thursday afternoon as the forecast crest of the Big …

HAWARDEN, Iowa -- Additional flooding fears along the Big Sioux River eased Wednesday as predictions for the river's rise in Siouxland next we…

OMAHA -- Water releases from Gavins Point Dam were decreased Wednesday and will be reduced further by Thursday morning, the U.S. Army Corps of…

SIOUX CITY -- More than 2,400 Iowans have registered their flood-damaged property with the Federal Emergency Management Agency since severe fl…