SERGEANT BLUFF -- As he formally jumped into the race for the U.S. Senate seat Monday, Jim Carlin cited his career as a solider, trial lawyer and state senator in which he repeatedly fought "for the underdogs of this world."

Carlin himself would be a decided underdog if the fellow Republican he seeks to replace, Sen. Chuck Grassley, decides to run for an eighth term.

The 58-year-old Sioux Cityan did not mention Grassley during his campaign kickoff Monday morning at the American Legion post in Sergeant Bluff.

Grassley, 87, has said he will announce his intentions in several weeks. His grandson, Iowa House Speaker Pat Grassley, told WHO-TV Sunday that he expects his grandfather to run for another six-year term.

During his speech, Carlin stood clearly with former President Trump, who was acquitted Saturday by the U.S. Senate for his alleged role in a group of Trump supporters storming the U.S. Capitol on Jan. 6.

The breach came as Congress began counting the electoral votes in the election won by Joe Biden. For weeks before, Trump claimed that the election was stolen from him, despite his campaign losing numerous lawsuits challenging the results.

Carlin gave credence to such claims of election irregularities Monday, saying, "never again should the political class abdicate its responsibility to investigate and hold hearings when millions of Americans have doubts about the legitimate winner of an election."

"We are equal in the words of the Constitution and we are supposed to be equal in the eyes of the law," Carlin told a group of about 20 supporters. "This past election proved we are not. Not when there are different standards about who gets to vote, how they can vote, when they are allowed to vote, and who supervises the count when votes are tabulated in the dark of the night.

"The American democracy will crumble if voters lose faith in the integrity of elections and those who count the ballots."

Carlin cited numerous successes of Trump's presidency, which included standing up to China for unfair trade practices, appointing nominees to the Supreme Court who "preserved freedom and self-determination," negotiating "meaningful peace deals" in the Middle East, and policies that caused the economy to boom and salaries for the working middle class to increase by $6,000. 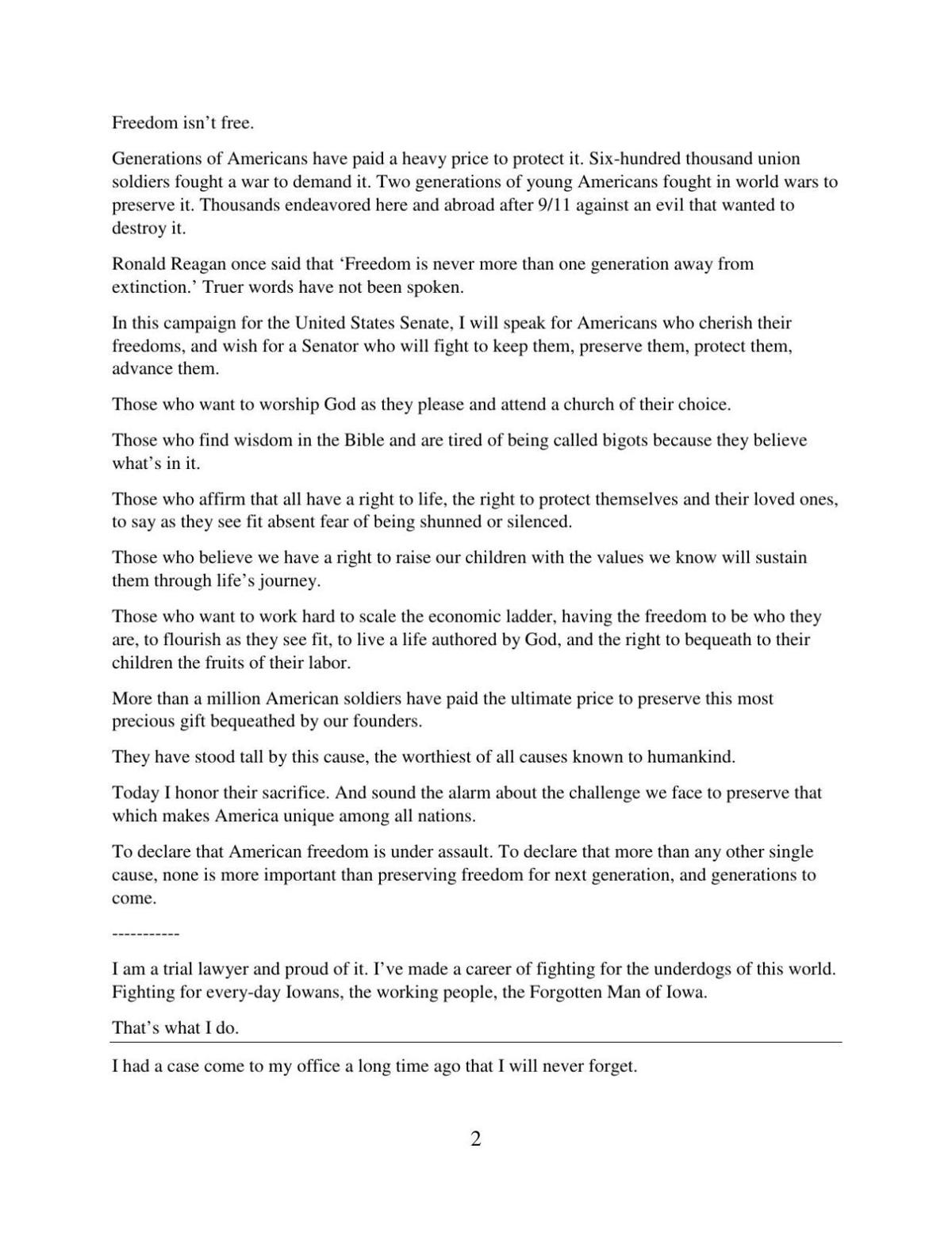 "Sometimes you can know who a person is by their enemies. No one knows this better than President Trump. The same people who threaten our freedoms and seek to control what we see, read and hear from one another hated him," Carlin said. "Still, he stood up for us for four years."

As a U.S. senator, Carlin said he would work to preserve rural America, restore faith in democracy, stand up to China, and win the fight for free speech against giant tech companies whom he said have consolidated too much power.

He had harsh words for the U.S tax code, which he called an "abomination," and a welfare state that penalizes married couples with children.

Carlin, a U.S. Army veteran, has practiced law in Sioux City since 1992. He earned his B.S. degree in economics from the University of Massachusetts, and his law degree from Marquette University.

"I’ve made a career of fighting for the underdogs of this world. Fighting for everyday Iowans, the working people, the Forgotten Man of Iowa," he told supporters Monday. "That’s what I do."

Carlin, 58, served in the Iowa House, and then was elected to the Iowa Senate in a 2017 special election to fill a vacancy created after state Sen. Bill Anderson resigned to take an economic development position in Cherokee.

Carlin won a full four-year term in the Senate in 2018. A pro-life supporter, he cited his efforts with other state lawmakers to pass a Heartbeat Protection bill.

Carlin and his wife, Donna, are the parents of three children.

Detroit fights to slow pace of coronavirus in city

Check out this incredible Russian art exhibition under frozen water

Check out this incredible Russian art exhibition under frozen water

The bill would mandate officials enlist a vendor to verify assets, identity and other eligibility criteria for those using assistance programs.

Under current law, unless defendants were younger than 18 at the time of committing a Class A felony, they are sentenced to life without the possibility of parole unless the sentence is commuted by the governor.

State Sen. Jim Carlin asked why chronic disease appears to be more prevalent and why autism is more frequently diagnosed than in past eras. 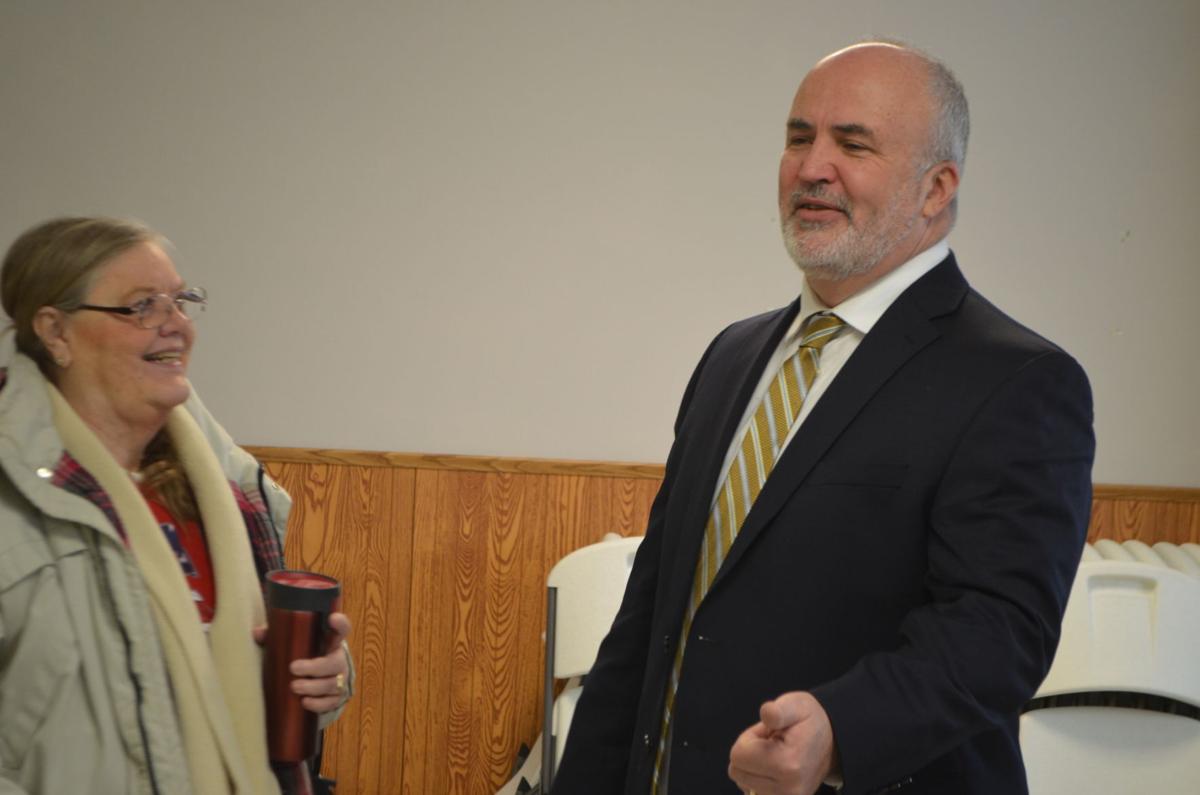 Iowa state Sen. Jim Carlin formally announced his bid for the U.S. Senate in front of more than 20 supporters at the Sergeant Bluff American Legion post on Monday morning. The seat, currently held by Chuck Grassley, will be up in 2022. 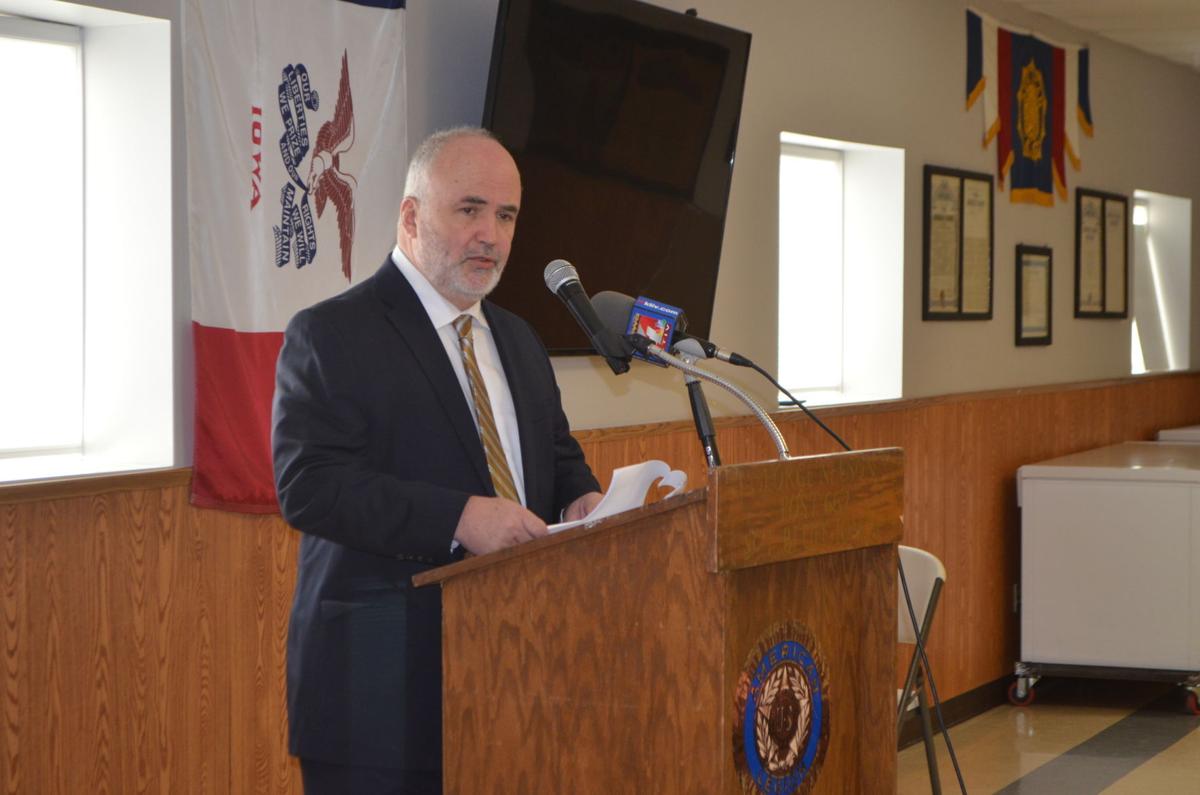