SIOUX CITY -- A virtual deluge of presidential candidates will come to Siouxland over the next year, as they strive to convince voters to support them in the Feb. 3, 2020 Iowa caucuses.

In those events, from town hall meetings to tours of agencies, businesses and of course coffee shops, Democrats will be airing ways to differentiate themselves from each other and Republican President Donald Trump.

Siouxlanders are used to having the chance to see candidates in close fashion over many events, and as national issues change over the months. They can directly ask questions and size up the answers.

That's access that people in other states often don't get, making caucus campaigning a notable reality for Iowans. (You decide, whether perk or scourge.)

Here are some key things to know about the 51 weeks ahead, in the form of the Five W's crucial to newswriting.

WHAT -- When caucus night arrives, a swarm of political reporters drape the state as the action plays out in more than 2,000 precincts in all 99 counties.

Unlike primary elections that occur in nearly all other states, in caucuses each political party sets up multiple venues in every county, sometimes at a private residence or a school. Democrats and Republicans handle the actual vote differently, but the key is that residents debate the issues and discuss candidates before voting. That vote is then tallied statewide.

WHY -- "Why" often comes last in the recitation of the W's, but we'll bump it higher, because it is important to know how Iowa got primacy in picking presidential nominees.

After bursting onto the national political map in 1976, the Iowa caucuses have remained a key early-state contest in the process of picking a U.S. president every four years.

The caucuses have maintained their first-in-the-nation status in the line of state votes that winnow the field of candidates. Many a candidate has dropped out within a day of faring poorly in Iowa, while others have emerged with the wind at their backs while moving onto New Hampshire and other contests.

Caucuses have been held in Iowa since 1846. It was the 1976 surprise second-place Iowa finish by little-known Jimmy Carter that gave the caucuses their clout. Carter, a Democratic governor from Georgia, won the presidency that year.

That candidate-making heft has caused some states to jealously seek to push down Iowa later into the process. But Iowa has weathered those battles, remaining one of the few states where candidates come again and again to connect with grassroots activists in the Republican and Democratic parties.

WHO: It is important to note it will be an overwhelmingly Democratic group campaigning in Iowa. It is conceivable a Republican or two will seek to upset Trump, but the prime action will be among Democrats, with the possibility of up to 20 candidates.

Likely or actual candidates such as Eric Swalwell, who is already set for a Feb. 16 city appearance, Kamala Harris, Cory Booker, Sherrod Brown, Julian Castro, Bernie Sanders, Steve Bullock, Pete Buttigieg and others may not be far behind.

For the record, Delaney, Castro and Swalwell even made Northwest Iowa stops in 2018.

WHERE: Iowans get some of the first looks at candidates in events that range from small to large. There are the coffee shop stops that are widely lauded as a great opportunity for access (and of course great campaign photos).

Some are set as shorter meet-and-greets, where the candidate in a library or restaurant will shake hands and make brief remarks. Then come the events in bigger venues, with town hall meetings or rallies. Town halls are often held in community buildings, schools or colleges, where a microphone is passed around to air questions.

Lastly, the rallies drawing hundreds or thousands of people are held in such frequent Sioux City spots as Morningside College or the Orpheum Theatre, which were selections by Trump and Hillary Clinton right before the 2016 caucuses. That was also the spot where Warren kicked off the 2019 city events, by drawing nearly 600 people. And many more lie ahead for the next 360 days.

OCHEYEDAN, Iowa -- David Johnson laments that his message about President Donald Trump and the direction of the Republican Party is falling on…

Warren: Democrats win if they run on economic opportunity

CEDAR RAPIDS, Iowa — Eleven years ago, before she was a senator, Elizabeth Warren was supposed to join presidential candidate Barack Obama in …

Warren: I’m not afraid of anyone, including Trump

DAVENPORT, Iowa -- Elizabeth Warren says she is ready for what might come her way in a potential 2020 general election fight with President Do…

SIOUX CITY -- Jenna Bush Hager will be the keynote speaker at the 2019 Women Lead Change Siouxland Conference on Wednesday.

DES MOINES -- An online option may be available for Iowa Democrats to participate in the state’s first-in-the-nation caucuses, the most signif…

SIOUX CITY -- There is firm agreement by Republican and Democratic party leaders on one issue, as they jointly asked Woodbury County school di…

Pete Buttigieg thinks there is a hunger in the Democratic Party for a fresh face, and the 37-year-old mayor of South Bend, Indiana, says his f…

SIOUX CITY -- Police said a man was bitten by a Sioux City Police Department K-9 dog during an arrest Friday.

SIOUX CITY -- In a visit to a Sioux City home Saturday night, U.S. Rep. Eric Swalwell, D-Calif., teased an audience of a few dozen about a pot…

DES MOINES --- A new, online option for Iowa Democrats who want to help pick the next president presents some new opportunities — and challeng…

BURLINGTON --- As he drove along the Mississippi River between campaign stops, Beto O’Rourke pined to pull the vehicle over --- yes, he was dr…

SIOUX CITY -- In his first Sioux City campaign stop as a Democratic presidential candidate, Beto O'Rourke on Thursday began with an impassione…

SIOUX CITY -- It was deadline day for Americans to file their federal income tax returns, and Democratic presidential candidate Cory Booker us…

SIOUX CITY -- Democratic presidential candidate Andrew Yang will speak at a Sioux City college Friday, when he begins a multi-day swing through Iowa.

SIOUX CITY – Gov. Steve Bullock wears boots. They're dusty, scuffed and brown, but the governor of Montana wears them. And on Monday night, as…

Craft breweries seem to have displaced Pizza Ranch restaurants as a venue of choice for presidential hopefuls, and a forum offering the best o…

SIOUX CITY -- Pete Buttigieg, the mayor of South Bend, Indiana, and a Democratic presidential candidate, will make a stop in Sioux City Wednesday.

SIOUX CITY -- Democratic presidential candidate Tim Ryan will return to Sioux City on Tuesday, as he has slated a campaign appearance to discu…

SIOUX CITY -- Citing her past experience as a prosecutor, Democratic presidential candidate Kamala Harris laid out a "rap sheet" of evidence t…

SIOUX CITY -- O.J. Semans says it would be a mistake for presidential candidates to ignore Native American voters in the 2020 election.

SIOUX CITY -- What issues are most important to Iowa's Latino voters in the 2020 election?

“I think it’s like parades. I don’t know if being there helps you, but if you don’t it could hurt you,” an Iowa party chair said. The soapbox is part of the essence of the Iowa caucuses “just like showing up at chicken dinners and steak fries.”

“I know that I have made mistakes. I am sorry for harm I have caused,” said Warren, who received a standing ovation when she took the stage at the Orpheum Theatre. “I have listened and I have learned."

Retired three-star admiral Joe Sestak has sailed into the high waters of the 2020 Iowa caucus campaign and found the natives friendly.

Alex Watters is a disabilities advocate, and he introduced Harris at her first Sioux City event. In a release, he said the two have discussed accessibility in schools and workplace.

CEDAR RAPIDS — The proverbial Labor Day gun has gone off to start the 2020 presidential campaign, and Joe Biden says he is comfortable with wh…

SIOUX CITY -- Democratic presidential candidate John Delaney will speak at two events next week when he returns to Northwest Iowa.

In the seat of conservative Sioux County, a crowd estimated at more than 285 people gathered at the Prairie Winds Events Center. Sanders received a standing ovation and chants of "Bernie!" as he approached the podium.

“That’s the truth. Not a lot of people are willing to say it,” Castro said. Responded the state Democratic party chair: "If he feels like this is the way to win over voters, well, then that’s his prerogative.”

Buttigieg said the ongoing national tone under President Donald Trump is that large groups of people, due to their color or sexual orientation, are disparaged. He said that is misguided, so as president he would ensure a much different tone is aired.

Twenty-two candidates have moved through Siouxland in dozens of events this year, meaning decisions will come late for many voters: "People are deciding late. There are too many, way too many candidates," one said.

No. 10 story of 2019: Democratic presidential candidates flock to Sioux City

The Journal begins its countdown of the Top 10 Stories of 2019 in Siouxland, as chosen by Journal editors. The No. 1 story will be revealed on Dec. 30, and the Journal's annual Newsmaker of the Year will be named on Dec. 31.

The rented offices of various sizes and neighborhoods in Sioux City are the place for regional campaign workers to reach out to possible voters mulling candidates. "Everything happens there," the Woodbury County Democratic chair said. 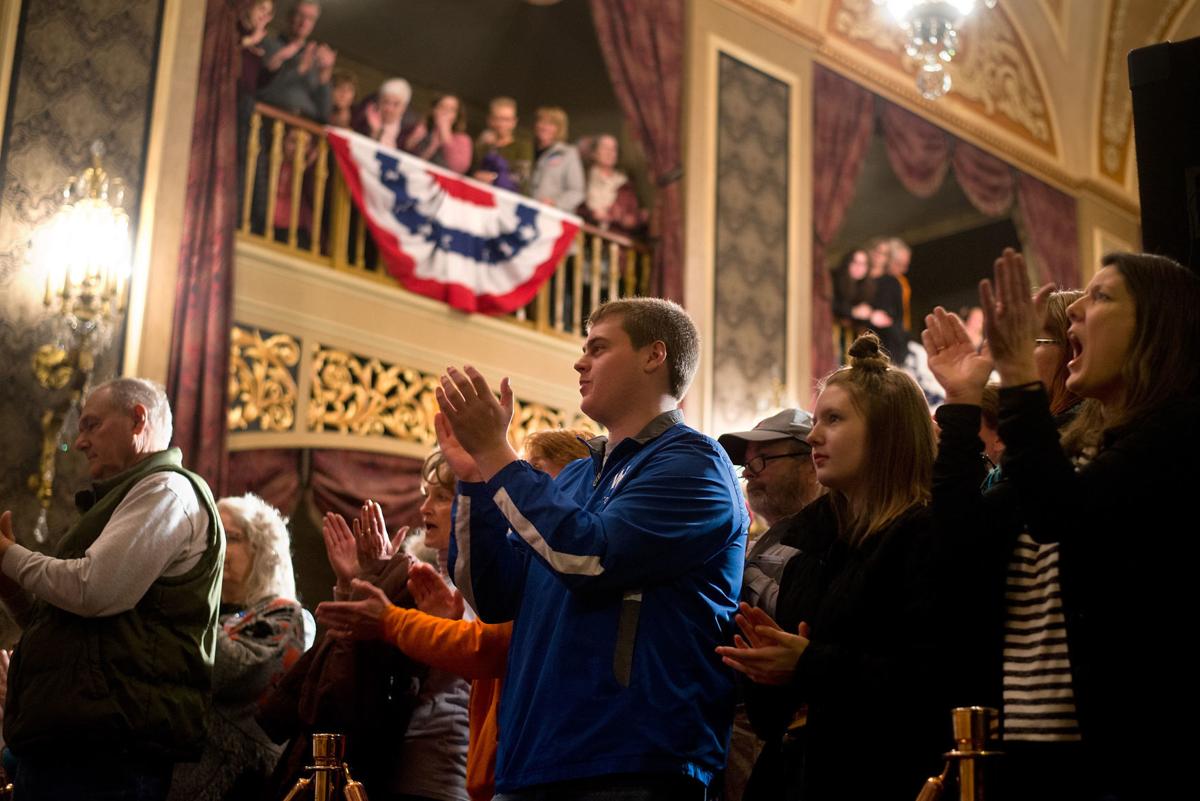 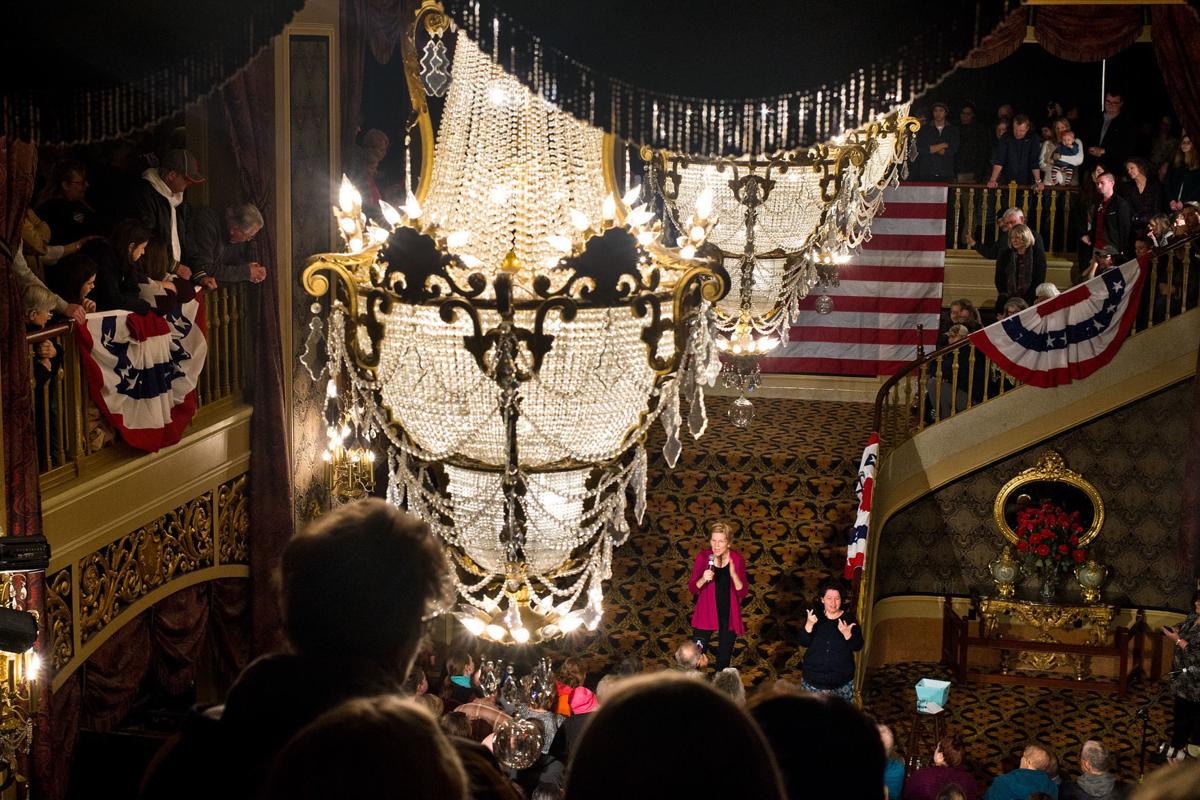