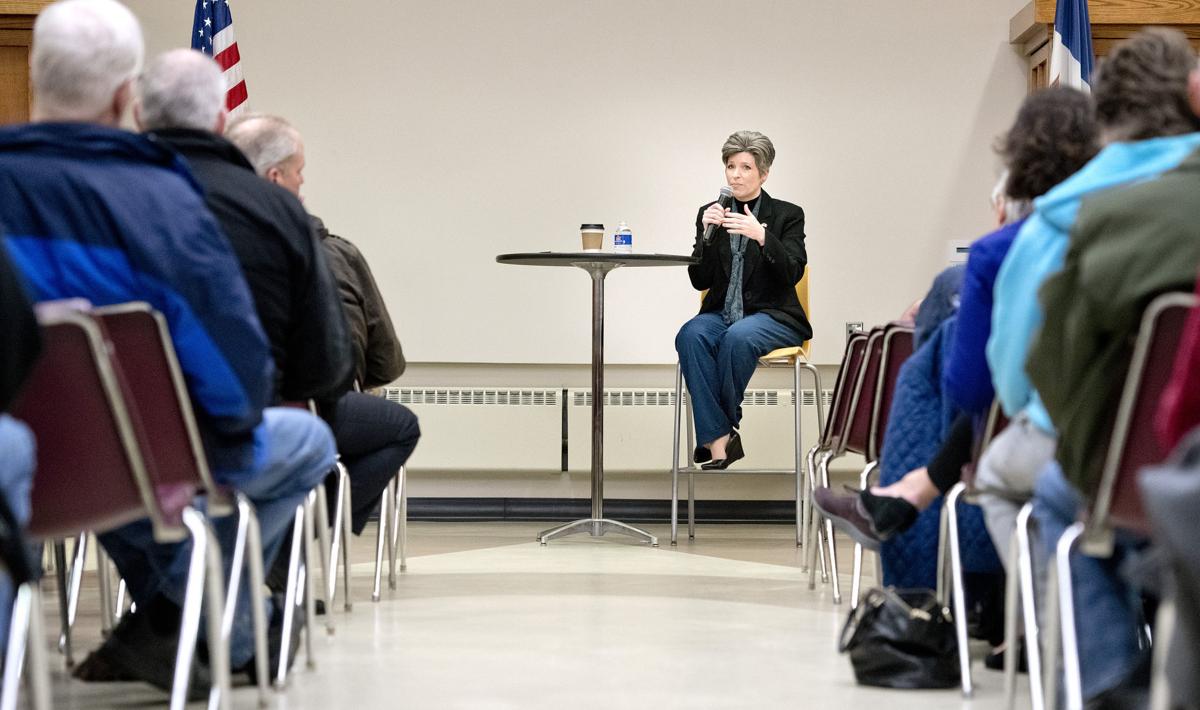 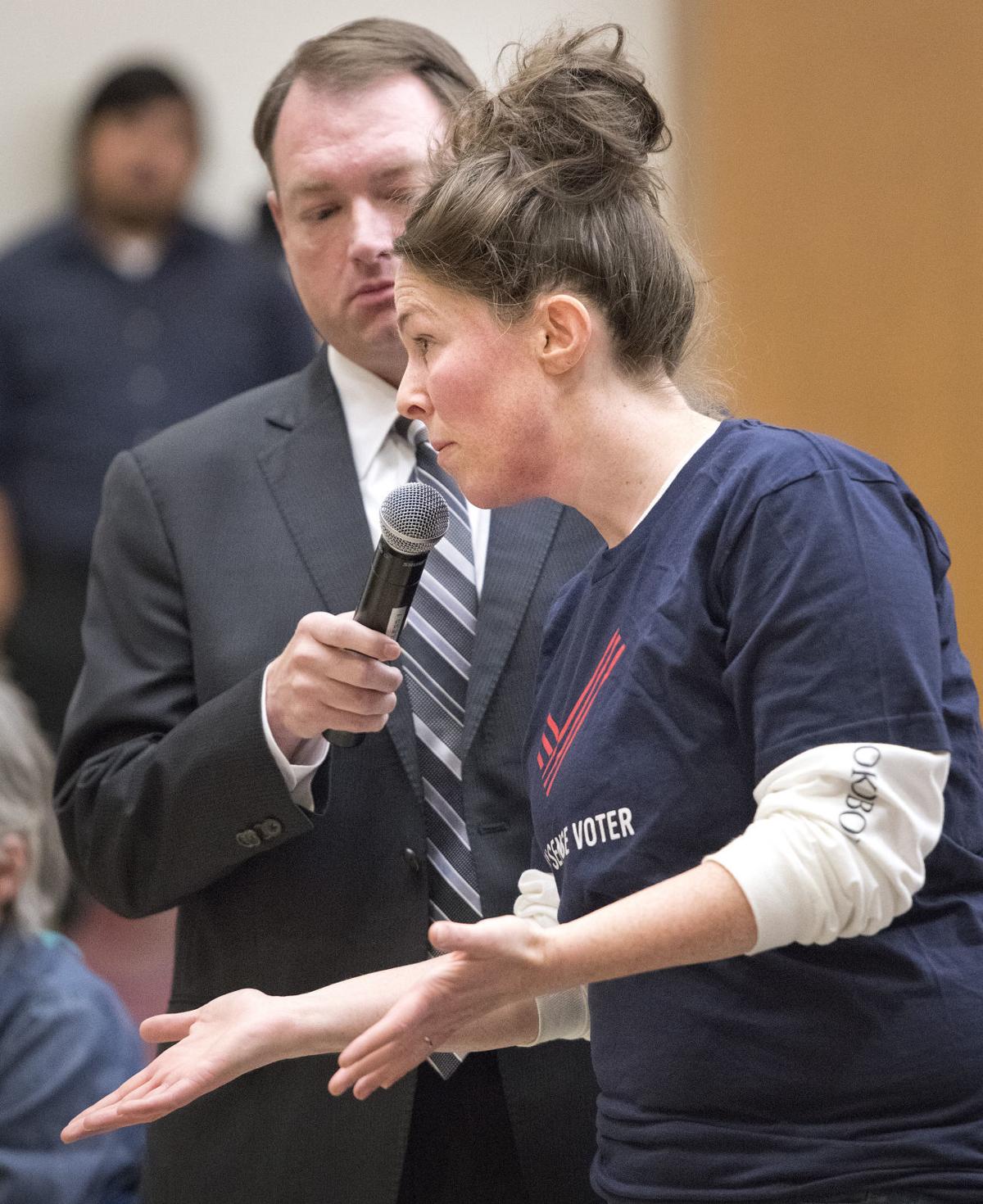 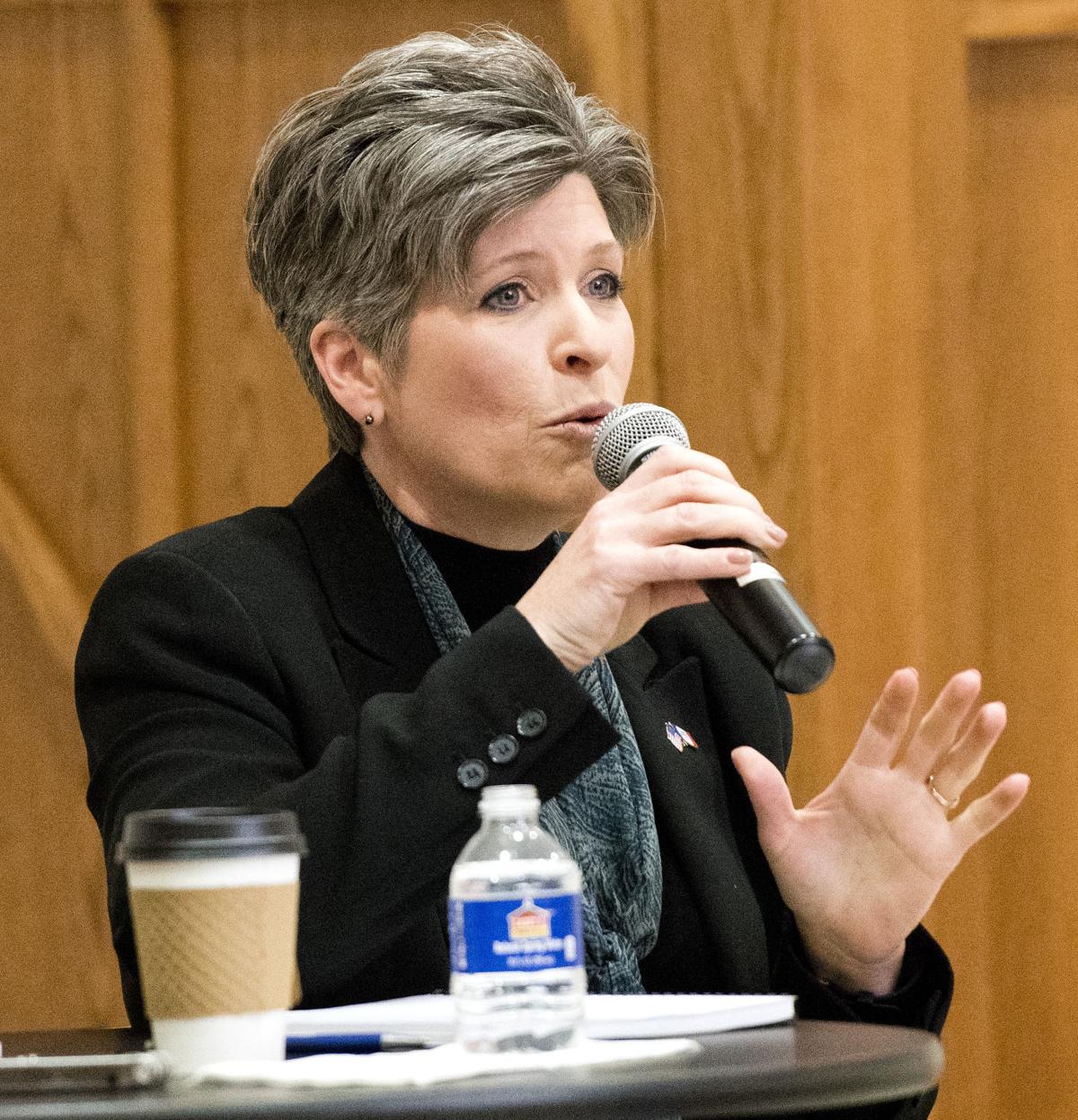 SIOUX CITY -- U.S. Sen. Joni Ernst said she doesn't support moving military budget money to pay for a wall at the border of Mexico and criticized an omnibus spending bill passed by fellow Republicans, but a discussion about guns and student safety dominated her town hall meeting in Sioux City on Wednesday.

More than a hundred people attended the 7:30 a.m. meeting at Morningside. Ernst fielded 18 questions, forgoing opening remarks to get to what was on the minds of Northwest Iowans. Far and away, the biggest topic of the hour was the role of guns in American society and whether, after a mass Florida school shooting last month, there should be restrictions on guns or longer waiting periods to get weapons.

One of the biggest applause moments of the meeting came as Ernst was discussing steps U.S. school officials are taking to become safer. An unidentified man from the back loudly said, "My first-grader has to practice hiding from someone who wants to kill him. That is ridiculous!"

Two people identified themselves as gun owners from families with a tradition of hunting, but said it is time for restrictions on some guns.

Madonna Nitzke, of Sioux City, said, "I am against these military assault-type weapons in our country being used against our children."

Responding to Nitzke, Ernst said, "The Second Amendment is not just there for hunting and fishing, it is also for self-protection."

An AR-15 semi-automatic rifle was used by 19-year-old Nikolas Cruz in the shooting at Marjory Stoneman Douglas High School in Parkland, Florida, that left 17 students and staff dead on Feb. 14.

"The semi-automatic, I believe that people have the right to own those weapons," Ernst said.

That response came after Susan Leonard, of Sioux City, asked Ernst to directly state her stance on raising the age to 21 to buy some weapons, having extended waiting periods to buy guns and banning large capacity clips.

"The waiting period, I would look at that. I am not going to say yes or no," Ernst said.

The Republican senator added that she knows many in the crowd, given their questions and statements, would not like her stance in support of the Second Amendment. Ernst said the key thing is that "law-abiding citizens should be able to own a weapon."

Ernst later added, "What we don't want is to start stripping rights from groups of citizens."

After the meeting, Ernst told the Journal she recognizes the topic of gun control has primacy in the national dialogue and in Iowa after the Florida school shooting.

"Some folks would like to see the Second Amendment gone," Ernst said.

Back in the meeting, the first two questions of the day involved guns. The first questioner, Morningside senior Alison Linafelter, of Sioux City, cited the Parkland shooting as concerning.

Linafelter said too many people are getting off on the tangent of addressing mental health and missing the real scourge in school shooting, which she said is a surplus of guns.

In other topics, Karen Heidman, of Sioux City, cited reports of a floated plan by President Donald Trump to divert money from the military budget to pay for a $25 billion border wall on the southern border.

"Trump thinks the military is now rich, as a result of the recently-passed tax plan,'" Heidman said.

Ernst responded, "We need to make sure they are used for the military and rebuilding...I think it is a bad idea."

Another question about Trump was raised by Erin Hytrek, of Moville. Hytrek cited the investigation by special counsel Robert Mueller into possible links between the 2016 election Trump campaign team and Russian officials.

"I would have to see what the indictment is," Ernst said, adding that it is important that the Mueller investigation be allowed to reach completion.

"Let the investigation go where it may," added Ernst, who was elected in 2014 after serving as a state senator from Red Oak, Iowa.

Arden Jasper, of Sioux City, told Ernst he is a conservative Republican who has big concerns about the large $1.3 trillion omnibus spending bill approved by the Republican-led Congress last week and the tax-cut bill passed in 2017.

"Why do we think this insanity of supply-side economics will work? It does not," Jasper said.

Ernst said she voted against the omnibus bill, but likes the tax cuts and how they will impact federal tax filings by people.

Journal examines pay and benefits for members of Congress

SIOUX CITY | They are paid too much, and produce too little.

SIOUX CITY | Long before she had a chance to impact public policy affecting the U.S. military branches, Sen. Joni Ernst enrolled in the Iowa S…