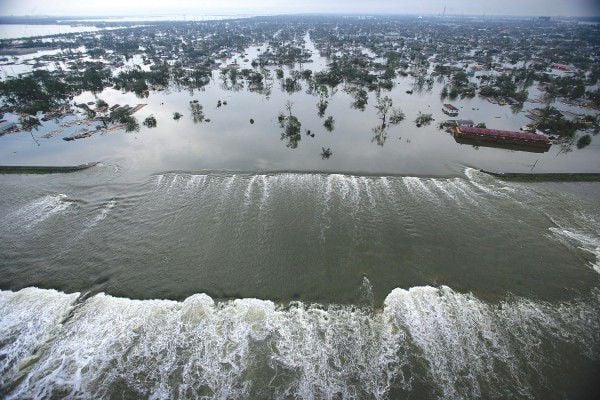 In this Aug. 30, 2005 picture, floodwaters from Hurricane Katrina pour through a levee along Inner Harbor Navigaional Canal near downtown New Orleans, a day after Katrina passed through the city. Top Louisiana officials have denounced Rep. Steve King, R-Iowa, for his comments this week that unfavorably compared Katrina flood victims with western Iowans victimized by recent flooding. 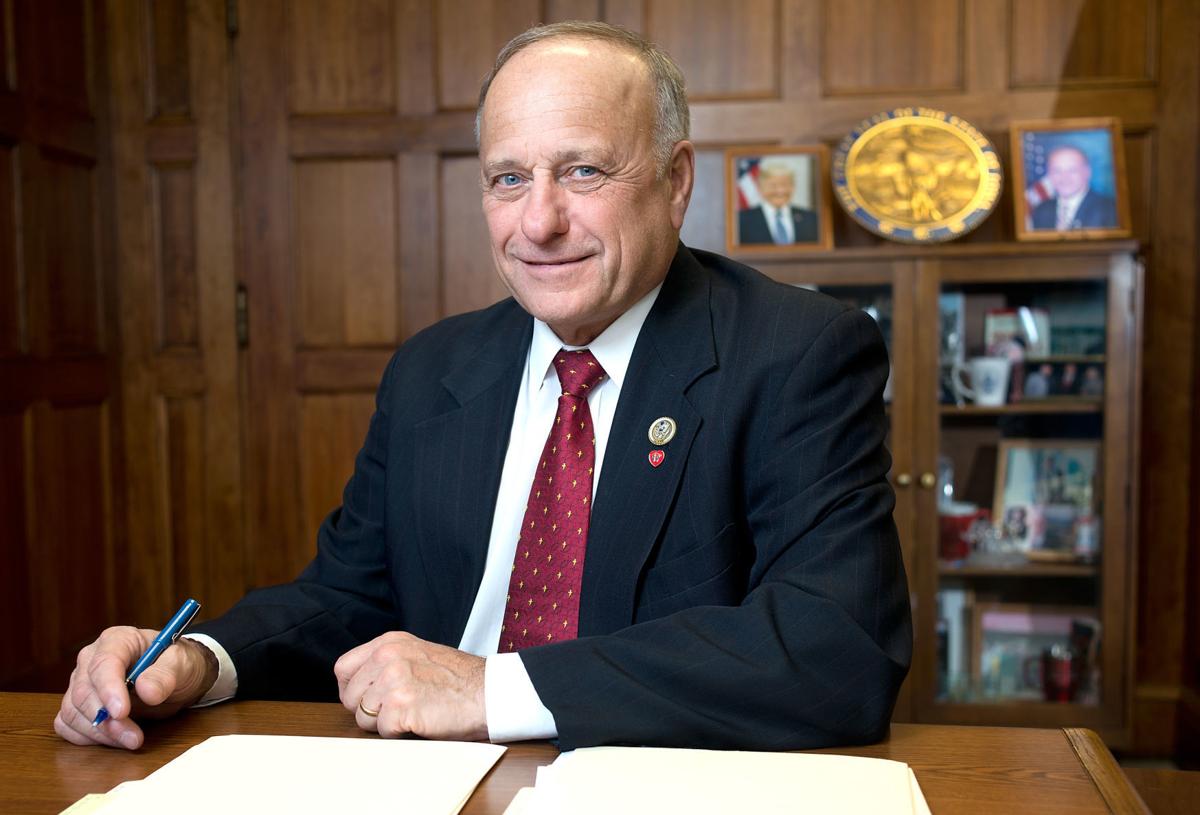 The outcry came after King, during a town hall meeting in Charter Oak Thursday, recounted a conversation with with an unidentified Federal Emergency Management Agency official, who praised Iowans for their willingness to help each other.

"But here’s what FEMA tells me: ‘We go to a place like New Orleans and everybody’s looking around saying, who’s gonna help me, who’s gonna help me?’ ” King told the audience. "We go to a place like Iowa, and we go, we go see, knock on the door at, and say, I'll make up a name, John's place, and say, 'John, you got water in your basement, we can write you a check, we can help you.' And John will say, 'Well, wait a minute, let me get my boots. It's Joe that needs help. Let's go down to his place and help him.' "

"When communities are affected by disasters, we come together to help each other, not tear each other down," Edwards tweeted.

U.S. Rep. Cedric Richmond, a Democrat who represents a large portion of New Orleans, where more than 60 percent of the population is African-American, called King a "white supremacist."

"My heart goes out to all Iowans. Though it unsettles me that @SteveKingIA would dare compare them to the countless victims of Katrina, many of whom lost their lives," Richmond tweeted.

"When people show you who they are, believe them. Steve King is a white supremacist and I won’t stand for it," he added.

King was stripped off his committee assignments and rebuked by the House in January following an uproar over his comments in a New York Times story in which he questioned how the terms "white supremacist" and "white nationalist" became offensive. King has repeatedly claimed he was misquoted, and has denounced white supremacy.

This week, King recalled visiting New Orleans in the aftermath of the 2005 hurricane and widespread flooding. In September 2005, he was one of only 11 House members who voted against a $52 billion aid package for victims of Hurricane Katrina.

King cited his dissenting vote on the need for "fiscal responsibility," saying the federal government needed to develop a comprehensive plan for  how aid dollar would be spent before more money was appropriated. King had voted for an initial $10.5 billion emergency aid package the week before the $52 billion measure came up.

Later, King said that his opposition to Katrina-related funding "probably was my best vote."

At Thursday's town hall meeting in the Charter Oak, King addressed the widespread and prolonged flooding western Iowa and eastern Nebraska that has led to damages estimated at nearly $1.6 billion. Later in the day, King toured Hornick and Missouri Valley, two towns in the 4th District that were briefly evacuated due to flooding.

“Iowans are tough and resilient, and both of these commendable qualities are tested when we experience severe flooding,” King in a news release.

In the news release, the Republican congressman also highlighted his efforts to assist the victims.

“My team was the first to have boots on the ground in the 4th District’s affected areas, and I am working closely with local leaders to help our District recover from this disaster. As the dean of Iowa’s House delegation, and its only Republican, I will not hesitate to use my influence with President Trump to help Iowans gain access to federal flood relief programs."

SLOAN, Iowa -- It seemed like all of Hornick's 225 residents were packed into a room to hear details Friday about the flooding in their tight-…

Flooding in Moville, Iowa: 'Not often you see whitecaps on the highway'

This week's On Iowa Politics covers Steve King's remarks about Hurricane Katrina victims and a legislative special election near Waterloo.

In this Aug. 30, 2005 picture, floodwaters from Hurricane Katrina pour through a levee along Inner Harbor Navigaional Canal near downtown New Orleans, a day after Katrina passed through the city. Top Louisiana officials have denounced Rep. Steve King, R-Iowa, for his comments this week that unfavorably compared Katrina flood victims with western Iowans victimized by recent flooding.