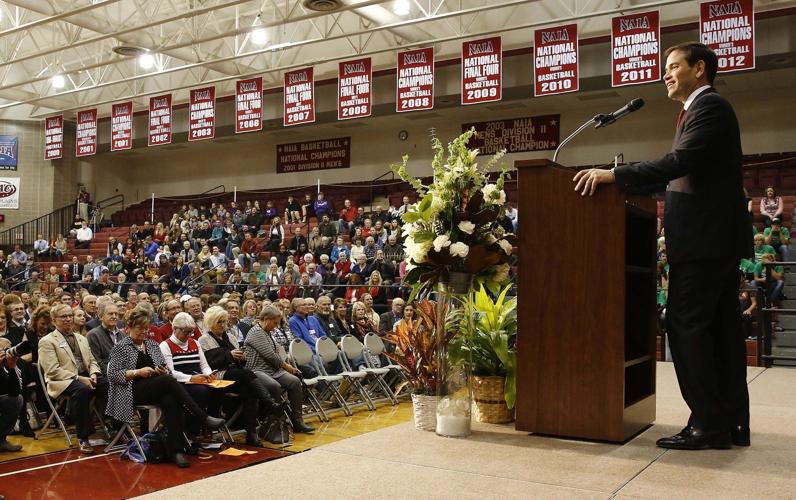 Republican presidential hopeful Marco Rubio speaks during an Oct. 30 GOP forum at Northwestern College in Orange City, in heavily Republican Sioux County, Iowa. Rubio had made a campaign stop in Sioux City earlier in the day.

Republican presidential hopeful Rick Santorum speaks during a forum at Northwestern College in Orange City, Iowa, on Oct. 30. Sioux County, Iowa's most Republican county, is a frequent place for GOP contenders in the lead up to the state's Feb. 1 caucuses.

Sioux County was largely settled by people of Dutch origin more than 100 years ago; Orange City, the county seat, was named for William of Orange, a Dutch prince. Sioux County residents, who pride themselves on thriftiness, church attendance and well-kept property, consistently cast ballots for GOP candidates for county supervisor, governor and president.

Vote totals approach 90 percent Republican, making it the most Republican county in the state, said Jeff Taylor, a professor at Dordt College in Sioux Center.

"(The county) is not only Republican, but superconservative Republican. ... You can't get more Republican than Sioux County," Taylor said.

Van Zee said her family, which isn't originally from Sioux County, had older relatives who were Republicans, Democrats and independents. Since moving to Sioux County in 1996, she's come to vote primarily for Republicans, with a rare exception for voting for Democratic Gov. Chet Culver in 2006.

Van Zee likes the Republican principles of smaller government. "I don't want the government telling me what I have to do or can't do," she said.

Van Zee said she takes a firm stance on defending the sanctity of life, which means that she supports the typical Republican principle against abortion. But she noted some conflict, since for her, being pro-life means supporting people in their twilight years, and Van Zee said Democrats do a better job of funding government programs for the elderly.

Sioux County is also one of the most Republican counties in the nation. Some have joked all the county Democrats could fit into a phone booth.

Voter registration records show that in 2000 Sioux County had 1,648 active Democratic voter registrations and 13,519 Republican registrations. Aside from a surge in 2008 when Obama was first elected, the numbers have changed little over time. Now, there are 14,339 Republicans, while registered no party voters outnumber Democrats, 4,950s to 1,611.

Sioux County Republican Party Chairman Mark Lundberg said having so many Republican voters is important not just for local outcomes but also for statewide races to offset eastern Iowa's Democratic tilt. He pointed with pride to the fact that Republican President George W. Bush won Iowa in 2004 by slightly more than 10,000 votes -- 751,957 for Bush and 741,898 for Democrat John Kerry -- conceivably as a result of Sioux County's 12,000-vote margin for Bush.

"Sioux County by itself can offset a (liberal) Johnson County," Lundberg said

The Sioux County Auditor's Office, which oversees elections, said it isn't possible to quantify how many people vote a straight Republican ticket. Lundberg and Taylor said the significant majority do so.

Taylor said Sioux County has been overwhelmingly Republican since people with Dutch heritage moved there in the late 1800s. He said Sioux County families through "political socialization" pass down beliefs about conservative government primacy over generations.

Taylor said the people come from a Dutch Reformed church heritage, where they have "an unshifting foundation in their biblical interpretation." Those county residents place high value on conservative social principles that run counter to certain liberal stances backed by Democrats nationally over time, the professor said.

"In their view, those are anti-Christian, those are anti-family. ... The folks here are traditionalists. They have not changed with the cultural shifts over time. They are pretty much staying where they were at 30 years ago, 50 years ago. They are not going to go in for progressive kinds of innovations," Taylor said.

Lundberg said Sioux County people run many successful businesses and farms while prizing socially conservative principles that bond families together. Further, he said, they have an individualistic streak and many children attend private Christian schools. He said all those line up with Republican principles to help support businesses and families.

"You have a melting pot of conservative values and economics. You look at our economic result, it is probably about as good as you get in the Midwest," Lundberg said.

"A large number of people in Sioux County are deeply religious. It is a huge part of their lives, not just on Sundays. Unfortunately, a number of them have a narrow scope of issues that they think faith applies to," Van Es said.

Van Zee, 39, said her circle of friends aren't afraid to discuss politics in daily life. She said they've fleshed out their reasons for supporting Republicans beyond family and cultural tradition.

"There is a subculture of us who really are having the conversations. We are not just straight party-line voters -- 'we do it because our parents have done it, we go to church because our parent have always gone to church.'  My generation and younger are believing in being part of the process and making a decision on each issue, versus just toeing the party line," Van Zee said.

Don Nelson, of Orange City, said the chief reason he votes Republican is because the party platform opposes abortion. He agreed with Van Zee that people in the county often discuss politics in daily life.

"My goodness, they are five blocks from where I live, what an opportunity," Nelson said.

Lundberg said Republican officials in the county don't rest on laurels but work to turn out Republicans on election days. He said Sioux County Republicans are self-motivated to vote, but "you always have to keep stirring the pot, keep prodding, just to get people to turn out."

Van Es said being in the minority is a tough reality.

"It is definitely a challenge. But I am finding that more and more Democrats are willing to come out of the closet in Sioux County," Van Es said.

She said some business owners are afraid they "will lose business" if they openly advocate for Democrats. But Van Es said she saw more Democratic candidate yard signs in 2014 than ever before, and she hopes that public presence continues to grow. Van Es said the South used to vote heavily Democratic, then shifted over recent decades to become a Republican stronghold. Her takeaway is that politics can change over time.

"Things can really turn around. I guess I am a ridiculous optimist. I don't know that we will ever be the majority, but I think that we can move toward closing the gap. The reason I think that is, there are young adults living here, settling here, whose political values are different than the majority, and I think that is going to pick up speed," Van Es said.

Hillary Clinton to campaign in Sioux City on Friday

Democratic presidential candidate Hillary Clinton will make her third Sioux City campaign stop of the year in a Friday event.

Santorum to campaign in Siouxland in week ahead

Here's a list of upcoming visits to Siouxland by 2016 presidential contenders:

Sanders to campaign in Siouxland in week ahead

Here's a list of upcoming visits to Siouxland by 2016 presidential contenders:

Roughly 80 to 100 times per day, a parent or other visitor will wait outside the single public entrance to the Woodbury Central K-12 building, waiting to be let in after hitting a buzzer on the door.

The big question is whether Democrats in overwhelmingly Republican South Dakota  can field formidable candidates and raise the campaign money to make a dent 14 months from now.

Ramsay Trix hops into his Toyota Camry and tools 300 miles along the flat expanse of Interstate 29 to attend presidential campaign events. Nearly 10 times he's made the trip south from his home in Fargo, North Dakota, to Northwest Iowa cities and towns.

Four GOP presidential hopefuls took the stage Friday at Northwestern College in an attempt to win the hearts of Iowa’s most heavily Republican county.

Pope Francis jokes about needing tequila for his hurt knee

Pope Francis jokes about needing tequila for his hurt knee

Republican presidential hopeful Marco Rubio speaks during an Oct. 30 GOP forum at Northwestern College in Orange City, in heavily Republican Sioux County, Iowa. Rubio had made a campaign stop in Sioux City earlier in the day.

Republican presidential hopeful Rick Santorum speaks during a forum at Northwestern College in Orange City, Iowa, on Oct. 30. Sioux County, Iowa's most Republican county, is a frequent place for GOP contenders in the lead up to the state's Feb. 1 caucuses.