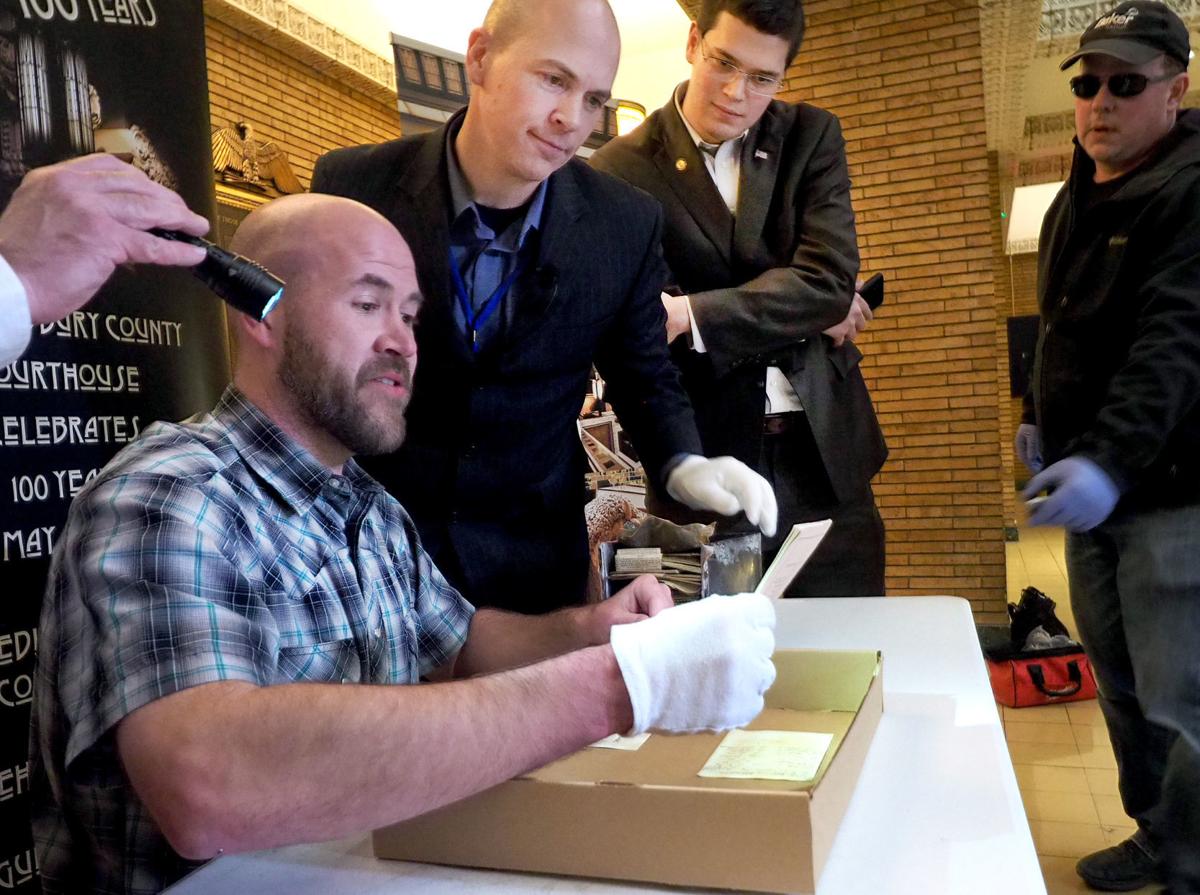 Tom Munson, archives manager at the Sioux City Public Museum, removes items from a time capsule as Supervisors Jeremy Taylor and Matthew Ung at the Woodbury County Courthouse on Nov. 21. County crews extracted the original courthouse time capsule from 1918 in advance of 100th building commemoration in May. 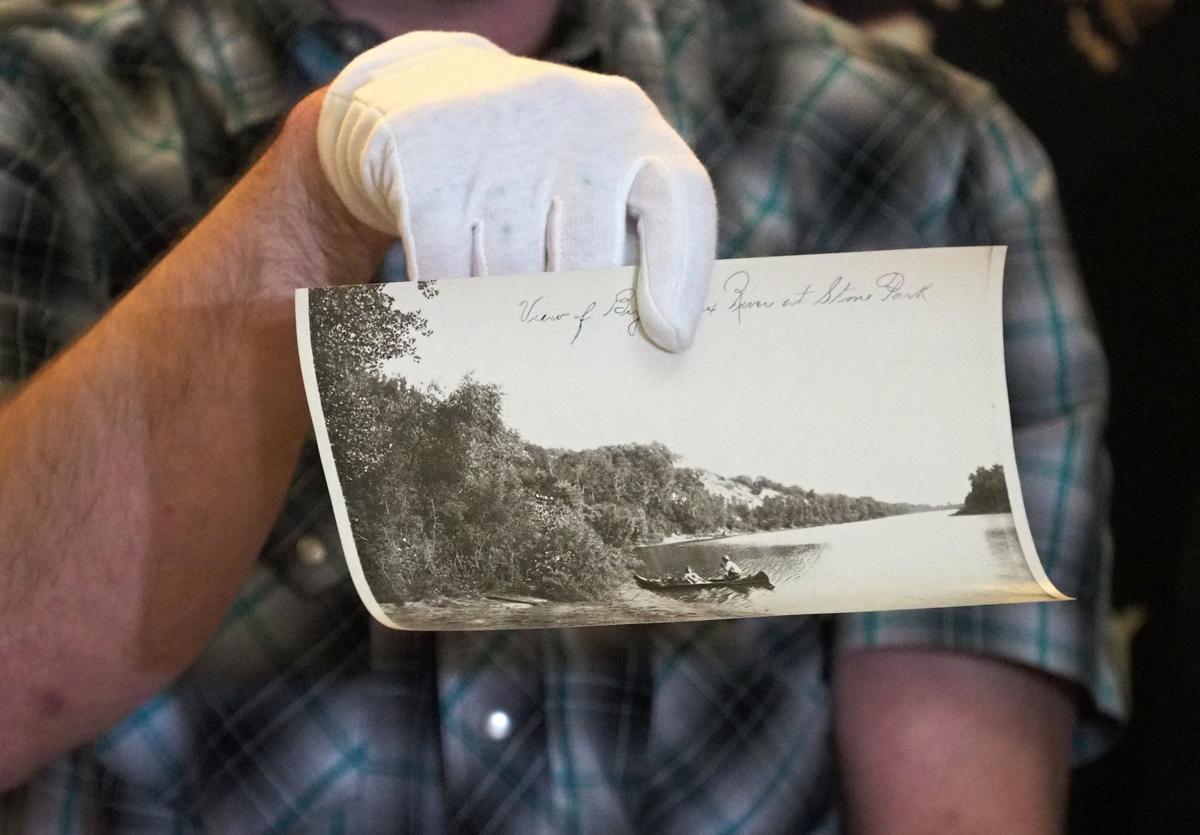 SIOUX CITY | In the early afternoon of July 10, 1916, a slew of Woodbury County officials made sure interesting Siouxland items from the prior 40 years were placed into a cornerstone box, as a new county courthouse was being constructed.

What they found was as expected, since a master list of the capsule items had been kept from 1916, just two years before the courthouse opened. That included a bunch of Sioux City newspapers, minutes from county board of supervisors meetings, foreign and domestic coins that dated from 1899 to 1915 and pamphlets from lots of men's lodge organizations, which are no longer functioning.

There were also scads of photos, including of President Woodrow Wilson, a Sioux City tuberculosis hospital, downtown businesses and Stone State Park, only four years after it opened.

There were lots of bemused looks as it took 15 minutes to pry open the cornerstone, then again as officials such as Sioux City Public Museum Archives Manager Tom Munson raved about what was pulled out.

That came on the heels of one of Munson's first statements, that he expected so many newspapers in the capsule to deteriorate.

"I think I am going to see dust, not to be pessimistic," he said.

Forty-five minutes later when the unveiling was completed, Munson noted the items, some of which dated to the 1860s, showed little wear: "It is better than dust, far better than dust."

A week ago, county crews extracted the time capsule from the cornerstone at a cost of less than $5,000. The iron box had to be drilled out of the granite from the northwest corner of the building to avoid structural problems caused by colder weather.

The public event on Tuesday was designed in part to build excitement for the 100th building commemoration, which will be held May 1-5, 2018.

Designed by famed architect William Steele, the courthouse was placed on the National Register of Historic Places in 1973 and designated as a National Historic Landmark in 1996. It's considered the largest publicly owned Prairie School-design buildings in the world.

Woodbury County Building Services Department Director Kenny Schmitz and consultant Shane Albrecht took 15 minutes, longer than expected, to get the capsule open. They used a rotary tool, then big pliers, then eventually pounded on a screwdriver. Schmitz said the extra labor was necessary because there was an unexpected second seal of the capsule on the inside.

Woodbury County Historical Committee members are setting the centennial celebration events. Committee member Jim Jung raved about the items as they were pulled out by Munson, who was wearing gloves so not to harm the pieces.

Those items will now go into a Sioux City Public Museum display.

About 30 people watched in the courthouse atrium, and another 10 from the County Attorney office and other court workers observed from the floor above. Committee member Jeremy Taylor noted the Tuesday unveiling of the capsule lacked the musical flourish that occurred with the 1916 cornerstone ceremony.

"We don't have the Elks Quartet with us to sing today," Taylor deadpanned.

In spite of the differing aspects of the 1916 and 2017 events, it was fantastic to watch people get excited, he added.

"It was worth it to see the excitement on historians' faces," Taylor said.

SIOUX CITY | A century-old time capsule was removed from the cornerstone of the Woodbury County Courthouse Tuesday, in preparation for the lan…

Woodbury County 100th celebration likely to be held May 2018

SIOUX CITY | When a major public building with distinctive architectural features reaches an important birthday milestone, it is time to have …

SIOUX CITY | Gray Thursday is starting to make the torrent -- or the insanity, in the view of some -- associated with Black Friday shopping fa…

SIOUX CITY | A record high temperature was reached Thursday in Sioux City, and the warming trend will continue for many days.

SIOUX CITY | Siouxlanders moved in large numbers to kick off the holiday shopping season on Thursday and Friday, and law enforcement authoriti…

SIOUX CITY | A holiday craft event for young children is scheduled between 10 and 11:30 a.m. Saturday at the Sioux City Public Museum, 607 Fourth St.

SAC CITY, Iowa | The Rolling Hills Community Service Region Board expressed reluctance about a request from Woodbury County to join the region…

SIOUX CITY |  "Star Wars: The Last Jedi" began showing nationwide Thursday evening, and people in Siouxland were among those who flocked to theaters.

100 years of the Woodbury County Courthouse

SIOUX CITY -- With a special building that has been around for 100 years, Woodbury County officials have set a lot of ways to experience and c…

SIOUX CITY -- Jason Heger has lived just east of Sioux City on the 180th Street gravel road for 10 years, and said people who came to his pick…

THURSTON, Neb. -- State Sen. Joni Albrecht, of Thurston, on Thursday announced she will seek a second term in the District 17 seat in the Nebr…

The heating and cooling system in the century-old building, which was designated a National Historic Landmark in 1996, has been dogged with problems in recent years.

Tom Munson, archives manager at the Sioux City Public Museum, removes items from a time capsule as Supervisors Jeremy Taylor and Matthew Ung at the Woodbury County Courthouse on Nov. 21. County crews extracted the original courthouse time capsule from 1918 in advance of 100th building commemoration in May.