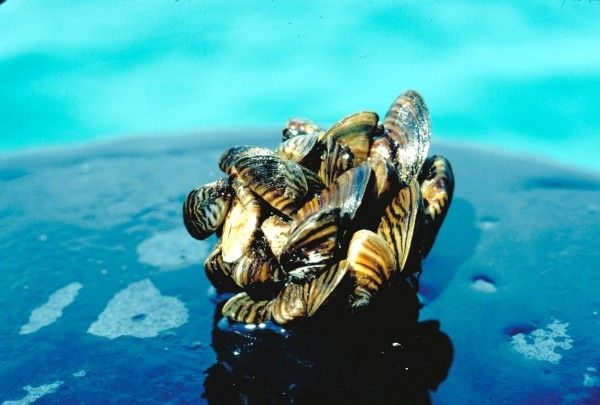 In this undated image from the Center for Great Lakes and Aquatic Sciences, a group of zebra mussels taken from the Detroit River between Michigan and Ontario, Canada, is shown. Zebra mussels have been found in the Red River. 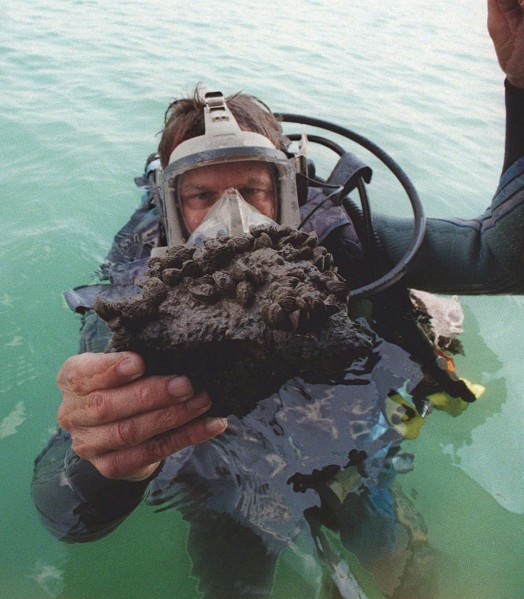 Tim Early, of the Aquatic Research Institute outside Chicago, shows zebra mussels on a rock formation in Lake Michigan in 1998. The invasive species has been detected in Iowa waterways. 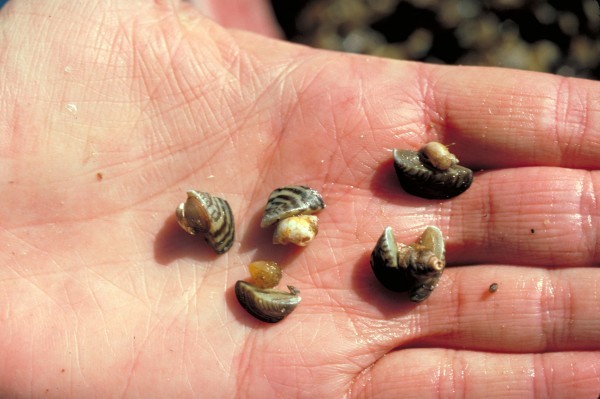 In this undated image from the Center for Great Lakes and Aquatic Sciences, zebra mussels taken from the Detroit River between Michigan and Ontario, Canada, are shown. Four zebra mussels have been found attached to boat hoists in East Okoboji Lake.

OKOBOJI, Iowa | Tim Sather is worried about the damage a small aquatic hitchhiker could do to the Iowa Great Lakes.

His concern isn't only for the threat zebra mussels pose to the lakes themselves, but also for the potential harm to a region that depends on the popular bodies of water for a flourishing economy.

"We're constantly trying to educate people on the issue because once they hit and reproduce, it's a huge problem," said Sather, service adviser at Okoboji's Oak Hill Marina.

A few zebra mussels have turned up in Iowa's Great Lakes, said Mike Hawkins of the Iowa Department of Natural Resources, but that doesn't mean an infestation is imminent.

The DNR has found four juveniles -- one alive and the shells of three others -- attached to boat hoists in East Okoboji Lake. Further tests in August, their peak reproductive period, could be more conclusive.

"It's certainly possible they could fizzle out," Hawkins said.

Unlike the mobile mussels that are native to the Iowa Great Lakes, zebra mussels attach themselves to hard substructure and remain sedentary, similar to a barnacle, he said.

The small striped intruders, believed to be native to eastern Europe, aren't new as an invasive species, Hawkins said, but they are quickly spreading to more bodies of water.

"We've had them in Iowa for quite some time. They started in the Mississippi (River) and since then they've spread west," Hawkins said. "They do hop around a bit but, really, they follow the pattern of boat traffic."

The best way to prevent the spread of zebra mussels is to avoid inadvertently giving them a ride from one body of water to another, he said. That way, the mussels' microscopic juvenile stage, called veligers, can't spread to new territories.

"If people are transporting anything that's been in the water, like a boat or a Jet Ski, they need to clean, drain, and dry," Hawkins said. "You can stop by a power washer and try to get everything that touches the water, trailer included. If you can't get at it with the washer you can use a mild bleach solution to flush your bilge and run through your motors."

In fact, Iowa law requires that all water be drained from boats leaving a body of water and all aquatic plants be removed. The Aquatic Invasive Species Law, which took effect July 1, is meant to quell the spread of zebra mussels and other invasive species.

"They filter a lot of water, about a quart a day for an adult," he said. "A lot of phytoplankton and zooplankton are filtered out and not available for the native life."

Water in a lake infested with zebra mussels increases in clarity, and the clear water allows sunlight to penetrate deeper, changing the lake's natural life cycle, he said.

Sather said he'd like to see more wash station at public boat ramps to keep the mussels from invading the lakes.

"Sure, there are costs, but you can't be too careful," he said. "We're here to educate, but if there aren't any facilities to wash or flush the boats, then that's something to address, and that's a spot where we're lacking. Someone needs to take the bull by the horns."

"We take a look at everything going into the water, and we have a few power wash stations we can direct them to if need be," Hawkins said. "There are commercial operations available that can work instead of dealing with the logistics of installing new wash stations everywhere."

Milford Utilities has its own reasons for wanting to combat the spread of zebra mussels, which can wreak havoc on utility pipelines, said Eric Stoll, the company's general manager. An infestation could block water pipes leading from Browns Bay in West Okoboji Lake to the company's treatment plant in Milford.

"The biggest fear is that we have just one water line that feeds into our power plant," Stoll said. "If that's blocked by zebra mussels, then we can't even get the raw material to make our drinking water."

Milford Utilities is looking into several approaches to protect the two miles of pipeline leading from the intake pipe to the plant in Milford. Those approaches include installing an alternate piping system and using a copper sulfate solution that prevents zebra mussels from attaching to the underwater infrastructure.

Sather hopes it doesn't get to that point. His main concern is preventing an infestation in the first place and preserving the natural condition of the lakes

"It's terrifying what they could do to our economy," Sather said. "And what they can do to what brings so much business and pleasure to the area.

The law states that all water must be drained from any "water related equipment" leaving a body of water.

Water related equipment can be defined as, but is not limited to, boats, docks, rafts, trailers, tools and boat lifts.

The AIS law also requires all water to be drained from portable bait containers and live wells.

Drain plugs for all watercraft must be removed the entire time the craft is being transported.

The fine for failing to drain the water is $75.

The arrival of fall Sunday gives environmental officials a chance to step back and examine efforts to prevent the spread of invasive species in the Iowa Great Lakes.

As summer approaches, boats will be out in large numbers, traveling from lake to lake to enjoy a summer on the water. The Iowa DNR is remindin…

Greg Stoner of the Missouri Dept. of Conservation provides quick tips on how to prevent the spread of zebra mussels. http://www.mdc.mo.gov/nat…

Meeting will focus on zebra mussels

The Iowa Great Lakes community has been concerned about the spread of zebra mussels ever since the first signs were found two years ago.

In this undated image from the Center for Great Lakes and Aquatic Sciences, a group of zebra mussels taken from the Detroit River between Michigan and Ontario, Canada, is shown. Zebra mussels have been found in the Red River.

Tim Early, of the Aquatic Research Institute outside Chicago, shows zebra mussels on a rock formation in Lake Michigan in 1998. The invasive species has been detected in Iowa waterways.

In this undated image from the Center for Great Lakes and Aquatic Sciences, zebra mussels taken from the Detroit River between Michigan and Ontario, Canada, are shown. Four zebra mussels have been found attached to boat hoists in East Okoboji Lake.