"It will destroy my industry," said Ivener, a Sioux City businessman who installs solar panels for smaller users. "They're going to show that the legislature is in the palm of MidAmerican (Energy's) hand. So that if you are going to spend that money for a solar system, what would make you believe that next year they're not going to come out and say, 'Well, no net metering at all'?"

MidAmerican, which serves a large area of western Iowa, and other rate-regulated utilities would be allowed to charge solar customers for their use of the electric grid and and put the revenues toward infrastructure maintenance, under a bill approved by the Senate last week. The bill, Senate File 583, passed 28-19 vote with mostly Republican support.

A similar bill, House File 669, has passed a House committee and is awaiting full debate in the chamber. It would permit rate-regulated utilities to charge solar panel owners $330 a year.

Current customers would be grandfathered in, so they would see no rate change.

Proponents of the legislation point out Rural Electric Cooperative and municipal utility solar customers share in the infrastructure cost, but solar customers of the rate-regulated utilities do not.

Don Kass, a member of the Plymouth County Board of Supervisors, favors the legislation. He isn't fond of the various incentives given to solar panel owners, such as tax credits.

"The so-called green energy movement, while commendable, also has to be couched in reality," Kass said. "When you get this far north, things like solar don't work as well as they do, say, in Florida."

But Ivener and others point out that solar power has becoming increasingly popular in rural Iowa as farmers and other small businesses look to reduce their electric costs.

The firm has also completed solar roof arrays on a host of commercial and residential buildings in Sioux City and other area cities.

Statehouse Democrats proposed an amendment excluding farmers from the new solar fees, but it was defeated with most Republicans voting against it.

Solar panels are commonly promoted as a cost-effective energy solution due in large part to "net metering," which allows the owners of solar systems to sell electricity back to the grid during times of high power production. Those who oppose the legislation say it would tilt the economics of net metering to such a degree that solar would be less economically viable.

According to the Solar Energy Industries Association, as of the fourth quarter of 2018, Iowans had installed 96 megawatts of solar capabilities, enough to power 10,138 homes. The state gets roughly 0.14 percent percent of its electricity from solar, and solar is believed to support 844 jobs in the state.

For its part, MidAmerican has been a major backer of the legislation. In February, the utility company released a statement saying the current system shifts the costs of solar panels from the owners of the panels to other customers.

"Growth is possible when policies allow all customers to benefit from renewable energy. If this legislation can fix the cost-shift, then solar energy can have an even brighter future in Iowa, just like wind has experienced in the past decade," Adam Wright, MidAmerican Energy president and CEO, said in the statement. "Common sense legislation focused on keeping costs low and affordable for everyone provides the best opportunity to grow solar in Iowa."

Ivener said the utility would prefer not to give solar panel owners credit for their electricity via net metering; the credit given to those customers is higher than what MidAmerican pays for electricity wholesale.

Solar panel owners, Ivener said, pay for infrastructure as it is, just as all other power customers do.

Meanwhile, Paul Rekow, a member of the Iowa Solar Energy Trade Association and a renewable energy advocate, said the legislation is just an attempt to do an end-run around the Iowa Utilities Board, which he says should be in charge of these policy decisions.

State legislators get tour of solar-powered farm near Merrill

Recent heavy advertising/promotions indicate that the use of solar panels is a version of theft, using power lines on a heavy basis without co…

A roundup of legislative and Capitol news items of interest for Monday, March 18, 2019:

Power restored to most NW Iowa customers; for some, power could be out into weekend

HULL, Iowa -- MidAmerican Energy said Friday it has restored power to thousands of customers who lost service after an ice storm and high wind…

DES MOINES --- Utility companies could charge an additional fee on solar energy users under a proposal being considered by state lawmakers.

DES MOINES -- Legislation that won bipartisan approval in the Iowa House will add a supplemental registration fee that, when fully phased in, …

SOUTH SIOUX CITY -- Don't mix meat or dairy products with your compost, lest it become smelly and attract raccoons.

In Iowa, MidAmerican already retired two coal-burning units in Council Bluffs, and converted another in Bettendorf from coal to natural gas. 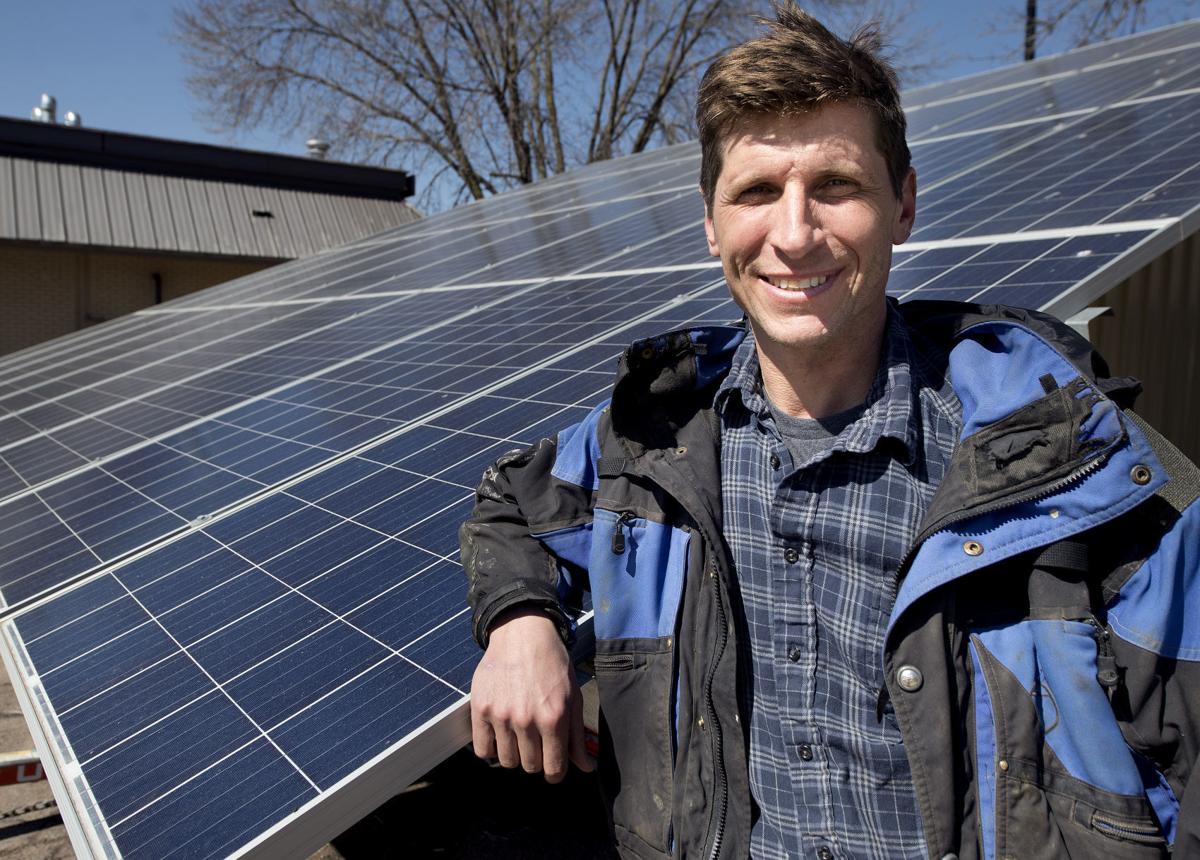 Sioux City businessman Dolf Ivener poses Thursday at a set of solar panels behind Stone Bru, 4243 Stone Ave. in Sioux City, that were installed and owned by Ivener. The two are against a bill that would allow energy companies charge a fee to people who generate solar energy. 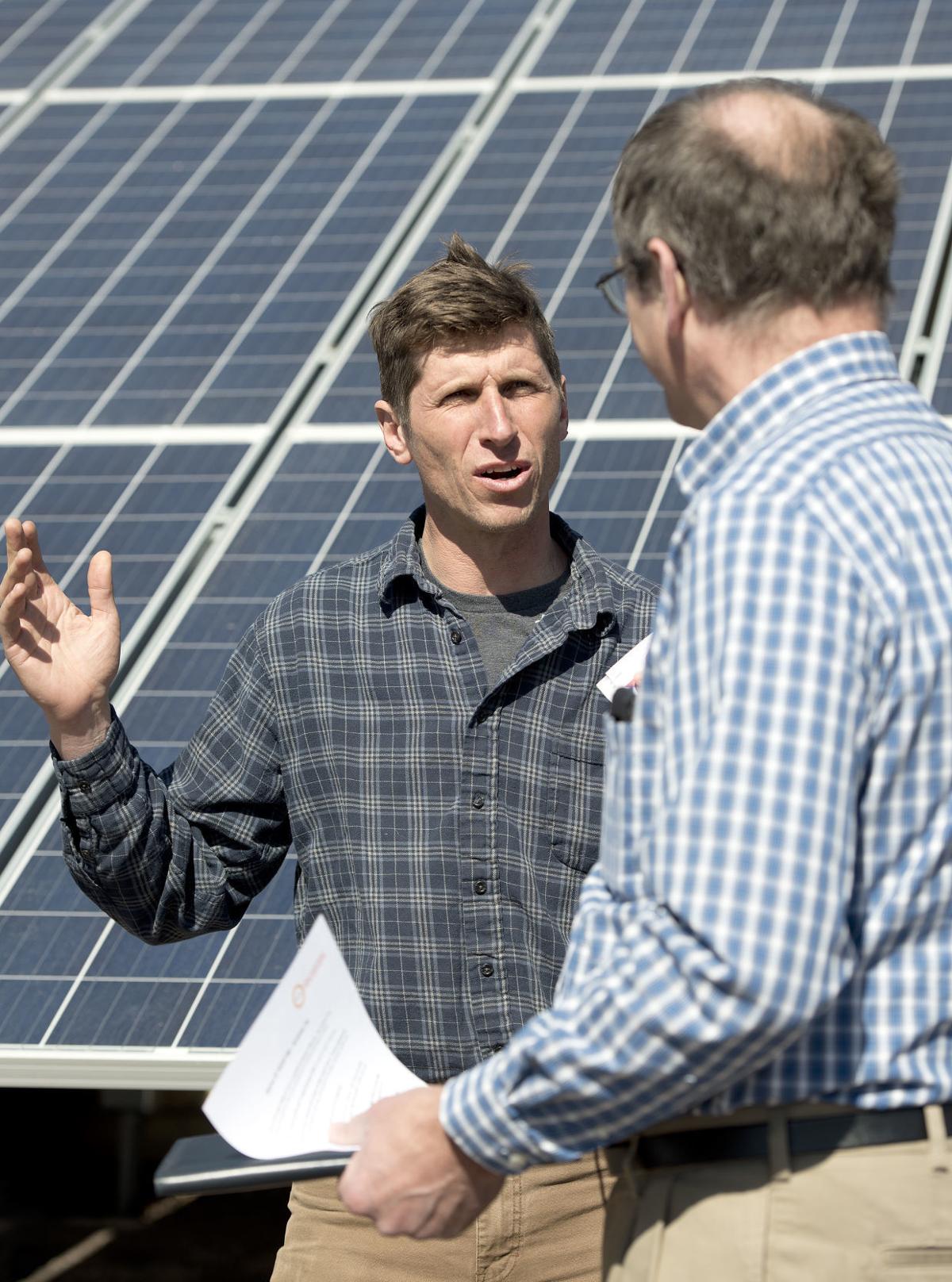 Sioux City businessman Dolf Ivener and Paul Rekow of Spencer, a member of the Iowa Solar Energy Trade Association, talk Thursday at a set of solar panels behind Stone Bru, 4243 Stone Ave. in Sioux City, that were installed and owned by Ivener. The two are against a bill that would allow energy companies charge a fee to people who generate solar energy. 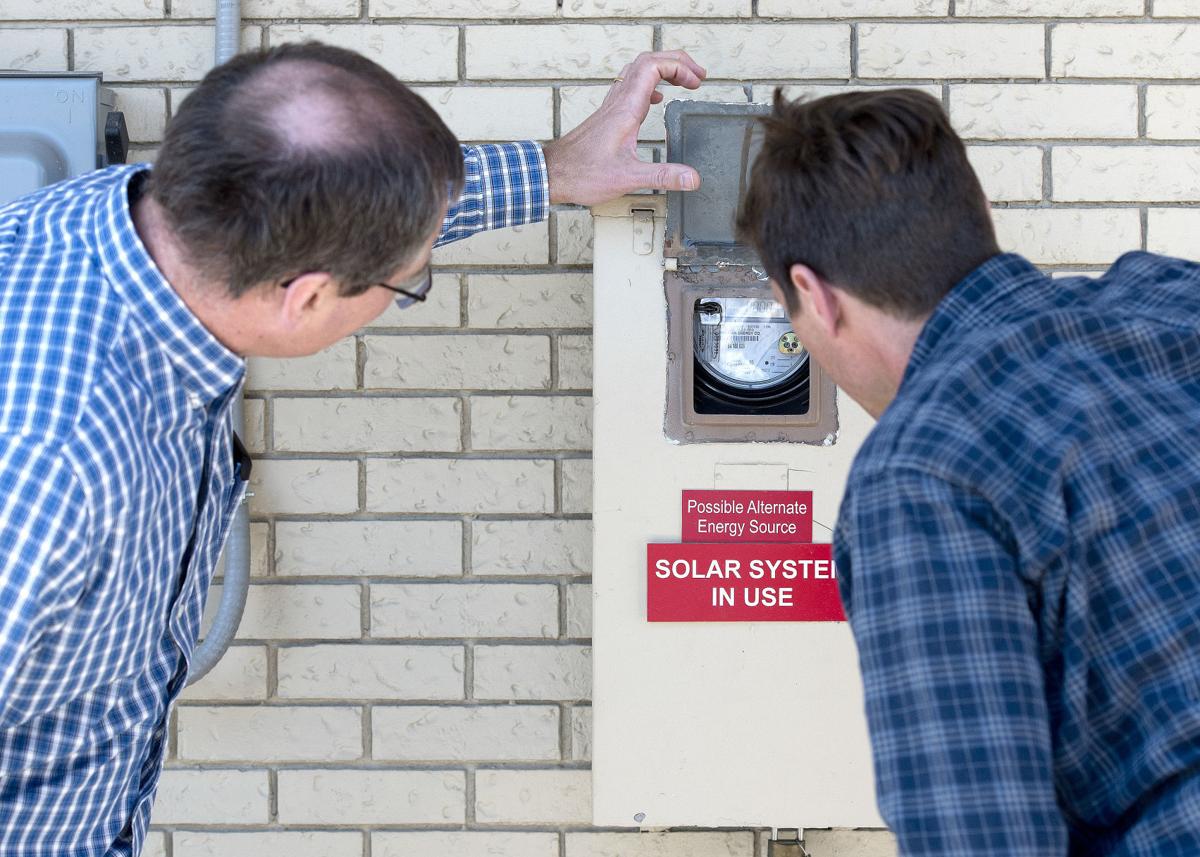 Paul Rekow of Spencer, a member of the Iowa Solar Energy Trade Association, left, and Sioux City businessman Dolf Ivener look at a meter that measures the energy flow from a solar unit Thursday behind Stone Bru, 4243 Stone Ave. in Sioux City, that were installed and owned by Ivener. The two are against a bill that would allow energy companies charge a fee to people who generate solar energy.