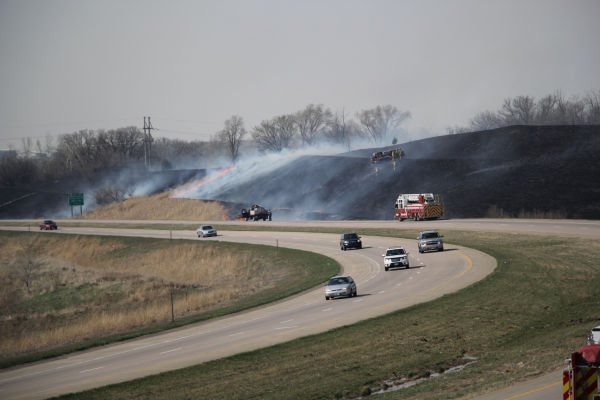 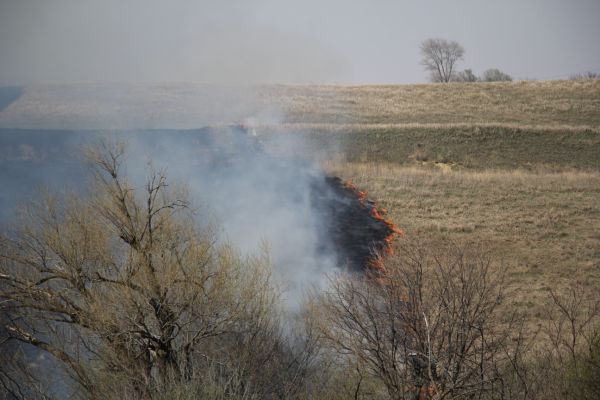 A large grass fire burned off near the northbound lanes of U.S. Highway 75 on Saturday afternoon. 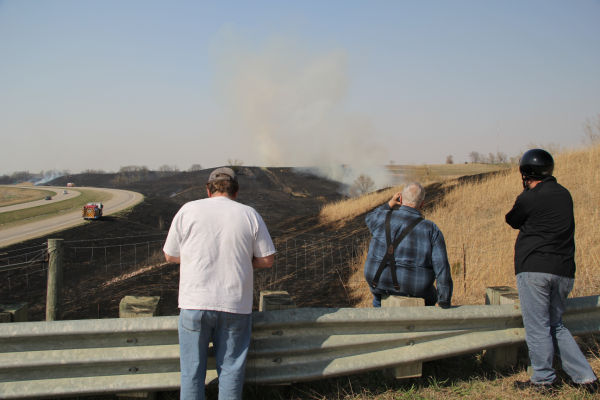 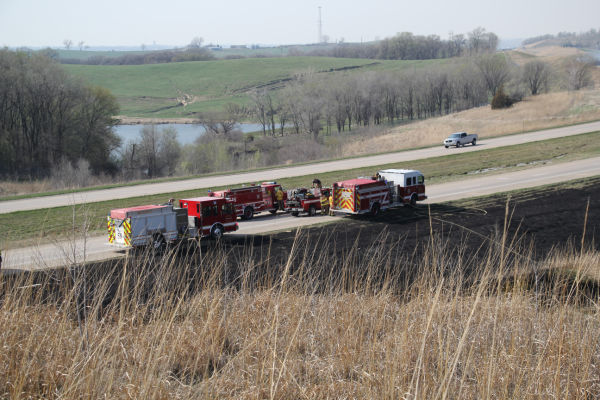 A large grass fire burned off of the northbound lanes of Highway 75 on Saturday afternoon.

SIOUX CITY | Several fire departments battled a massive grass fire along the northbound lanes of U.S. Highway 75 near the Correctionville Road overpass on the east side of the city on Saturday.

The fire was first reported around 3:30 p.m. and spread northeast of the highway due to strong winds that persisted throughout the afternoon.

Sioux City police Lt. Rex Mueller said traffic was rerouted westbound on Gordon Drive and directed to Lewis Boulevard. However, he said about a dozen or so cars went around the police block at the entrance ramp onto Highway 75 north at Gordon Drive.

No citations were issue because there weren’t enough police personnel at the time, said Mueller. Later the Iowa Department of Transportation assisted and no more vehicles were able to enter the highway.

“We just did did traffic control,” Mueller said. “The fire department had the hard job.”

The northbound lanes of Highway 75 reopened around 6:50, said Mueller.

Locals residents gathered on the Correctionville Road bypass to watch as firefighters battled the fire which spread to other areas farther from the highway.

Bob Foulk, who lives close to where the fire was burning off of Correctionville Road, said he wasn't worried the fire would hit his house.

"Not with the way wind was blowing," Foulk said, indicating it was blowing away from his residence.

He said the fire department quickly kept the fire from spreading to nearby houses.

"These guys are earning their money today," Foulk said.

"We failed as a board," one member, Monique Scarlett, said.

Cynthia Tener says in the lawsuit that nurses and another doctor informed her of concerns about the physician's failure to obtain proper consent from patients, performing unsafe add-on procedures during surgeries and falsifying paperwork.

Tim Masters, a technician with the National Weather Service in Sioux Falls, said wind gusts across the Weather Service's coverage area were in the 70 to 100 mile-per-hour range. He said the peak wind gust at Sioux Gateway Airport was 52 miles per hour.

Teachers describe chaos and feeling unsafe — and many are telling families and fellow teachers to avoid the district.

SIOUX CITY -- A Sioux City woman has been sentenced to five years in prison for throwing her 16-month-old son, causing a skull fracture.

A contractor hired to decommission and demolish retired coal-burning units at MidAmerican Energy's Port Neal complex is seeking more than $1.4 million in damages it says were caused by the behavior of the energy company's representative to the project.

Donawa, who was hired as director in November 2021 at an annual salary starting at $70,000, said he believes Brown was unhappy he was selected for the position over another member of his staff. Brown described Donawa as unqualified for the position.

She'd love to hear the words from him in person, but instead must settle for a visit to his grave, telling him about the latest of her many accomplishments since he died on Oct. 4, 2020.

Per a release from the Iowa Department of Corrections: The Walthill, Neb. resident was admitted to the Sioux City Residential Treatment Facility on Feb. 11, 2022 and failed to report on Friday.

A large grass fire burned off near the northbound lanes of U.S. Highway 75 on Saturday afternoon.

A large grass fire burned off of the northbound lanes of Highway 75 on Saturday afternoon.