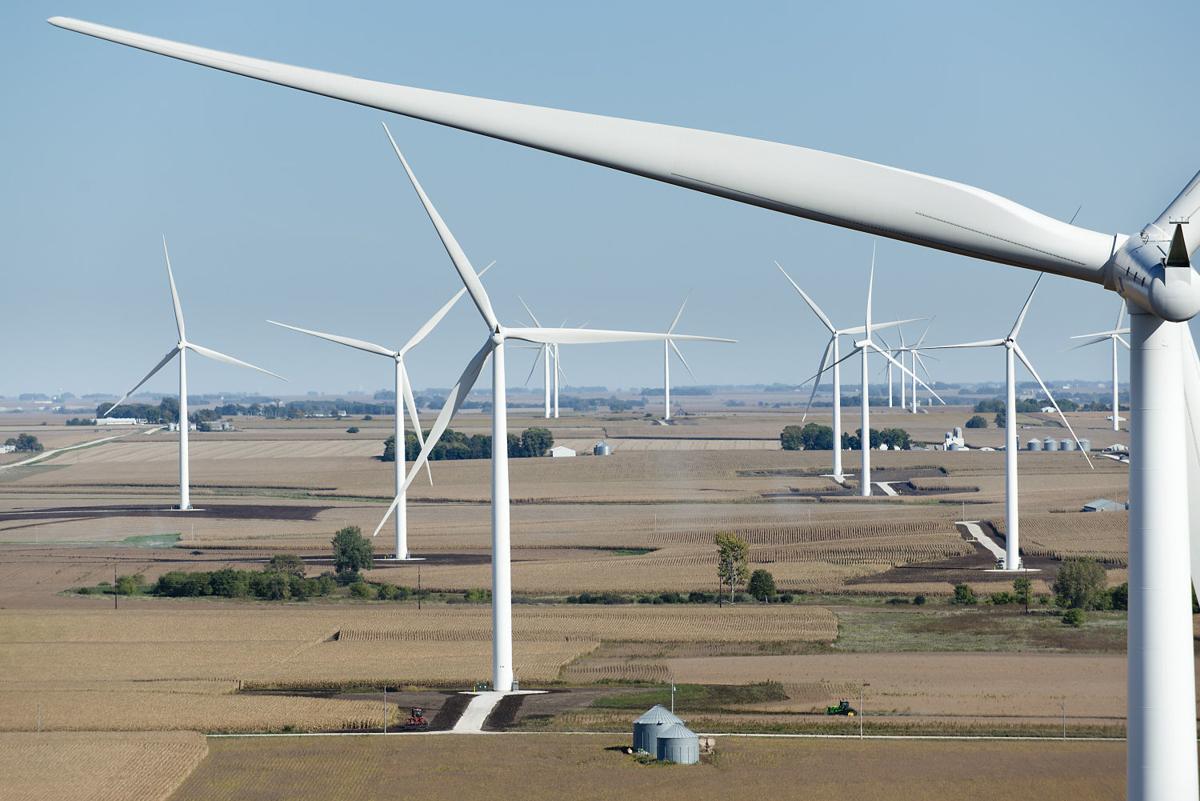 Wind turbines in the Highland Wind Farm in O'Brien County near Primghar, Iowa, are shown in October 2015. The sound of rotating turbine blades does not have a negative effect on a person’s health, according to new report by the Iowa Policy Project. 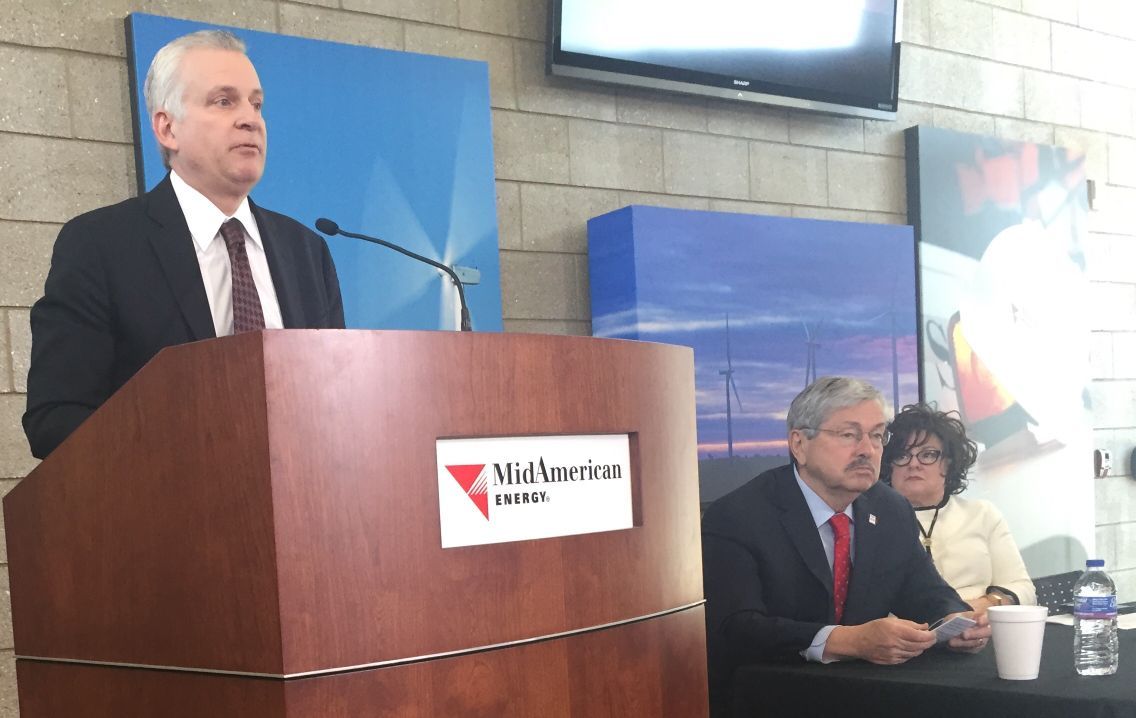 Bill Fehrman, president and CEO of MidAmerican Energy, announces a proposed $3.6 billion wind turbine project during a news conference Thursday at the Iowa State Fairgrounds. With him for the announcement are Iowa Gov. Terry Branstad and Iowa Economic Development Authority director Debi Durham.

DES MOINES | MidAmerican Energy plans to add 1,000 wind turbines in Iowa, a project that the company says will cost a record $3.6 billion and move it closer to providing 100 percent renewable energy to its customers.

MidAmerican CEO Bill Fehrman, joined by Iowa Gov. Terry Branstad and state economic development director Debi Durham, announced the proposed project Thursday at a news conference in a building at the base of a wind turbine at the Iowa State Fairgrounds.

The project, which Branstad said would be the largest economic development project in Iowa’s history, must be approved by the state utilities board.

"Our company has a very bold dream to some day deliver 100 percent renewable energy to our customers," Fehrman said. "We know it’s the right thing to do, and we know it’s critical to take this giant step forward."

Locations for new wind farms were not announced. Northwest Iowa has been a common site for previous MidAmerican projects.

In December, the 214-turbine Highland Wind Farm in southern O'Brien County was completed and placed in service.

Two more wind farms, O'Brien Wind Farm, which will have 104 turbines in the northern part of the county, and Ida Grove Wind Farm in Ida County, which will have 134 turbines, are expected to be finished by the end of the year. Both projects are "full-speed ahead," and contractors are moving into those sites now, Fehrman said.

Fehrman said he could not say if other Northwest Iowa sites are being considered for the new project because negotiations with Iowa landowners are ongoing, though he hinted that the region would get a close look.

"Clearly you have good wind up there, and that obviously plays in your favor," he said in an interview later Thursday.

Fehrman said the project would add 2,000 megawatts of wind energy in Iowa and will move the company to producing wind energy equal to 85 percent of annual customer sales. Once the wind farms in O'Brien and Ida counties are finished this year, MidAmerican will have 2,020 turbines in 23 Iowa counties with a generating capacity of 4,048 megawatts.

The project can be completed without additional cost to customers, as the entire $3.6 billion will be recouped through federal tax incentives over 10 years, Fehrman said.

He said that if the state utilities board approves the project by this fall, construction will begin next year and the vast majority of the project will be completed in 2017 and 2018.

Durham, a former Siouxland Chamber of Commerce president, praised the proposal as “audacious.”

More than 30 percent of Iowa’s electricity is generated by wind energy, the highest rate in the nation.

Praise for the proposed project also poured in from other organizations and elected officials, including the state’s senior U.S. senator, who authored the federal tax incentive for wind energy projects.

"The potential for wind energy in Iowa and the nation looks endless," U.S. Sen. Chuck Grassley said in a statement. "I’m grateful for the latest investment in the people of Iowa."

Added U.S. Rep. Dave Loebsack in his own statement, "I am pleased this investment will bring more jobs for our highly skilled workforce, as well as create additional homegrown and affordable energy sources."

The Sierra Club, which advocates for natural resources and the environment, also praised MidAmerican for its investment in renewable energy.

"MidAmerican made clean energy history today," Bruce Nilles, senior director for Sierra Club’s "Beyond Coal" campaign, said in a statement. "Iowa and MidAmerican’s rapid transition from dirty coal to affordable wind offers a game-changing new model for how utilities will reach 100 percent renewable energy more quickly than anyone would have predicted."

Rain, storms to start next week

SIOUX CITY | Windy but calm weather will finish the week, but thunderstorms are in store for the beginning of next week.

Pierce between Fifth and Sixth to close Monday afternoon

SIOUX CITY | The streets between Pierce and Fifth Street to Sixth Streets will be closed for “A Cowboy, Comedian and Country Music,” event Mon…

PRIMGHAR, Iowa | Driving north on U.S. Highway 59 into Primghar, dozens of wind turbines appear on the horizon in every direction.

LE MARS, Iowa | The San Diego-based company planning to build a wind farm in rural Plymouth County will have to jump over several hurdles to o…

ESTHERVILLE, Iowa | Two new wind farms are in the final planning stages in Dickinson and Emmet counties as a result of a new high-voltage tran…

PELLA — Dan Houston, president and CEO of Principal Financial Group, called it “a big deal” and something that is “imperative” the state accomplish.

Wind turbines in the Highland Wind Farm in O'Brien County near Primghar, Iowa, are shown in October 2015. The sound of rotating turbine blades does not have a negative effect on a person’s health, according to new report by the Iowa Policy Project.

Bill Fehrman, president and CEO of MidAmerican Energy, announces a proposed $3.6 billion wind turbine project during a news conference Thursday at the Iowa State Fairgrounds. With him for the announcement are Iowa Gov. Terry Branstad and Iowa Economic Development Authority director Debi Durham. 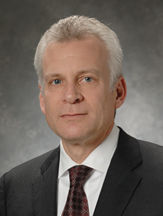 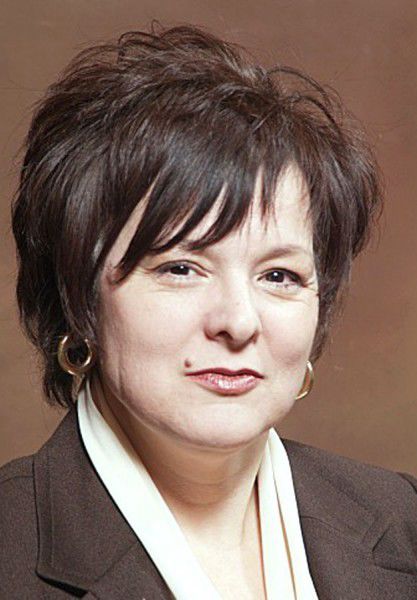