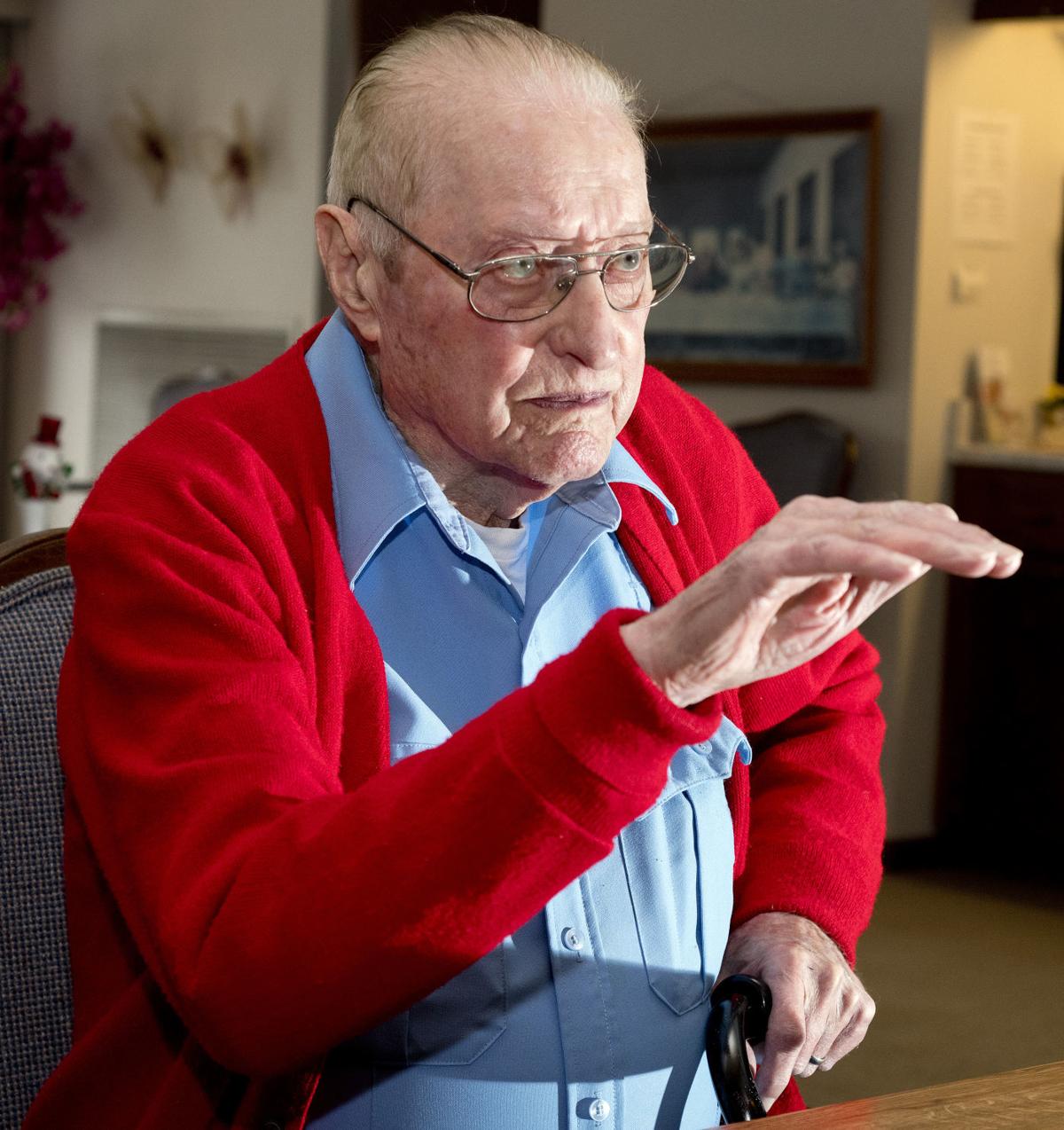 World War II veteran John Hendrix, of Sioux City, talks about his experiences while serving in the U.S Navy after the Pearl Harbor attack. Age 15 when Pearl Harbor was attacked on Dec. 7, 1941, Hendrix said he and a friend who heard about the bombing on the radio wanted to join the Army that day to fight. 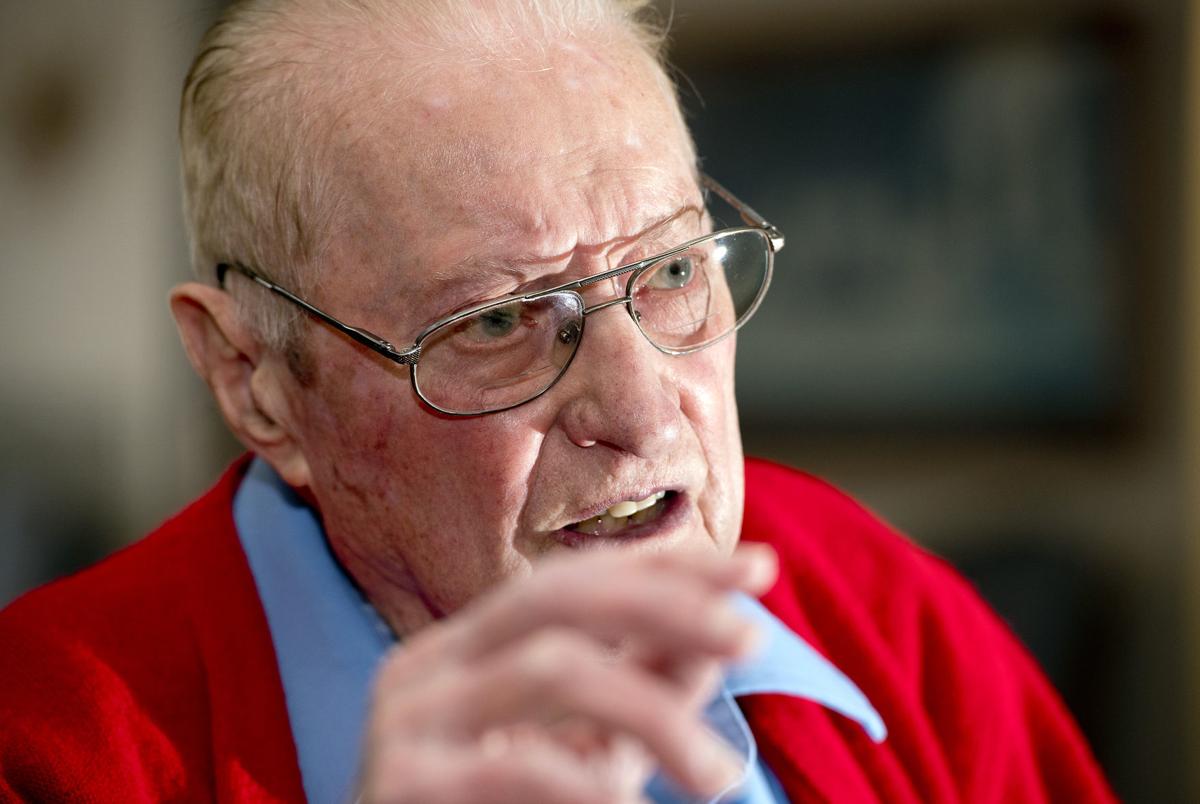 World War II veteran John Hendrix talks about his experiences while serving in the U.S Navy shortly after the Pearl Harbor attack. He served on the USS Kidd, a destroyer named after a USS Arizona officer killed during the attack.

SIOUX CITY -- Like many of his generation, the news of the attack on Pearl Harbor remains vivid in John Hendrix' memory.

Now 92 years old, he remembers Dec. 7, 1941, and can recall his reaction when hearing radio reports about the Japanese attack on the U.S. fleet anchored in Hawaii. He wanted to enlist in the military right then and there and fight back.

"Me and my buddy, we wished we were in the Army. We were 15 years old," Hendrix said.

They were too young to serve at that time, but Hendrix would get his chance soon enough.

Born and raised in Tennessee, Hendrix said he left home at age 17 to work in a shipyard in Georgia to learn how to be a sheet metal mechanic.

"I stayed there at the shipyard until I was drafted," he said. "I knew when I got 18 I'd be drafted. I got a notice from my draft board."

Today marks the 77th anniversary of the attack on Pearl Harbor, an event that drew the United States into World War II. The two waves of Japanese planes that swept over Pearl Harbor and surrounding airfields left 2,343 U.S. servicemen and 68 civilians dead and another 1,143 wounded.

After the attack was over, six U.S. battleships were either sunk or destroyed along with several other ships. Dozens of Navy and Army Air Corps planes were destroyed.

When Hendrix entered the Navy in April 1944, he wasn't bent on revenge for the attacks, but he soon saw some of the rebuilding still taking place more than two years later.

Once Hendrix had completed boot camp, he sailed from Newport News, Virginia, to Pearl Harbor, to await further orders.

"There was still evidence of the attacks," he said of Pearl Harbor's condition when he arrived there. "The Navy was putting in sidewalks and the Army was doing this and that."

After about two weeks, Hendrix was assigned to the USS Kidd, a destroyer named for Rear Adm. Isaac C. Kidd, who died on board the battleship USS Arizona, which exploded and sank to the bottom of Pearl Harbor during the Japanese attack.

The USS Kidd had just returned from fighting in the Pacific Ocean and soon rejoined it.

Hendrix was assigned to one of the ship's 5-inch guns, but at 130 pounds, he wasn't big enough to handle the 80-pound shells, he said. He was reassigned to the chief's quarters, where he served the ship's commanding officers.

"I wore the phones. I knew everything that was going on," he said.

After a stop in Fiji, the USS Kidd sailed to the Philippine Islands, where it took part in the battle of Leyte Gulf, one of the largest naval battles of World War II. Hendrix remembers being on the ship's deck and watching American invasion forces land.

"We sat in the harbor and bombarded the beaches," he said.

Once the battle was over, the USS Kidd escorted American ships to New Guinea to pick up more troops. While returning to the Philippines, the USS Kidd received orders to return to the United States for maintenance. Back in the United States, Hendrix was transferred to land duty and served the remainder of the war at a naval base in Bremerton, Washington, before his discharge in April 1946.

After his discharge, Hendrix went to Odessa, Texas, where he drove trucks. He had a cousin in Sioux City, and moved here in 1964 to be a trucker for Holdcroft Trucking. Hendrix spent 36 years as an over-the-road trucker before retiring.

ANNAPOLIS, Md. -- After nearly two years spent working to give the USS Sioux City and her crew a commissioning celebration they'd never forget…

SIOUX CITY -- Most of us would count ourselves fortunate to have a career that we enjoy and are successful in.

ONAWA, Iowa -- Remains of a U.S. sailor born in Onawa who died on the battleship USS Oklahoma during the attack on Pearl Harbor have been identified.

LE MARS, Iowa -- As a young man, Robert Dull desired a career in the Army judiciary.

SIOUX CITY -- When he was taking out the trash and mowing the grass at his father's Sioux City law office, Dan Vakulskas never really envision…

World War II veteran John Hendrix, of Sioux City, talks about his experiences while serving in the U.S Navy after the Pearl Harbor attack. Age 15 when Pearl Harbor was attacked on Dec. 7, 1941, Hendrix said he and a friend who heard about the bombing on the radio wanted to join the Army that day to fight.

World War II veteran John Hendrix talks about his experiences while serving in the U.S Navy shortly after the Pearl Harbor attack. He served on the USS Kidd, a destroyer named after a USS Arizona officer killed during the attack.