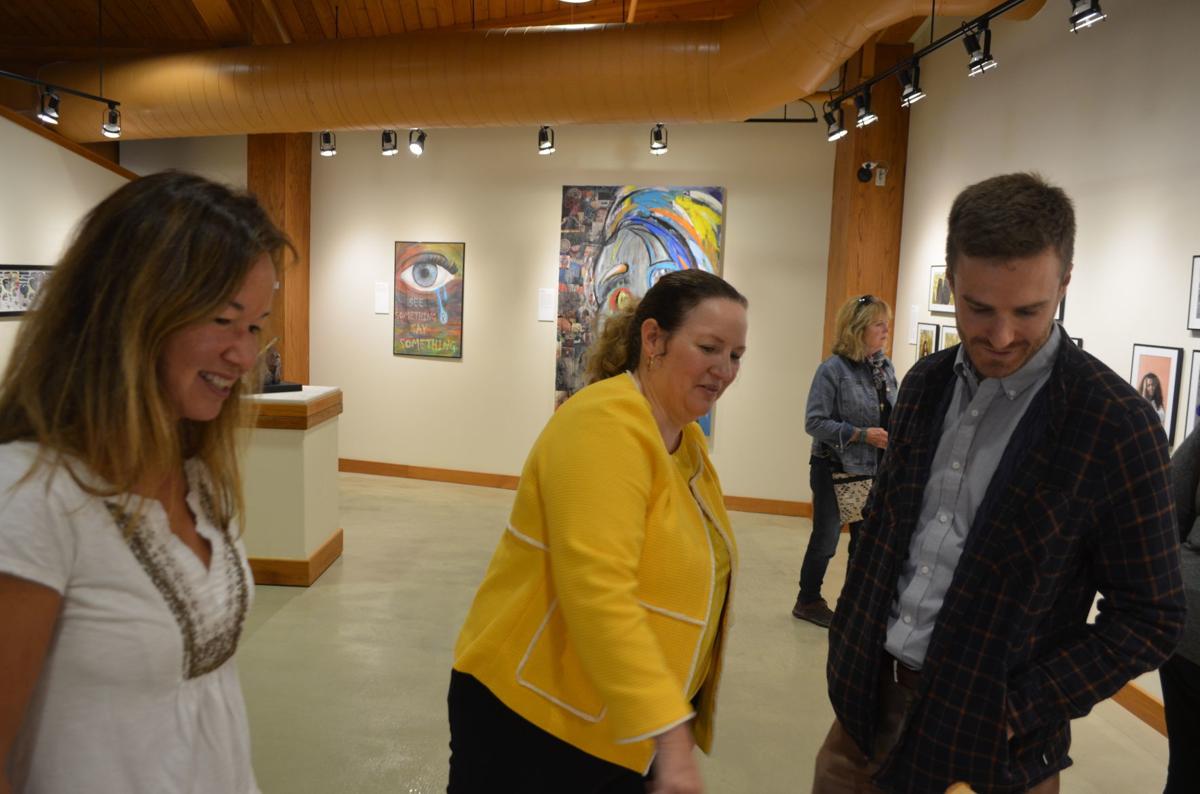 Philippa Hughes, left, talks with Vicky Wilkins and Dan Wallace at a new exhibit at the Betty Strong Encounter Center that asks, "What does it mean to be an American?" The three represent organizations that worked to bring the project to Sioux City. 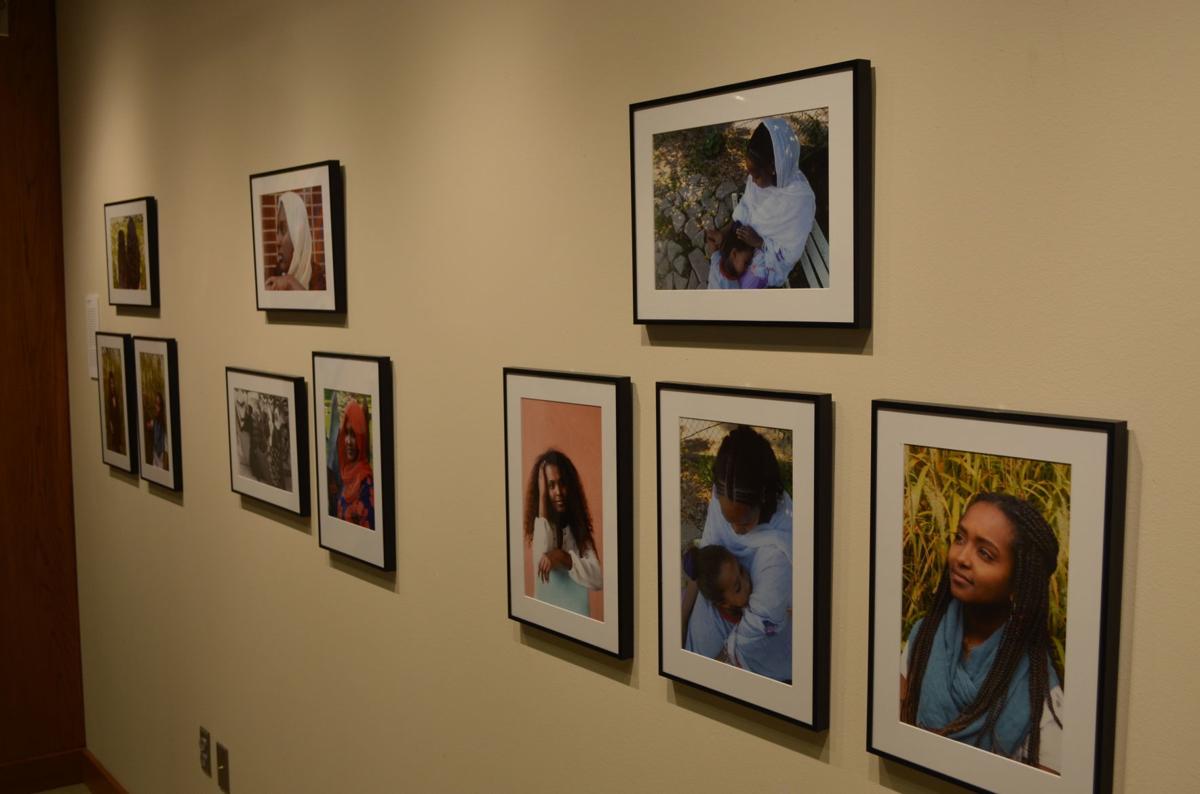 A series of photos of immigrant women by Christine McAvoy is shown on exhibit at the Betty Strong Encounter Center Sunday. The photos are part of the "Looking for America: Siouxland" project, which asks, "What does it mean to be an American?"

SIOUX CITY -- A new art exhibit at the Betty Strong Encounter Center encourages visitors to engage in a discussion about immigration and what it is to be an American.

The project, "Looking for America: Siouxland" asks guests, "What does it mean to be an American?" Local artists were invited to bring in works that speak to the theme in one form or fashion.

The exhibit will be on display for the remainder of this year. The exhibits range from a watercolor of senior citizens enjoying a concert to a series of photos of local immigrant women, to an abstract portrait of a Native American and an abstract print depicting "the expansion of the information sector."

Sioux City, he said, was one of the smaller and more-conservative communities to host the project.

"We wanted to have a mix of different kinds of communities, so geographic diversity, more urban, more rural, red state, blue state," Wallace said. "If you look at all these places, you know, Detroit's on the Canadian border, El Paso's on the Mexican border, here we're kind of in the middle of the country, Alaska is sort of the frontier."

A dinner was held Sunday evening at Chris Larsen Park, and attendees were asked to bring a personal item that relates to the theme and share a personal story with fellow guests.

"That way people all get to know each other on a personal level before they have a conversation that can get more into the politics of the immigration issue," Wallace said.

Philippa Hughes, another organizer affiliated with the group Curiosity Connects Us, says she wants to bring people from across the ideological spectrum to the Encounter Center to discuss immigration. Changing minds is not really the point; it's getting people to talk to one another.

Vicky Wilkins, the dean of the school of public affairs at American University in Washington and another organizer, said she harbors the hopes for bridging the partisan gap.

"Our big push is to increase civil discourse, to get people talking again," she said.

One of the artists, Sioux City photographer Christine McAvoy, displayed a series of photos of immigrant women she knows through a young immigrant women's mentoring group that she runs with Sister Mary Day. Taking portraits of the women was long a goal for McAvoy.

"I just found them to be very intriguing, grounded human beings, and when I initially started asking them if I could take their pictures, they were just like, 'No, why would you want to do that?'" McAvoy said. "It took me a while to build up some trust."

Brian Joel Damon brought an abstract painting of a Native American to the exhibit. Though his family has roots in the U.S. dating back to around 1650, he said he empathizes with the immigrant experience.

"When they arrived here in America from England, the Native American population had been here hundreds and hundreds and hundreds of years," he said. "My family was an immigrant (family), in a different sense at that point in time, but we were. We were coming and trying to fit in and make a life for ourselves."

Even more remarkable: She has been deaf since childhood but uses other parts of her body to absorb the music and create. Saturday, she opens the Sioux City Symphony Orchestra season with a program that demonstrates how she is able to mesh with orchestras and, as she says, "make music for the moment."

SIOUX CITY -- "Looking for America," a locally-sourced exhibition motivated by the notion that art can inspire dialogue and engagement across …

Philippa Hughes, left, talks with Vicky Wilkins and Dan Wallace at a new exhibit at the Betty Strong Encounter Center that asks, "What does it mean to be an American?" The three represent organizations that worked to bring the project to Sioux City.

A series of photos of immigrant women by Christine McAvoy is shown on exhibit at the Betty Strong Encounter Center Sunday. The photos are part of the "Looking for America: Siouxland" project, which asks, "What does it mean to be an American?"