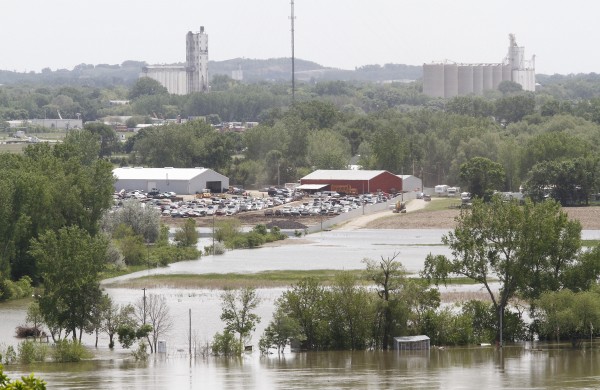 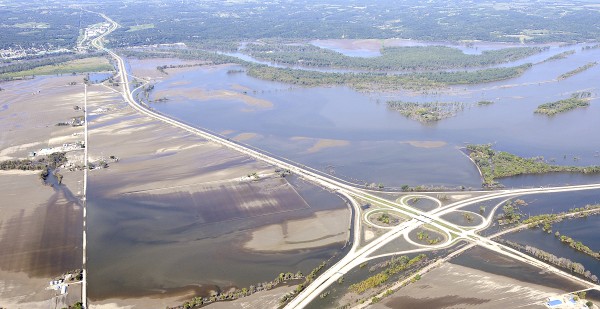 Missouri River flood damage to Interstate 680 near Crescent, Iowa, is shown in this aerial photograph made Sept. 6 near the road's intersection with Interstate 29, looking toward North Omaha.

Eddie Smith, an attorney involved in the suit, said he believes that from 2004 through 2006, the corps changed its river management priority from flood control to restoration of fish and wildlife habitat along the river.

That change, Smith said, has caused flooding in areas that hadn't had problems for decades. It's also largely to blame for the massive flood of 2011.

"The truth of the matter is they made changes to their annual operating plan that changed storage practices, changed release practices and changed flow management practices," Smith said. "We believe they knew that when they made these changes for habitat for the public good, they knew that flooding would occur."

Maggie Oldham, a spokeswoman in the corps' Omaha office, said the corps does not comment on pending lawsuits.

Polsinelli Law, a national firm based in Kansas City, Mo., is currently recruiting people to join the lawsuit, which Smith said could be filed as early as March in the U.S. Court of Federal Claims in Washington, D.C. The law office will be conducting informational meetings Monday in Onawa, Iowa, and Tuesday in Dakota City.

Smith said the corps' actions violate the U.S. Constitution's Fifth Amendment, which requires the government to pay just compensation for private land taken for public use.

Smith said the corps is essentially taking farmland along the river to establish wildlife habitat and not paying the landowners for it. It's similar, he said, to the government not paying a homeowner whose land is taken for construction of a highway.

"This isn't about wrongdoing or mismanagement," Smith said. "If you take the land, you have to compensate for it."

Scott Olson, a Tekamah, Neb., farmer and farm machinery consignment business owner, has recruited friends and neighbors to join the lawsuit. The 2011 flood submerged 500 acres of his cropland. Olson said he still has 20 acres under 6-7 feet of sand. Production has yet to return to the 200-bushel-per-acre corn yields prior to the flood.

"This land is really strange. I've got potholes in fields that will not drain," Olson said. "Everything I thought I knew about farming I've had to throw away."

Smith said his firm is seeking hundreds of clients from St. Joseph to Yankton, S.D., and damage claims will reach into the hundreds of millions of dollars.

The 2011 flood caused billions of dollars in damage from Montana to Missouri. The corps attributed the flooding to record amounts of rainfall that fell in Montana and North Dakota at the same time record snowpack was melting in the Rocky Mountains. The unprecedented runoff levels overwhelmed the six Missouri River reservoirs, leading to record water releases from the corps' dams.

In December 2011, a four-member independent panel of hydrology and water management experts concluded the corps had done all it could in response to the record rainfall and runoff.

Smith contends that 2011 flood and other flooding that's occurred since 2007 could have been prevented had the corps not begun emphasizing habitat restoration. Some of landowners taking part in the suit have had damage from two or three floods in that time.

Another St. Joseph law firm announced a year ago that it planned to sue the corps on behalf of landowners and municipalities that had sustained flood damage in 2011. That suit never was filed. Nancy Potter, an attorney involved in that action, did not return a phone call seeking comment Wednesday.

The city of Sioux City did not join in that lawsuit.

South Sioux City initially planned to be a party, but the City Council later changed its mind and withdrew. City Administrator Lance Hedquist said he had not heard about the new lawsuit.

"We'll take a look at it once we find out about it," he said.

WHAT: Representatives of a St. Joseph, Mo., law firm will be conducting information meetings about a flooding lawsuit it plans to file against the U.S. Army Corps of Engineers. Landowners who have been flooded by the Missouri River since 2007 are invited to attend.

WHEN: 7 p.m. both Monday and Tuesday.

A federal lawsuit filed by 187 landowners along the Missouri River is challenging the Army Corps of Engineers on floodwater policies.

OMAHA | Runoff into the upper Missouri River basin could near record levels for the month of October, but managers of the river's reservoirs e…

South Sioux City officials have changed their minds and will not join a class-action lawsuit against the federal government seeking compensation for 2011 Missouri River flooding.

A Missouri law firm plans to sue the U.S. Army Corps of Engineers on behalf of landowners and municipalities that sustained damage in the 2011 Missouri River flood.

KANSAS CITY, Mo. | The U.S. Army Corps of Engineers has had no shortage of critics in its management of the Missouri River and the system of d…

Scientists find explanation as to why pandas are so fat

Scientists find explanation as to why pandas are so fat

Avenatti and Stormy Daniels face off in court

Avenatti and Stormy Daniels face off in court

Missouri River flood damage to Interstate 680 near Crescent, Iowa, is shown in this aerial photograph made Sept. 6 near the road's intersection with Interstate 29, looking toward North Omaha.