With a number of new developments having sprung up since 2005, Ragen Cote, executive director of Downtown Partners, said the previous wayfinding system was outdated. Wayfinding, or directional signage, is described as "direction for people in motion."

"When wayfinding isn't accurate, people just don't trust it, so they're not looking. That was one of the things that really needed updating in downtown," Cote said.

A few years ago, Roger Brooks, a placemaking expert, visited Sioux City and presented his findings through the eyes of a tourist. Brooks targeted the downtown wayfinding system as a "must do" for the community, according to Cote.

Since then, Downtown Partners, the Siouxland Chamber of Commerce and the city have partnered to move the wayfinding project forward. Cote said hundreds of community members, groups and businesses have been involved in the design process, which was led by Corbin Design. Design services were provided by JDG Creative and installation was completed by Siouxland Signs.

"We're going to see a lot more development in downtown that's going to inspire more walk-ability. When you get out of your car and see something like this, you're able to understand what's around you," Cote said.

"What we've ended up doing, just due to funding, is we've split the project into two phases. One was pedestrian and one was for cars," Cote said. "Pedestrian is the one that got done first to help people as they're walking downtown."

Cote said bids for the vehicular piece of the project, which is the most expensive, were recently received. She said the City Council will be asked to award a contract to the lowest bidder in the next couple of weeks.

"The vehicular side of things is more of a citywide based system," Cote explained. "It takes a little bit of our history. You'll see some of the steer heads in the design. You'll see a lot of golds and terra cotta colors that you would see in downtown."

Each traffic signal box is wrapped using an image of how that intersection once looked and a map that shows the current location and identifies businesses within a two-block radius.

"I think these are really fun. They're colorful. They're bright. You notice them," Cote said. "We can change those out every year. As businesses change, as things change downtown, those can come off and be put right back on very inexpensively."

Have you ever been lost in downtown Sioux City? Visit siouxcityjournal.com/polls to participate in our online poll.

What's your favorite thing to do or see in downtown Sioux City? Sound off at facebook.com/SiouxCityJournal

Earlier this year, Nelson Construction & Development purchased the six-story 1920 building for $350,000 with the goal of redeveloping it into market-rate residential apartments and main-floor commercial space.

A police official said the council could choose to collect speed data and issue speeding tickets at intersections with existing cameras, as some Iowa cities do, and/or install cameras at three more intersections.

The project includes the renovation of the 2,180-square-foot existing pool house facility and the construction of a 300-square-foot storage building and staff break area.

Lamb Arts to get 2 more years to repay loan

Downtown Partners executive director Ragen Cote and a handful of volunteers from Earl May Garden Center, know the exact location of each and every one of 51 concrete pots.

Ragen Cote, executive director of Downtown Partners, said 51 building murals have been painted in Sioux City since 2017 and more are in the works. 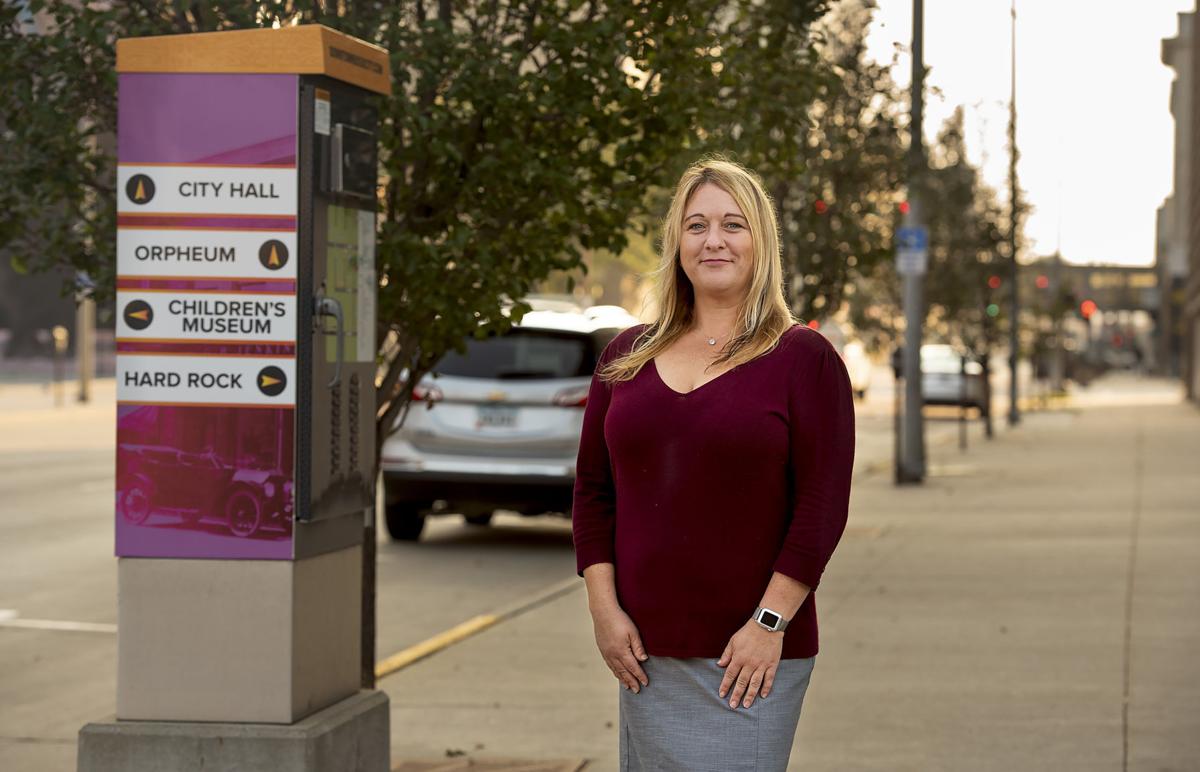 Ragen Cote, Downtown Partners executive director, stands at a wayfinding map on a signal box at the corner of Fifth and Pearl streets in downtown Sioux City in this September 2020 file photo. The signage was created to help people find points of interest in the city's downtown. 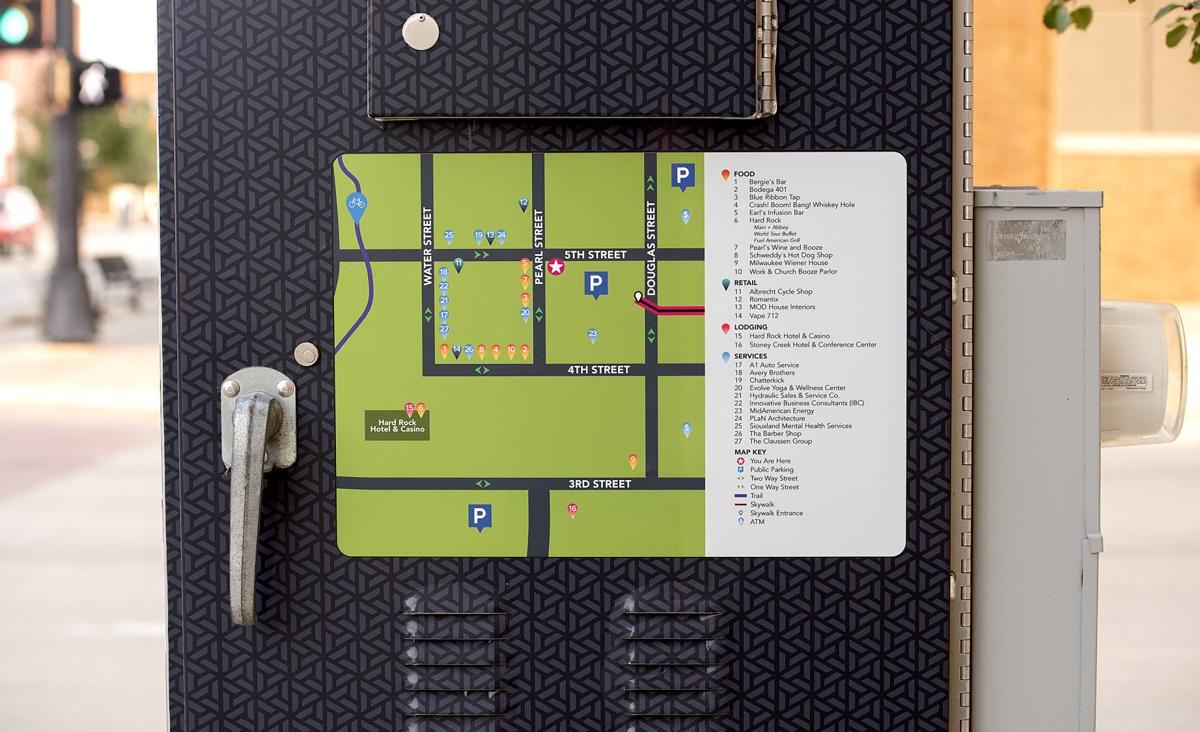 A wayfinding map is shown on a traffic signal box at the corner of Fifth and Pearl streets in downtown Sioux City in this September 2020 file photo. 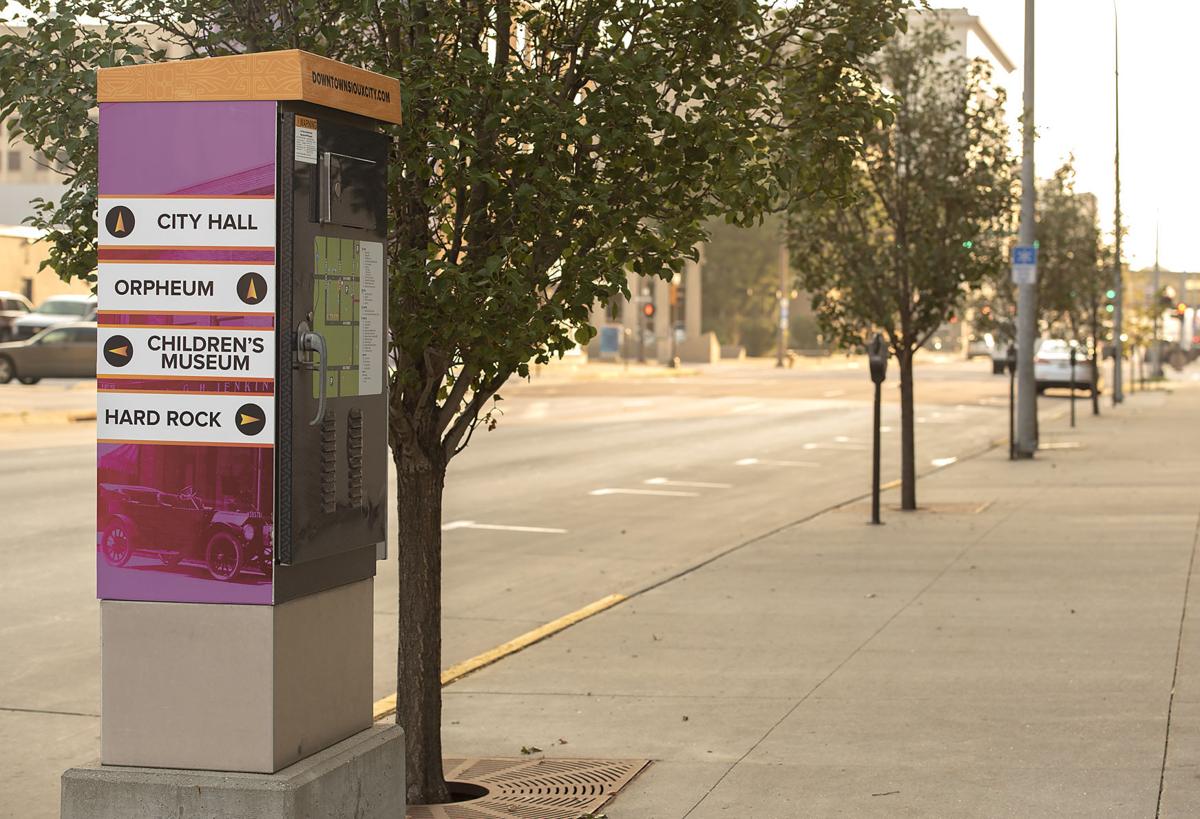 Sioux City's downtown has a new wayfinding system. Wayfinding, or directional signage, is described as "direction for people in motion."